Upset with newspaper, US gunman kills 5 in newsroom shooting

A white man with a long-standing grudge against a newspaper in the United States city of Annapolis massacred five people, four of them journalists, as he blasted his way through its newsroom with a shotgun and smoke grenades in what police say was a 'targeted attack'. 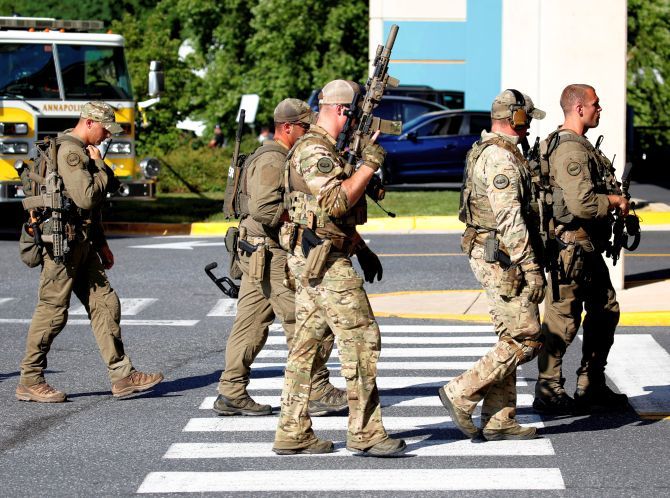 The shooting at the Capital Gazette newspaper in Annapolis, Maryland, nearly 50 km from Washington, that also injured three others, was the deadliest day for US journalism since 9/11 terror attacks.

The shooter identified as Jarrod Warren Ramos, 38, was on Friday charged with five counts of first-degree murder.

Ramos had previously filed a defamation suit against the newspaper in 2012, court records show.

"This was a targeted attack on the Capital Gazette. This person was prepared today to come in. He was prepared to shoot people. His intent was to cause harm," Anne Arundel County Deputy Police Chief William Krampf said at a news conference. 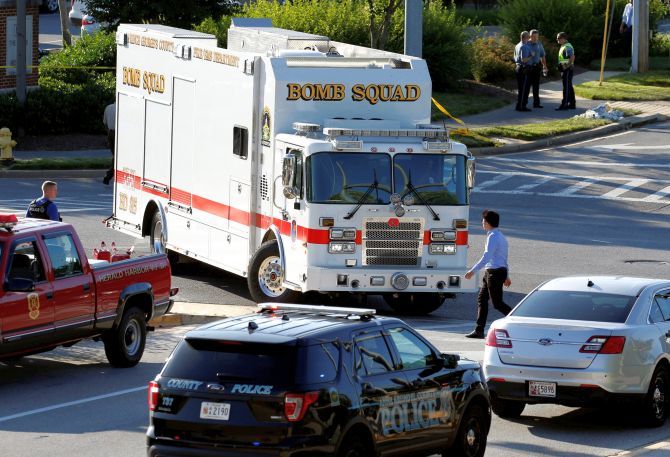 According to media reports, Ramos lost a defamation case he had brought against the newspaper over a 2011 column he contended defamed him.

The column provided an account of Ramos's guilty plea to criminal harassment of a woman over social media, the reports said.

A few hours before the shooting, a profane tweet was posted to a Twitter account under Ramos' name, specifically calling out the author of the appeals court opinion. 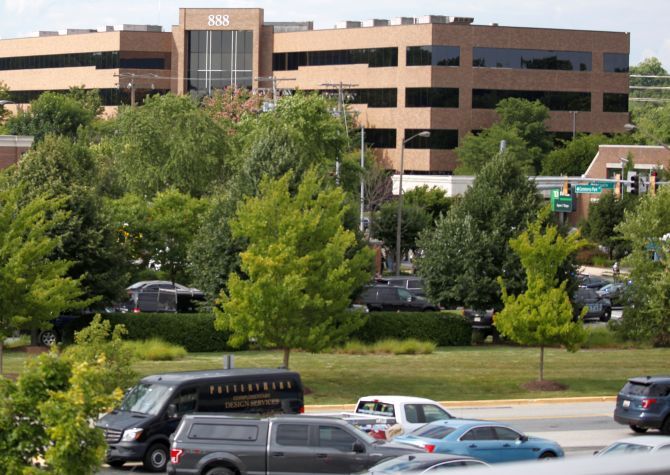 IMAGE: The building on Bestgate Road where authorities responded to the shooting. Photograph: Joshua Roberts/Reuters

Ramos was taken into custody at the scene and refused to cooperate with authorities. He carried no identification and had damaged his finger tips in an apparent effort to thwart identification by law enforcement, US media outlets reported.

Authorities resorted to using facial recognition software and comparing his face to databases of passports and driver's license photos.

County executive Steve Schuh said that the suspect was hiding under a desk in the building when police officers arrived at the scene. He said there was 'no exchange of fire'.

'My thoughts and prayers are with the victims and their families. Thank you to all of the First Responders who are currently on the scene,' President Donald Trump tweeted.

Asked about Trump's criticism of the press corps, White House Deputy Press Secretary Lindsay Walters said the president and his staff did not believe violence was acceptable in any situation, adding that 'we stand by that'.

Earlier, Phil Davis, the Gazette's crime reporter, had tweeted about the shooting.

'Gunman shot through the glass door to the (newsroom) and opened fire on multiple employees. Can't say much more and don't want to declare anyone dead, but it's bad,' Davis said. 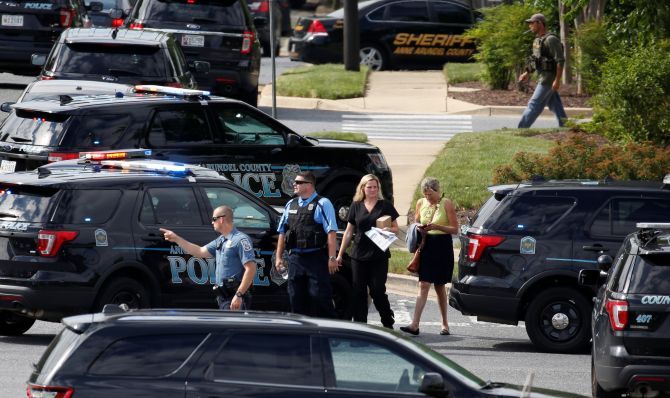 Democratic Leader Nancy Pelosi said in mass shootings and daily tragedies, the epidemic of gun violence has stolen too many lives for far too long.

"Congress has a responsibility to take action now to ensure that no other community or family must endure the unthinkable horror of gun violence. Every day it fails to do so is a stain on our country," she said.

Asserting that reporters should not have to hide from gunfire while doing their jobs, former Congresswoman Gabrielle Giffords, founder of the gun violence prevention organisation, said time and time again, those in the Congress had failed to show the courage needed to keep people safe.

"Americans are demanding that their lawmakers pass effective laws that can protect our communities and stop dangerous people from accessing guns, but this Congress refuses to listen. We should be outraged. And we should be making plans to hold them accountable," she said.

Media watchdog, Reporters Without Borders (RSF) said it was deeply disturbed to learn that a shooting at the Capital Gazette, had resulted in the death of five people.

"Is what happened in the Capital Gazette newsroom in Annapolis, Maryland, the equivalent of the Charlie Hebdo killing or of the last bombing against journalists in Kabul?" said RSF Secretary general Christophe Deloire. 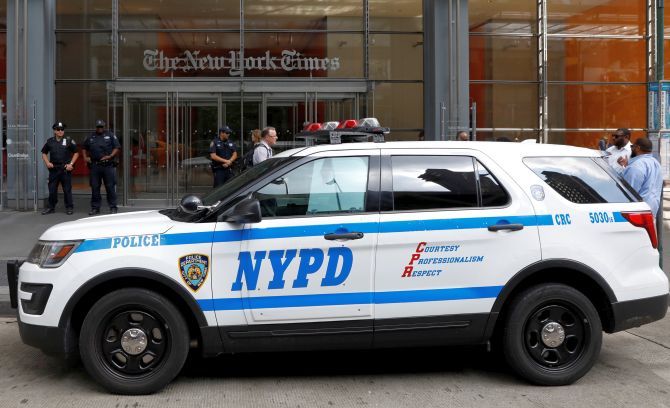 In any case, this is a new tragedy for journalism, which is the victim of increasing violence globally, even in democracies, he said.

"It is deeply saddening to learn of this shooting happening in a local newsroom in the US. RSF strongly condemns this act of violence, and any such acts against journalists," Deloire added.

"We expect a quick and thorough investigation into this tragedy," said Margaux Ewen, Director of RSF's North America bureau.

"Yet another tragedy in Annapolis and it won't be the last unless we do something. Far too many people are hiding in closets, under their desks, in their places of work, worship, and in schools. This must stop," he said.

"My heart is with Capital Gazette and all the victims and families affected," Khanna said.

The Committee to Protect Journalists tweeted that before the Maryland shooting, seven journalists had been killed in the US in relation to their work since 1992.

The last incident was reported in 2015 when TV reporter Alison Parker and cameraman Adam Ward were killed during an interview in Moneta, Virginia.

Meanwhile, as a precautionary measure, security was tightened outside media offices across the US.