45 killed after bus falls into river in Shimla 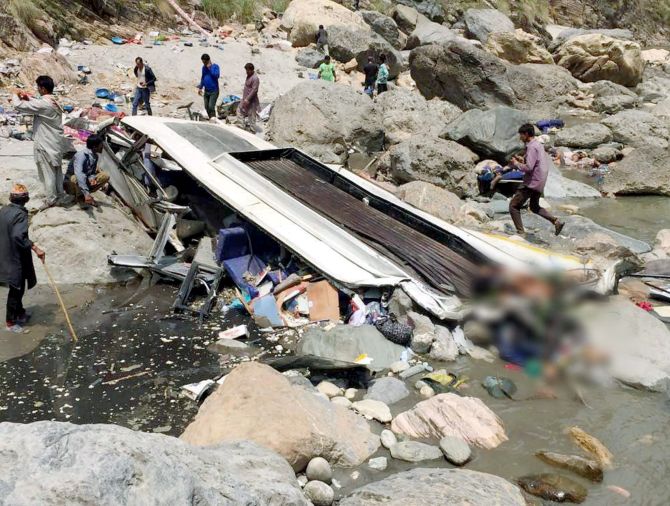 Forty-five passengers were killed when a private bus plunged into River Tons in remote Nerwa area of Shimla district of Himachal Pradesh on Wednesday.

The passengers were on their way from Vikasnagar in Uttarakhand to Tuni and the mishap took place on the Uttarakhand-HP border in Himachal territory, Deputy Commissioner Shimla, Rohan Chand Thakur said.

"Going by the version of the conductor, who was one of the two survivors, we presumed that the number of passengers was 46 but now 45 deaths have been confirmed," he said.

According to reports received earlier, 56 passengers were believed to be travelling in the ill-fated bus.

Locals, however, said the death toll could mount as some bodies might have been washed away in the river.

Meanwhile, Chief Minister Virbhadra Singh expressed profound shock and grief over the accident and conveyed his sympathies to bereaved families.

He has directed the local administration to make arrangements for sending the bodies to the home of victims after postmortem.

Prime Minister Narendra Modi expressed anguish over the loss of lives in the mishap and announced ex gratia of Rs 2 lakh for the next of kin of each of those killed.

"Extremely anguished by the loss of lives due to the bus accident in Himachal Pradesh. Condolences to the families of the deceased," he said.

He also announced Rs 50,000 for each of those seriously injured in the bus accident. 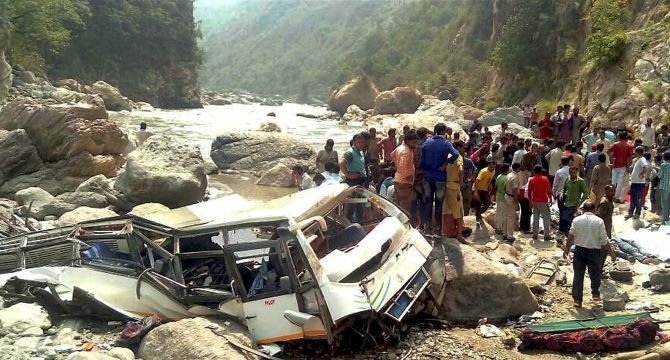 There were more than 47 passengers in the bus and bodies of 45 victims have been recovered while two persons including the conductor, who jumped out of the bus, survived, the official said.

Twenty out of the 45 deceased have been identified and 12 among them hail from Uttarakhand while eight are from Himachal Pradesh.

The conductor who fled from the spot was later caught by locals and handed over to the administration.

Shimla Superintendent of Police, D W Negi said all 45 bodies have been recovered and sent for postmortem.

The locals immediately started the rescue operations, even as the spot was initially inaccessible, and later district administration's rescue teams also joined the operation.

The Deputy Commissioner also announced immediate relief of Rs 50,000 to the next of kin of the deceased.

Rescue teams from Uttarakhand and a team of NDRF also reached the spot to lift the bodies, he said.

The conductor is being questioned to ascertain the cause of the accident, the official said.