Seven Indo-Tibetan Border Police jawans died and 32 security personnel were injured when the bus in which they were returning from Amarnath Yatra duty fell into a deep gorge in the Pahalgam area of Jammu and Kashmir, a police official said. 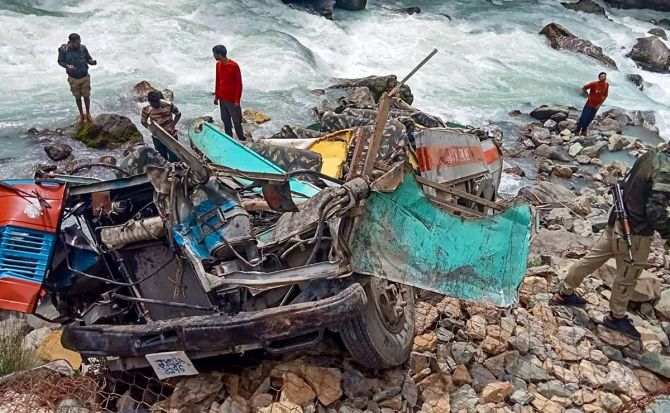 IMAGE: Rescue work underway after a bus carrying 39 personnel (37 from ITBP and 2 from J-K Police) skidded off a road down to a riverbed, near Chandanwari, in Anantnag district on Tuesday, August 16, 2022. Photograph: PTI Photo

The bus, carrying 37 ITBP personnel and two policemen, was on its way to the police control room here from Chandanwari, he said.

While two ITBP personnel died on the spot, five others succumbed to their injuries later, the officials said.

The condition of eight of the injured is stated to be critical.

They have been evacuated to Srinagar for specialised treatment.

The remaining injured are being treated at the Anantnag district hospital.

Earlier, the official had said that one of the seven deceased was a policeman.

However, later he said, "It was a case of mistaken identity. The two policemen are undergoing treatment."

President Droupadi Murmu and Vice President Jagdeep Dhankhar condoled the loss of lives in the accident.

'The tragic loss of precious lives of ITBP personnel in the unfortunate accident at Anantnag, J-K fills me with sadness. My heartfelt condolences for the bereaved families. I pray for speedy recovery of the injured,' Murmu tweeted.

'Saddened by the loss of lives of Indo-Tibetan Border Police (ITBP) personnel in a bus accident ... My thoughts are with the bereaved families in this hour of grief. My prayers for the speedy recovery of the injured,' a tweet by the Vice President's Secretariat quoted Dhakhar as saying.

Lieutenant Governor Manoj Sinha said all possible assistance is being provided to the injured security personnel.

'Deeply anguished by the bus accident near Chandanwari in which we have lost our brave ITBP personnel. My condolences to the bereaved families and prayers for the speedy recovery of the injured,' Sinha tweeted.

The news of a bus carrying ITBP personnel falling into a gorge in Pahalgam in Jammu and Kashmir is very saddening, Gandhi said in a tweet in Hindi.

'I wish the injured jawans a speedy recovery and peace to the souls of the martyred and express my deepest condolences to the bereaved families,' the former Congress chief said.

'... I send my condolences to the families & colleagues of the brave ITBP jawans killed in an accident in Pahalgam today. A number of ITBP personnel have been injured. I send my best wishes for their speedy & complete recovery,' he said.

Banerjee said, 'Deeply pained to learn about the tragic accident in Pahalgam whereby our nation lost several brave ITBP jawans & police personnel. I offer my heartfelt condolences to the families and loved ones of our jawans. Praying for the speedy recovery of those who were injured on duty.'