Till noon, 25 per cent of the electorate had cast its vote in the second phase of polling 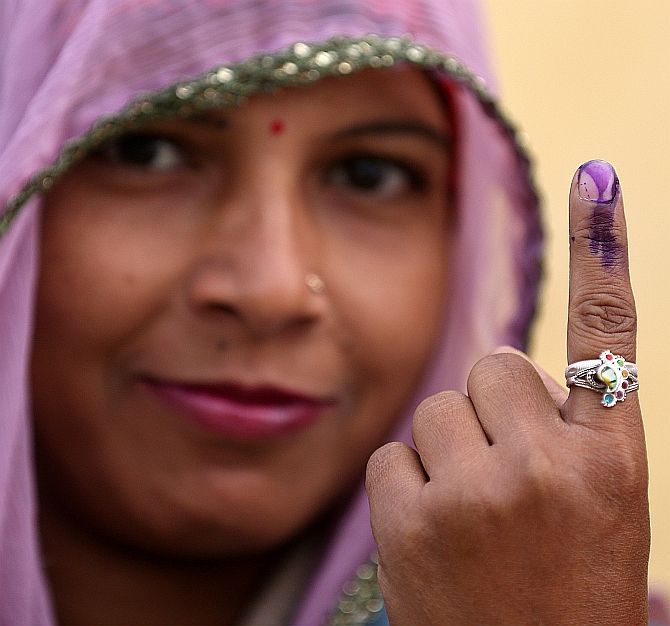 An impressive turnout of over 65 per cent was recorded in 67 assembly constituencies across 11 districts of western Uttar Pradesh, figuring in the second phase of the crucial state polls on Wednesday.

A total of 2.28 crore voters, including over 1.04 crore women, are eligible to cast their ballots in 14,771 polling centres and 23,693 polling stations in the second of the seven-phase polling.

The CEO office said the average turnout was over 65 per cent in these seats.

-- UP Phase II: A test of minority outreach At certain places, long queues were seen outside polling stations. First time voters were seen enthusiastic, taking selfies and proudly showing off the indelible ink imprint on their fingers.

Muslim women clad in burqas were seen outside several booths, while the photograph of a newly married couple going to cast vote in Bareilly went viral on social media.

In the present phase, 721 candidates, including 62 women are in the fray. The maximum candidates (22) are from Barhapur (Bijnor) and a minimum of four nominees from Dhanaura (Amroha). Elaborate arrangements were made for free and fair polling with deployment of 51,771 police constables, 52,598 homeguards, 5,397 sub-inspectors and 3,666 head constables to maintain law and order. The Election Commission has barred political parties and candidates from publishing advertisements in newspapers on Wednesday and Thursday without its approval. The poll body has asked them to get the advertisements pre-certified from the Media Certification and Monitoring Committee at the state and district levels before their publication.

The Commission said the decision was taken in view of past instances of advertisements of "offending and misleading nature" in print media on such occasions, which vitiate the elections.