The search operation launched to trace at least 14 labourers, trapped in an illegal coal mine in Meghalaya's East Jaintia Hills district, resumed on Wednesday after it took a hit due to strong winds and heavy rains, police said. 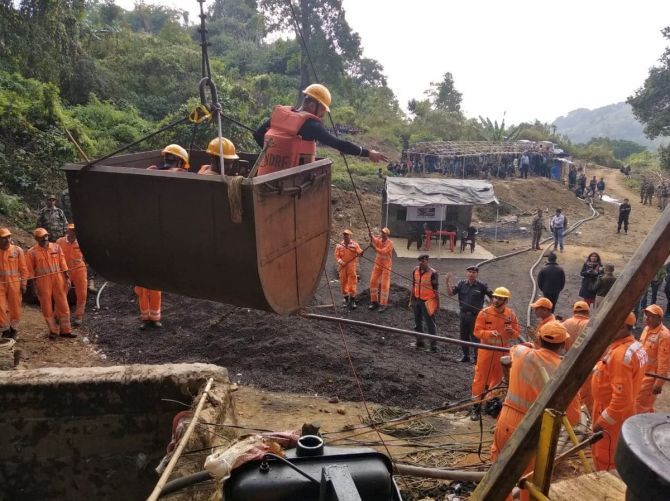 The labourers were reportedly trapped on December 13 after water from nearby Lytein river had gushed into the illegal rat-hole mine at Ksan area Lumthari village, a senior official said.

The exact number of labourers trapped inside the pit could not be ascertained as the mine owners did not maintain a logbook, a top police officer said.

They are now feared dead as water from a nearby river has been gushing into the 370-feet-deep pit.

Incessant rainfall affected Tuesday's operations as the road leading to the mine was not accessible, the officer said.

National Disaster Response Force assistant commandant, S K Singh said, "We need to pump out 500 gallons of water per minute to drain out water from the mine."

Two pumps could be put into service to flush out water from the mine and authorities were planning to use more pumps as there was no sign of dip in the water level. Tests have also confirmed that the acidity of the water in the river and the mine is the same though it could not be known from which point the water was entering the mine, Singh said.

One person, identified as Krip Chullet, has been arrested so far pertaining to the case. He was allegedly involved in hiring labourers, overseeing the work and sending them down the shaft.

The Meghalaya government on Monday sought the Union home ministry's help to rescue the miners.

The NDRF teams, which are involved in the rescue operation, along with the Meghalaya Disaster Response Force, have suggested the district administration to ask the Oil Natural Gas Corporation to deploy submersible water pumps to reduce the water level.

The Meghalaya Human Rights Commission on Tuesday initiated suo motu action against the state government and issued a notice for an enquiry into the incident. 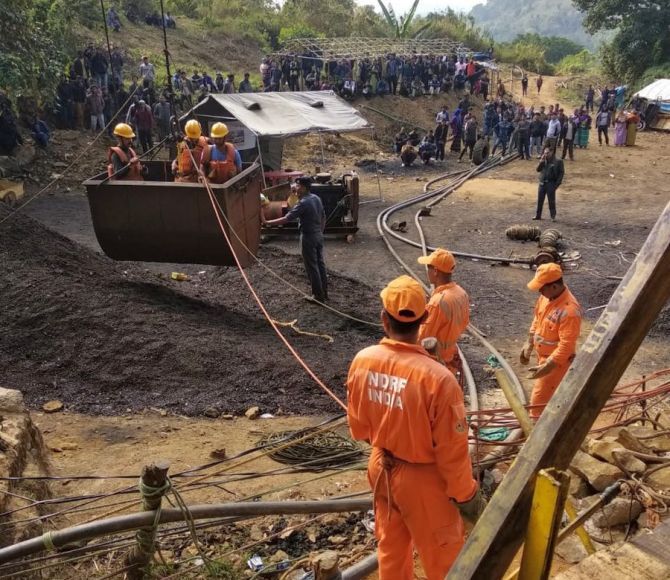 Aldous Mawlong, secretary of the Human Rights Commission, said that a notice has been issued to chief secretary Y Tsering to cause an effective enquiry into the entire matter and submit a detailed report within 30 days.

The commission has also filed a suo motu case against the Meghalaya government seeking compensation for the trapped miners, he said.

Justice Aftab Hussain Saikia, chairperson of the commission, has taken strong exception to the fact that illegal mining has been continuing in the state despite NGT ban, Mawlong added.

In 2014, the National Green Tribunal had imposed a ban in Meghalaya on rat-hole coal mining, a technique that entails digging small vertical pits to reach the mineral pockets.