Salman's co-accused actors -- Saif Ali Khan, Sonali Bendre, Tabu and Neelam – were acquitted in the 20-year-old case.
The actor has been lodged in the same barrack as godman Asaram Bapu and has been given prisoner no. 106 in Jodhpur Central Jail. 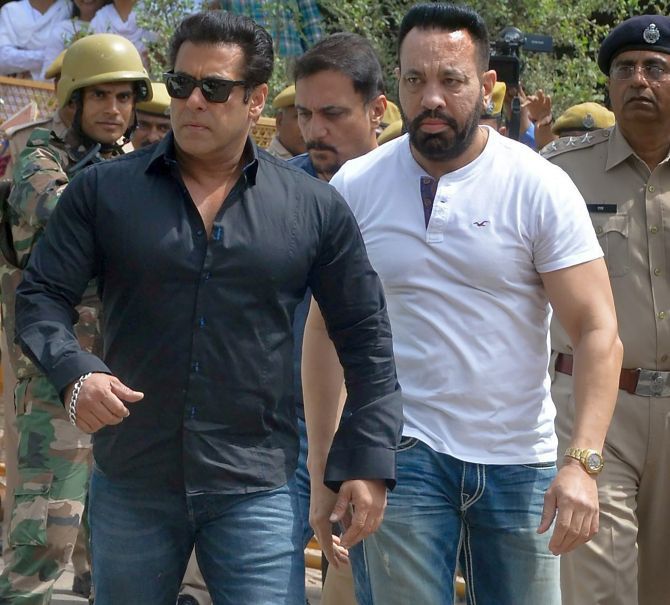 IMAGE: Actor Salman Khan arrives at the court with his bodyguard Shera for the hearing. Photograph: PTI Photo

A court on Thursday convicted Bollywood actor Salman Khan and sentenced him to five years in prison for killing two blackbucks, capping a 20-year-old case that began with a late night safari outside Jodhpur on the sidelines of a film shoot.

The court in Jodhpur acquitted other actors Saif Ali Khan, Tabu, Neelam and Sonali Bendre and a local, Dushyant Singh, giving them the 'benefit of doubt' for the incident in October 1998.

Besides attracting attention due to Salman's popularity, the case also caught the nation's imagination because it was the first time that five actors were involved in one single case.

'The accused is a popular actor whose deeds are followed by people. Despite this, the accused hunted two blackbucks,' said Chief Judicial Magistrate Dev Kumar Khatri in his written judgment.

The verdict, however, triggered a deluge of sympathy from colleagues for Salman, whose career and personal life have been peppered with controversies, including a manslaughter charge in a hit-and-run case that is still pending.

"I feel bad. He should be given relief. He has done a lot of humanitarian work," actor-politician Jaya Bachchan told reporters outside Parliament in New Delhi, adding that the punishment was harsh. 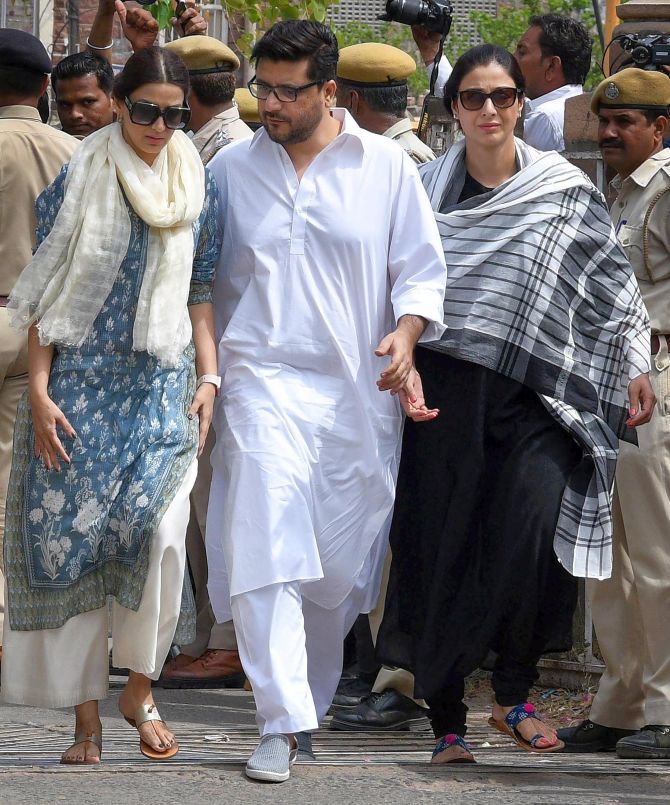 Since morning, media crews, hundreds of stargazers and security personnel swarmed the court premises waiting for Salman and the other accused to show up.

Large crowds armed with phone cameras lined up along the 2-kilometre route from the court as the 52-year-old was whisked away in a Bolero police jeep to spend a night in the Jodhpur Central Jail.

Within hours, social media was awash with photographs of Salman, dressed in a black shirt and jeans, entering the jail.

Animal rights activists welcomed the sentencing, and some said Salman should have been given the maximum punishment under the Wildlife Act.

"We are happy that justice has prevailed and a serial offender is behind bars. The judiciary has once again proved that the popularity of the accused has no bearing on the case before the court,"said Gauri Maulekhi of People For Animals.

As the sentence is more than three years, Salman will have to appeal in a higher court for bail.

His lawyer, Anand Desai, said the sessions court will hear the appeal for suspension of the sentence/bail at 10.30 am on Friday.

Salman has consistently denied shooting the two deer, as claimed by the prosecution. Jail sources said Salman was lodged in barrack number 2 in a heavily protected and secure cell. He would have to spend at least one night in the jail until his bail hearing on Friday.

This is Salman's fourth stint in the Jodhpur Central Jail, which also houses religious preacher Asaram Bapu, who has been accused of rape. He had earlier spent a total of 18 days in the jail in 1998, 2006 and 2007, all for cases of poaching.

As per Jail superintendent Vikram Singh, multiple layers of security have been put in place for the actor in the jail, and he has been lodged has been kept in ward no. 2, adjacent to the cell of Asaram.

Singh, while briefing the media, said Salman would be treated as a normal prisoner and no special treatment would be given to him.

"Salman Khan has been given number 106 and is lodged in ward number 2. He was made to undergo a medical test and has no medical issues. He has not made any demands. We will give him jail uniform tomorrow (Friday). Multiple-layer security has been put up for his ward," the DIG said on Thursday, hours after Salman was taken to jail following his conviction.

The DIG said the actor was served with chana dal (split chickpeas), cabbage, and chapati for the meal.

Sources, however, said the Bollywood icon did not eat the jail food.

He will have a simple wooden bed, a rug and a cooler in his cell, Singh said.

Final arguments in the blackbuck case were completed in the trial court on March 28.

In his verdict, Khatri also imposed a Rs 10,000 fine after finding him guilty under Section 9/51 of the Wildlife (Protection) Act, which prescribes a maximum punishment of six years behind bars.

The actor is alleged to have shot and killed the blackbucks in Kankani village near Jodhpur on the night of October 1, 1998 during the shooting of the film Hum Saath Saath Hain.

Blackbuck, from the antelope family, is an endangered animal and included in the schedule-I of the Wildlife (Protection) Act-1972.

According to prosecution lawyer Mahipal Bishnoi, the actors were in a Gypsy that night with Salman in the driving seat. He spotted a herd of blackbucks and killed two of them, Bishnoi says. 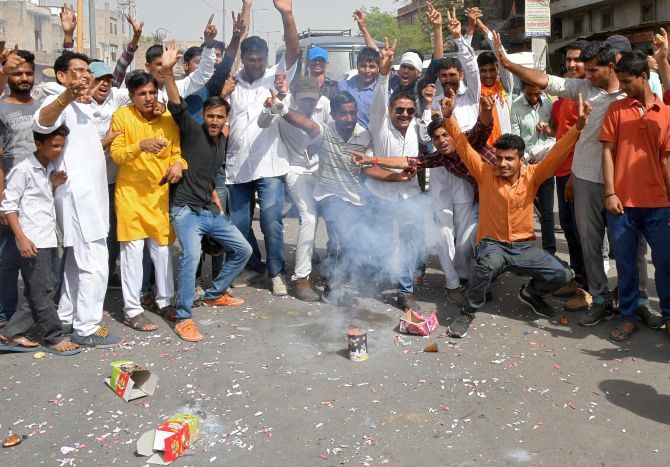 IMAGE: Members of the Bishnoi community celebrate after Salman Khan was found guilty in the blackbuck poaching case. Photograph: Stringer/Reuters

However, Salman's lawyer said that the fact that the court has acquitted all the five co-accused, 'would imply that Salman was out hunting alone in the middle of the night in a remote area outside Jodhpur'.

All the accused, some of them accompanied by their family members, were in the courtroom when the verdict was read out.

Salman's friends in the industry expressed concern over the verdict with some saying the actor was punished harshly for his star-status.

'I am extremely shocked,' director Subhash Ghai, who has worked with Khan in several films, tweeted.

Neelam's husband, actor-director Samir Soni, said he was happy for his wife, he believed Salman had been targeted for his star status.

"I have mixed emotions right now... It is a 20- year-old ordeal. I don't know why Salman was singled out. It seems his (star) status has come in the way," Soni told PTI.

Members of the Bishnoi community, mainly found in Western Rajasthan and known for their reverence for nature and wildlife, however, said justice had been done.

The case was under the national spotlight on Thursday with the media monitoring every development, his legion of fans tuned into social media and television and trade analysts watching anxiously to know the fate of the star who has an estimated Rs 600 crore riding on his next ventures -- Race 3, Bharat and Dabangg 3.

Salman also had a jail stint in Mumbai when he was also involved in a hit and run. His white Toyota Land Cruiser allegedly crashed into American Express Bakery at Hill Road at Bandra in Mumbai, killing one person and injuring four on September 28, 2002.

He was acquitted in the case but the Maharashtra government has filed an appeal.

The road to Salman's conviction 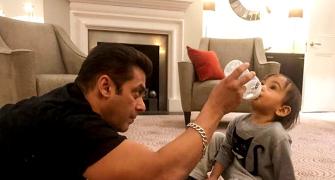 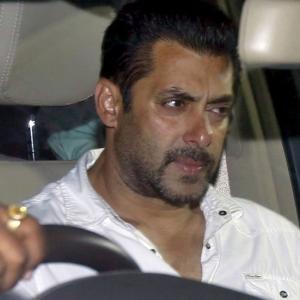 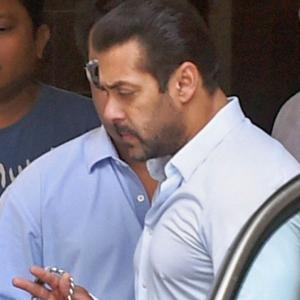