Stray incidents of violence continued to be reported in Kerala, which turned into a war zone over the entry of women of menstruating age in Sabarimala temple, on Friday with rampaging protesters hurling crude bombs and stones in various places. IMAGE: A police officer wields his stick against the members of Kerala Students Union, the student wing of the Congress party, outside a police station during a protest in Kochi. Photograph: Sivaram V/Reuters

As many as 1,369 people have so far been arrested and 801 cases registered in connection with violent protests which were witnessed during the dawn-to-dusk hartal called by pro-Hindu outfits on Thursday, police said, adding that 717 people are now in preventive custody.

Crude bombs were hurled at the house of Malabar Devaswom Board member, K Sasikumar, at Perambra in Kozhikode in the early hours of Friday, the police said.

Similar explosives were hurled at a mobile shop in Adoor in Pathanamthitta, they said.

Four incidents, in which crude bombs were used, were reported in Kannur, a politically volatile district which is witness to frequent clashes between Communist Party of India-Marxist and Bharatiya Janata Party workers, and at least 200 people had been arrested, the police said, adding no one were injured in the incidents. A local BJP office in Kannur was set on fire by miscreants, they added.

A number of houses of the BJP and the ruling CPI-M activists were attacked and pelted with stones in Pathanamthitta, Kannur, Kozhikode and Thiruvananthapuram.

The hartal called by Sabarimala Karma Samithi, an umbrella organisation of pro-Hindutva groups, and the Antarrashtriya Hindu Parishad, to protest the entry of two women of reproductive age into the Lord Ayyappa temple in Sabarimala on Thursday had virtually brought the state to its knees. IMAGE: BJP workers hurls bricks and stones at the CPI office following their protest against the entry of two women of menstruating age into the Sabarimala temple of Lord Ayyappa, in Palakkad,. Photograph: PTI Photo

Hurling crude bombs and stones, members of fringe groups rampaged through the streets of the state, fighting pitched battles with police and political rivals, leaving scores of people injured, including three BJP workers in a knife attack.

Protest demonstrations by the BJP and Sabarimala Karma Samithi had turned violent at several places in Kozhikode, Kannur, Malappuram, Palakkad and Thiruvananthapuram.

Police had used batons and water cannons to break up the protests. We're not part of any agenda, say two women who entered Sabarimala The women who made history by entering Sabarimala 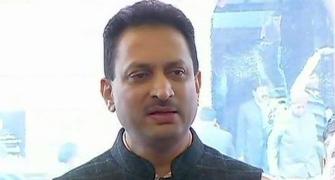 Kerala turns into war zone after women's entry into Sabarimala