Ahead of the India-China summit, Mahabalipuram, the ancient coastal town near Chennai, has been virtually turned into a fortress with unprecedented security arrangements while the beautification and other preparations touched a feverish pitch on Wednesday. 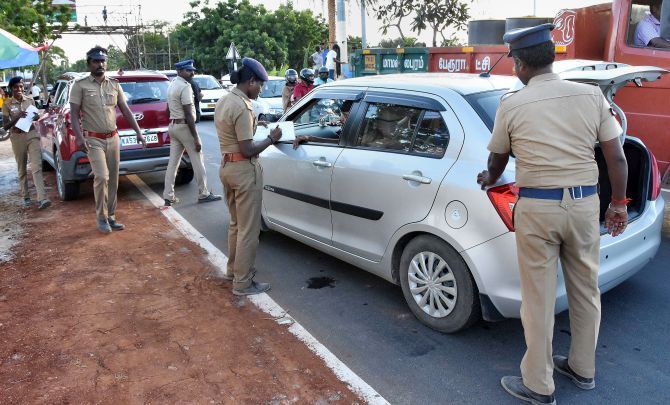 IMAGE: Security personnel conduct checking of vehicles, as a part of preparations ahead of the second informal summit between Prime Minister Narendra Modi and Chinese President Xi Jinping in the seaside temple town of Mahabalipuram. Photograph: PTI Photo

A Coast Guard ship is stationed off the Shore Temple and more than 5,000 police personnel, drawn from various parts of Tamil Nadu, have been deployed in and around the town and nearby places including the Old Mahabalipuram Road and the East Coast Road as part of security measures, police said.

Prime Minister Narendra Modi and Chinese President Xi Jinping will hold talks in Mahabalipuram on October 11-12 to deepen ties, including in the field of counter-terrorism in the second informal summit.

Reflecting the high levels of security requirement for the two top leaders, dozens of temporary police outposts have been set up in and around the town which will be under the watch of 800 CCTV cameras.

In control rooms, the town's roads, and access points to the shore are being monitored 24x7 while vehicle screening has been intensified. 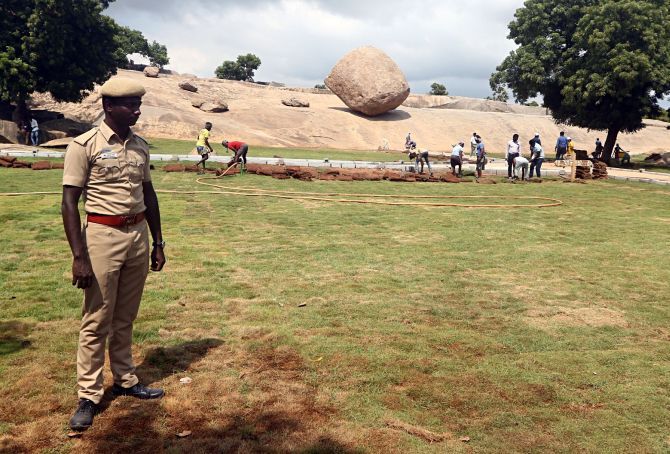 IMAGE: Security personnel stand guard at the famous site of Krishna's Butter Ball in Mahabalipuram where Prime Minister Narendra Modi and Chinese President Xi Jinping are set to meet. Over 5,000 policemen have been deployed at this seaside town. Photograph: ANI Photo

Barricades have been put up on the beach near the shore temple, one of the places to be visited by Modi and Xi, while a make-shift wall has been erected along its compound on the side where a string of shops are located.

The wall towering over the shops, which will remain shut, sported 'rangoli' art work in some stretches with the background painted in red colour.

Local fishermen have been asked to stay away from the sea from Thursday, officials said. 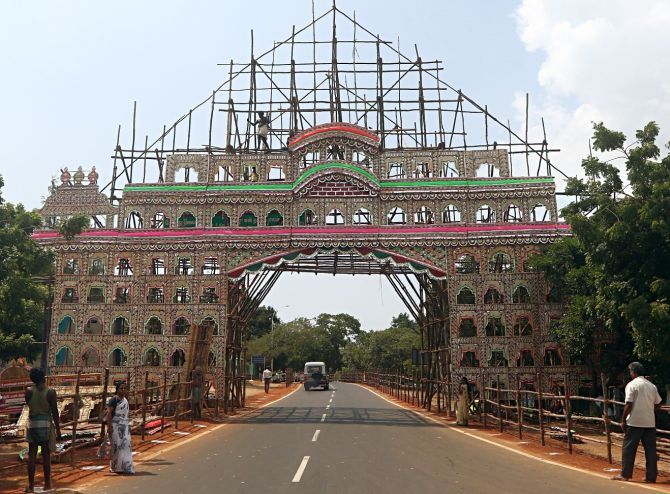 Plainclothesmen are swarming the town roads and the Inspection Bungalow is teeming with top state and police officials.

The Special Protection Group and bomb disposal squad personnel are "keeping all the areas including the group of monuments to be visited by the two leaders sanitised." 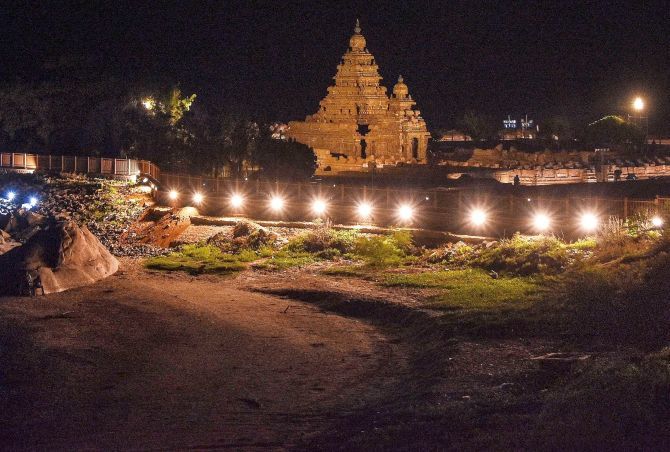 Over two dozen sniffer dogs have also been pressed into service as part of the security arrangements, police said.

The cleaning up and beautification work of the monuments and various other places entered the last stretch with the involvement of hundreds of civic, sanitary and other workers.

Workers are seen using high power air compressor based equipment to clean up the locations in and around the monuments. 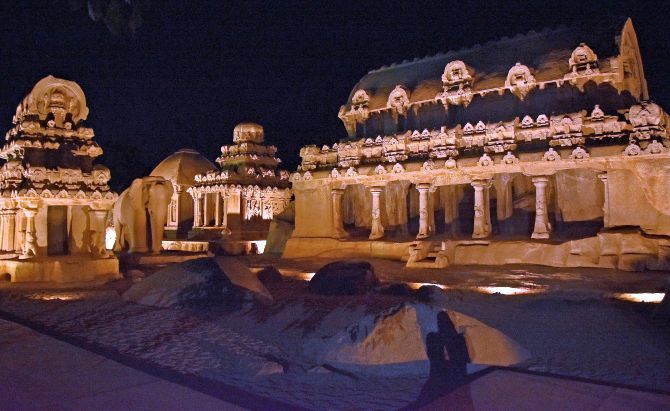 IMAGE: The cleaning up and beautification work of the monuments and various other places entered the last stretch with the involvement of hundreds of civic, sanitary and other workers. Photograph: PTI Photo

In a painstaking effort, scribblings made by visitors on various monuments were removed by the personnel of the chemical branch of the Archaeological Survey of India, officials said.

The entire coastal town has been dotted with around 100 ornamental lights while welcome arches have been erected at the entry point to the town.

Besides, banners with a red background and images of the two leaders posing with a smile neatly embossed will be placed in key locations, officials said. 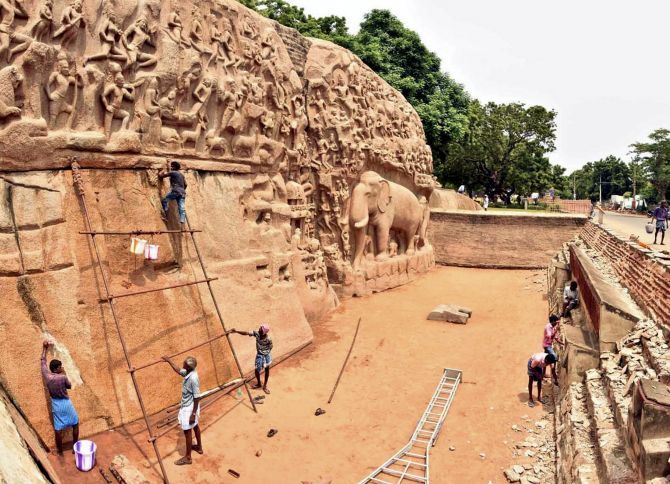 The welcome messages are in Tamil followed by Hindi and Chinese next.

The ongoing work by electricity employees to "fix cables underground" and refurbishing some power distribution installations has resulted in frequent power cuts in the past one week, locals said. 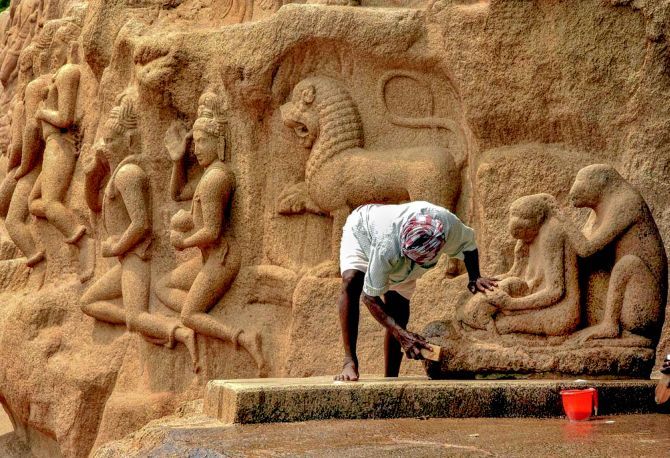 IMAGE: Scribblings made by visitors on various monuments were removed by the personnel of the chemical branch of the Archaeological Survey of India. Photograph: PTI Photo

Meanwhile, welcoming the summit, a national integration rally was organised on Wednesday with the participation of a large number of school children. Former union minister and BJP leader Pon Radhakrishnan inaugurated it. IMAGE: Workers carry a hoarding welcoming Modi and Jinping in Mahabalipuram. Photograph: PTI Photo
V Gangadharan
© Copyright 2022 PTI. All rights reserved. Republication or redistribution of PTI content, including by framing or similar means, is expressly prohibited without the prior written consent.