A group of artists held a protest in Mumbai on Saturday against the Citizenship (Amendment) Act by creating paintings around the theme of 'Save Constitution'. Some 90 artists from across the state, including Prakash Bhise, Sudharak Olwe, Prabhakar Kamble and Nandkumar Jogdand, created several canvas paintings against CAA.

Among the paintings which attracted the attention of the people who had gathered was a portrait of Ayesha Renna, a student who is widely seen as the face of the Jamia Millia Islamia anti-CAA protests. Crowds also thronged to other paintings depicting brotherhood, and those with anti-CAA and anti-NRC themes.

"We reject the CAA and the National Register of Citizens as these things are divisive and discriminatory in nature and against the core principles of the Indian Constitution," Bharat Shelke, executive president of Secular Movement said.

"As part of the protest, the artists brought canvasses, paints and brushes to express their anger against the CAA through paintings," he added. 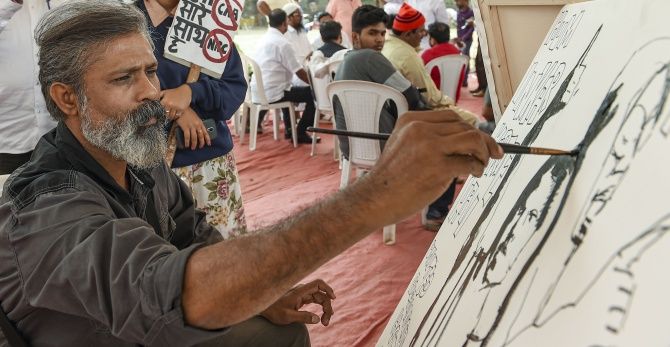 He said there is fear that due to this act, lakhs of people from backward class, nomadic tribe communities will be rendered "stateless".

President of the Secular Movement, Gautamiputra Kamble, said the act is dividing the nation. "We are against it...Several secular artists came together to create paintings against the Act as part of the protest," he said. Apart from the artists, several others, including students, took part in the protest, holding banners against the new legislation and the NRC.