Farmers and opposition parties in Tamil Nadu on Monday staged rail roko agitation at various places in the state demanding the Centre to constitute the Cauvery Management Board immediately. 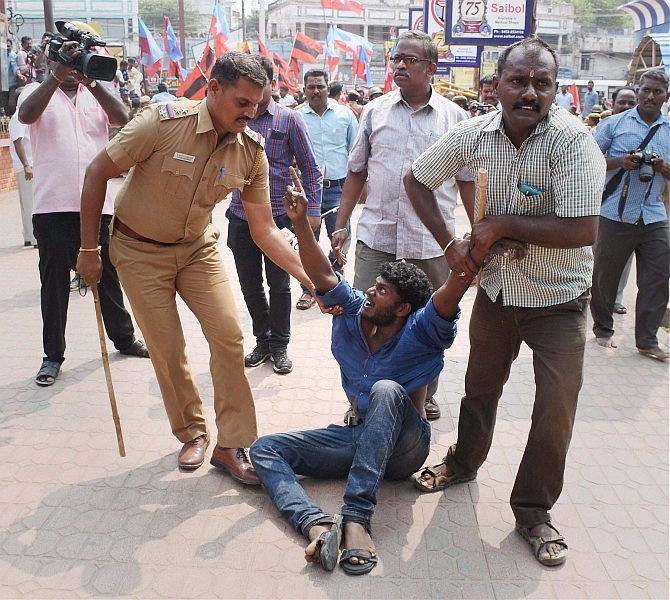 Police arrest a Peoples Welfare Front cadre during a protest over Cauvery issue in Madurai on Monday. Photograph: PTI Photo

The protests were held against the stance of BJP-led Union government in the Supreme Court which opposed immediate setting up of the Board.

Thousands of protestors participated in the rail roko demonstrations, who courted arrest and were lodged in the community and marriage halls, police said.

Ryots squatted on railway tracks with green turbans and planted paddy seedlings in the narrow gap between railway tracks. They managed to block trains briefly but were removed later by police. 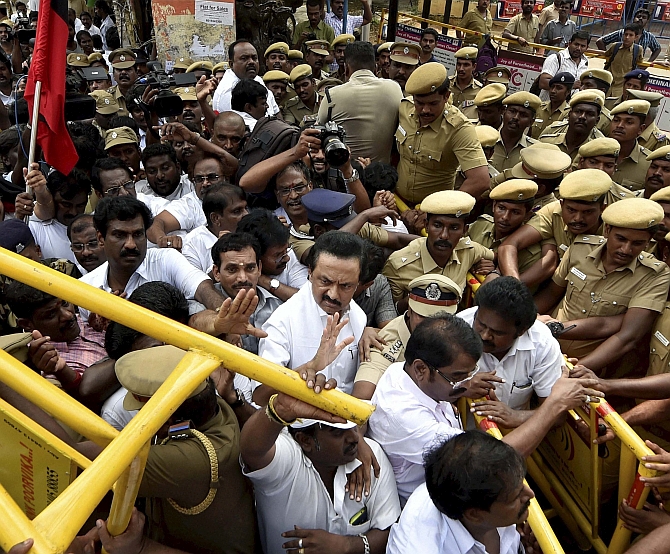 Police arrest DMK treasurer M K Stalin along with his party MLAs and functionaries at the rail roko protest demanding the constitution of a Cauvery management board at the Perambur Railway station in Chennai on Monday. Photograph: R Senthil Kumar/PTI Photo

"We will continue our stir. Tomorrow too this will be held. We plan to block Vaigai Super Fast Express. We urge the Centre to not make us paupers, (by adopting a stance against CMB)" Ayyakannu said.

Similar protests witnessed huge participation of people in the entire Cauvery Delta region of the state, including Tiruchirappalli, Thanjavur and Tiruvarur districts.

DMK treasurer and Leader of Opposition M K Stalin led the protest at Perambur suburban railway station in Chennai in which scores of his party legislators and functionaries took part.

Leading the protestors, he blocked a suburban train, following which he along with party cadres was taken away by police from the railway station. 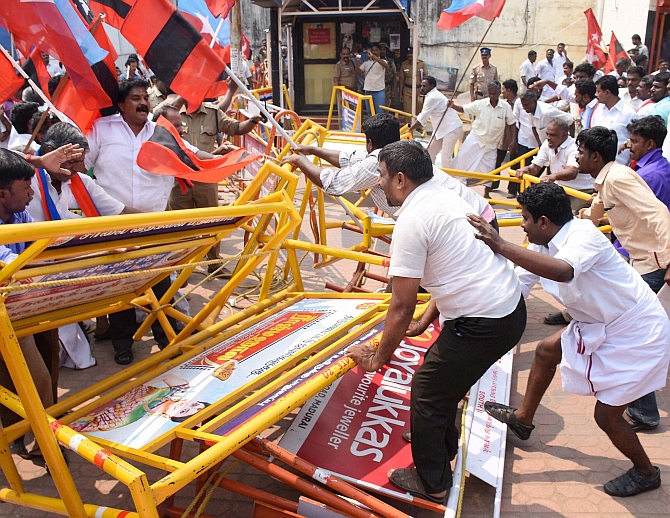 Vaiko told media persons that the stir was to protect the rights of Tamil Nadu on the Cauvery issue. Blaming the BJP regime at the Centre for having a "hidden agenda," to "support Karnataka," he said, it was being done for "political edge."

"Central government should come forward to withdraw their stand in Supreme Court against setting up CMB," Thirumavalavan said.

In some places, including Madurai and Cuddalore, police resorted to baton-charge to disperse a section of farmers and party workers who insisted on blocking train traffic.

Veteran CPI leader Nallakannu was detained at Virudhunagar near Madurai along with 300 others for blocking train.