Rahul vs Rajnath in Parl over Wayanad farmer suicide

Attacking the Modi government over the "suffering" of farmers, Congress leader Rahul Gandhi said it has given them no relief and wondered if it considered them "inferior" to businessmen who have been given concessions and loan waivers running into lakhs of crores. 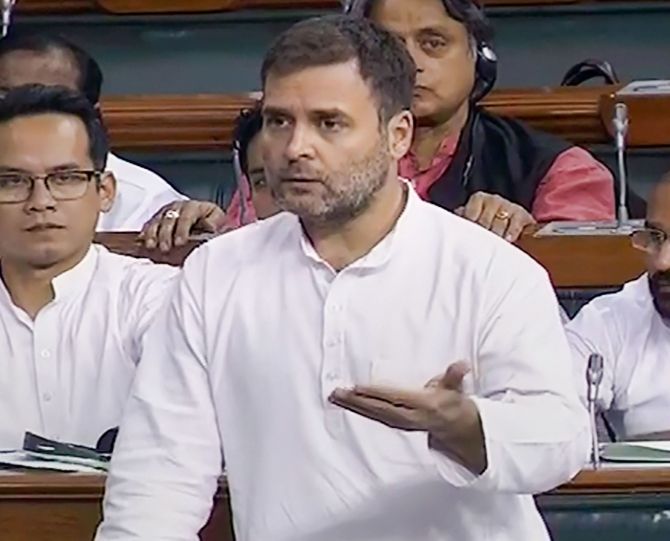 Union minister Rajnath Singh countered Gandhi's charge in Lok Sabha, as he blamed the long rule of the Congress for the plight of farmers and asserted that no prime minister has done as much for peasants as has Narendra Modi.

Taking up the issue in the Zero Hour, Gandhi in his brief maiden speech in the 17th Lok Sabha mostly focused on Kerala and made specific mention of problems facing farmers in Wayanad, from where he has been elected to Lok Sabha.

No relief has been given to farmers by the government, he said, claiming that businessmen have been granted tax concessions of Rs 4.3 lakh crore and waivers of Rs 5.5 lakh crore.

He asked why the government thinks farmers are "inferior" to rich businessmen.

In his reply, Singh said the government's move to give Rs 6,000 to farmers annually will lead to a rise in their income by 20-25 per cent and claimed that more farmers committed suicide before the BJP-led dispensation came to power.

"It is not that the condition of farmers deteriorated in the last one, two or four years. Those who ruled the country for a long time are responsible for their state. The amount of increase in minimum support price that our prime minister has effected has not been done by anybody in independent India's history," he claimed.

Gandhi said farmers are suffering throughout the country and are in terrible condition in Kerala. One farmer ended his life in Wayanad on Wednesday due to crushing debt, he added.

Farmers have been facing threats of immediate eviction from their properties, he said, as banks from which they had taken loans have pressing them hard for recovering their due. 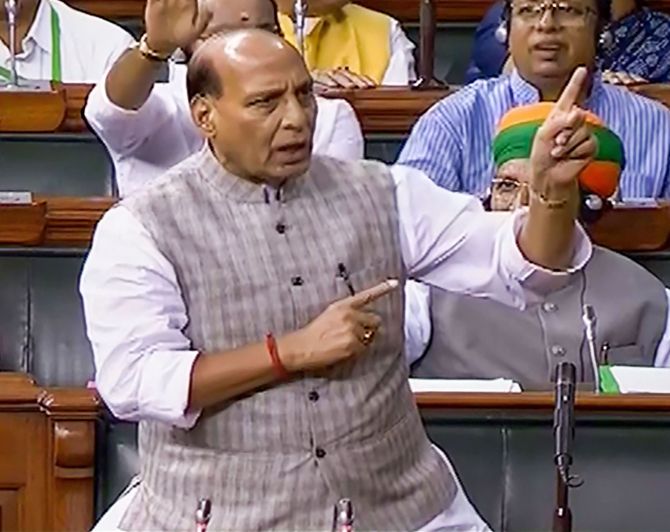 In Wayanad alone, bank notices for non-payment have been given to almost 8,000 farmers and they are facing the threat of immediate eviction under certain Acts, the Congress MP said.

Their properties are attached against their bank loans. This is resulting in a spate of farmer suicides, he said, adding that 18 farmers in Kerala have committed suicide due to this.

"The Kerala government has announced moratorium on repayment of farm loans for all Kerala farmers till December 31. The government of India is refusing to direct the RBI to consider this moratorium and get it implemented. In the last five years, the BJP government gave Rs 4.3 lakh crore in tax concession and waived Rs 5.5 lakh crore for rich businessmen. Why is this shameful double standard," he asked.

"Why does the government act as if our farmers are inferior to the rich? I was sad to see that no concrete step was taken in this budget to provide relief to the farmers," he added.

Gandhi said Modi made certain commitments five years ago to the farmers on prices and on farm loans among other issues and added that a terrible situation for the farmers exist in this country.

He requested the Union government to fulfil these promises.

As soon as Gandhi finished his speech, other Congress leaders wanted to raise the issue of desertions of MLAs from their party's ranks in Karnataka and Goa, for which they have blamed the Bharatiya Janata Party.

With the Speaker not permitting them to speak on the matter, they staged a walkout and were joined by other opposition parties such as the Trinamool Congress and the Bahujan Samaj Party.