A group of protesters on Saturday blocked the railway tracks at Nalasopara station in Palghar district of Maharashtra to protest against the terror attack in Pulwama that killed 40 CRPF personnel, officials said. In several parts of the metropolis, shops were shut in protest and schools held prayer meets as a mark of respect to the CRPF personnel who were killed on Thursday.

At Nalasopara, protesters got onto the tracks around 8.20 am and started raising slogans against Pakistan, the officials said, adding that train services on the route were affected due to the protest.

Chief spokesperson of the WR, Ravinder Bhakar, said the protest started at 8.20 am when people came on the railway tracks and stopped the movement of trains.

"Trains are not operating between Nalasopara and Virar stations, while services between Vasai to Churchgate are normal. Forces have been called in to disperse the agitating crowd," he said.

The protesters shouted slogans of 'Bharat mata ki jai'. They also raised slogans against Pakistan for the Pulwama terror attack and demanded action against the neighbouring country for sponsoring and sheltering terrorists and terror groups, another official said.

"The agitation is likely to affect the schedule of long-distance trains as well," he added.

According to railway officials, train operations on the section were suspended for almost three hours. 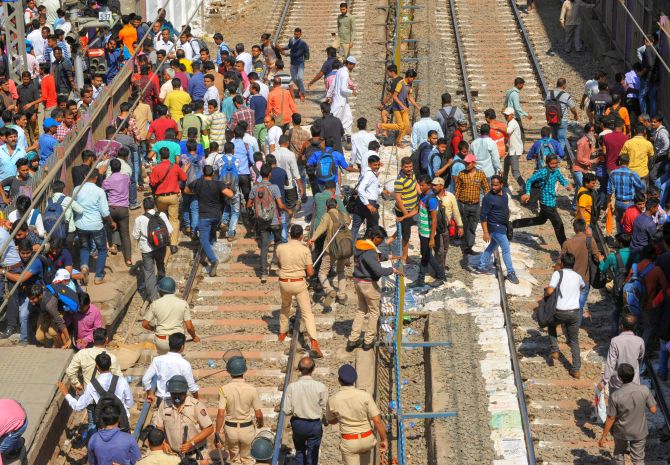 The textile hub in the Kalbadevi area of south Mumbai was the venue of a protest by cloth traders who kept their establishments closed for the day.

"We strongly condemn the horrendous terrorist attack in Pulwama. It is an act of cowardice. We have decided to keep our business shut for the day as a mark of respect for the 40 brave martyrs," said Rajiv Singal, trustee of the Bharat Merchant Chambers.

Shops in Tardeo, Grant Road, Haji Ali were also shut while prayers sessions were held in schools in the metropolis.

The Bombay Yarn Merchants' Association and Exchange Limited also issued a press statement Saturday stating that shops of their members were shut across the city.

On Friday, Maharashtra Association of Resident Doctors had organised a candlelight protest march at the civic-run Sion Hospital.

Forty CRPF personnel were killed and five injured in one of the deadliest terror attacks in Jammu and Kashmir on Thursday, when a Jaish-e-Mohammed suicide bomber rammed a vehicle carrying over 100 kg of explosives into their bus in Pulwama district.

IMAGES: Protesters clash with police after they blocked rail tracks at Nalasopara station during a protest over Pulwama terror attack. Photographs: PTI Photo
Source: PTI© Copyright 2020 PTI. All rights reserved. Republication or redistribution of PTI content, including by framing or similar means, is expressly prohibited without the prior written consent.
SHARE THIS STORY
Print this article