Mumbai on Friday saw rallies for and against the Citizenship Amendment Act and the National Register of Citizens. 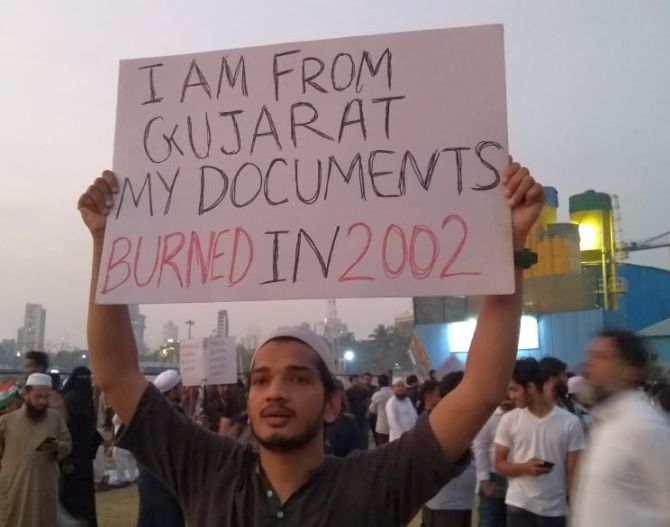 Students and social activists held a protest against the act and the NRC at the Azad Maidan in south Mumbai, while a large number of people gathered for a pro-CAA rally at the historic August Kranti Maidan, where a massive protest against the Citizenship Act was held last week.

At Azad Maidan, protesters gave slogans against the government. They carried banners decrying the Modi government over the move.

"This is a authoritarian regime. It thinks they can do anything. It is this government's responsibility to protect and not oppose the Constitution," Nikita Pathak, a student, said.

Another protester said this was a "faceless government", adding the Act is aimed "not against just one community but against the whole country." 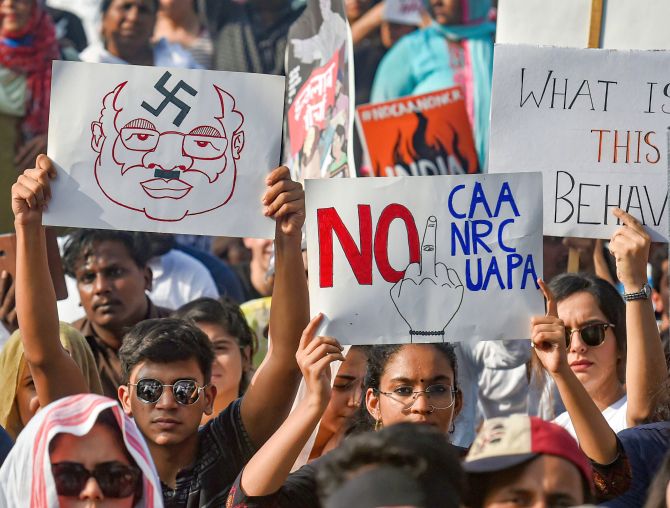 They were also carrying photographs of Dr Babasaheb Ambedkar. 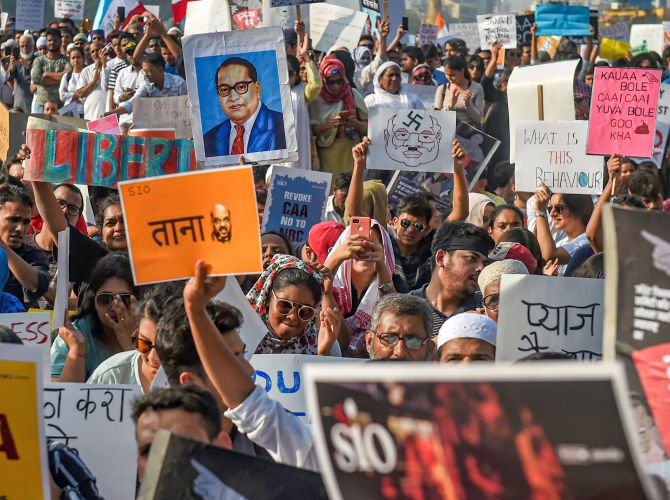 The Sanvidan Sanman Manch' is organising such rallies in various parts of the city.

One such rally in support of CAA and NRC was organised at Dadar last week.

The organisers had planned a support march between the August Kranti Maidan to Lokmanya Tilak statue at Girgaum Chowpatty but Mumbai police denied them permission for the march citing law and order issues. 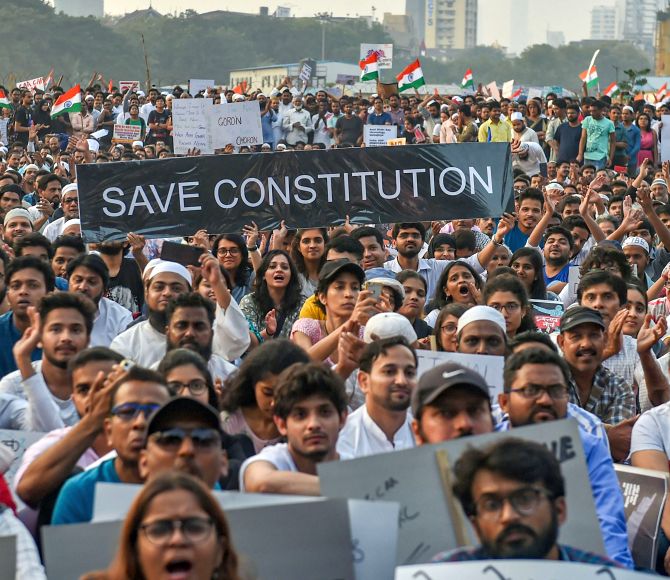 On December 19, August Kranti Maidan, where Mahatma Gandhi in 1942 told the British to quit India, witnessed a huge gathering of citizens against the CAA.

Those present then included workers of non-BJP parties, students and many Bollywood personalities.

Addressing the rally, Leader of Opposition in the Maharashtra Legislative Assembly Devendra Fadnavis said the large presence at the rally indicates "massive support" to the act. 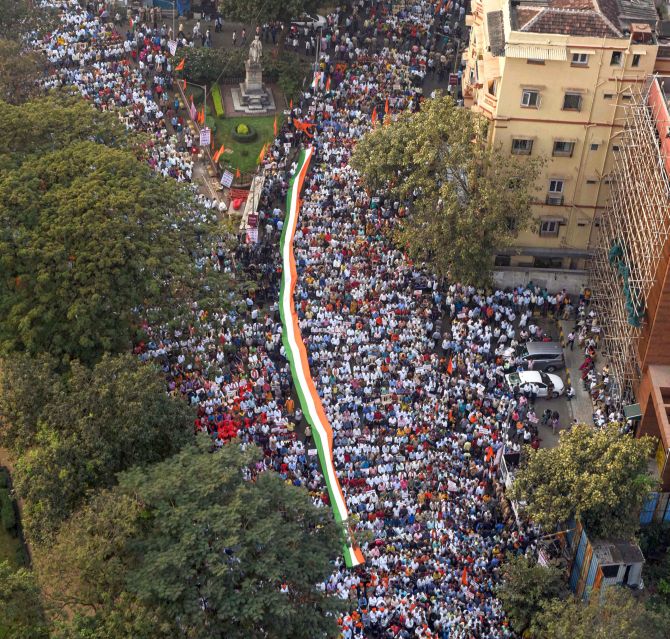 "The opposition parties are spreading rumours and misinformation (about CAA, NRC)," Fadnavis said.

The BJP is creating awareness among people that the the act intends to help the minorities from neighbouring countries who have faced religious persecution, he said. 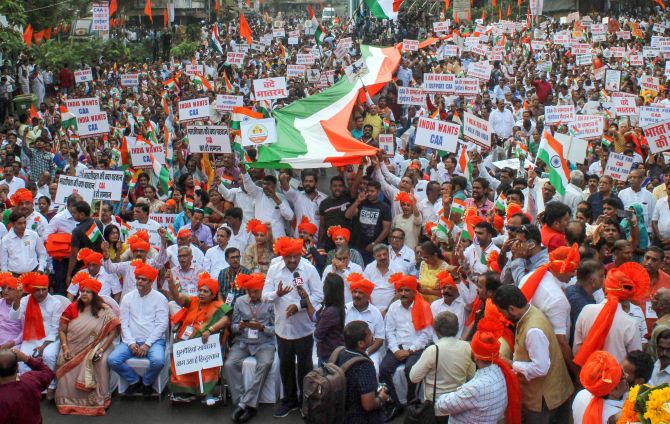 Talking to reporters before participating in a rally organised by his party in support of the act, Fadnavis accused the opposition of misleading Indian Muslims.

"Pakistan did not fulfill the (implicit) assurance during Partition that minorities will be protected (in both the countries). Hence India has to look after them because they are our people," said the former chief minister. 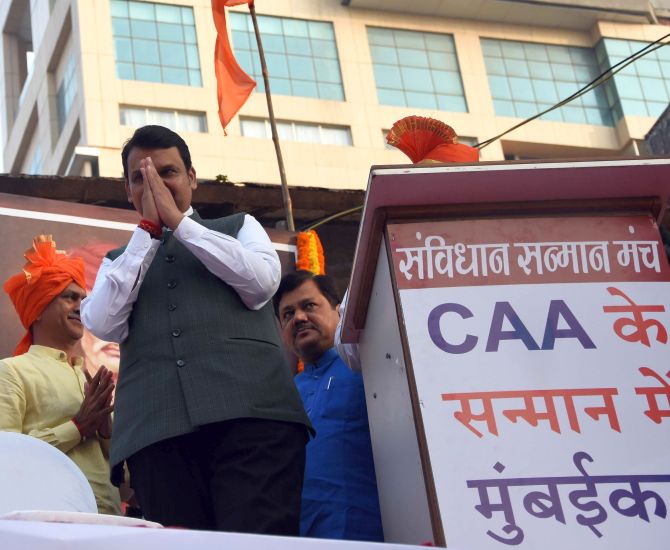 The leaders who are saying that the act will not be implemented in their states do not respect the Constitution, the BJP leader further said.

Photographs: Uttam Ghosh/Rediff.com; Mitesh Bhuvad/PTI Photo; ANI Photo
© Copyright 2020 PTI. All rights reserved. Republication or redistribution of PTI content, including by framing or similar means, is expressly prohibited without the prior written consent.