President Ram Nath Kovind on Friday embarked on a train journey to visit his birthplace in Uttar Pradesh, where he will interact with his old acquaintances from school days and the early days of his social service.

It would be after a gap of 15 years that an incumbent President is travelling by train. ”President Kovind boards a special presidential train from Safdarjung railway station to Kanpur. The train will make two stop-overs, at Jhinjhak and Rura of Kanpur Dehat, and will reach Kanpur Central in the evening,” Rashtrapati Bhavan tweeted.

Railway Minister Piyush Goyal can also be seen in pictures tweeted by Rashtrapati Bhavan of the President boarding the train. This is the first time that Kovind will visit his birthplace after becoming the President.

Though he had desired to visit the place earlier, it could not materialise because of the coronavirus pandemic.

”As he boards the train, the President will be travelling down memory lane that will cover a span of seven decades of his life, right from his childhood to holding the top constitutional position in the country,” a statement issued on Wednesday by Rashtrapati Bhavan had said.

The two stop-overs at Jhinjhak and Rura are close to the President's birthplace, Paraunkh village in Kanpur Dehat. 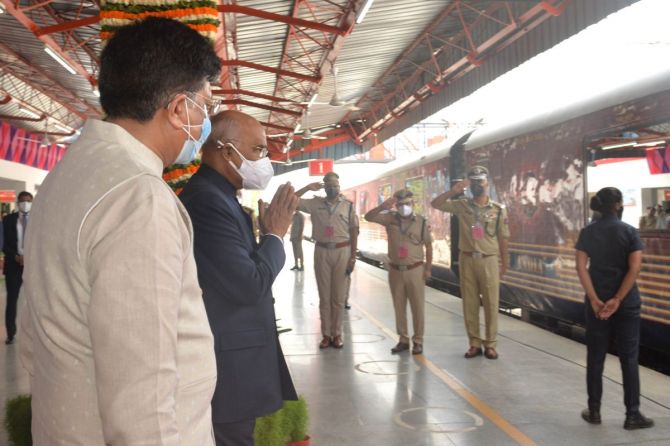 He also travelled across the country by train. On June 28, Kovind will board the train at the Kanpur Central Railway Station to reach Lucknow for his visit to the capital city of Uttar Pradesh.

On June 29, he will return to New Delhi by a special flight.