Pranab cremated with full state honours in shadow of pandemic

The nation bid farewell to 'Citizen Mukherjee', who was given a ceremonial send-off in accordance with COVID-19 protocol. IMAGE: Abhijit Mukherjee and Sharmistha Mukherjee, son and daughter respectively of late Pranab Mukherjee, hold the tricolour presented to them during the funeral of the former president, at Lodhi Road cremation ground in New Delhi. Photograph: Vijay Verma/PTI Photo

Bugles sounded the last post, soldiers clicked their heels and fired in the air and the small gathering, many in PPE suits, raised their hands in salute as India's 13th president Pranab Mukherjee was cremated on Tuesday in the shadow of the coronavirus pandemic.

The nation bid farewell to 'Citizen Mukherjee', who was given a ceremonial send-off in accordance with COVID-19 protocol, with visors, face shields, masks and the number of people at the Lodhi Road crematorium strictly restricted.

The tributes continued to pour in for the statesman, scholar and master political strategist, who stayed in public life for more than five decades as a long-time Congress leader and then as president, but only close family and friends were present at the funeral conducted with full state honours. 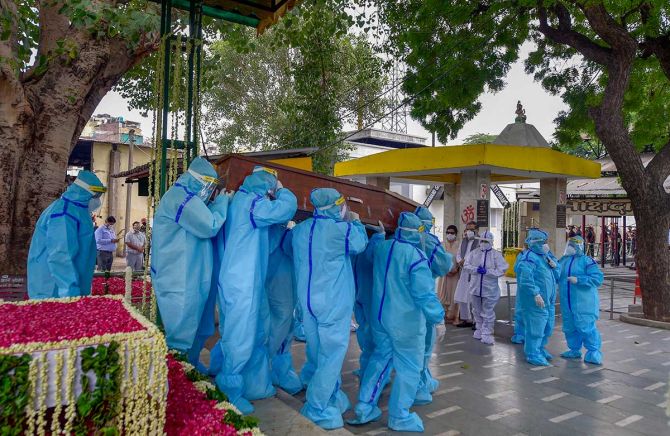 Mukherjee, 84, died on Monday at the Army's Research and Referral Hospital following a 21-day battle with multiple ailments. He tested positive for COVID-19 when he was admitted to the hospital on August 10 and was operated the same day for removal of a brain clot.

A hush fell over the crematorium as the coffin wrapped in tricolour made its way inside the complex. The air was solemn and fragrant with flowers. 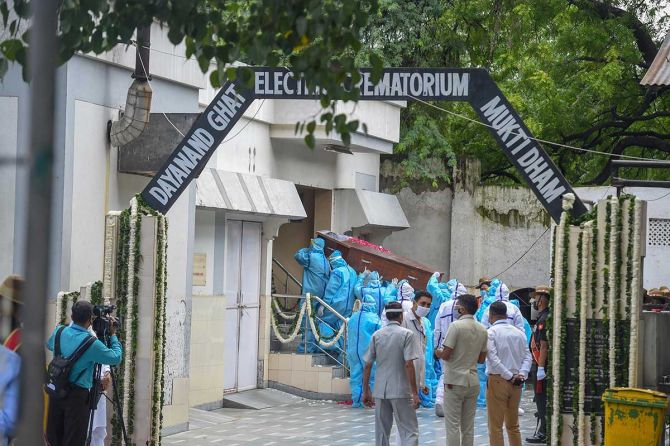 Earlier in the morning, Mukherjee's mortal remains were taken in a flower bedecked white hearse van from the hospital to his home in 10 Rajaji Marg. 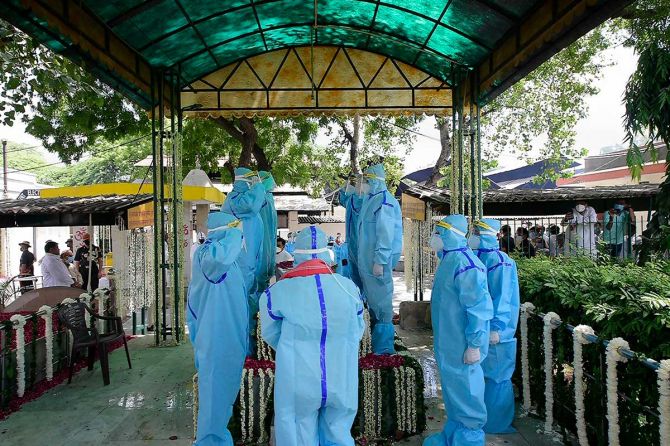 Maintaining social distancing and wearing masks, they paid floral tributes to a photo of Mukherjee while his remains were kept in another room.

Besides the 'VIPs', workers of various parties and the general public stood in long queues maintaining social distancing, wearing masks and carrying bouquets as they waited patiently to catch a glimpse of Mukherjee for one last time.

In the afternoon, the cortege wound its way from his home in Lutyens Delhi to Lodhi Road a few kilometres away. In another time, the funeral procession would have been a public event with crowds lining the roads. Today, a closed van, decorated with marigold flowers and his photograph on it, replaced a gun carriage, as It normally is for dignitaries.

The prime minister said the former president would be remembered by generations for his efforts towards India's progress.

The Union Cabinet in a meeting also passed a resolution to condole the demise of Mukherjee. Headed by Modi, the Cabinet observed a two-minute silence in the memory of the departed leader.

"The Cabinet expresses profound sorrow at the sad demise of Shri Pranab Mukherjee, former president of India. In his passing away, the country has lost a distinguished leader and an outstanding parliamentarian," the Cabinet said. It said Mukherjee, a seven-time parliamentarian, was a man of unparalleled experience in governance who served as the country's foreign, defence, commerce and finance minister.

"Whether people agreed with him or not, he was very forthright in articulating his views keeping in view the interests of the country," CPI leader D Raja, who visited Mukherjee's residence to pay his condolences, told reporters.

Mukherjee leaves behind his two sons and daughter. And a legion of admirers and in his home state West Bengal.

Abhijit Mukherjee said he is planning to build a museum-cum-library in his father's memory at their home in Jangipur in West Bengal, an acknowledgment of the former president's enduring connect with his home state. 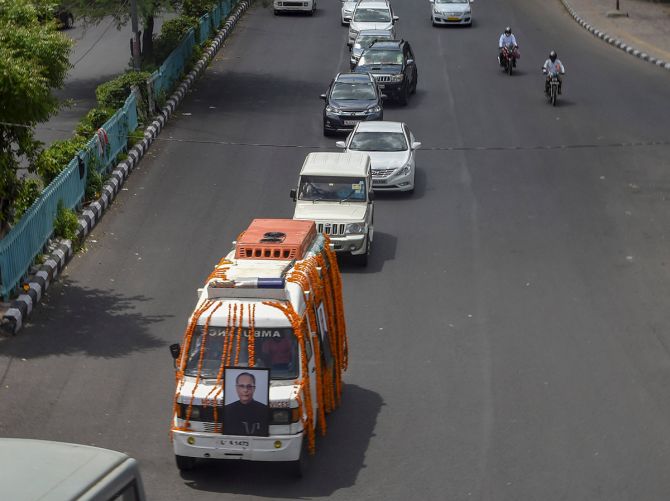 Jangipur, the constituency that twice elected Mukherjee to the Lok Sabha after two failed attempts to enter the lower house, is where the scholar-statesman shed the tag of a "rootless wanderer".

In his village Mirati, scores of people lined up to offer floral tributes and light candles in memory of their beloved 'Poltu da' at the ancestral temple.

Grief-stricken neighbours and family members, who had been holding yagnas for Mukherjee's recovery over the past three weeks, milled around his residence 'Kamada Kinkar Bhavan', most recounting how the statesman touched their lives in one way or the other.

"The village has lost its guardian," said Bipattaran Mukhopadhyay, the family priest.

Several elders in the village said Durga Puja will no longer be the same without him.

A world away from Mirati, the Chinese Foreign Office remembered Mukherjee as a 'veteran statesman of India'.

"In his 50 years in politics, he made positive contributions to China-India relations," Chinese foreign ministry spokesperson Hua Chunying told a media briefing in Beijing.

"It is a heavy loss for China-India friendship and to India. We express deep condolences over his passing and extend sincere sympathies to the Indian government and his family," Hua said. In the US, Democratic presidential candidate Joe Biden said Mukherjee believed deeply in the importance of India and the US tackling global challenges together.

Several other prominent US leaders and organisations also condoled Mukherjee's death, saying he will go down in history among India's most distinguished statesmen and scholars.

Mukherjee, known for his encyclopedic memory and sharp intellect, was president from 2012 to 2017.

The college teacher went on to become became India's youngest finance minister at 47 in 1982. Mukherjee served as minister for external affairs, defence, finance and commerce and was the first Indian president to do so.

He had the distinction of serving in the cabinets of three prime ministers -- late Indira Gandhi, late P V Narasimha Rao and Manmohan Singh and was the party's trusted Man Friday as it evolved over the decades.

Mukherjee's tenure as president will stand out for the tough stance he took on mercy petitions.

Of the 34 mercy petitions presented to him, he rejected 30.