On the ruins of Mosul, Pope says hope more powerful than hatred The Pope wrapped up his historic whirlwind tour of Iraq on Monday with a message of coexistence, forgiveness and peace. IMAGE: A banner depicting Pope Francis hangs from a wall ahead of his visit to Mosul. Photograph: Yara Nardi/Reuters

During his four-day papal visit, the Pope covered five provinces across the war-torn nation. 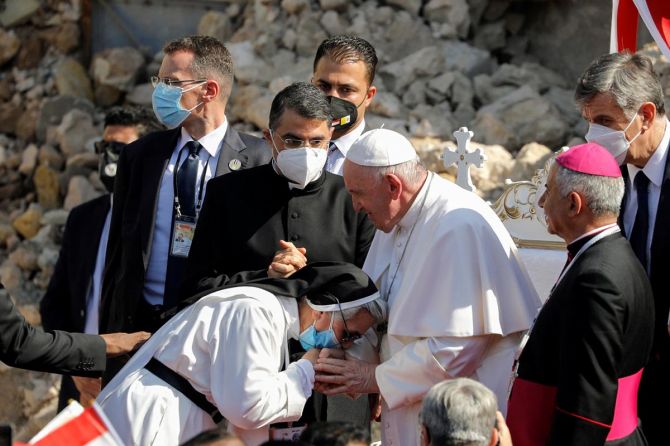 IMAGE: A nun kisses the hand of Pope Francis during a prayer at 'Hosh al-Bieaa'. Photograph: Khalid al-Mousily/Reuters 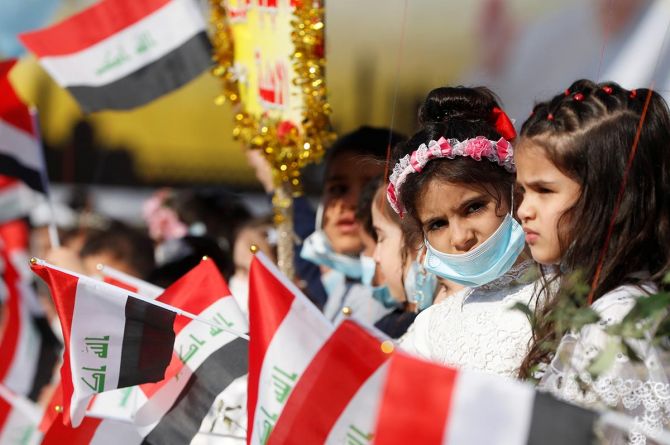 On the third day of his visit, Pope Francis had called for a 'harmonious coexistence' among people from different backgrounds and cultures. IMAGE: A woman waves a Vatican flag as she waits for Pope Francis to hold a mass at Franso Hariri Stadium in Erbil, Iraq. Photograph: Yara Nardi/Reuters

Leading a prayer at a square amid the ruins of the Syro-Catholic Church in Mosul's Old City, the Pope said, "Here in Mosul, the tragic consequences of war and hostility are all too evident." 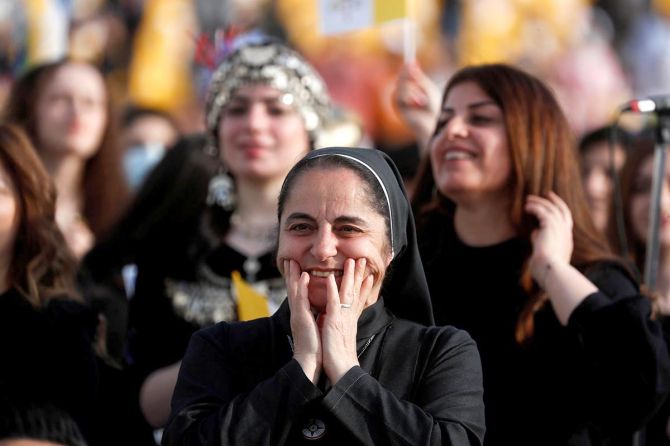 "How cruel it is that this country, the cradle of civilisation, should have been afflicted by so barbarous a blow, with ancient places of worship destroyed and many thousands of people -- Muslims, Christians, Yazidis and others -- forcibly displaced or killed!" IMAGE: A Kurdistan flag is held up as Pope Francis arrives at Franso Hariri Stadium in Erbil. Photograph: Yara Nardi/Reuters

During his trip to Iraq, the Pope denounced extremism in the name of religion as 'betrayals of religion' and called for friendship and cooperation between religions. 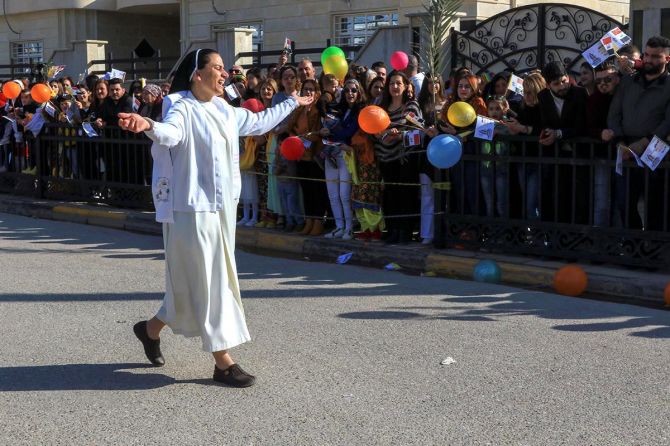 IMAGE: A nun celebrates as people wait for the arrival of Pope Francis, in the town of Qaraqosh, Iraq. Photograph: Ari Jalal/Reuters

In 2017, ISIS had threatened to 'behead' Pope Francis. The Pope visited Ur on his second day of the first-ever papal visit to Iraq condemned the violence that has plagued the country in recent years and called for friendship and cooperation between religions. IMAGE: Pope Francis meets Abdullah Kurdi, father of Alan Kurdi, the three-year-old boy whose body was found washed up on a Turkish beach in 2015, in Erbil, Iraq. Photograph: Vatican Media/Handout via Reuters

"All its ethnic and religious communities have suffered. In particular, I would like to mention the Yazidi community, which has mourned the deaths of many men and witnessed thousands of women, girls and children kidnapped, sold as slaves, subjected to physical violence and forced conversions," he said. 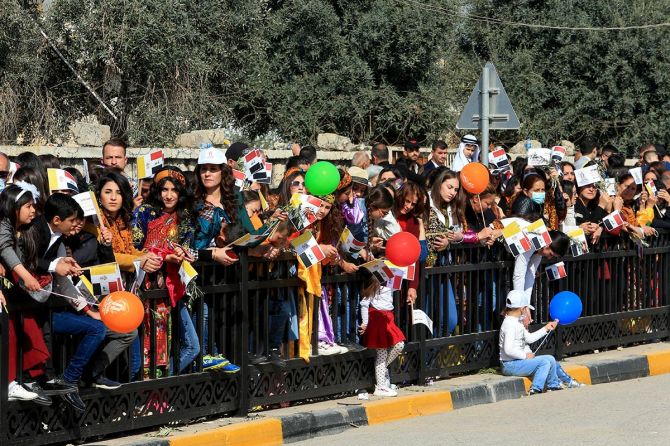 IMAGE: People wait for the arrival of Pope Francis near the Grand Immaculate Church, in the town of Qaraqosh, Iraq. Photograph: Ari Jalal/Reuters IMAGE: A man kisses the hand of Pope Francis upon his arrival at Erbil International Airport in Erbil. Photograph: Azad Lashkari/Reuters

It is a significant trip as this is the first-ever papal visit to Iraq, which is considered the homeland of Abraham. IMAGE: Pope Francis greets people as he arrives to hold a Mass at the Chaldean Cathedral of 'Saint Joseph' in Baghdad. Photograph: Vatican Media/Handout via Reuters

According to CNN, the pontiff on Friday held meetings with Prime Minister Mustafa al-Kadhimi and President Barham Salih. 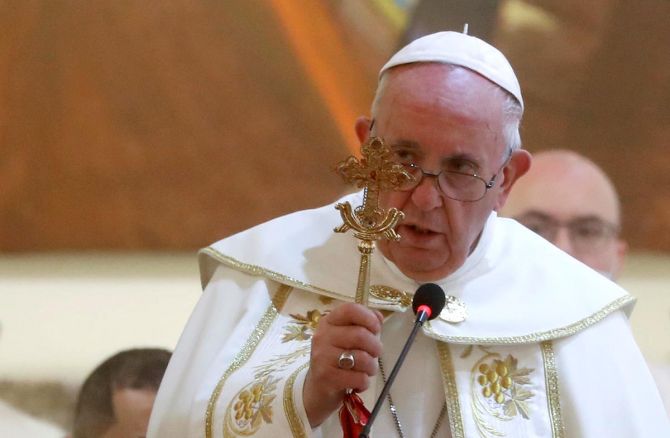 He also met with the clerics and other officials at a Baghdad church, which was the site of the bloody 2010 massacre that killed 51 congregants and two priests. 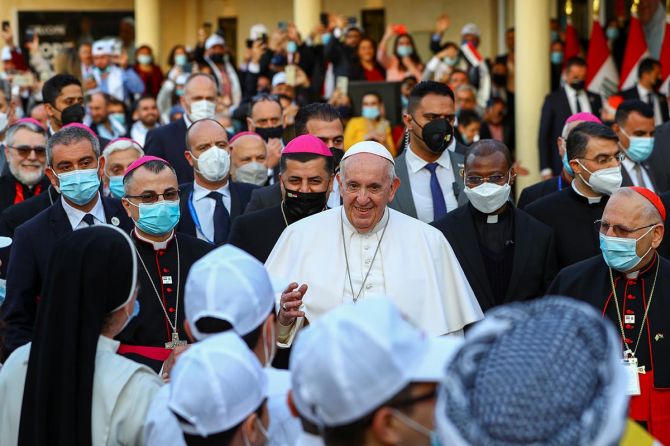 IMAGE: Pope Francis arrives to lead a mass at the Chaldean Cathedral of 'Saint Joseph' in Baghdad. Photograph: Ahmed Jadallah/Reuters 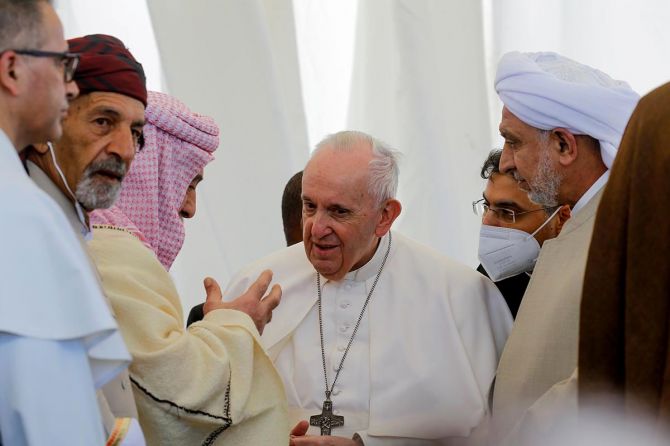 IMAGE: Pope Francis attends an inter-religious prayer at the ancient archeological site of Ur, traditionally believed to be the birthplace of Abraham, in Ur near Nassiriya, Iraq. Photograph: Thaier al-Sudani/Reuters 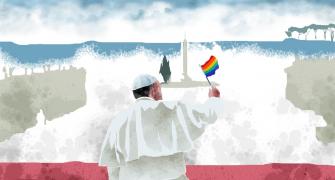 Pope has opened a window for gays 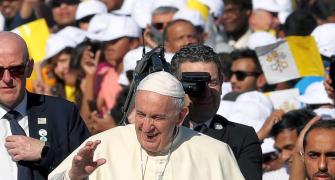 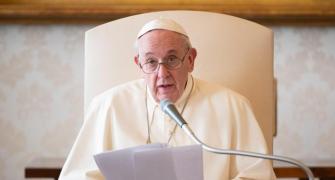 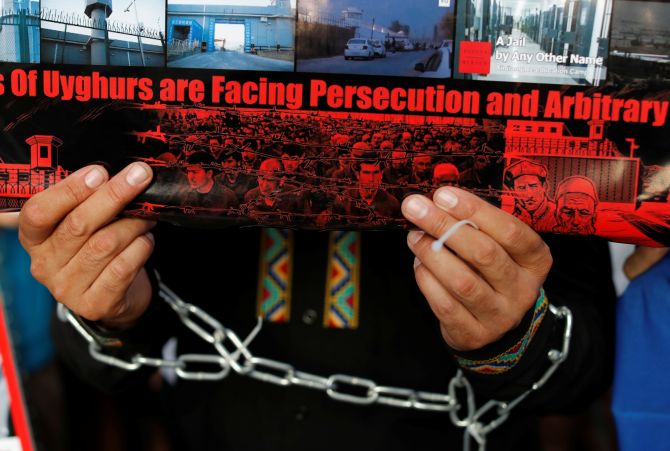 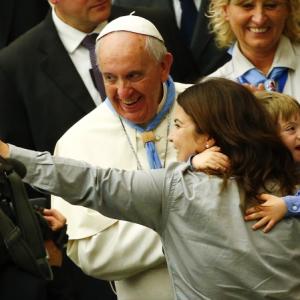