Over 62% turnout in 5th phase; violence in J&K, Bengal

With this phase, election will be over in 424 seats and polling in the remaining 118 seats will be held on May 12 and 19. 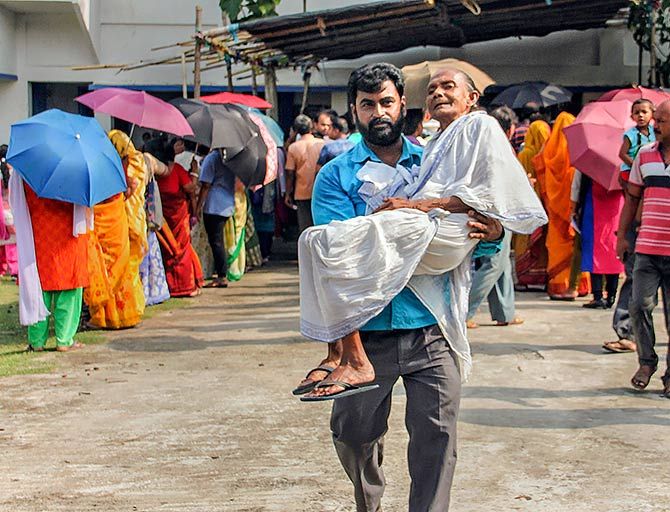 IMAGE: An elderly woman is carried by a relative near a polling station in Bangaon parliamentary constituency, during the fifth phase of Lok Sabha elections, in Nadia district of West Bengal. Photograph: PTI Photo

Two explosions at polling stations in Pulwama in Kashmir and clashes between Trinamool Congress and Bharatiya Janata Party in West Bengal were reported during the fifth phase of Lok Sabha polls on Monday across seven states in which over 62 per cent turnout was recorded.

According to the Election Commission, over 57.33 per cent of 2.47 crore eligible people cast their vote in 14 seats in Uttar Pradesh, where political heavyweights like Congress' Sonia Gandhi and Rahul Gandhi and Union ministers Rajnath Singh and Smriti Irani were in the fray. 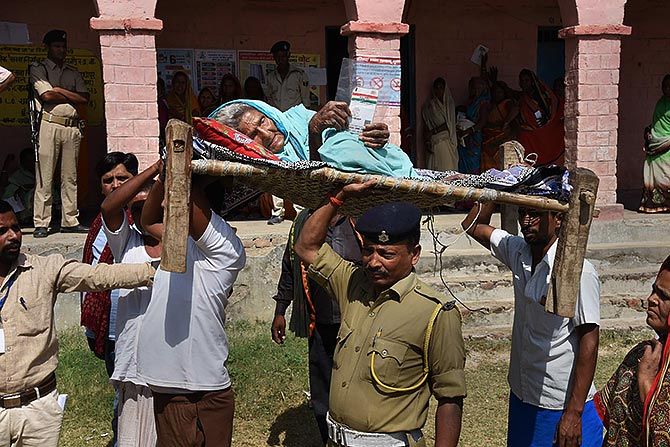 IMAGE: Security personnel carry an elderly woman to a polling station to cast vote during the fifth phase of the 2019 Lok Sabha elections, at Hajipur in Vaishali district of Bihar. Photograph: PTI Photo

In Rajasthan, 63.78 per cent polling was recorded in 12 seats, while it was 63.88 per cent in seven constituencies in Madhya Pradesh, 57.86 per cent five seats in Bihar and 63.72 in four seats in Jharkhand that went to polls on Monday.

The voter turnout was 74.42 in seven seats in West Bengal, where incidents of Trinamool Congress and BJP workers attacking each other, hurling of bombs, injury to a candidate due to lathi charge by central forces, manhandling of a contestant and beating up of a polling agent were reported in Bangaon (SC), Barrackpore, Hooghly and Howrah constituencies. 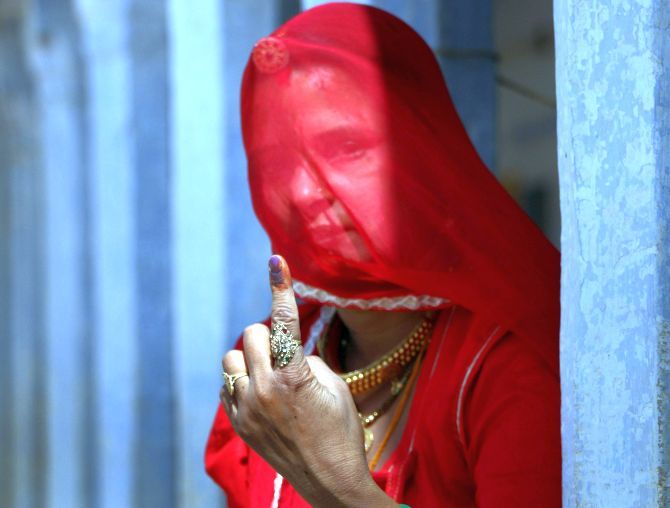 IMAGE: A voter shows her finger marked with indelible ink after casting vote at a polling station during the fifth phase of the 2019 Lok Sabha elections, in Nagaur district of Rajasthan. Photograph: PTI Photo

In Jammu and Kashmir, 64 per cent polling was recorded in Ladakh but the turnout was barely three per cent in militancy-infested Shopian and Pulwama districts in the final of the three-phase election to Anantnag constituency held amid militant threats and boycott call by separatists in Kashmir.

Terrorists lobbed a grenade towards Rohmoo polling station and set off an explosion at another polling booth in Tral in Pulwama but no one was injured in the two incidents.

The overall turnout was 8.76 per cent as against 28.54 per cent in 2014 in Anantnag where 18 candidates are in the fray including People's Democratic Party president and former chief minister of Jammu and Kashmir Mehbooba Mufti.

In the high profile Amethi seat, Union minister and BJP candidate Smriti Irani alleged that her rival and Congress president Rahul Gandhi was 'ensuring booth capturing' and also tagged a video on twitter in which an elderly women alleged that her hand was forcibly put on 'panja' (hand) election symbol of the Congress.

But the Chief Electoral Officer said the matter was 'examined thoroughly and found baseless'.

The BJP had bagged 12 of the 14 seats in 2014 with the Congress winning Rae Bareli and Amethi. 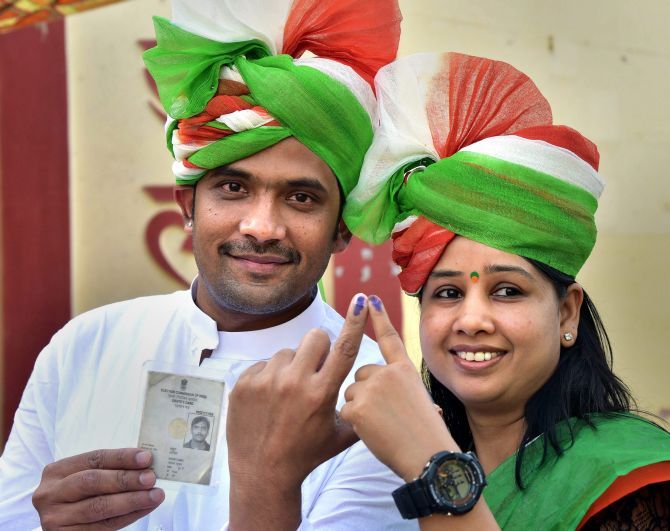 IMAGE: A couple flash their inked fingers in Bikaner after casting their vote. Photograph: PTI Photo

In West Bengal, a scuffle between Barrackpore seat's BJP candidate Arjun Singh and personnel of central security forces was reported when the former TMC MLA tried to enter a booth following allegations that voters were not being allowed to exercise their franchise there, the official said.

Alleging that the police were not doing anything to stop rigging in some booths of Barrackpore seat, Singh demanded that re-polling be ordered.

The maximum number of 'sensitive' booths in Monday's elections were in Barrackpore seat where TMC sitting MP Dinesh Trivedi has been pitted against Singh, who switched over to the BJP recently after he was denied a ticket by party supremo Mamata Banerjee. 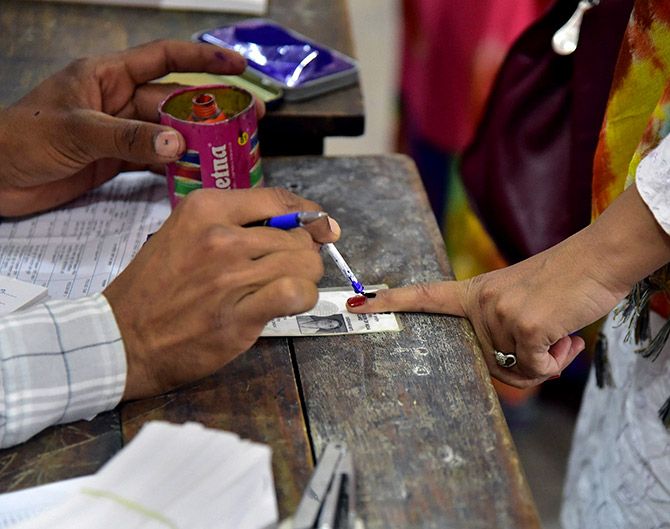 IMAGE: A voter gets her finger marked with indelible ink before casting vote at a polling station, during the fifth phase of the 2019 Lok Sabha elections, in Bikaner. Photograph: PTI Photo

In Howrah's Balitikuri, TMC candidate and former India footballer Prasun Bandyopdhayay was 'manhandled' allegedly by central forces when he tried to enter a booth there. A first information report was lodged in this connection, Bandyopadhyay said.

Bomb explosions were reported from outside a booth at Hingli in Bangaon constituency following a clash between two groups allegedly owing allegiance to the TMC and the BJP, in which two persons were injured, an official said.

There is also a report that a Communist Party of India-Marxist agent was beaten up and driven out of a booth in Arambagh constituency. 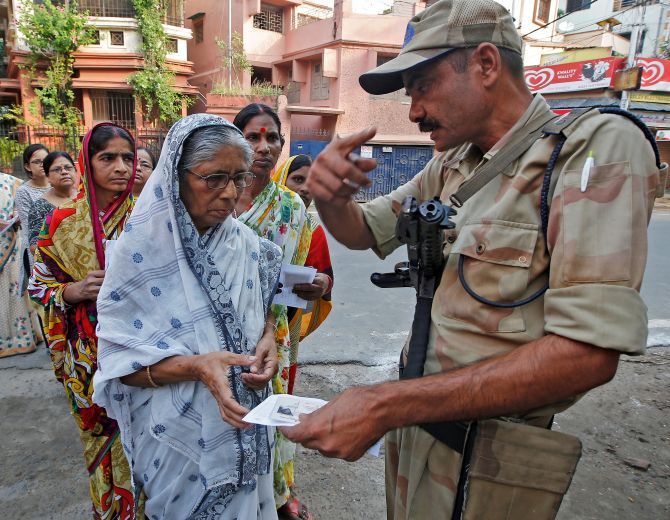 IMAGE: A security personnel checks the identity card of a woman as she stands in a queue with others to cast their vote at a polling station during the fifth phase of general election in Howrah, on the outskirts of Kolkata. Photograph: Rupak De Chowdhuri/Reuters

A presiding officer at a booth in Tarakeswar was removed after one person, allegedly belonging to TMC, was seen casting votes on behalf of others there.

The ruling Trinamool Congress, the BJP, the Congress and Left Front constituent CPI-M are the main contenders in the seven seats where 83 candidates are contesting.

In Rajasthan, where polling concluded on Monday, an overall turnout of 66.12 per cent in 25 seats was recorded in the two phases. IMAGE: Voters show their ID cards as they wait in a queue to cast vote at a polling station, during the fifth phase of Lok Sabha elections, in Ranchi. Photograph: PTI Photo

An official said 'minor issues related to EVMs were reported at some places' in Madhya Pradesh 'but they were sorted out'.

Barring a few reports of poll boycott and EVM glitches, voting was largely peaceful in Bihar. 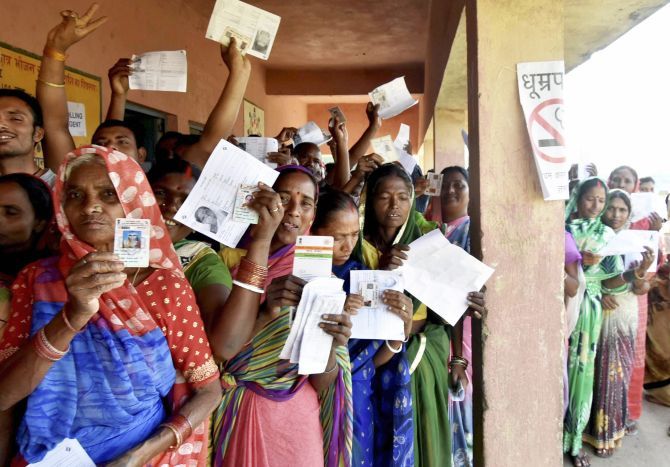 IMAGE: Jharkhand saw an estimated 12.22 per cent of the 65,87,028 electorate cast their votes till 9 am on Monday. Photograph: PTI Photo

One person has been taken into custody in Saran for damaging an EVM which was replaced.

"The voting process was delayed by around 30 minutes in six polling stations of Saran, two in Madhubani, one each in Sitamarhi and Muzaffarpur constituencies due to technical glitches in the EVMs, but the officials have attended to the issues," according to an official. 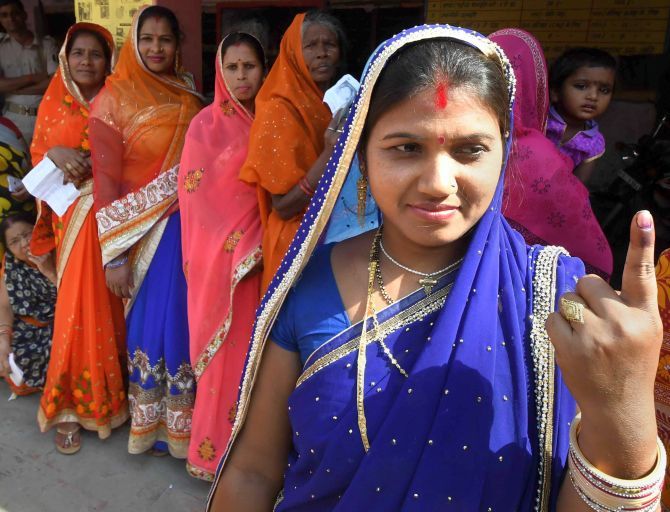 IMAGE: A voter shows her finger marked with indelible ink after casting vote at a polling station during the fifth phase of the 2019 Lok Sabha elections, at Hajipur in Vaishali district in Bihar. Photograph: PTI Photo

Over 8.75 crore electors were to decide the fate of 674 candidates in the fifth phase Monday.

The Election Commission had set up 96,000 polling booths which included the maximum of 28,072 in Uttar Pradesh. 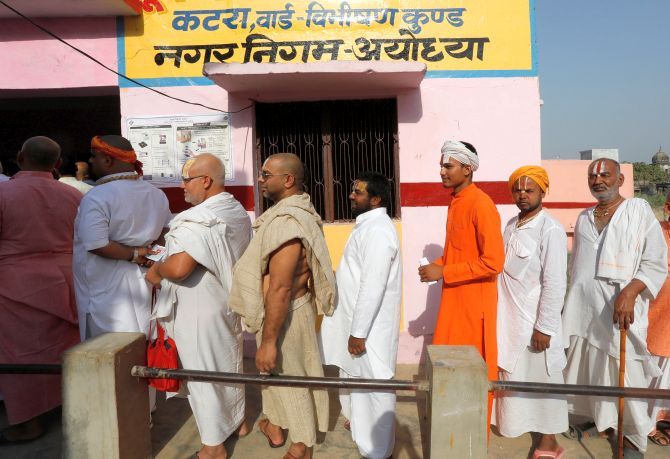 IMAGE: Sadhus stand in a queue outside a polling station to caste their vote in Ayodhya. Photograph: Pawan Kumar/Reuters

Election to 542 Lok Sabha seats is being conducted in seven phases between April 11 and May 19. IMAGE: A voter shows his finger marked with indelible ink after casting vote at a polling station in Nagaur. Photograph: PTI Photo

Election to Vellore constituency in Tamil Nadu had been cancelled by the EC following excess use of money power. 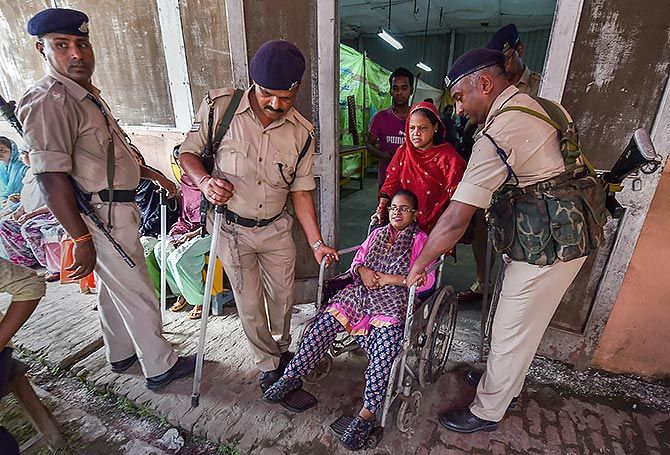 Results will be declared on May 23. 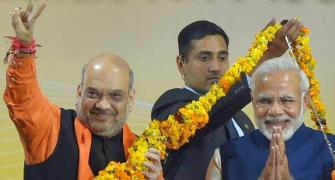 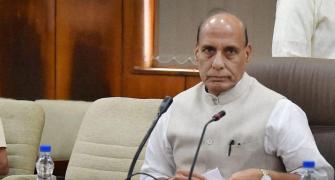 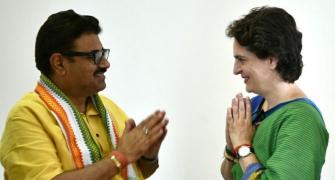 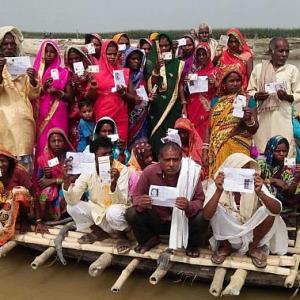 The 51 seats going to polls in Phase 5 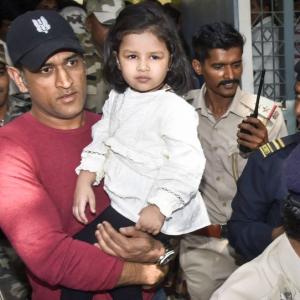 Jayant Sinha, Rajnath queue up to cast their vote