76.07% recorded in 8th and final phase of Bengal polls

The eighth phase of assembly poll in West Bengal on Thursday brought to an end the protracted voting schedule in the state, which saw sporadic violence, assault of candidates and death of a person during the day when nearly 80 per cent votes were cast. 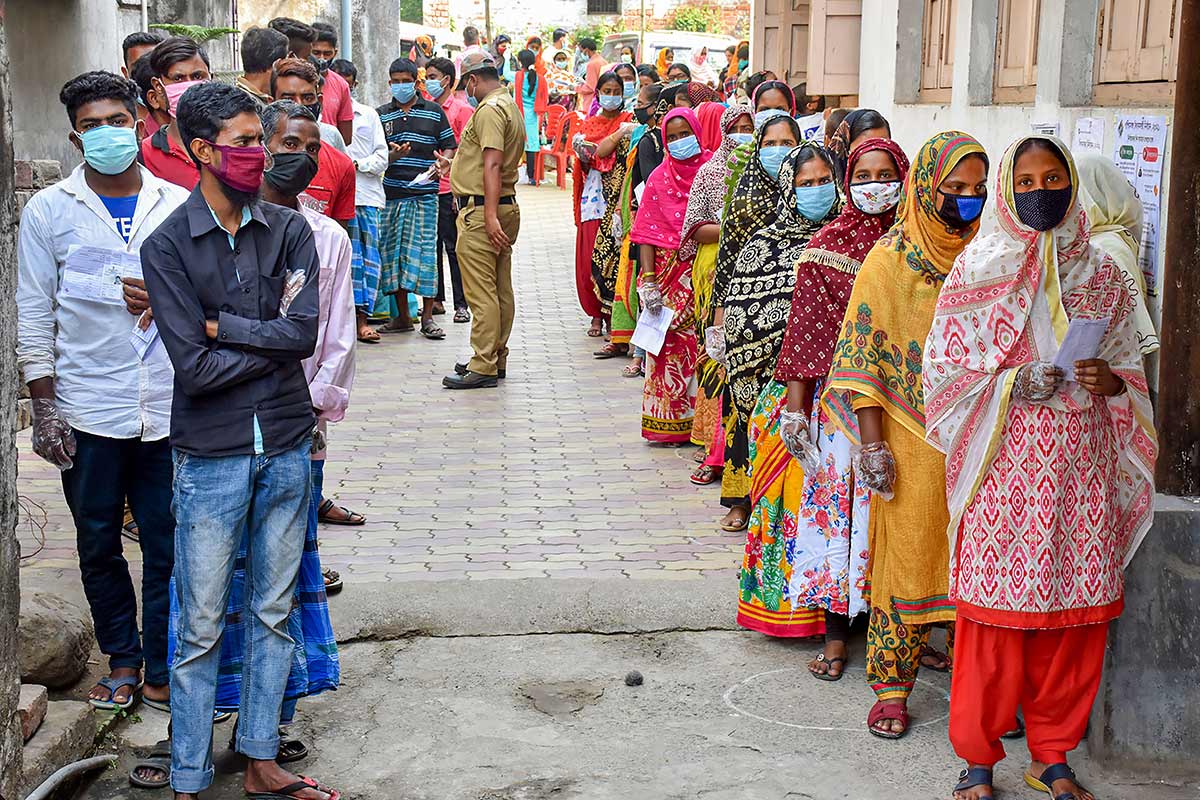 IMAGE: People stand in a queue to cast their votes in Murshidabad district during the 8th and last phase of West Bengal assembly polls,. Photograph: PTI Photo

According to Election Commission sources, 76.07 per cent voter turnout was recorded till 5 p m in 35 constituencies where polling was conducted on Thursday and is expected to go up further after the polling ends at 6.30 PM.

Voting was held in 11,860 polling stations of the 35 constituencies -- 11 each in Murshidabad and Birbhum, six in Malda and seven in north Kolkata, the sources said.

One person was killed and two others were injured when a car hit them in Murshidabad district hours before the polling exercise began, a police officer said.

The Communist Party of India-Marxist claimed that its member Kader Mondal (42) was killed, and two others -- Asim Al Mamoon (43) and Lal Chand Mondal (42) were injured when TMC candidate Jafikul Islam ran his car over them.

Islam, TMC's Domkal candidate, rubbished the allegation claiming that he was nowhere near the site of the incident. 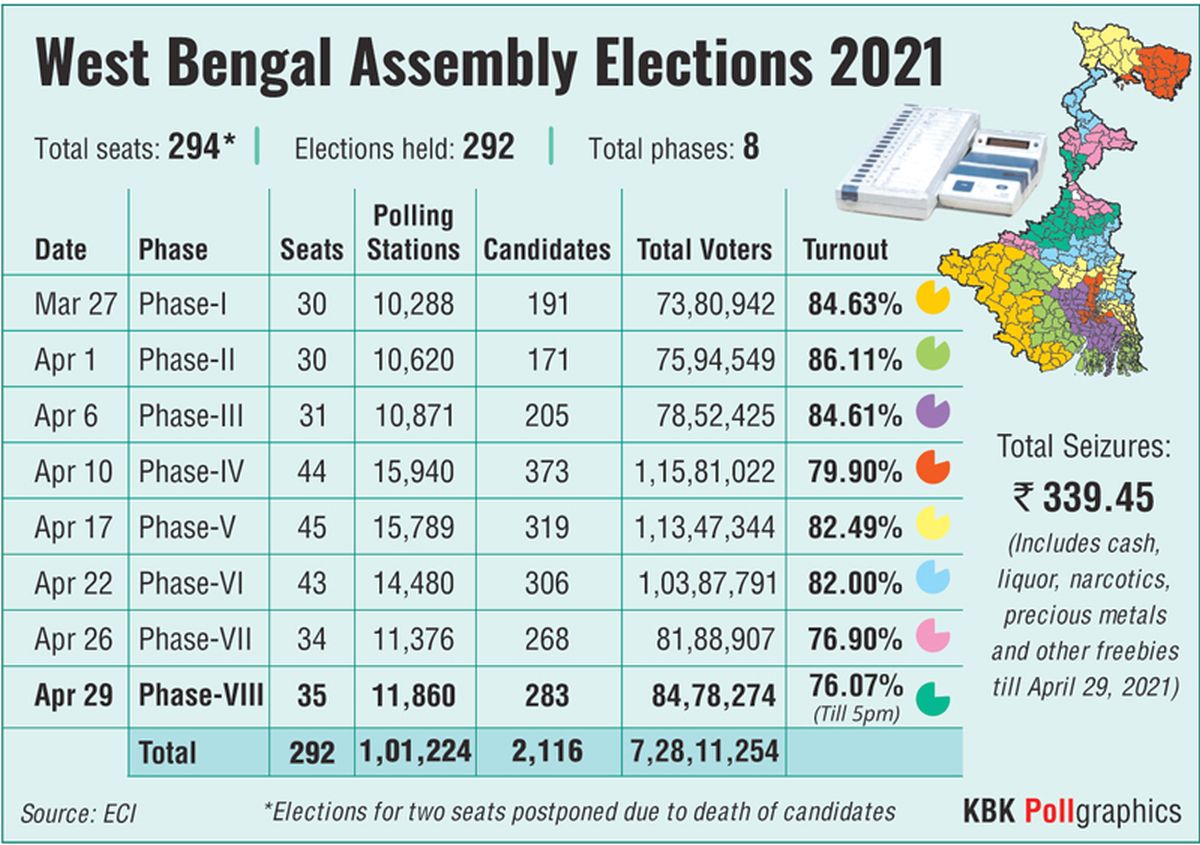 Chief Election Officer Aariz Aftab has sought a report from district authorities in the matter.

In Beliaghata area of the city clashes broke out between two groups which was followed by lathicharge by the police to disperse the people.

Two persons who identified themselves as Bharatiya Janata Party activists alleged that Trinamool Congress workers roughed them up during the melee.

There were clashes between TMC and BJP activists in Ilambazar area of Bolpur constituency. BJP candidate Anirban Ganguly's car was damaged when he reached there.

Ganguly, who was touring the constituency to check the polling process at different booths, alleged that the attack on his vehicle was by TMC-backed goons.

"The TMC goons attacked and damaged my vehicle to drive me away. They are doing this only because the TMC is scared of losing the elections," Ganguly alleged.

TMC candidate for the constituency and state minister Chandranath Sinha rubbished Ganguly's allegations and said that villagers drove him away as the BJP candidate was trying to influence voters. 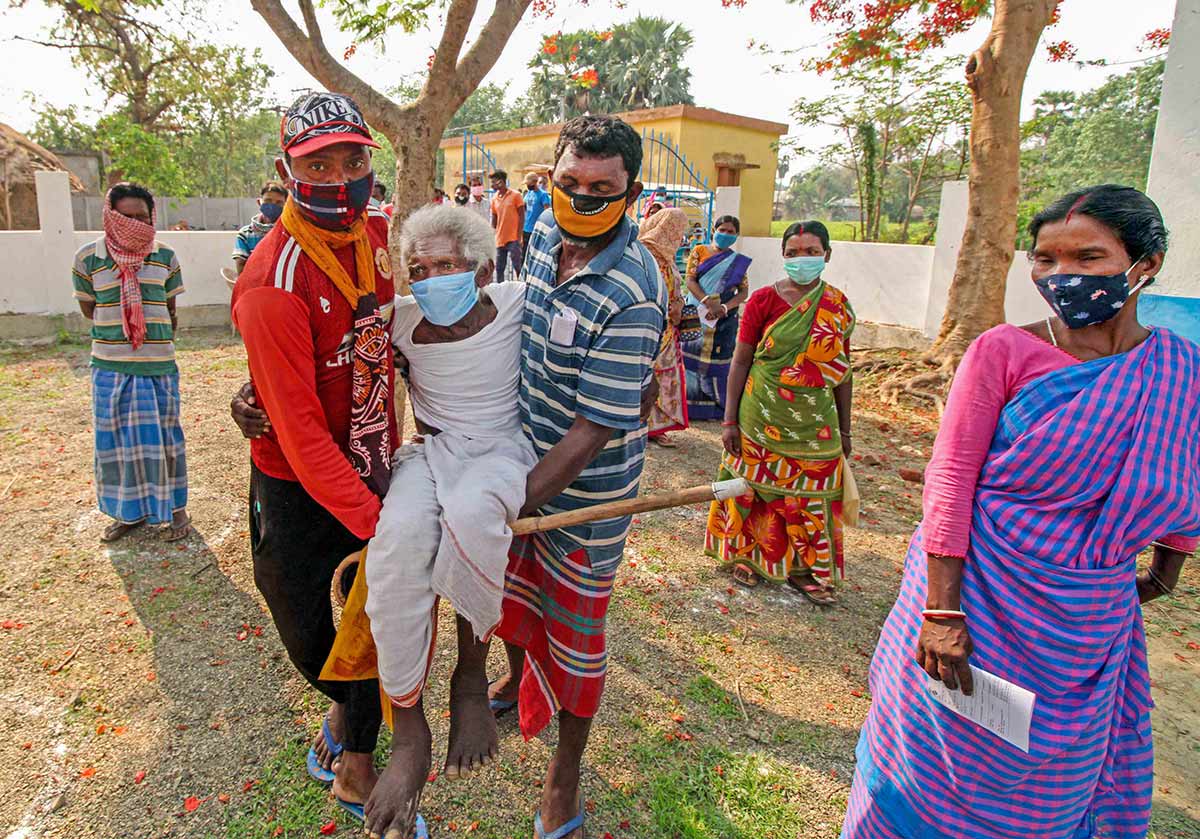 IMAGE: An elderly voter is carried to the polling booth for casting vote at a polling station in Bandhlodanga in Birbhum district of West Bengal. Photograph: PTI Photo

He accused TMC cadres of attacking him and the allegation was dubbed as "baseless" by local leaders of the state's ruling party.

In Domkol area in Murshidabad district clashes broke out between the TMC and the BJP activists. The police later recovered a huge quantity of crude bombs from a field. Bomb disposal squads rushed to diffuse the bombs.

In Maniktala constituency of Kolkata, BJP candidate Kalyan Choubey was gheraoed by a group of people during his visit to the polling booths.

Choubey alleged that TMC-backed anti-socials tried to create disturbances so that they could rig the polls. 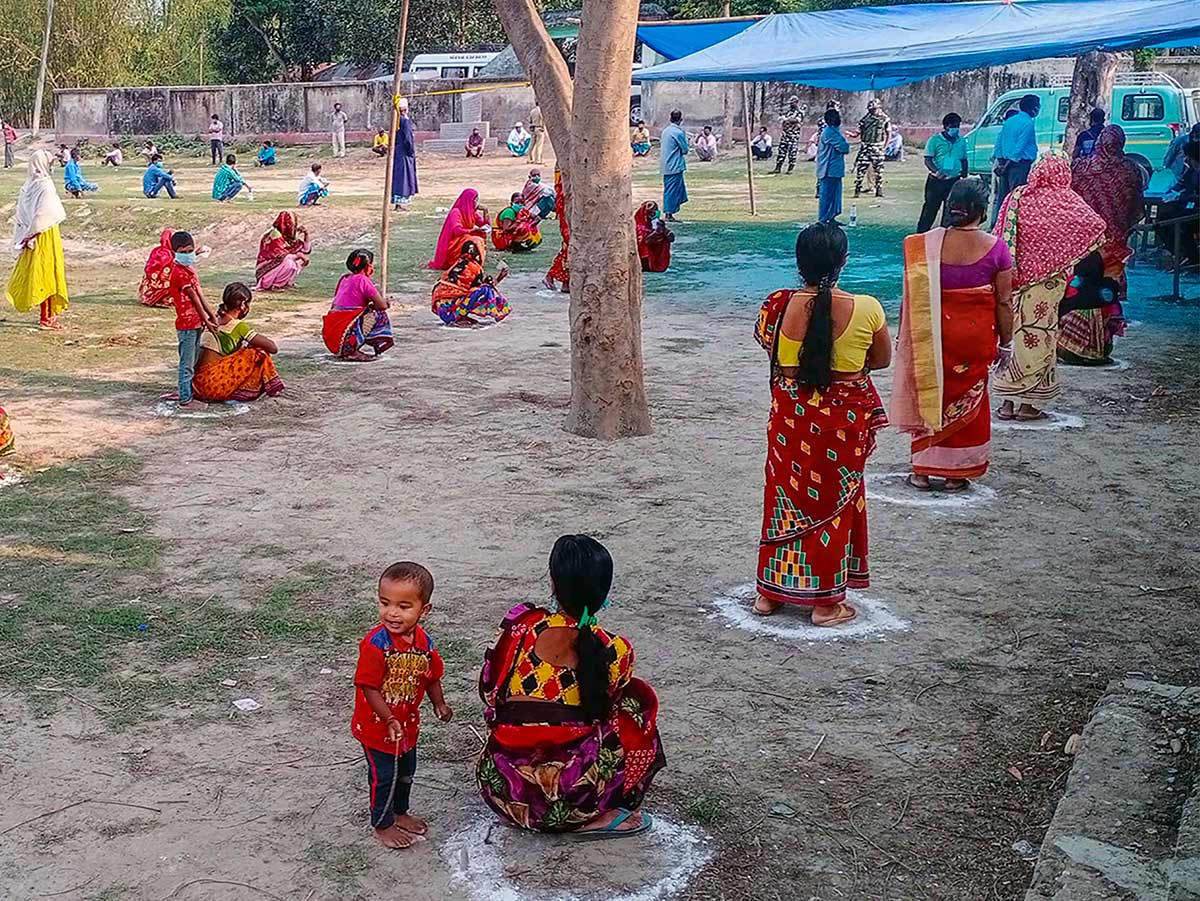 IMAGE: A queue of voters outside a polling station at the Sitalkuchi assembly constituency in Cooch Behar district of West Bengal. Photograph: PTI Photo

Maniktala TMC candidate Sadhan Pande alleged that agents of his party were assaulted by BJP cadres in several booths.

"A lady agent was beaten up by BJP goons. The EC should take note of it," Pande said.

An official of the CEO's office said that banned crackers were burst at the spot.

BJP's Jorasanko candidate Meena Devi Purohit alleged that the bombs were thrown at her vehicle when she was touring different polling booths.

A huge police contingent was rushed to the spot to control the situation. IMAGE: A Central Force jawan helps a Nun of Missionaries of Charity to cast her vote at a polling centre in Kolkata. Photograph: Swapan Mahapatra/PTI Photo

Senior TMC leader Sougata Roy alleged that BJP goons along with a section of the central forces had terrorised voters.

The BJP and officials of the central forces have dubbed the allegations as baseless.

Long queues were seen outside most polling booths since early morning raising concerns over the spread of COVID-19, even as the Election Commission assured that all precautionary measures are in place.

Bengal registered its highest single day spike of 17,207 COVID-19 cases on Wednesday, while 77 more people succumbed to the disease.

The poll panel deployed 641 companies of central forces in the final phase to ensure fair voting.

The eight-phase election to the 294 member West Bengal assembly began on March 27. Votes will be counted on Sunday. 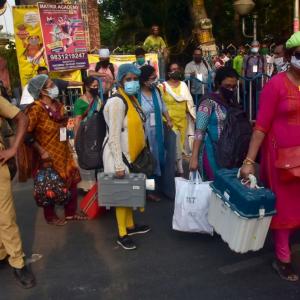 Game on! The 2021 West Bengal Poll Sentimeter is here