Lawyers and police clashed at Tis Hazari Court complex in New Delhi on Saturday afternoon during which at least 10 police personnel and several lawyers were injured while 17 vehicles vandalised, according to officials and eyewitnesses. 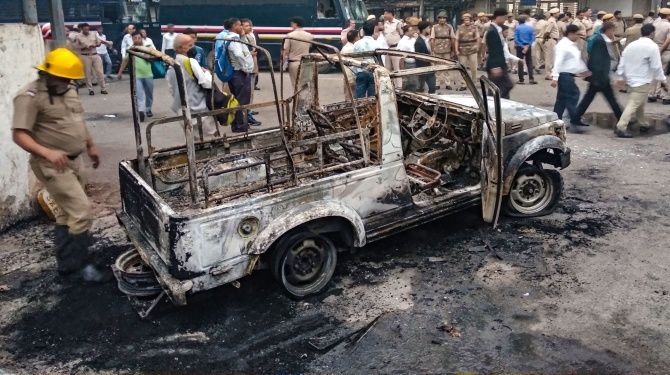 IMAGE: A view of a police vehicle after it was burnt down during clashes between lawyers and police personnel at Tis Hazari Court complex. Photograph: Arun Sharma/PTI Photo

Lawyers alleged that four of their colleagues were injured, including one in police firing, but the police denied that it had opened fire.

Bar associations condemned the incident and called a one-day strike across all district courts in the national capital on November 4. 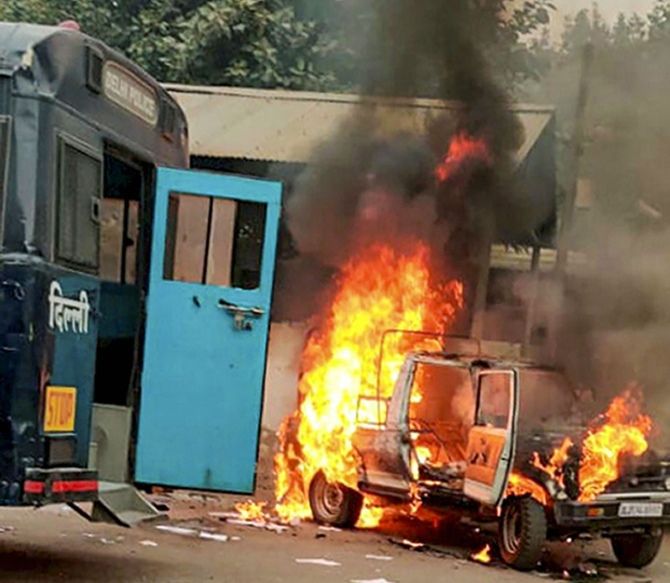 IMAGE: A police vehicle was set on fire and eight others were vandalised during the fracas. Photograph: PTI Photo

Secretary of Tis Hazari Bar Association Jaiveer Singh Chauhan said that a lawyer's car allegedly hit a police jail van following which an argument broke out between him and the police.

"He was then taken inside a lockup and beaten up badly. The SHO came but was not allowed inside. The district judges of the central and west district, along with six other judges went there but were unable to let the lawyer out," Chauhan alleged.

He further claimed that after about 20 minutes, the police fired four rounds of bullets while the judges were leaving the spot. IMAGE: A police vehicle was set on fire and eight others were vandalised during the fracas. Eight bikes were also torched. Photograph: Arun Sharma/PTI Photo

He claimed that one of the lawyers, Ranjeet Singh Malik, who was protesting outside along with others, suffered a bullet injury.

The injured lawyers were rushed to St Stephen's hospital, he said.

"The police manhandled the lawyers. This was an incident of complete negligence by the police," Chauhan alleged.

The lawyer was released from the lockup after about half an hour, he claimed. 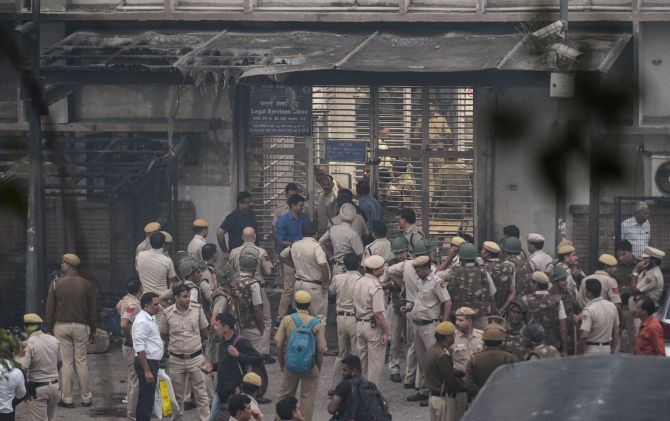 A police vehicle was set on fire and eight others were vandalised during the fracas. Eight bikes were also torched, the officials said, adding that the Fire Department dispatched 10 fire tenders to the spot.

A huge posse of police and anti-riot vehicles were deployed at the site after the violence.

The police said the situation is now under control and the undertrials who were stuck inside the court premises due to the clash were returned to their respective prisons in police vehicles. 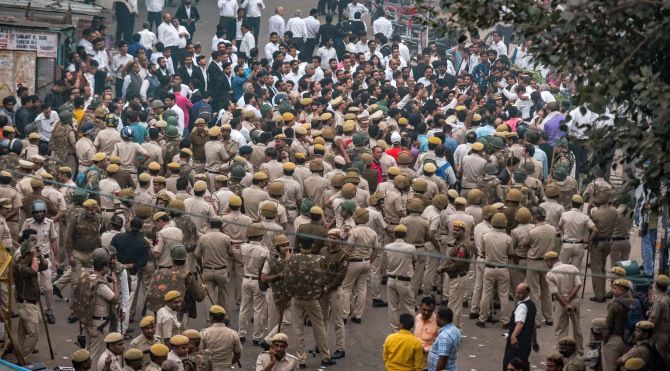 IMAGE: A huge posse of police and anti-riot vehicles were deployed at the site after the violence. Photograph: Vijay Verma/PTI Photo

Lawyers earlier sat on a protest at the gate of the court premises, demanding action against those responsible.

K C Mittal, Chairman of Bar Council of Delhi, said, "We strongly condemn the brutal and unprovoked attack on lawyers by police at Tis Hazari Court. One lawyer is critical. A young lawyer was beaten in lockup, a high-handedness of the police. They should be dismissed and prosecuted. We stand with Delhi lawyers." Delhi Congress chief Subhash Chopra visited the court complex along with party members and called for action against the personnel involved in the clash.

Assam Bar Council member Khushboo Verma, who was visiting for some work, alleged that she was attacked by policemen while protesting against the incident. "There were no women police personnel present," she claimed.