Prime Minister Narendra Modi on Sunday launched the ambitious Pradhan Mantri Kisan Samman Nidhi scheme transferring the first instalment of Rs 2,000 each to over one crore farmers, as he slammed the opposition alleging they "remember farmers once in 10 years -- just before elections". Initiating the electronic transfer of Rs 2,000 each, he said the first instalment of money under the scheme has been deposited in accounts of 1.01 crore farmers and those who have been left out will get it soon.

"The first instalment of money under the scheme has been deposited in the bank accounts of the farmers directly...those who have been left out will get it soon," Modi told the gathering at the Fertiliser Corporation of India ground Gorakhpur.

The prime minister also interacted with a select group of farmers, representing different states, through video-conferencing and took a swipe at his political rivals.

"They remember farmers once in 10 years -- just before elections. They get fever of loan waiver and distribute it as 'revari" (dole) to garner votes....they did not know that Modi will expose them this time," he said.

Modi started his speech by chanting 'Jai Jawan, Jai Kisan' and said that for his government, the Rs 75,000-crore scheme is not an election promise. He said he talked about it in Parliament only after making budgetary allocations for it.

"Loan waivers would have been easy and convenient for us too. We could also have distributed 'revari' for political and election benefits, but we can't commit such a sin. Loan waiver benefits only a select few," he said.

The PM urged the farmers to beware of any trap and rumours stressing "this is your money and it will not be taken back".

"The previous governments did not have the intention to help the farmers so they could not take the right decisions...and so in 2014 you gave the BJP an opportunity to change this situation," he said. 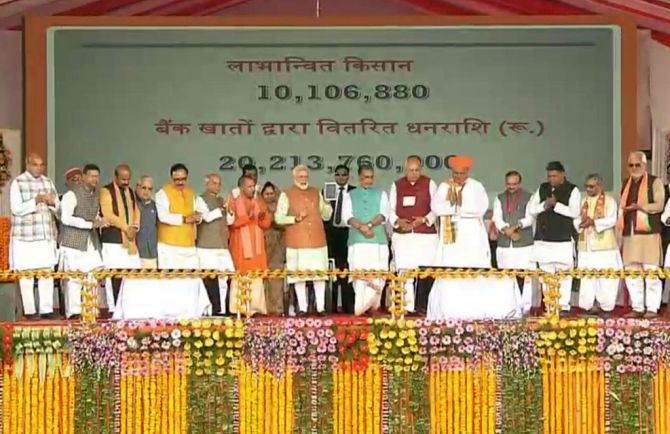 Modi said his government was working with complete honesty to provide all possible resources to help farmers double their incomes by 2022.

"The days are gone when the Rs 85 of the Rs 100 sent by the government used to be siphoned off by the middlemen," he said.

There is no role of middleman in this scheme, he said.

This scheme has been made foolproof and will be implemented with complete transparency, Modi said and asked state governments to come forward with list of farmers who would be its beneficiaries.

In the interim Budget 2019-20, the central government had announced the PM-KISAN scheme under which Rs 6,000 per year will be given in three instalments to 12 crore small and marginal farmers holding cultivable land up to two hectares.

Meanwhile, the Bharatiya Janata Party said the timing of government launching any welfare scheme should not be questioned as no time frame can be attached in advance to such measures.

BJP Kisan Morcha president and Bhadohi MP Virendra Singh Mast said, "It is wrong to say that the government is reminded of farmers during the election season only. There is no time frame decided in advance for taking any welfare step. The opposition parties have nothing to say." 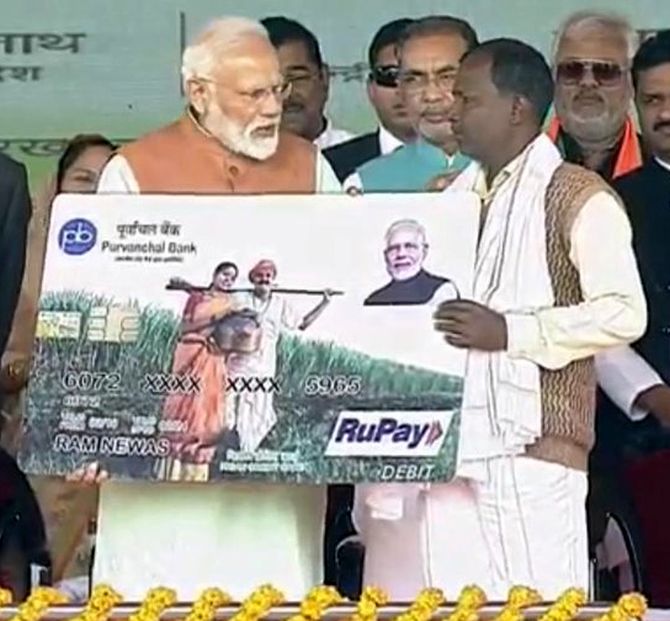 Mast said that a number of farmers welfare schemes were launched by the government in the past nearly five years.

Earlier, Uttar Pradesh Congress spokesperson Ashok Singh had termed the scheme, announced in the interim budget, as a mere "eyewash" and said it would not reach the genuine beneficiaries.

President of Rashtriya Kisan Manch Shekhar Dixit had also questioned the intention and the reach of the scheme.

Mast said, "It is amazing that those who had not even given even six paise for agriculture, are now questioning the move by the government to give Rs 6,000 a year to the farmers (under PM Kisan Samman Nidhi Yojana). By the end of February, the farmers will start getting the money in their accounts," he said.

"He cannot distinguish among the plants of paddy, barley, wheat and (maize). If he is able to distinguish the plants, I will garland and welcome him.

"Somebody might have told him that if he speaks against the prime minister, he will become a national leader," Mast alleged.

Photographs: Courtesy @BJP4India/Twitter
© Copyright 2021 PTI. All rights reserved. Republication or redistribution of PTI content, including by framing or similar means, is expressly prohibited without the prior written consent.