Prime Minister Narendra Modi on Sunday unveiled a 12-foot bronze statue of Swami Vivekananda in Malaysia, saying the sage is neither the name of a man nor identity of a system but personifies 1,000-year-old Indian culture. Addressing a gathering at the unveiling of Swami Vivekananda’s statue at the Ram Krishna Mission, Modi said it was Swami Vivekananda who first gave the concept of ‘One Asia’ that ASEAN and the East Asia Summits are talking about.

He said in tackling the two biggest problems facing the world -- climate change and terrorism -- truth is essential. Modi said when conflicts end terrorism will end.

The PM unveiled the bronze statue of Vivekananda amid cheers from the more than 2,000 Indians, most of them ethnic Indian-Malaysians.

Braving heavy monsoon rains, Modi was clad in a cream churidaar kurta with a red angavastram.

The statue, a gift from a Belur Math devotee in India, was installed at the Ramakrishna Mission Ashram in the suburb of Petaling Jaya near Kuala Lumpur.

Modi, who was welcomed by Swami Supriyananda who heads the mission, also released a book on yoga and wellness by yoga teacher Ajay Sahoo.

The statue was made by Anil Kumar Ghosh from Kolkata, The Ramakrishna Mission was set up here in 2001. 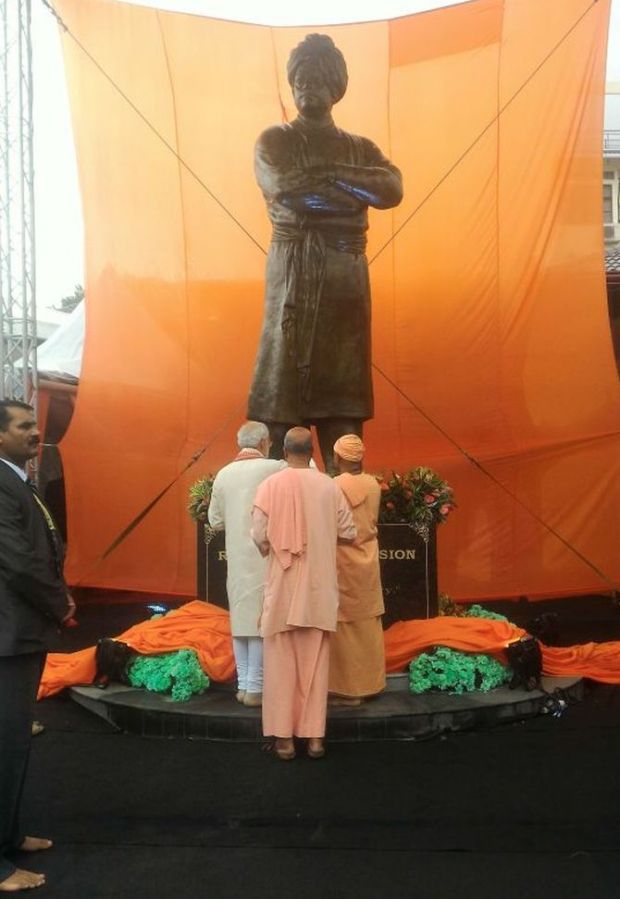 “Swami was given by God to India, I will give his statue to Malaysia,” Swami Supriyananda said.

Speaking in Hindi to the mostly Tamil audience, Modi said efforts should be made to “install Swami in our hearts and soul.” His speech was translated into English.

“Swami Vivekananda is not the name of a person. It is about the aatma (soul) of India,” he said.

Vivekanand is neither the name of a man nor identity of a system but personifies 1,000-year-old India’s culture, he said.

Noting that from the Vedas to Vivekananda, India’s culture is rich, he said India is moving from Upanishads to upgraha (satellites).

He quoted Vivekananda as saying “Jan Seva is Prabhu Seva” (public service is service of God).

Jaishree Balasubramanian
© Copyright 2021 PTI. All rights reserved. Republication or redistribution of PTI content, including by framing or similar means, is expressly prohibited without the prior written consent.