Prime Minister Narendra Modi was conferred the prestigious Seoul Peace Prize for 2018 on Friday for his contribution to international cooperation and fostering global economic growth. 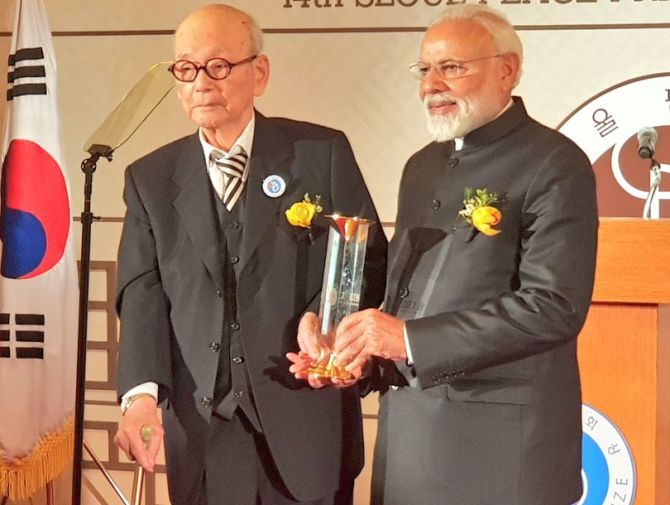 The award was presented to him by the Seoul Peace Prize Foundation at a grand ceremony. A short film on the life and achievements of Prime Minister Modi was also screened at the event.

Modi expressed his gratitude for the prestigious honour and said, “This award belongs not to me personally, but to the people of India.”

“The success that India has achieved in the last five years is due to aspirations, inspiration and efforts of the people of India. On their behalf, I accept the award and express my gratitude,” he said.

He said he was honoured that the award is being conferred on him in the year that India celebrates the 150th birth anniversary of Mahatma Gandhi.

He dedicated the $200,000 (Rs 1.4 crore) prize money to ‘Namami Gange Programme’, which is flagship programme of his government to accomplish the twin objectives of effective abatement of pollution, conservation and rejuvenation of River Ganga.

Modi is the 14th recipient of the award and the past laureates included former United Natons Secretary General Kofi Annan, German Chancellor Angela Merkel and renowned international relief organisations like Doctors Without Borders and Oxfam.

The Seoul Peace Prize was established in 1990 to commemorate the success of the 24th Olympic Games held in Seoul. The award was established to crystalise Korean people’s yearning for peace on the Korean peninsula and in the rest of the world. 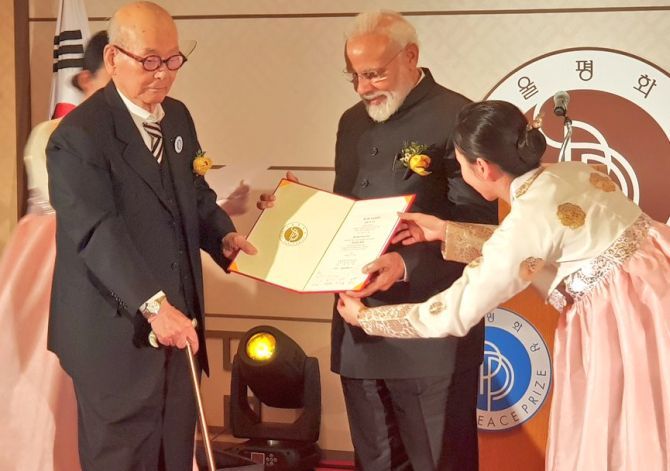 Speaking at the event, Prime Minister Modi expressed concern over the growing menace of terrorism and recalled that a few weeks before the Seoul Olympics in 1988, an organisation called Al Qaeda was formed.

“Today, radicalisation and terrorism have become global and are the biggest threats to world peace and security,” he said.

“The time has come for all those who believe in humanity to join hands, to completely eradicate terrorist networks, and their financing supply channels and counter-terrorist ideology and propaganda. Only by doing so, can we replace hate with harmony, destruction with development, and transform the landscape of violence and vendetta into a postcard of peace,” he added.

Modi lauded South Korean President Moon Jae-in for his role in overcoming the legacy of mutual-distress and suspicion between North Korea and the international community and bringing them to the discussion table.

“This is no small achievement,” he said and hoped that peace will soon prevail on the Korean peninsula.

The PM recounted several steps taken by his government in recent years, including several new initiatives, to take India on a forward trajectory.

“India’s growth story is not only good for the people of India but also for the entire world. We live in an increasingly interconnected world. Our growth and prosperity will inevitably contribute to global growth and development,” he said.

He also said that despite having a historically low carbon footprint, India has been playing an active role in the global fight against climate change.

“India, as a responsible member of the international community, has been in the forefront of our collective fight against climate change,” he added.

While conferring the award on Modi, the award committee recognised his contribution to the growth of Indian and global economies, crediting ‘Modinomics’ for reducing social and economic disparity between the rich and the poor.

The committee also credited him for his contribution toward regional and global peace through a proactive policy with countries around the world.