Delivering an unambiguous message to India's enemies, Prime Minister Narendra Modi on Saturday asserted that it will give a "prachand jawab" (fierce reply) if provoked, as he flew to Longewala Post to celebrate Diwali with soldiers, a custom he has been observing since assuming office in 2014. Addressing soldiers at the forward post, which has become a part of military legend after troops here successfully thwarted numerically higher Pakistani forces in the 1971 war, Modi took a swipe at China without naming it, saying the world is troubled by "expansionist forces" and expansionism shows a "distorted mindset" that belongs to the 18th century.

India has become a forceful voice against forces of expansionism, he said and also took aim at Pakistan, adding that Indian soldiers have hit "sponsors of terrorism" in their home, a reference to air and surgical strikes against terror camps in the neighbouring country. "No force in the world can prevent our brave soldiers from defending our borders. The world today knows that we will not compromise with our interests even one bit at any cost," he said amid a standoff with China at Ladakh border.

SEE: PM Narendra Modi took a ride on a tank in Longewala

He said India today believes in the policy of understanding others and making them understand but if it is tested, then it will give a fierce reply. The country has the capability and political will to give a befitting response to those who challenge it, he added.

The prime minister also underlined the importance of having strong capability, saying despite advanced international cooperation and equations, vigilance is the path to security, alertness leads to happiness and peace is the prize of having strength. "History of the world tells us that only those nations have remained safe and advanced who had the ability to take on invaders," he said, adding that 130 crore Indians stand with the country's soldiers and bow to their bravely.

"They are proud of your valour," he told soldiers, saying their bravery has got better of all adversities, be it in deserts, forests or deep oceans.

Modi said his Diwali is complete only after he comes among soldiers, adding he cannot stay away from his own on this festival. He said the more time he spends with the soldiers, the stronger his resolve to serve and protect the country gets.

"Your sacrifices teach the country discipline and sense of service," the prime minister told soldiers, referring to his government's efforts to combat the coronavirus and also to restart the economic activity fully.

SEE: Modi distributes sweets among jawans during his visit to Longewala

Urging soldiers to make innovation and yoga a part of their daily lives, he also asked them to learn one language other than Hindi, English and their mother tongue, saying it will enrich their lives.

The prime minister referred to his government's stress on self-reliance and 'vocal for local' campaign, and complimented the armed forces for the decision to bar import over 100 weapons and defence equipment.

Recalling the glorious battle of Longewala, he said it will always be remembered in the annals of strategic planning and military valour.

He said this was the time when the ugly face of Pakistan was exposed as its army was terrorizing innocent citizens of Bangladesh and committing atrocities against women. 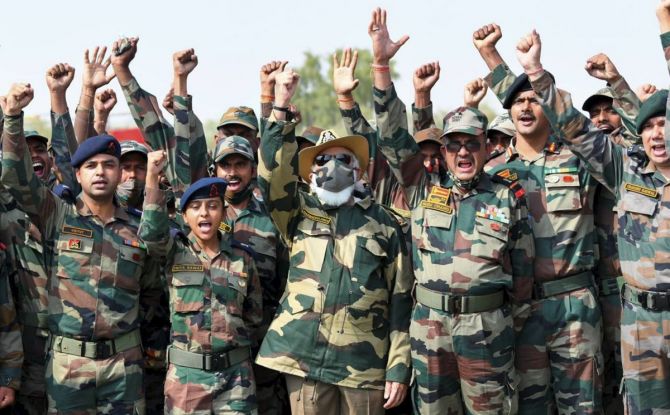 "Pakistan opened the front on western border to divert the global attention but our forces gave them a befitting reply," he said.

On the occasion, he recalled the fierce fight the post had witnessed in the 1971 war against Pakistan and paid tributes to Brig Kuldeep Singh Chandpuri, a hero of the battle who was then a Major, saying he became "rashtra deep" with his feat of bravery. It was also an example of exemplary coordination among Army, Navy and Air Force, he said.

India had defeated Pakistan in the 1971 war, leading to the independence of Bangladesh.

Modi has been visiting forward posts every Diwali since his government came to power in 2014. He was in Rajouri last year, in Uttarakhand in 2018 and in Gurez in 2017.