In a veiled attack on the Congress ahead of Gujarat polls, Prime Minister Narendra Modi on Tuesday said some parties and governments in the past have tried to run down and erase the contributions of Sardar Vallabhbhai Patel in unifying the country immediately after Independence. 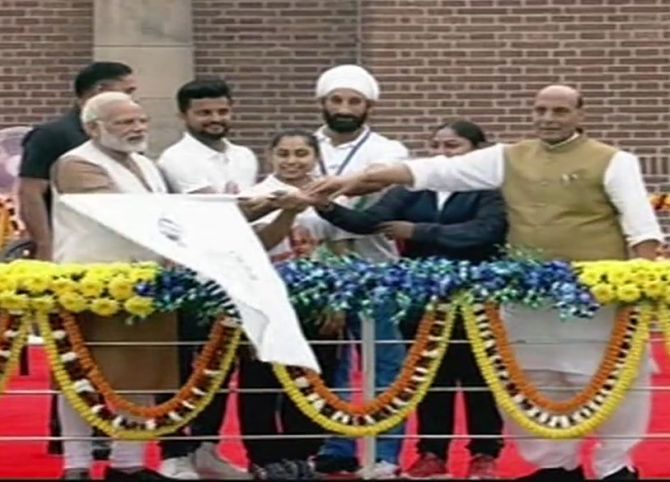 Flagging off a run to commemorate the 142nd birth anniversary of Patel, Modi said due to the statesmanship and political acumen of the country’s first home minister, India is united today despite the colonial rulers’ wish that it was disintegrated into smaller states after Independence.

“The youth of India respects him and his contribution towards the building of our nation,” he noted.

Modi’s comment bears significance as it came ahead of the assembly elections in Gujarat, the state Patel belonged to.

Paying rich tribute to Patel, the prime minister said he had not only saved the country from the difficulties being faced immediately after Independence, but succeeded in uniting the whole nation. IMAGE: Before the run, the PM along with the President and Vice President and other senior leaders paid tributes to Sardar Patel. Photograph: Press Information Bureau

“The British government wished that India was disintegrated into smaller states. But Patel used all means (Sam, dam, dand, bhed, rajneeti, kutneeti) and succeeded in uniting all princely states into a single nation within a very small span of time,” he said.

Modi said generation after generation of Indians will continue to remember Patel, particularly the youth, who will carry forward his legacy.

The ‘Run for Unity’, which began from the Major Dhyan Chand National Stadium, saw the participation of a large number of people, including sports personalities like Sardar Singh, Deepa Karmakar, Suresh Raina and Karnam Malleswari.

The 1.5 kilometre run came to an end near the India Gate C-Hexagon-Shah Jahan Road radial.

The prime minister said everyone in the country is proud of Patel’s contribution to India before it attained freedom and during the early years after the nation became independent.

“We salute Sardar Patel on his jayanti. His momentous service and monumental contribution to India can never be forgotten,” he said. Stressing that the diversity is India’s strength, Modi said there are many languages, religion, culture, customs, lifestyles and food habits.

The prime minister said first President of India Rajendra Prasad had said that India has become a united nation only due to administrative acumen and strong leadership of Patel but the country was not giving him due respect.

“Rajendra Babu must be happy now, wherever is his soul, that we are remembering the contribution of Patel even though some people tried to run down and erase his contribution. The nation will continue to remember Patel,” he said.

Modi said in some countries, people of the same faith are even not ready to tolerate each other and want to harm and kill each other.

But in India, there is diversity yet all are united.

“Our country must remain united. It is the responsibility of the 125 crore people to ensure that India remains united,” he said.

At the beginning of his speech, Modi also paid tribute to former Prime Minister late Indira Gandhi on her death anniversary.

Paying tribute to Patel, Home Minister Rajnath Singh said apart from uniting the nation, Patel also succeeded in facing the challenge of communal violence which broke out soon after the Independence.

“Sardar Patel was the main force behind upholding India’s unity and integrity at the time of Independence,” he said.

Hockey player Sardar Singh said ‘Run for Unity’ is a commendable initiative to showcase the country’s unity and integrity.

Gymnast Deepa Karmakar said she was proud to be part of the run, which is being organised to remember the contributions of Patel in unifying the country.