PHOTOS: PM in Maldives on his 1st foreign visit after re-election

Prime Minister Narendra Modi arrived in the Maldives on Saturday on his first foreign visit after his re-election to strengthen the bilateral ties, reflecting the importance India attaches to its 'Neighbourhood First' policy.

On the first day, Modi was conferred with the Maldives' highest honour "Rule of Nishan Izzuddeen".

The two countries also signed six agreements to strengthen bilateral ties in a number of key areas including defence and maritime.

Here's is a look at Modi's first day in the island nation. Modi greets Indian community on his arrival in Male. Indians are the second largest expatriate community in the Maldives with approximate strength of around 22,000. Photograph: Press Information Bureau 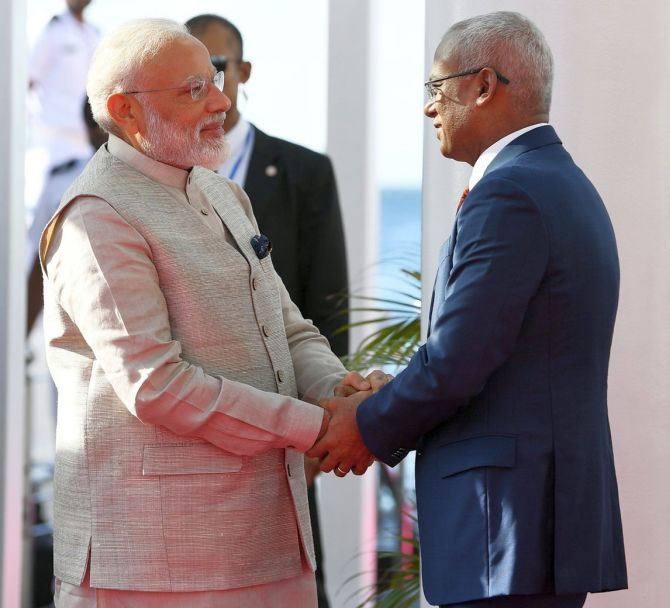 President of Maldives Ibrahim Mohamed receives Modi on his arrival at the Republic Square in Male. Photograph: Press Information Bureau 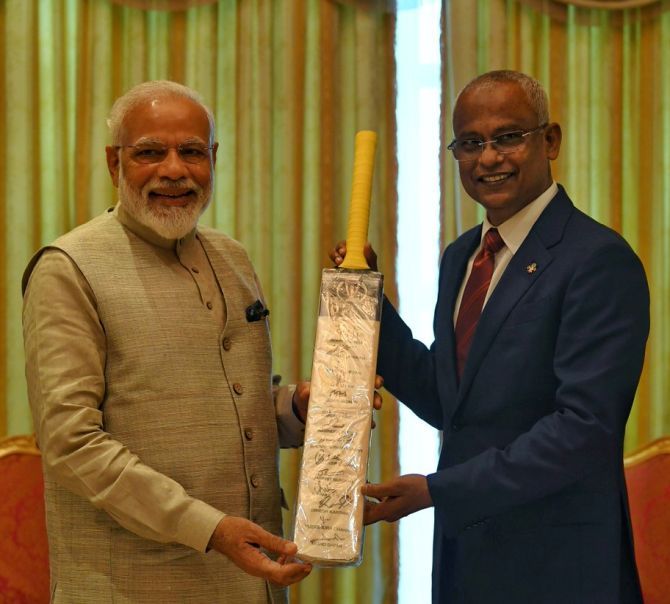 Modi gifted a cricket bat to Solih signed by the Indian cricket team after holding bilateral talks. "Connected by cricket! My friend, President Solih is an ardent cricket fan, so I presented him a cricket bat that has been signed by Team India playing at the CWC2019," Modi said on Twitter. Photograph: Press Information Bureau India is helping in training Maldivian cricket players and bringing it up to the requisite standard. India is also looking into constructing a stadium in the Island nation which is another request made by it. Photograph: @narendramodi/Twitter The two countries signed six agreements to strengthen bilateral ties in a number of key areas including defence and maritime. The first Memorandum of Understanding was for cooperation in the fields of hydrography. Another was on health. The other agreements included on the establishment of passenger and cargo services by sea, cooperation in customs capacity building between the Central Board of Indirect Taxes and Customs of India and the Maldives Customs Service. An MoU was also signed between the National Centre for Good Governance, Department of Administrative Reforms and Public Grievances and Maldives Civil Service Commission on Training and Capacity Building Programme for Maldivian civil servants. Photograph: Press Information Bureau 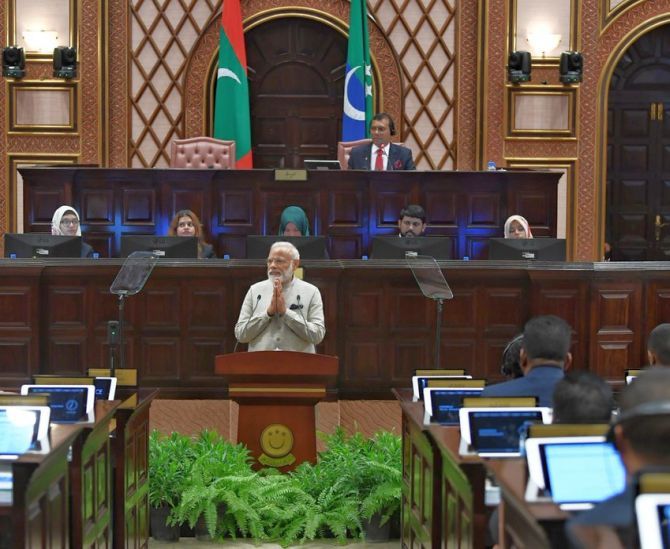 The prime minister addressed the Maldivian Parliament, the Majlis. During his addresses, Modi said that relations between India and Maldives are older than history. Without naming Pakistan, the PM said that state sponsorship of terrorism is the biggest threat the humanity is facing today as he urged the world leaders to unite for combating the menace. Photograph: Press Information Bureau