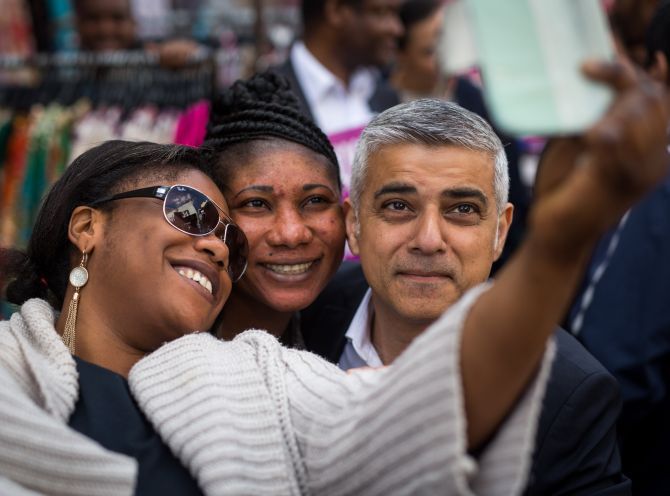 Sadiq Khan, the son of a Pakistani bus driver, was on Saturday declared the new London mayor after he beat his nearest rival in what is being described as a landslide, marking the return of Labour rule to the United Kingdom capital after eight years.

The 45-year-old Opposition candidate takes charge as the first Muslim head of City Hall in London as counting in the so-called “Super Thursday” polls came to a close.

Khan’s win seemed inevitable as all first preference votes were counted, giving him a 46 per cent vote share, nine points ahead of rival Zac Goldsmith.

It marks the return of Labour rule to the British capital after eight years of Conservatives in power.

Though it appeared mathematically impossible that Goldsmith could catch him on second-preference votes, but the count had to officially go into second preference votes to cover the 50 per cent vote share required for a clear victory.

Labour leader Jeremy Corbyn tweeted his congratulations to Khan way before the formal announcement: “Can’t wait to work with you to create a London that is fair for all! #YesWeKhan.”

It is believed that the high turnout helped Khan after 45 per cent of Londoners came out to vote on Friday and he bagged an estimated 1.1 million votes.

Khan is a former human rights lawyer and an MP from Tooting, east London, since 2005. A prominent figure in former Labour Prime Minister Gordon Brown’s Cabinet, he resigned from the shadow Cabinet last year to launch his campaign to replace Boris Johnson -- whose second and final term ended on Friday.

Oxford-educated Goldsmith, the son of late billionaire Sir James Goldsmith and brother of Jemima Khan, trailed through most of the mayoral campaign -- attributed by some to his camp’s failed attempts to link Khan with extremist personalities.

Jemima, ex-wife of Pakistani cricketer-turned-politician Imran Khan, tweeted as the results became clear: “Sad that Zac’s campaign did not reflect who I know him to be -- an eco-friendly, independent-minded politician with integrity.”

Voters were able to register their first and second preferences for mayor, and two types of London Assembly member -- one for their area and one for the city. 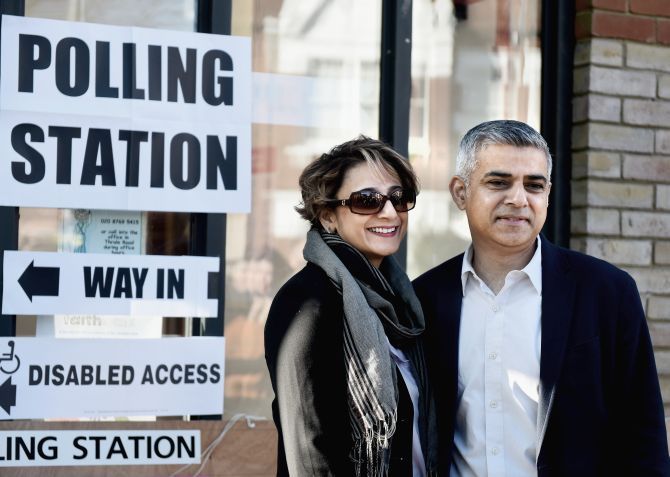 The new mayor has control over four major policy areas in London -- transport, policing, environment, and housing and planning -- under the London assembly’s scrutiny. The assembly must also be consulted over the Greater London Authority budget. It can reject mayoral policies or amend the draft budget if two-thirds of assembly members agree to do so.

“The vile campaign run by the Tories, the way they’ve tried to smear Sadiq Khan, the methods they’ve used and the language they’ve used, has had a very big effect in exactly the way they didn’t want. So many people are just revolted by what was said about Sadiq, yesterday they came out and voted for us,” said Corbyn, in reference to the Conservative party’s attempts to link Khan with extremist views in the UK capital.

Corbyn, however, has not had a very successful result overall in elections that were widely seen as a test for his leadership.

Khan’s personal triumph was in stark contrast of his party’s poor showing in the country-wide local elections. The party registered major losses in Scotland, where it was pushed into third place by a resurgent Scottish Conservative party.

But it managed to hold most of its ground in the Welsh assembly and English council elections.

The close shave aspect for the UK’s Opposition party was clear as Corbyn told supporters: “All across England last night we were getting predictions that we were going to lose councils. We didn’t. We hung on and we grew support in a lot of places.”

The ruling Conservative party, meanwhile, is spinning the results as a vote of confidence in the central government.

Britain’s Prime Minister David Cameron said: “The ‘Super Thursday’ elections show that Labour has completely lost touch with the people it is supposed to represent.

“Local election day for sitting Prime Ministers is supposed to be a day of dread. It’s meant to be a day when you are sitting there waiting for someone to knock on the door like the condemned man waiting for the hangman. That wasn’t what it was like last night.”

Besides Scotland and Wales, in total 2,747 seats in English councils, spanning metropolitan boroughs, unitary authorities and district councils, were up for elections.

The majority of the seats were last contested in 2012.

Saturday’s polls were seen as the single-largest test of political opinion before the next general election, which is scheduled for 2020.