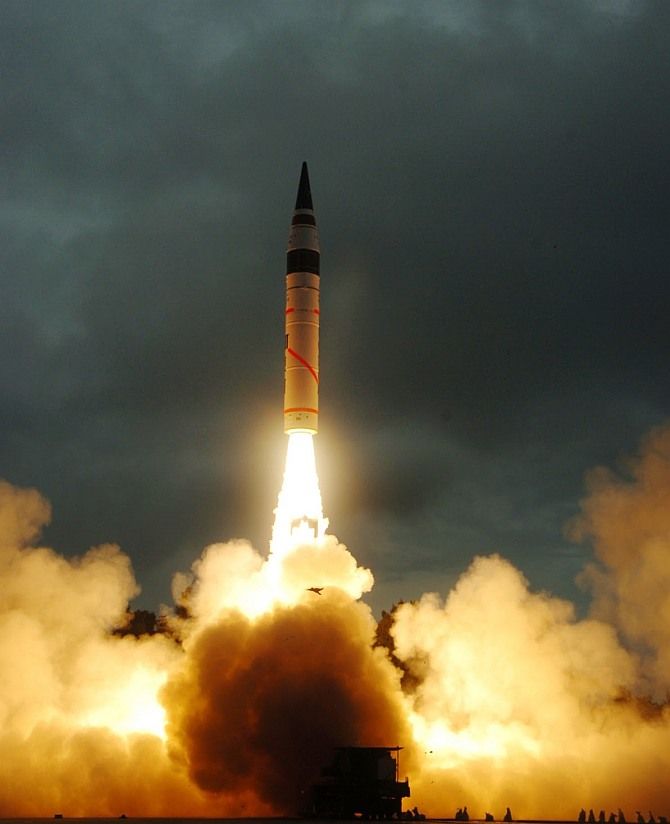 India is behind Pakistan with regards to nuclear warheads but beats Israel as well as North Korea, a report by the Stockholm-based Stockholm International Peace Research Institute revealed.

The other nuclear weapon-possessing states have much smaller arsenals, but have all either begun to deploy new nuclear weapon delivery systems or announced their intention to do so, it added.

If all nuclear warheads are counted, these states together possessed a total of approximately 15,395 nuclear weapons compared with 15,850 in early 2015, the report said.

Rediff.com present a comprehensive listing of these nations and their collective and active nuclear stockpile, based on the study's findings. 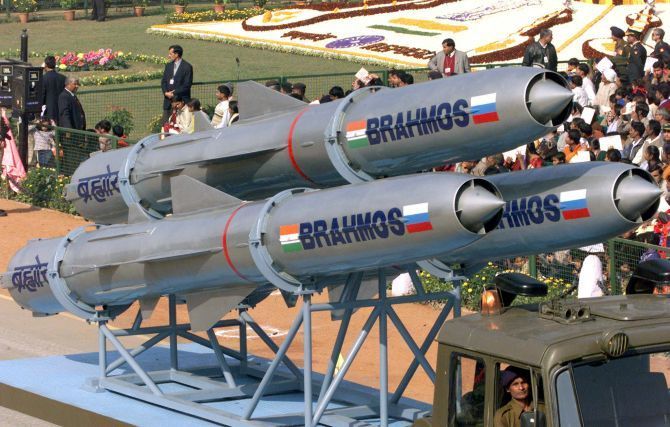 IMAGE: The study estimates an increase in the size of the Indian nuclear stockpile from the 90-110 warheads estimated in January 2015. Photograph: Reuters 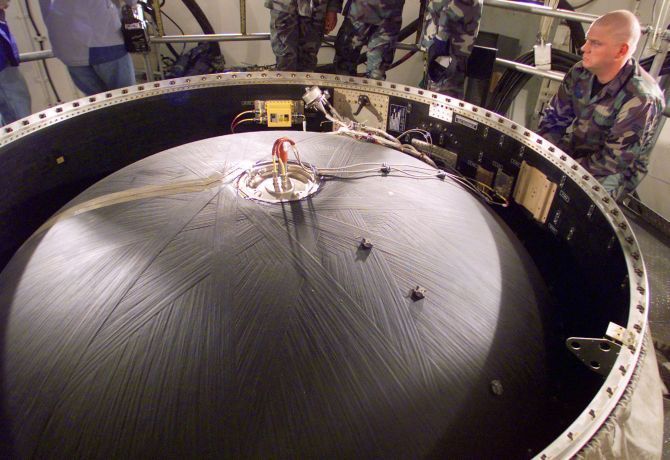 IMAGE: The US is planning significant redesigns of its employed nuclear warheads mounted on ballistic missiles, known as interoperable warheads, which mix components from different types of existing warheads into new designs. Photograph: Rick Wilking/Reuters

As of January 2016, the USA maintained a stockpile of approximately 4,500 operational nuclear warheads.

This included approximately 1,930 deployed nuclear warheads, consisting of roughly 1,750 strategic and 180 non-strategic (tactical) warheads. In addition to this deployed arsenal, about 2,570 warheads were held in reserve, and another roughly 2,500 retired warheads were scheduled for dismantlement, for a total US stockpile of approximately 7,000 warheads.

The USA has plans to invest in its nuclear infrastructure. These include modernizing nuclear command and control facilities and building new nuclear weapon production and simulation facilities 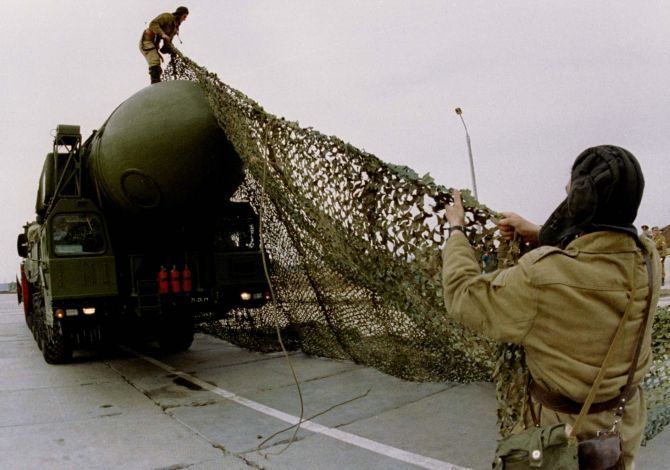 As of January 2016, Russia maintained an arsenal of approximately 4,490 nuclear warheads assigned to nuclear-capable delivery vehicles.

About 2,540 of these are strategic warheads, of which around 1,790 are deployed on ballistic missiles and at bomber bases. Russia also possessed nearly 1,950 non-strategic (tactical) nuclear warheads, all of which are in central storage. A further 2,800 warheads are in reserve or retired and awaiting dismantlement, for a total Russian stockpile of roughly 7,290 warheads.

The size of Russia’s nuclear arsenal is expected to decline further over the next decade, even without a follow-on arms reduction treaty, due to financial constraints. 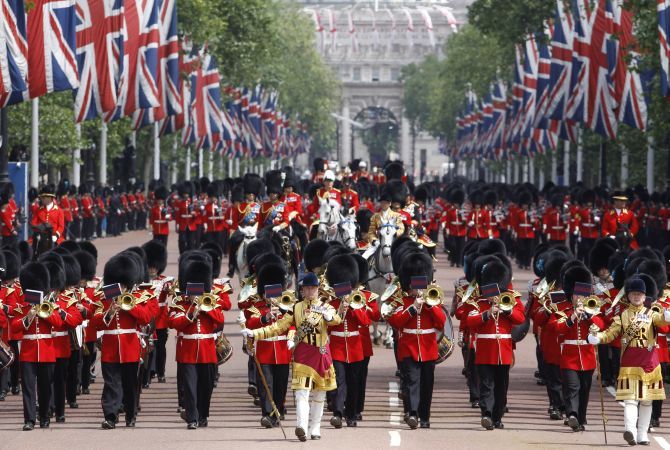 IMAGE: According to the study, the overall size of the nuclear stockpile, including non-deployed warheads, will decrease to no more than 180 by the mid-2020s. Photograph: Suzanne Plunkett/Reuters

As of January 2016, the British nuclear stockpile consisted of approximately 215 warheads.

In its 2015 Strategic Defence and Security Review, the British government reaffirmed plans to cut the size of the nuclear arsenal. The stockpile of operationally available nuclear warheads has already been reduced from 180 to the new limit of 120. The overall size of the nuclear stockpile, including non-deployed warheads, will decrease to no more than 180 by the mid-2020s. 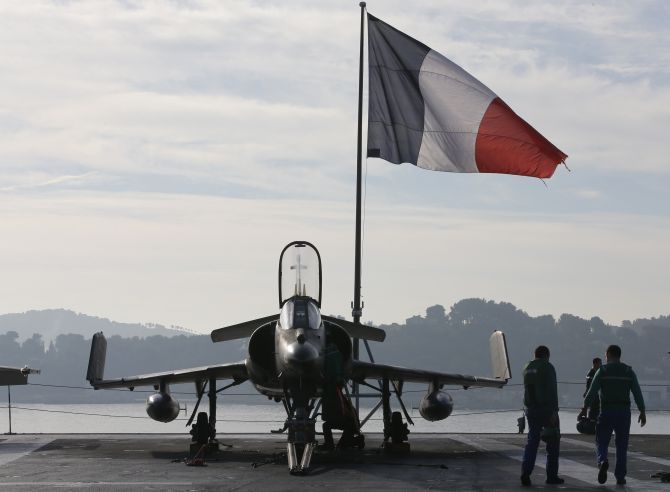 IMAGE: The main component of France’s nuclear arsenal consists of four Triomphant class SSBNs. The French Navy is modernizing the Triomphant class submarines to carry the M51 SLBM, with the work expected to be completed by 2019. Photograph: Reuters

The French Navy is modernizing the Triomphant class submarines to carry the M51 SLBM, with the work expected to be completed by 2019. 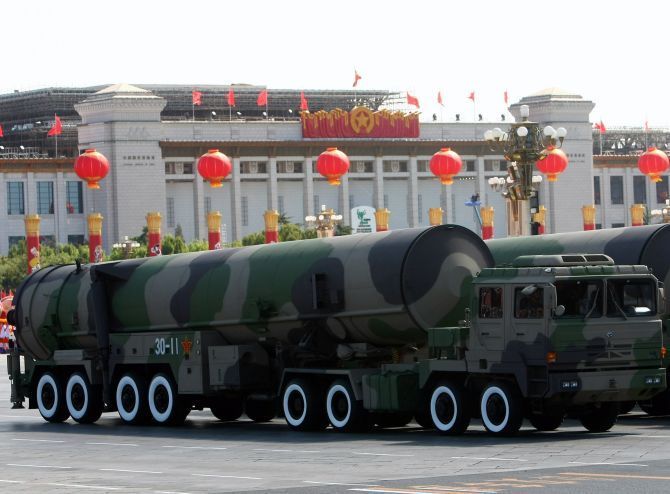 IMAGE: Of China’s triad of land, sea and air-based nuclear forces, only the land-based ballistic missiles and nuclear-configured aircraft are currently considered operational (with aircraft only in a secondary nuclear role). Photograph: Feng Li/Getty Images

China maintains an estimated total stockpile of about 260 nuclear warheads, a number that has remained relatively stable over many years but is slowly increasing.

In 2015, China published its latest biennial defence white paper, which reaffirmed that China’s nuclear strategy is defensive in nature and that its nuclear forces have only two purposes -- ‘strategic deterrence and nuclear counterattack’. These forces are maintained at the minimum level required for safeguarding China’s sovereignty and national security. 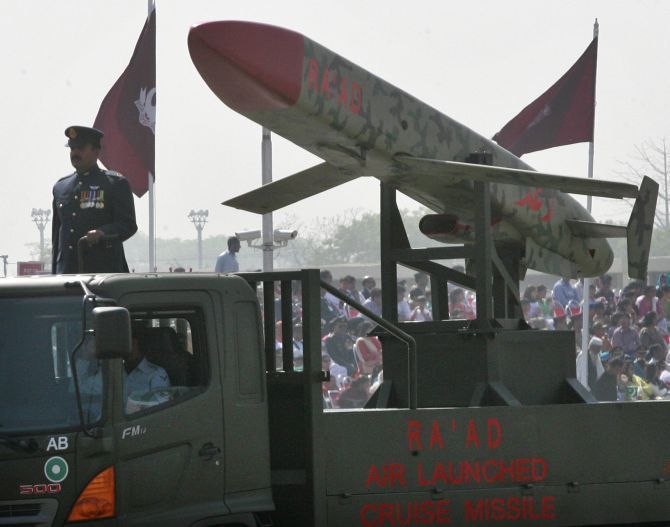 IMAGE: Pakistan has developed nuclear-capable short-range missiles that appear to be intended for tactical nuclear roles and missions with their purpose apparently to off set India’s superior conventional forces in limited conflict scenarios. All photographs: Mian Khursheed/Reuters

Pakistan has acknowledged that it is seeking to match India’s nuclear triad by developing a sea-based nuclear force. There has been considerable speculation that the sea-based force will initially consist of nuclear-armed, submarine-launched cruise missiles deployed on submarines or on surface ships. 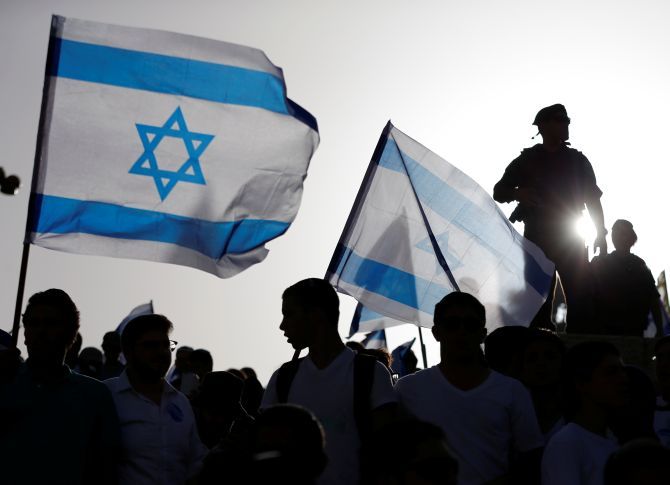 Israel continues to maintain its long-standing policy of nuclear opacity. It neither officially confirms nor denies that it possesses nuclear weapons. Israel is estimated to have approximately 80 nuclear weapons.

There are unconfirmed reports that Israel may be equipping its fleet of six German-built Dolphin class diesel-electric submarines with SLCMs. Israel has consistently denied these reports, and the reliability of many of them is uncertain. 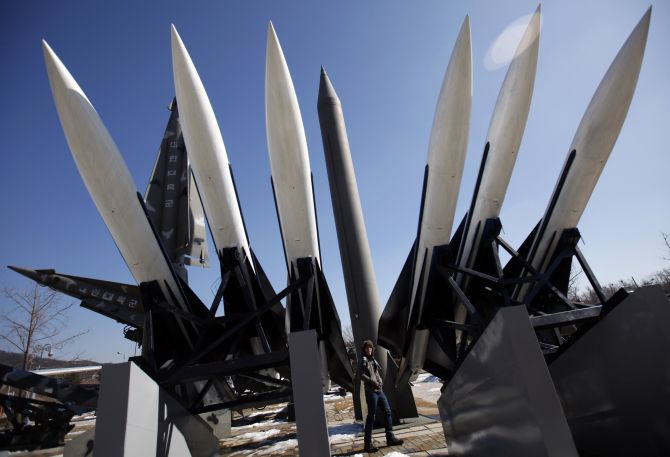 IMAGE: There has been considerable speculation that North Korea is seeking to build nuclear weapons using spent fissile material in order to overcome the constraints imposed by its limited stock of weapon-grade plutonium. Photograph: Kim Hong-Ji/Reuters

It is estimated that North Korea may have built up to 10 nuclear warheads, although there is no open-source evidence that it has produced or deployed operational weapons. The estimate is based primarily on calculations of the amount of plutonium that may have been produced by the graphite-moderated reactor located at the Yongbyon nuclear centre.

The table below presents the status quo of warheads, both active and reserve, that are at the disposal of the nuclear nations.

* Deployed means that the warheads is placed on missiles or located at bases with operational forces. 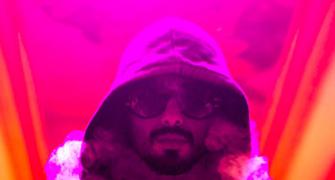 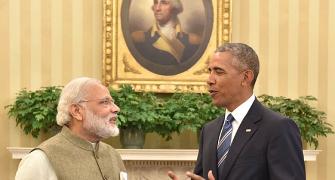 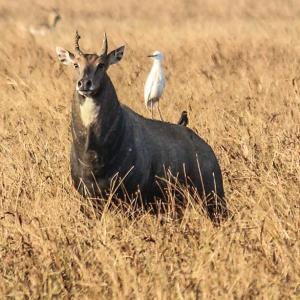