A Pakistani drone, loaded with a sophisticated rifle and seven grenades, was shot down by the Border Security Force along the International Border in Kathua district of Jammu and Kashmir on Saturday, officials said. 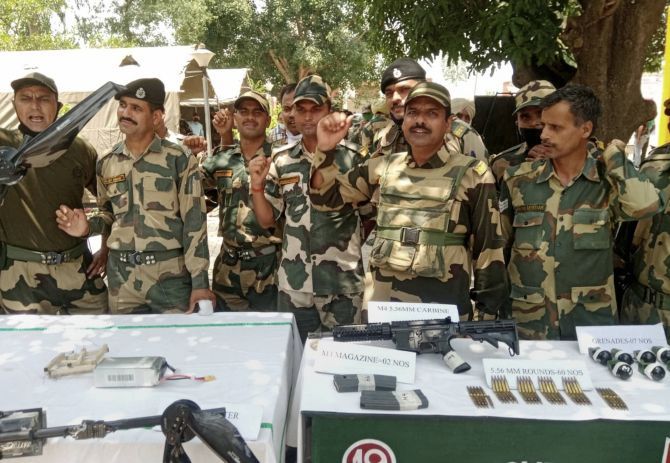 IMAGE: BSF personnel shot a Pakistani drone, loaded with a sophisticated rifle and some grenades along the International Border, at Rathua area of Hiranagar sector in Kathua, on Saturday. Photograph: PTI Photo

This is the first such incident in Jammu region when a drone carrying arms and explosives was shot down by the BSF, frustrating Pakistan's attempt to smuggle weapons into the Union Territory using the hexacopter, they said.

The China-made hexacopter, weighing about 17.5 kg and having a payload of 5.5 kg including a sophisticated US-Made M4 semi-automatic carbine and seven Chinese grenades, was spotted hovering in the skies by a BSF patrol party at Rathua village in the vicinity of Border Out Post (BOP) Pansar around 5.10 am and was shot down by the guards who fired at least nine rounds, the officials said.

They said it entered into this side from Pakistan and such attempts have been made in various sectors over the past one year. 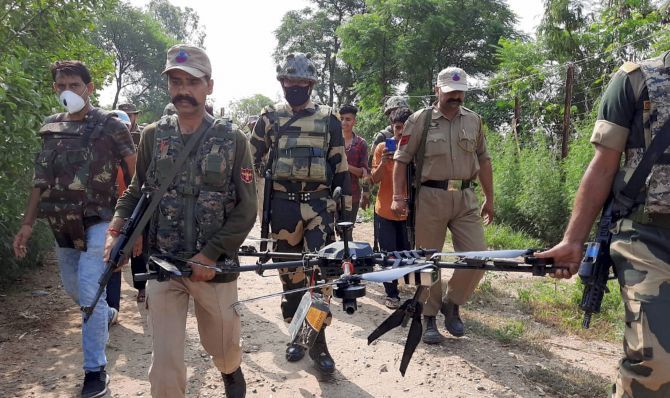 There were intelligence inputs about possible use of drones for smuggling arms and ammunition from Pakistan.

"This is the biggest achievement and averted a major incident. We are alert to the situation and keeping an eye on 'aakash' (sky), 'zameen' (land) and 'paataal' (subterranean) activities," Inspector General of BSF, Jammu frontier, N S Jamwal who rushed to the Hiranagar sector, told reporters there.

He said the 8 ft x 6.2 ft drone came from Thakurpora post in Narowal Shakargarh sector in Pakistan and was carrying the M4 semi-automatic carbine machine, its two magazines, seven Chinese grenades and some other items. 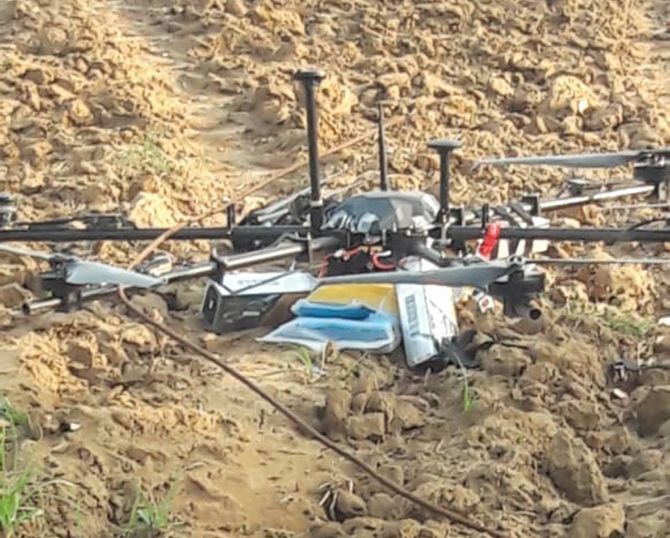 IMAGE: There were intelligence inputs about possible use of drones for smuggling arms and ammunition from Pakistan. Photograph: PTI Photo

"It was 150 to 200 ft above the surface and had entered 250 to 300 metres into this side. Most of its parts are Chinese made and connected with the Winch system which is used to drop the payload at the receiver's end and accordingly disconnect it so that it can return to Pakistan," the IG said.

He said the police have started an investigation and 'we are hopeful of getting further leads' to identify the person who was supposed to receive the arms consignment.

"Had the weapons fallen into the hands of a terrorist, he could have launched an attack within a shortest possible time. We do not rule out an attempt to carry out an immediate attack using the the weapons," the officer said in response to a question. 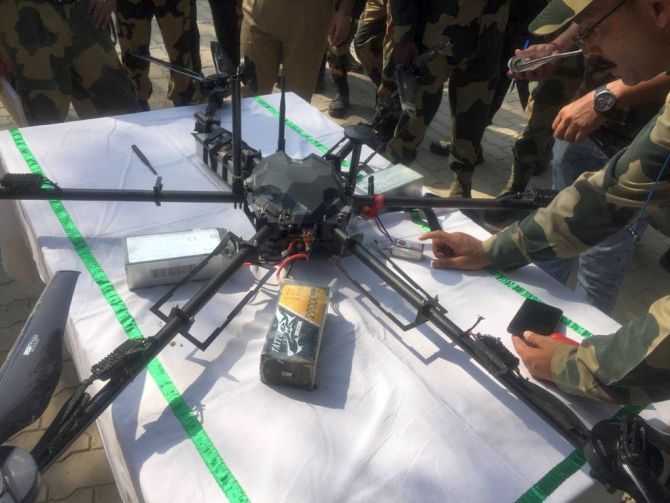 IMAGE: This is first such incident in Jammu region when a drone carrying arms and explosives was shot down by the BSF. Photograph: ANI

He said dropping weapons by drones is a 'new dimension' and 'we are working to strengthen our system to counter the challenge'.

"Intelligence inputs are continuously pouring about Pakistan's attempt to smuggle weapons through drones and we were alert to the threat. Many incidents of drones delivering consignment of arms in Punjab have come to light over the past one year and accordingly measures have been taken," he said.

Referring to the seizure of M4 rifle, he said it is a matter of investigation how the weapon reached Pakistan and subsequently to terrorists.

"It is a very serious issue and needs further investigation." 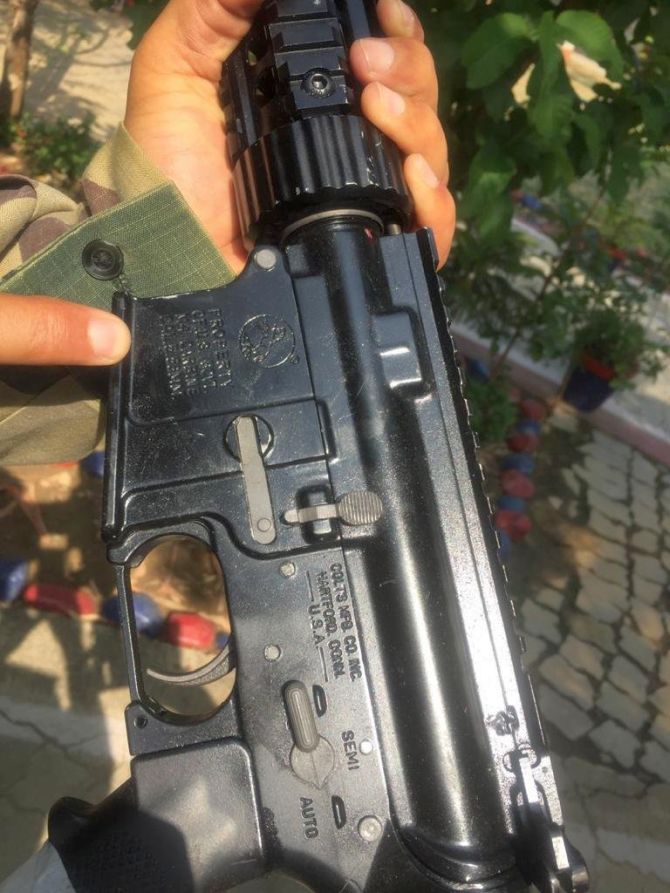 Officials said weapons of the same make including an M4 rifle were recovered from Jaish-e-Mohammed terrorists who were killed in an encounter with security forces at Nagrota in Jammu while they were travelling in a truck to Kashmir in January after infiltrating into this side from Pakistan.

"This is part of the ploy by Pakistan agencies at arming JeM terrorists in Kashmir to carry out acts of violence and disrupt peace and order. Similar attempts to smuggle have been foiled earlier in other areas bordering Pakistan, especially in Kupwara, Rajouri and Jammu sectors," a security official said.

In a press release, the BSF said the intelligence branch of the force was receiving inputs about possible use of drones for smuggling arms and ammunition from Pakistan into Indian side.

"Accordingly the troops were put on high alert and the border domination was exponentially increased, leading to the successful downing of the hexacopter," it said.

Meanwhile, the officials said Pakistani Rangers fired a few rounds on Babiya post in Hiranagar sector around 8.50 am.

There was no retaliation by the BSF guarding the IB, they said, adding the situation is being monitored closely.