COVID-19 cases in India crossed the 50,000 mark in a single day for the first time, pushing the virus tally to 15,83,792, while the recoveries went past 10 lakh on Thursday, according to the Union health ministry data. IMAGE: Municipal workers and family members wearing protective suits carry the body of a person who died of COVID-19 for burial, in Karad. Photograph: PTI Photo

The country registered a record increase of 52,123 infections in a span of 24-hours, while the death-toll climbed to 34,968 with 775 people succumbing to the disease in a day, the data updated at 8 am showed.

There are 5,28,242 active cases of coronavirus infection in the country presently.

The recovery rate among COVID-19 patients was recorded at 64.44 per cent, while the fatality rate was at 2.21 per cent. The total number of confirmed cases also includes foreigners.

The number of tests for detection of COVID-19 has crossed the 18-million mark in the country. According to the Indian Council of Medical Research, a cumulative total of 1,81,90,382 samples have been tested up to July 29 with 4,46,642 samples being tested on Wednesday. IMAGE: A healthcare worker wearing a PPE kit shows a drawing made by a child who is being treated for COVID-19 at CWG COVID Care Center in New Delhi. Photograph: ANI Photo

Nine fatalities have been reported each from Bihar and Jharkhand, seven from Haryana, six from Rajasthan, five from Odisha, four from Assam, three from Goa, two each from Uttarakhand and Chhattisgarh and one each from Kerala and Andaman and Nicobar Islands. IMAGE: A health worker collects a sample of an infant for the COVID-19 test, in Patna. Photograph: ANI Photo

Puducherry has registered 47 deaths, Chhattisgarh 48, Goa 39, Tripura 21, Chandigarh and Himachal Pradesh 14 each, Ladakh six, Meghalaya and Nagaland five each, Arunachal Pradesh three, Dadra and Nagar Haveli and Daman and Diu and Andaman and Nicobar Islands two each and Sikkim one. 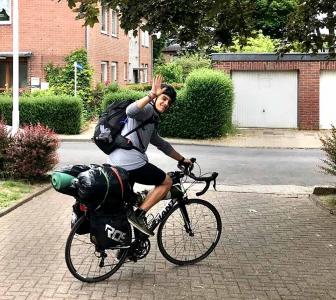 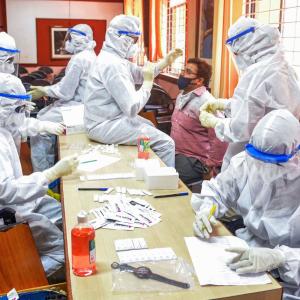