Over 230 Indians evacuated from coronavirus-hit Iran

Two Air India flights carrying over 230 Indians from coronavirus-hit Iran landed in Jaisalmer on Sunday morning and the passengers have been quarantined at the Indian Army Wellness Centre at Jaisalmer. 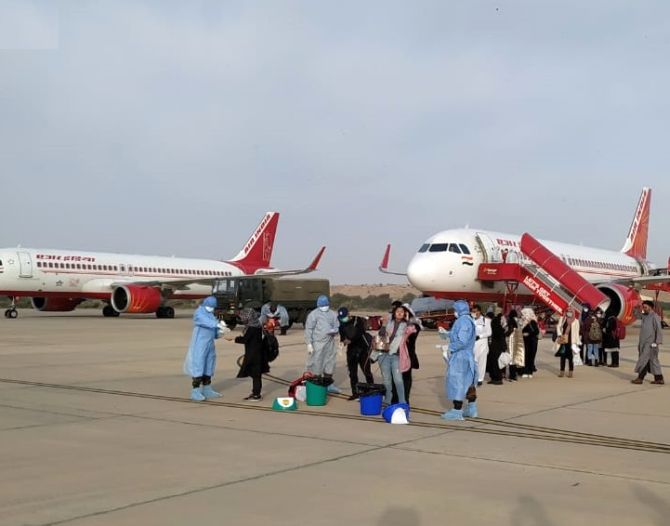 IMAGE: Indian nationals who were evacuated from Iran arrive in Jaisalmer. Photograph: ANI

While external affairs minister S Jaishankar said that a total of 234 Indians have been evacuated from Iran, defence spokesperson Col Sombit Ghosh said, "236 persons have landed in Jaisalmer by two Air India flights this morning."

"234 Indians stranded in Iran have arrived in India; including 131 students and 103 pilgrims.Thank you Ambassador Dhamu Gaddam and @India_in_Iran team for your efforts. Thank Iranian authorities," Jaishankar tweeted.

"They are being quarantined at the Indian Army Wellness Centre at Jaisalmer," Col Ghosh said.

The centre is fully equipped and a functional facility to help Indian citizens undertake the mandatory quarantine period under the supervision of skilled medical authorities.

Soldiers have volunteered to provide care and support to the countrymen returning from overseas, he said. 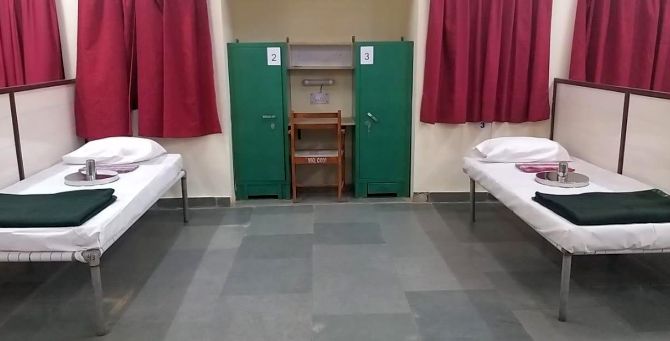 IMAGE: The passengers have been quarantined at the Indian Army Wellness Centre at Jaisalmer. Photograph: ANI

The Army Wellness Centre is working in synergy with the Civil Administration, Airport authorities and Air Force to ensure proper care is provided to the evacuated citizens.

This is the third batch of Indians evacuated from Iran.

Iran is one of the worst-affected countries by the coronavirus outbreak and the government has been working on plans to bring back Indians stranded there.