Agitating junior doctors in West Bengal on Friday were in no mood to relent as they demanded chief minister Mamata Banerjee's unconditional apology and set six conditions to the adminstration for withdrawal of their stir, which has disrupted healthcare services in the state and spiralled to other parts of the country. 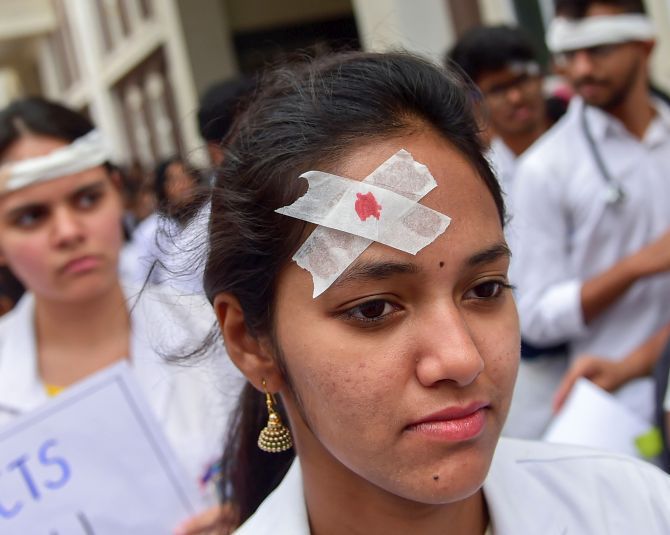 IMAGE: A medical student from Bengaluru during a demonstration protest to show solidarity with their Kolkata counterparts Photograph: Shailendra Bhojak/PTI Photo

Over 200 senior doctors of various state-run hospitals across West Bengal tendering resignation from their services to show solidarity with the agitators.

Late in the evening, Banerjee met the senior doctors and later invited the agitators for talks on Saturday but they declined the offer.

"We want unconditional apology of chief minister Mamata Banerjee for the manner in which she had addressed us at the SSKM Hospital yesterday. She should not have said what she had," a spokesperson of the joint forum of junior doctors, Dr Arindam Dutta, said.

As the medical fraternity from across the country began to rally behind their Bengal colleagues, Union Health Minister Harsh Vardhan urged Banerjee not to make this sensitive matter a "prestige issue" but ensure an "amicable end" to the stir, which entered the fourth day Friday.

Governor Keshari Nath Tripathi said he called up Banerjee to discuss the issue but got no response from her.

"I have tried to contact the chief minister. I have called her up. Till this moment there is no response from her. If she calls me, we will discuss the matter," he told reporters after visiting injured junior doctor Paribaha Mukhopadhyay at the hospital. 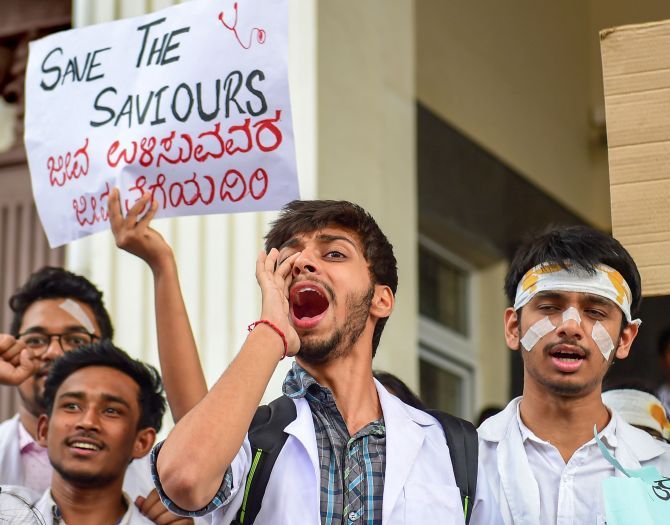 Listing the six conditions, the agitators said Banerjee will have to visit the injured doctors at the hospital and her office should release a statement condemning the attack on them.

"We also want immediate intervention of the chief minister. Documentary evidence of judicial inquiry against the inactivity of the police to provide protection to the doctors at the Nil Ratan Sircar Medical College and Hospital on Monday night should also be provided," Dutta said.

"We demand documentary evidence and details of action taken against those who had attacked us," Dutta said.

The agitators also demanded unconditional withdrawal of all "false cases and charges" which were imposed on junior doctors and medical students across West Bengal in the wake of strike.

They stressed on their demand for improvement of infrastructure in all health facilities as well as posting of armed police personnel there.

A senior state health department official said over 200 doctors, including heads of departments of medical colleges and hospitals in Kolkata, Burdwan, Darjeeling and North 24 Parganas districts, sent their resignation letters to the state director of medical education. 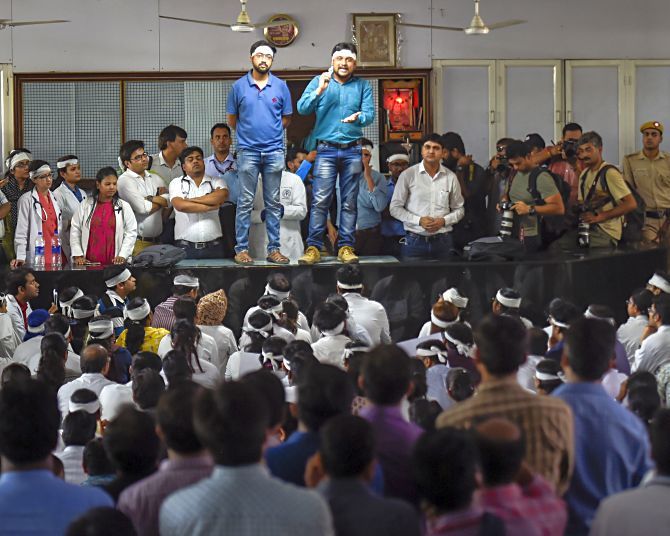 IMAGE: Members of Resident Doctors Association of AIIMS wearing bandages on their heads during a protest. Photograph: Kamal Singh/PTI Photo

"We express fullest solidarity to the current movement of NRS Medical College and Hospital and other government hospitals agitating to protest the brutal attack on them while on duty," Dr P Kundu, director of the Calcutta School of Tropical Medicine, said in the resignation letter.

"We strongly stand by the demands of security and protection for all healthcare personnel and we have tried our best to continue life saving services in the interest of our patients till now," Prof (Dr) Dipanjan Bandyopadhyay, Head of Medicine department at North Bengal Medical College and Hospital, wrote in the resignation letter which contained the signature of 34 other senior doctors.

"Under the present circumstances, it is not possible for us to continue our services indefinitely without minimum manpower resources. In the absence of any constructive
development to end this crisis, we are pained to offer our resignation and request you to relieve us of our responsibilities," the resignation letter read.

The principal and the medical superintendent of the NRS Medical College and Hospital submitted their resignations on Thursday night. 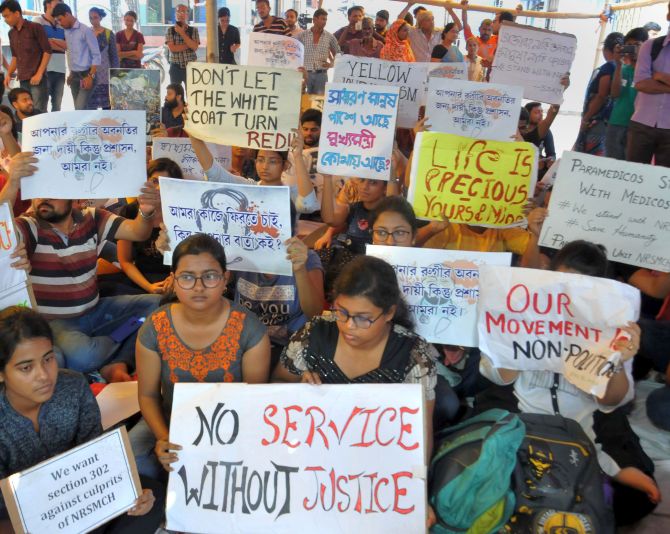 IMAGE:  Junior doctors hold placards during their strike in protest against an attack on an intern doctor, at Nil Ratan Sircar Medical College and Hospital in Kolkata. Photograph: PTI Photo

Two junior doctors of the NRS Medical College and Hospital were seriously injured in an attack by family members of a patient who died on Monday night, triggering the stir.

They later participated in a rally holding placards with a message "No more violence, enough is enough".

While visiting the SSKM Hospital on Thursday, Banerjee had contended that "outsiders" had entered medical colleges to create disturbances and the agitation was a conspiracy by the CPI(M) and the BJP.

Meanwhile, the Calcutta high court refused to pass any interim order on the strike. 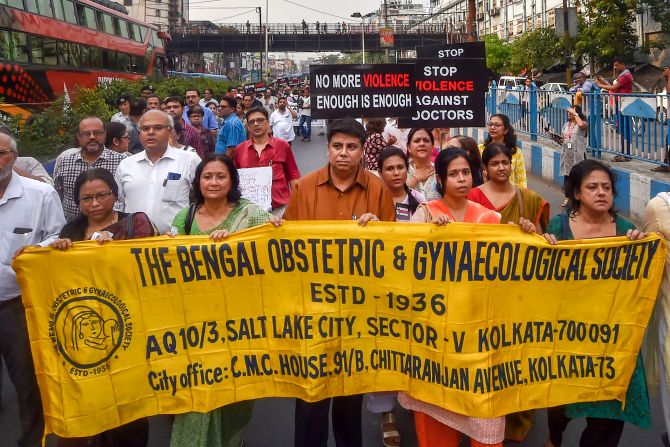 IMAGE: Members of Joint Doctors Forum walk in solidarity during their strike in protest against an attack on an intern doctor, at Nil Ratan Sircar Medical College and Hospital in Kolkata. Photograph: Ashok Bhaumik/PTI Photo

Many kin of TMC leaders also backed the doctors stir.

In Delhi, scores of doctors at some government and private hospitals held demonstrations by marching and raising slogans to express solidarity with their Kolkata colleagues.

Junior doctors in Odisha staged dharna with bandages on their foreheads, besides staying away from duty. 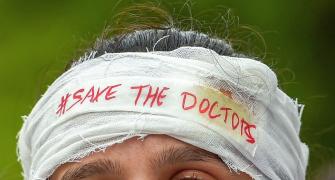 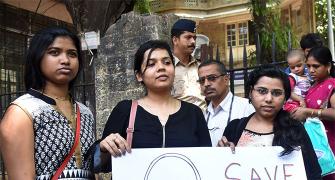 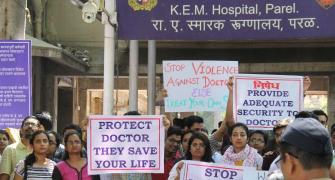 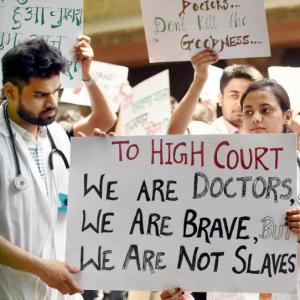 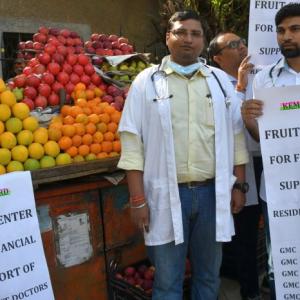