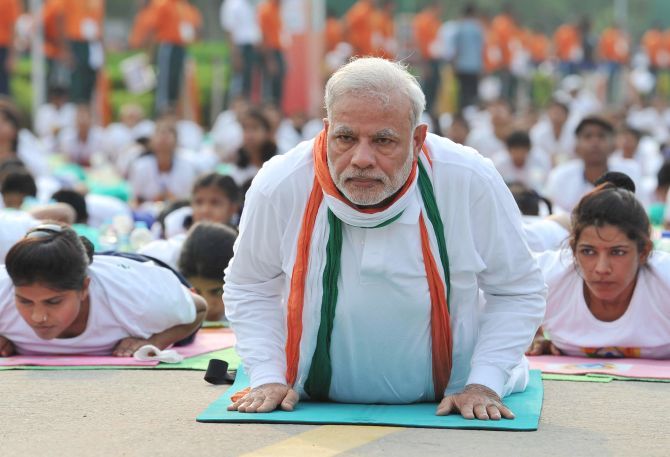 Prime Minister Narendra Modi on Sunday led the first International Yoga Day celebrations in the country, defining yoga as a means to train the human mind to begin a new era of peace and harmony.

The prime minister, who practised 'asanas' along with nearly 35,000 participants during a mega event at Rajpath, New Delhi, also thanked the United Nations and the countries which backed the resolution by India to mark June 21 as International Yoga Day. 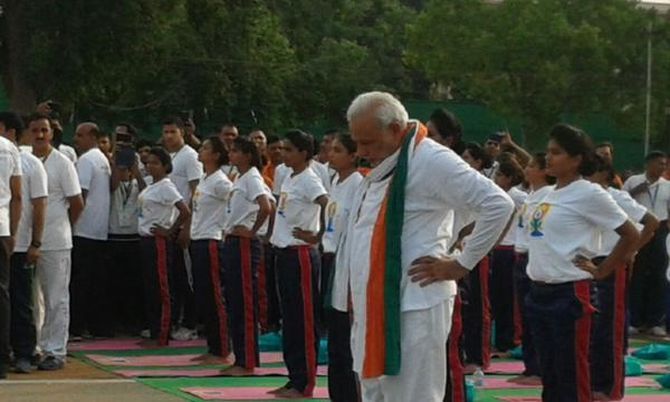 The prime minister, who was expected to only address the gathering, surprised everyone by participating in the yoga exercises along with thousands of people, including children.

Yoga guru Ramdev shared the dais with Modi along with heads of some other religious and yoga institutions. Modi later joined the participants on the ground as he practised the 'asanas' during the 30-minute programme. Kicking off the event, the prime minister said the programme is aimed at benefiting the people by making them both physically and mentally healthy. It seeks to make a tension-free world and spread the message of 'Sadbhavana' (harmony), the PM said, adding that yoga is "more than only physical fitness".

"For most of the people, yoga is just a physical exercise. This is the biggest mistake.... Had this been the case, children working in circuses could have been called 'yogis'. Hence yoga is not only about making the body flexible," he said, while addressing the participants. 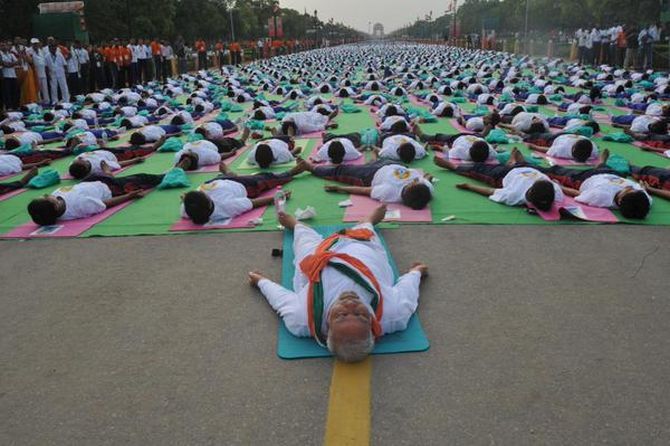 The prime minister expressed hope that the atmosphere built in favour of yoga in the country will continue in future as well. He also said that it is not important for him where this ancient technique originated and where all it has reached.

"We are not only celebrating a day but we are training the human mind to begin a new era of peace - Sadbhavana.... This is a programme for the benefit of mankind, a tension-free world and a programme to spread the message of Sadbhavana," Modi said.

He expressed joy over the large gathering at Rajpath noting, "Did anyone imagine this Rajpath will become a Yogpath?. Later, Modi interacted with the children who had converged for the event.

Minutes before the mega event commenced at Rajpath, the prime minister tweeted, "Greetings to people around the world on first International Day of Yoga! Let’s pledge to make yoga an integral part of our daily lives."

In another tweet, he said in some parts of the world, the first rays of the sun have already been welcomed by people practising yoga. This will continue across the world. "I will join the yoga day programme at Rajpath in a short while," Modi said. 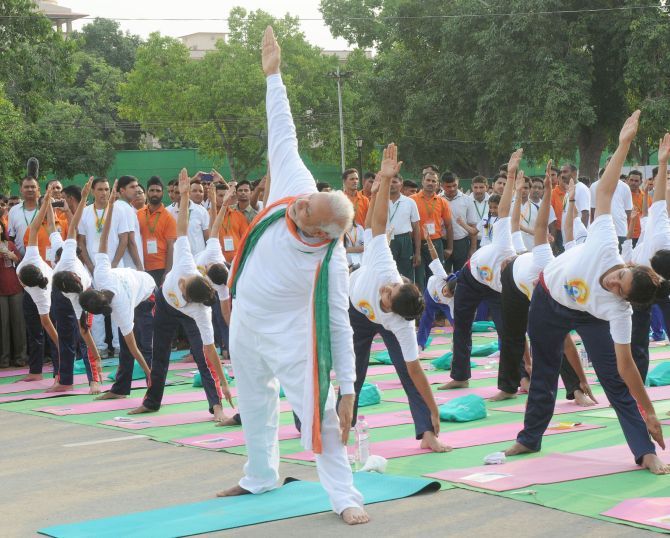 Modi does the stretches on International Yoga Day in Rajpath. Photograph: PIB

India led 191 countries to mark the day with nearly 35,000 people taking part in the yoga demonstration at Rajpath while a number of programmes were being held across the nation. The armed forces also joined the celebrations with the men in uniform practising yoga at Siachen, the world's highest battlefield, and on board warships.

External Affairs Minister Sushma Swaraj was in New York to participate in the Yoga Day celebrations at the United Nations. Indian Missions abroad were also organising special programmes for the day.

In his welcome address, Minister of AYUSH, Shripad Naik said that the world is embracing yoga in a big way.

The United Nations had in December last year declared June 21 as International Yoga Day, with 177 countries voting in favour. The proposal had been mooted by the prime minister during his first address to the UN General Assembly in September last year.