Airports across the country handled 325 departures and 283 arrivals with 41,673 passengers till 5 pm on Tuesday even as flight cancellations continued with passengers facing difficulties. 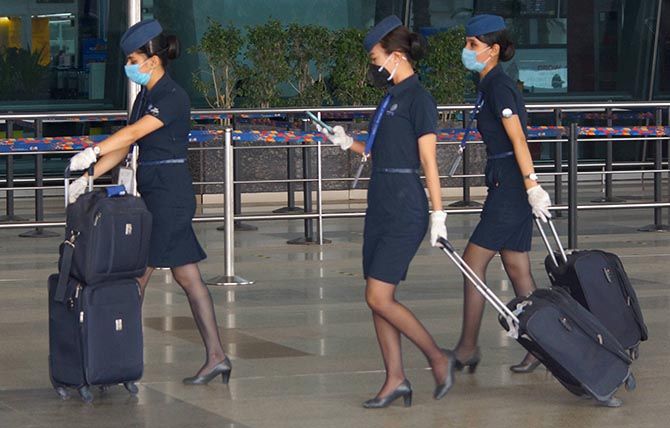 Moreover, domestic operations resumed in Andhra Pradesh on Tuesday, a day after the restart of air travel across India.

West Bengal was the only state where no domestic services took place.

As major airports like Mumbai, Chennai and Hyderabad have a severe cap on the number of fights they can handle, cancellations continued on Tuesday.

Just like Monday, a section of passengers reached their airports on Tuesday only to be informed that their flights have been cancelled. Many people vented their ire on social media.

"Smooth operations of domestic civil aviation operation. Our airports have handled 325 departures & 283 arrivals with 41,673 passengers till 5pm on 26 May 2020, the second day after recommencement of domestic flight," Civil Aviation Minister Hardeep Singh Puri said on Tuesday.

"Final report for the day will be prepared after details come in at midnight," he added. 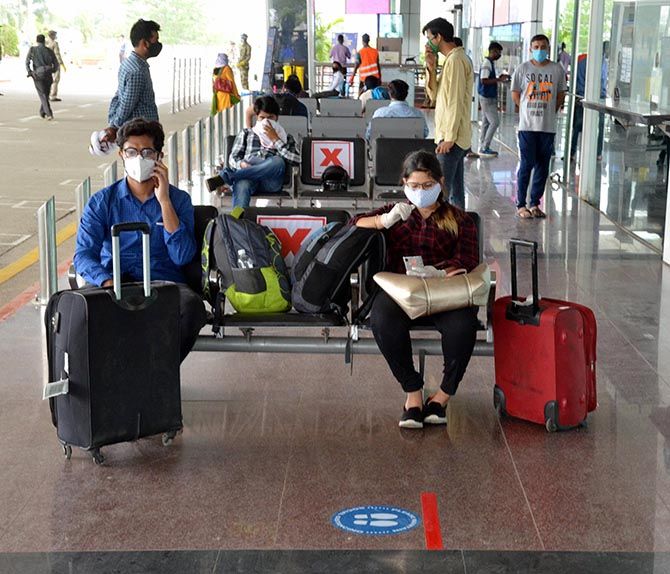 Chennai airport was scheduled to handle only 20 arrivals and departures each on Tuesday, said senior government officials, even though Puri on Sunday night said that it can handle up to 25
arrivals per day and has no limit on the number of departures.

Even in Andhra Pradesh, where domestic services resumed on Tuesday, Vijayawada and Vizag airports were scheduled to handle just eight flights each during the day, officials said.

On Sunday night, the central government had said these two airports can handle up to 20 per cent of the pre-lockdown flights from Tuesday onwards.

The Indira Gandhi International Airport in Delhi, which is India's largest, was scheduled to handle around 277 flights on Tuesday, the officials said, adding that around 25 flights were cancelled during the day.

On May 23, the government officials had said they expected Delhi airport to handle around 380 flights per day from May 25 onwards. 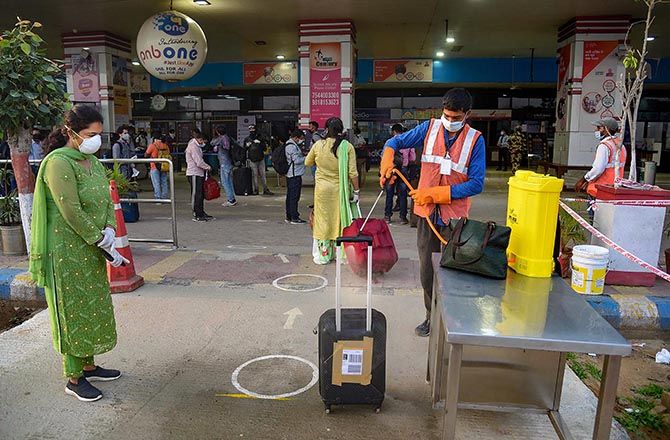 IMAGE: A worker sanitizes the luggage of a passenger who has arrived from Mumbai at Jai Prakash Narayan International Airport following the resumption of domestic flights, during the ongoing COVID-19 lockdown, in Patna. Photograph: PTI Photo

On Sunday night, the central government had clarified that Mumbai will handle a maximum of 50 flights per day from Monday.

Aarti Chaddha, a member of Aam Aadmi Party's social media team, had booked a seat on Tuesday's Mumbai-Chandigarh flight of IndiGo for her mother who had been stranded in Mumbai for the last two months due to the lockdown.

This flight was cancelled and when Chaddha asked IndiGo about it on Twitter, the airline responded the flight has been "impacted" due to the restrictions imposed by the Maharashtra government.

She said on Twitter on Tuesday, "Can we get the list of 25 flights listed to take off from Mumbai? Airlines are booking tickets, not sending cancellation messages, cancelling last minute, deducting the money."

West Bengal would be resuming domestic flights from Thursday.

However, its Kolkata and Bagdogra airports will handle only 20 flights each per day. 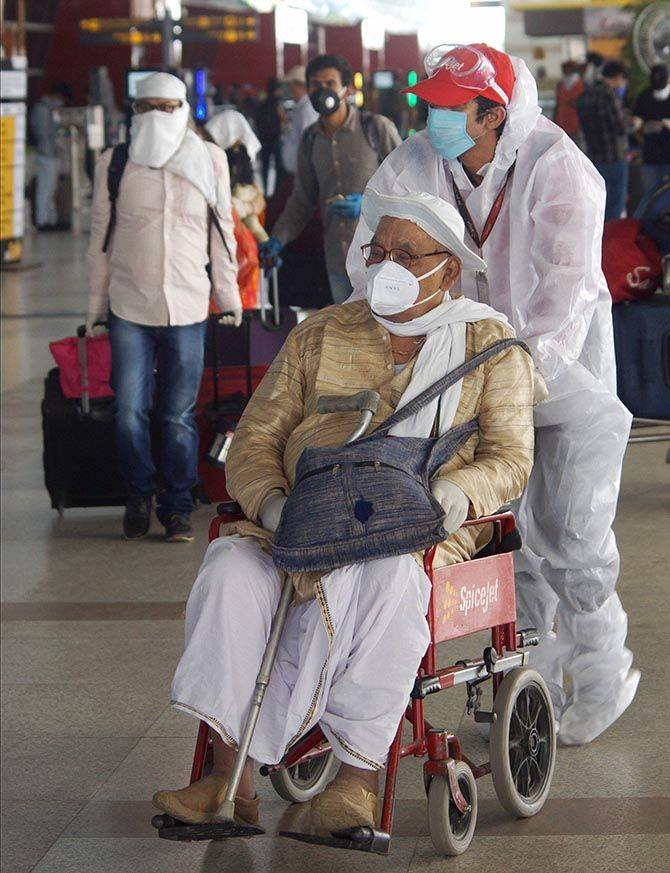 IMAGE: A staff member helps an elderly passenger who has arrived at T3 of IGI airport for domestic travel after the resumption of flight services, in New Delhi. Photograph: Kamal Kishore/PTI Photo

On Sunday night, the central government had announced that Andhra Pradesh and West Bengal will not handle any domestic flights on Monday and major airports like Mumbai, Chennai and Hyderabad will see reduced operations from Monday onwards.

The officials said the first flight on Tuesday to Vijayawada landed from Bengaluru at 6.55 am, carrying 79 passengers. The Spicejet flight returned to Bengaluru with 68 passengers, they added.

At the Vizag airport, the first flight landed from Bengaluru at 7 am.

"At Vijayawada, four flights are of IndiGo, two each are of SpiceJet and Air India," they added.

Visakhapatnam airport is scheduled to handle eight flights on Wednesday, the officials mentioned. 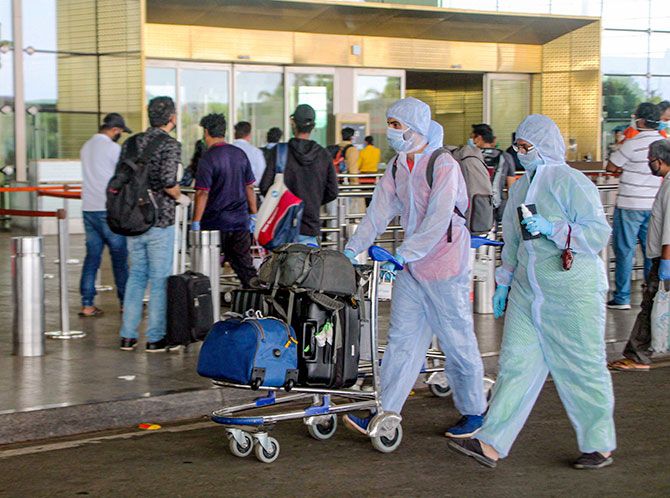 After a two-month suspension due to the coronavirus pandemic, domestic flights resumed in India on Monday with 428 flights carrying 30,550 passengers to their destinations. Around 630 flights were cancelled.

Thousands of passengers had reached airports early in the morning on Monday only to be told by the staff of airlines that some of their flights have been cancelled causing hardship to them.

The airlines, which were allowed to operate one-third of their pre-lockdown domestic services from May 25, had to further truncate their flight schedules on Sunday leading to cancellations.

All carriers except GoAir operated their flights on Monday and Tuesday.