The bright and hilarious side of animal life

The Comedy Wildlife Photography Awards is back and they have announced its finalists.

In addition to providing some light-hearted relief, the competition also aims to highlight the important message of wildlife conservation.

From shopping responsibly by avoiding plastics and palm oil to restricting water use at home, this year’s contest is aimed at making people think about the animals on the planet -- as well as laughing at them.

The winners will be announced on November 13. 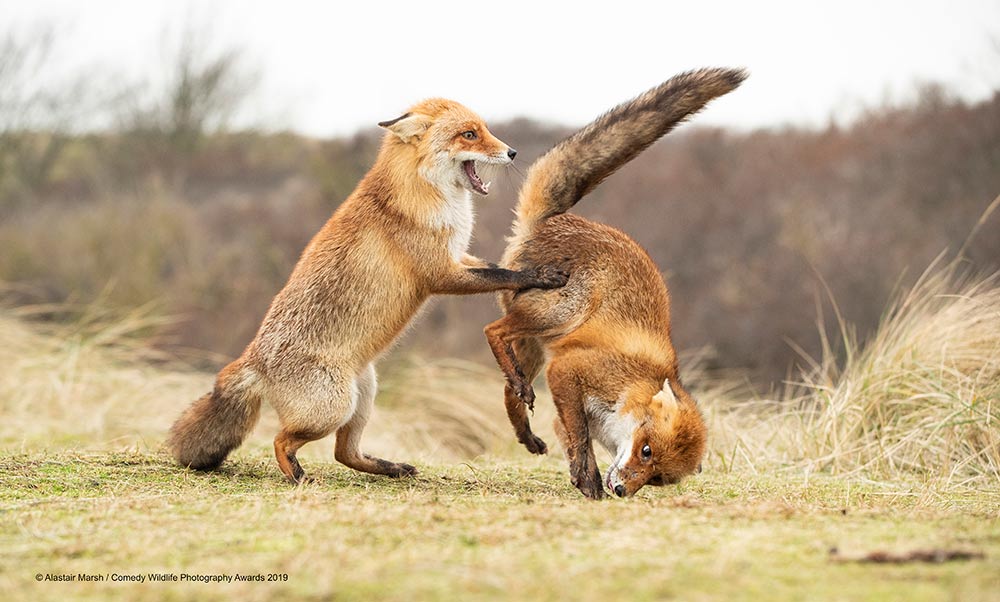 I spent a few days at a well known site near Amsterdam in Holland watching and photographing foxes. These two females were actually having a scrap with each other, clearly not happy with being close. People keeping saying to me that the series of photos make them look like they're doing the 'waltz' dance. This image always makes me smile given the pose! Photograph: Alastair Marsh/Comedy Wildlife Photo Awards 2019 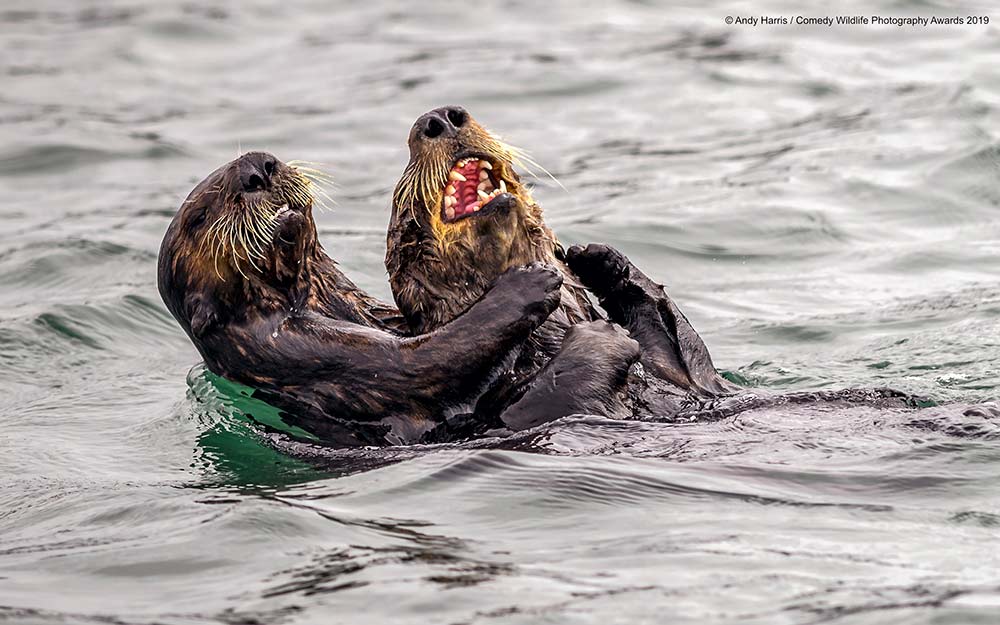 Amazing (and hilarious in this shot's case!) close up views of Sea Otters cavorting in Elkhorn Slough just off Monterey Bay, CA, when we were on holiday there. These hugely impressive Sea Otters were completely at ease and interacting with each other with characteristic Otter playfulness. Feeding on crabs together, these two still found time for a tickle fight to decide who got the juiciest crab for Dinner! An enchanting and amusing memory, from an unforgettable wildlife experience. Photograph: Andy Harris/Comedy Wildlife Photo Awards 2019 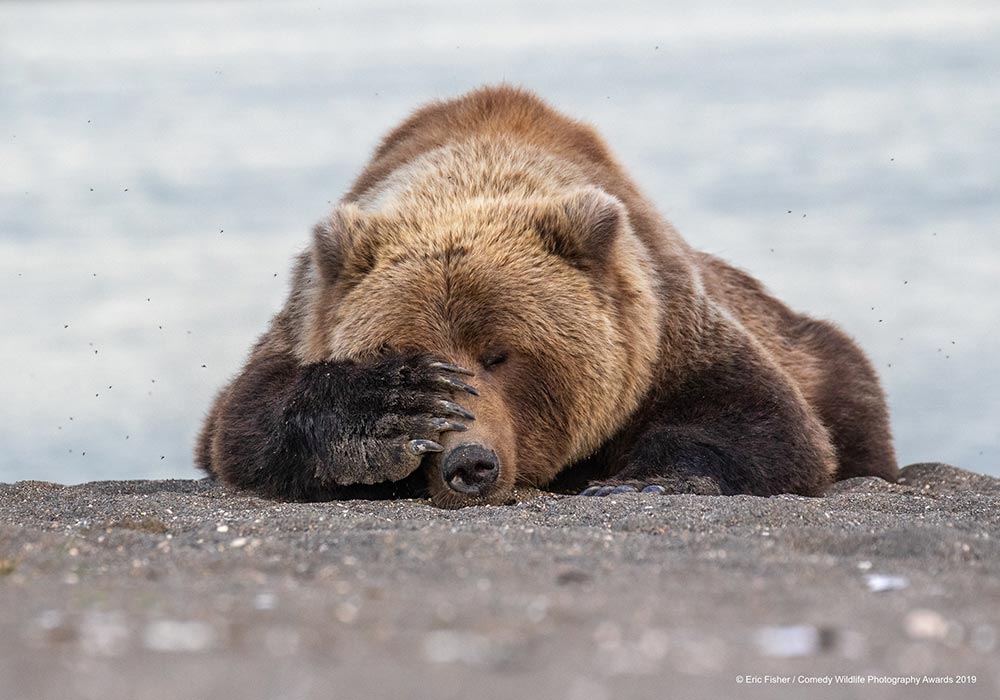 In Alaska this past summer, we were watching Brown Bears catching salmon out of a small river. This young juvenile had a very successful morning and walked over next to us and plopped down with a full stomach. Over the next 10 minutes he went through a hilarious range of emotions - from hiding his face from the light of day and completely passing out, to giving us a "diva" look and his overall face of satisfaction. This particular photo is exactly what I look like on a Monday morning. I started laughing the second I took this photo as it's so spot on. Photograph: Eric Fisher/Comedy Wildlife Photo Awards 2019 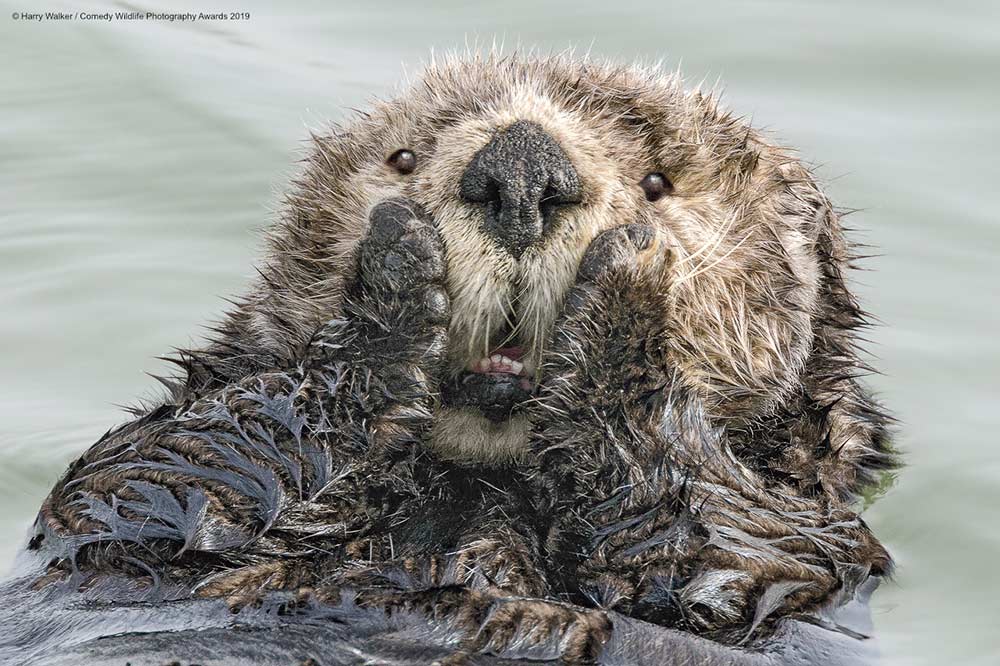 Unlike most other marine mammals, sea otters have no blubber and rely on exceptionally thick fur to keep warm. As the ability of the fur to repel water depends on utmost cleanliness, sea otters spend much of their time (while they are not sleeping or eating) grooming, offering photographers an unlimited number of anthropomorphic opportunities. Photograph: Harry Walker/Comedy Wildlife Photo Awards 2019

Caught in the act 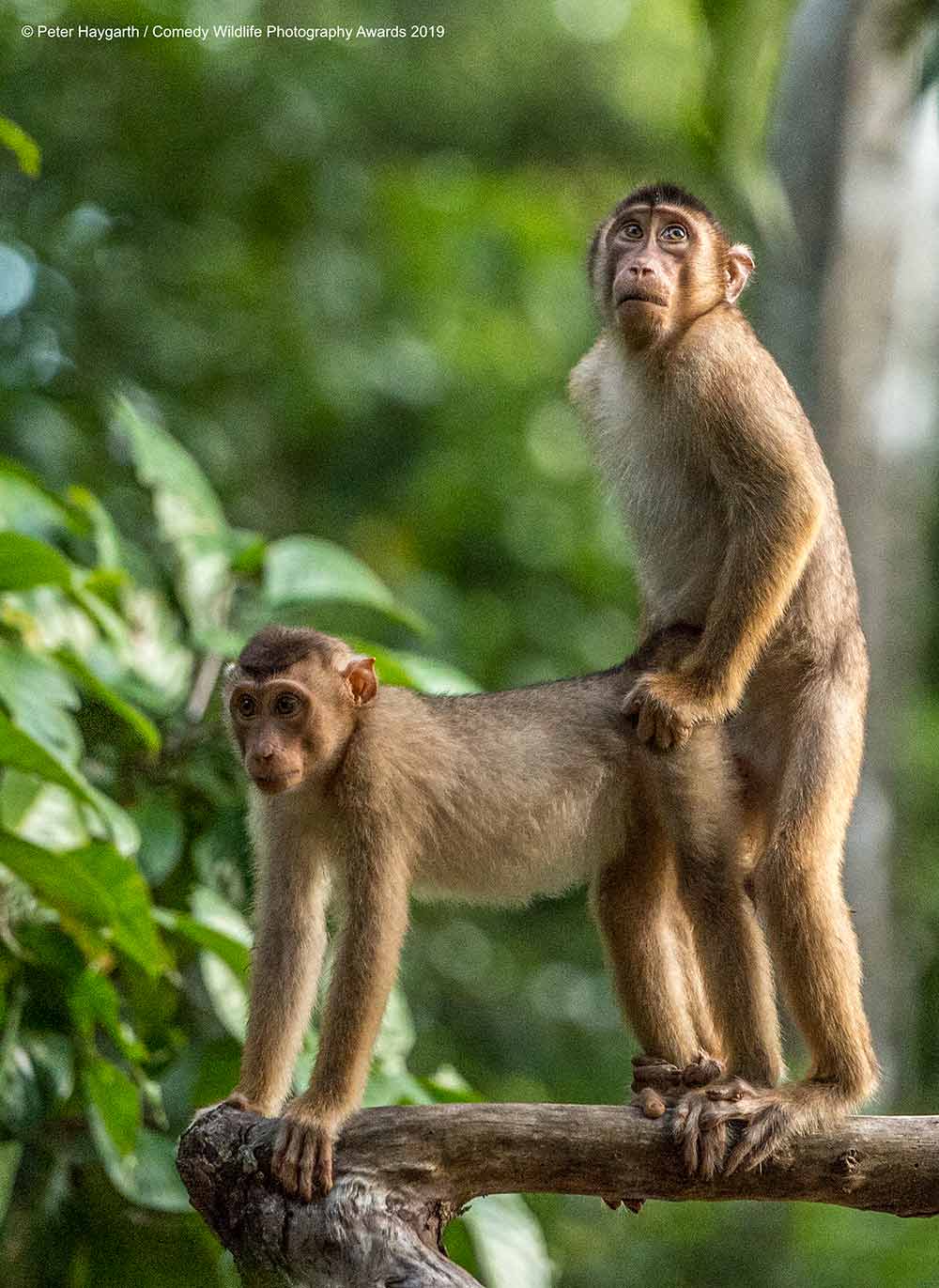 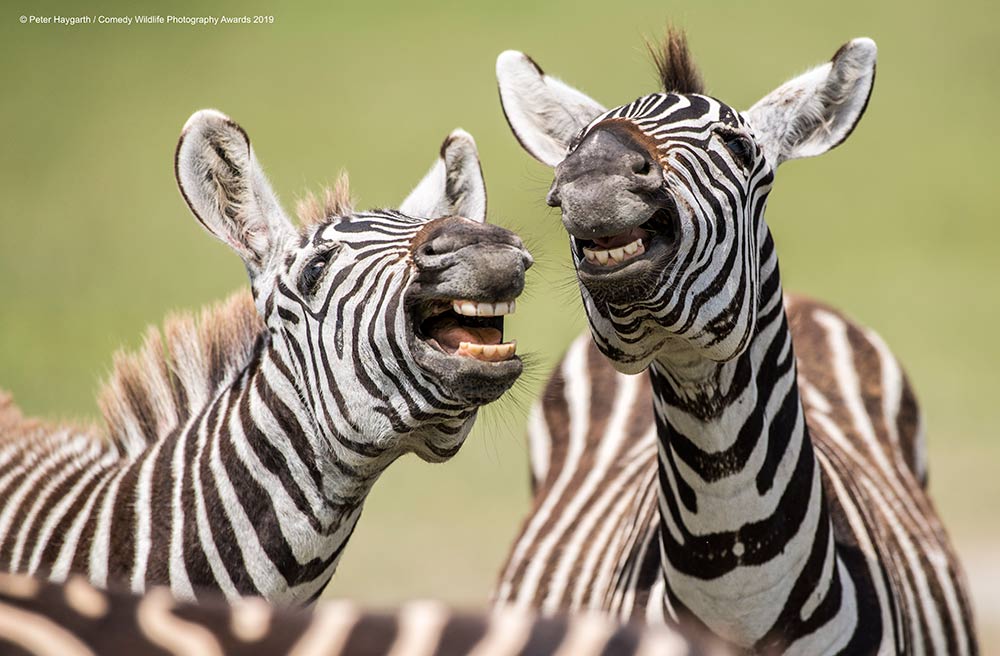 Two Zebras were playing together and appear to be laughing at the camera. Photograph: Peter Haygarth/Comedy Wildlife Photo Awards 2019 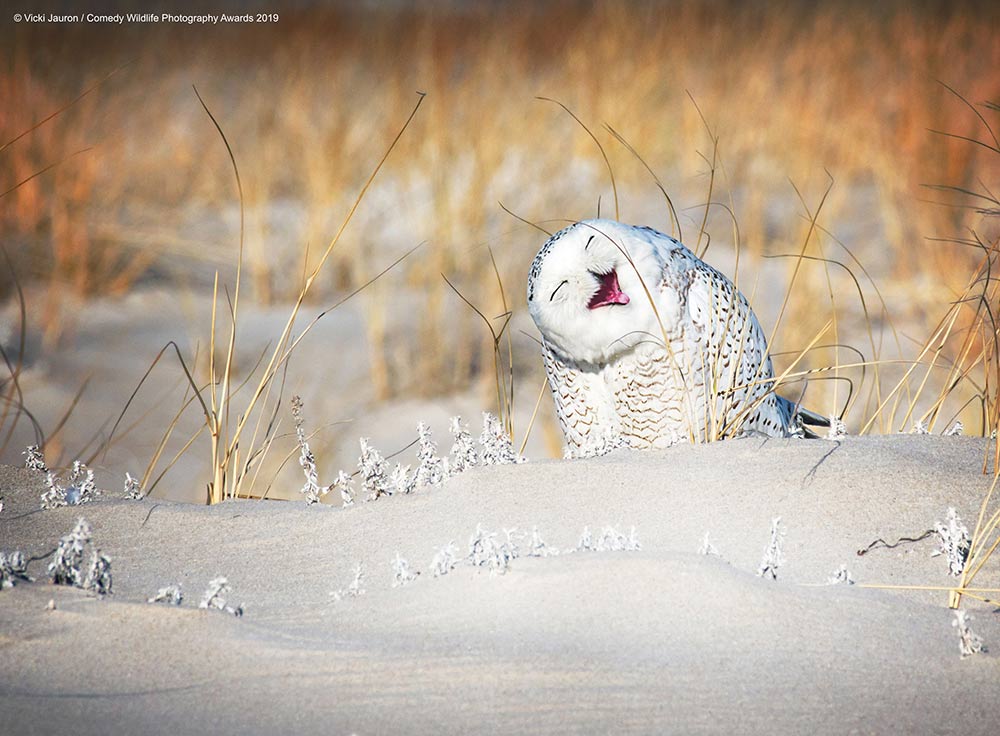 A Snowy Owl makes a cute pose and face as he perches in the sand at Jones Beach, Long Island. Photograph: Vicki Jauron/Comedy Wildlife Photo Awards 2019 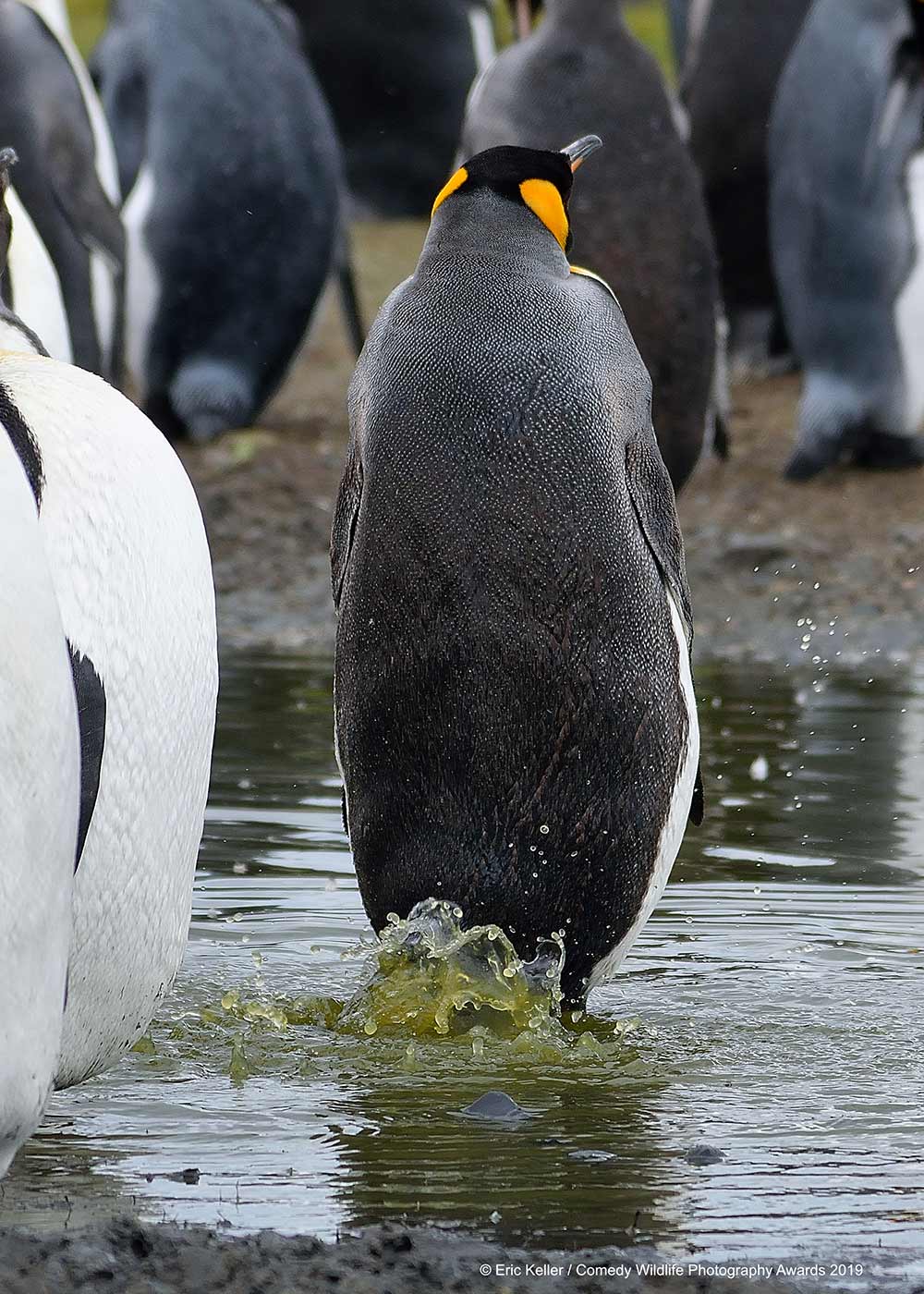 Either penguins are working on a new form of jet propulsion, or someone has a little gas. This penguin was standing in the water all by himself when the water started churning, then turned to splashing and then full eruption. When it was all done, the penguin looked around and carried on with the rest of his day. Photograph: Eric Keller/Comedy Wildlife Photo Awards 2019 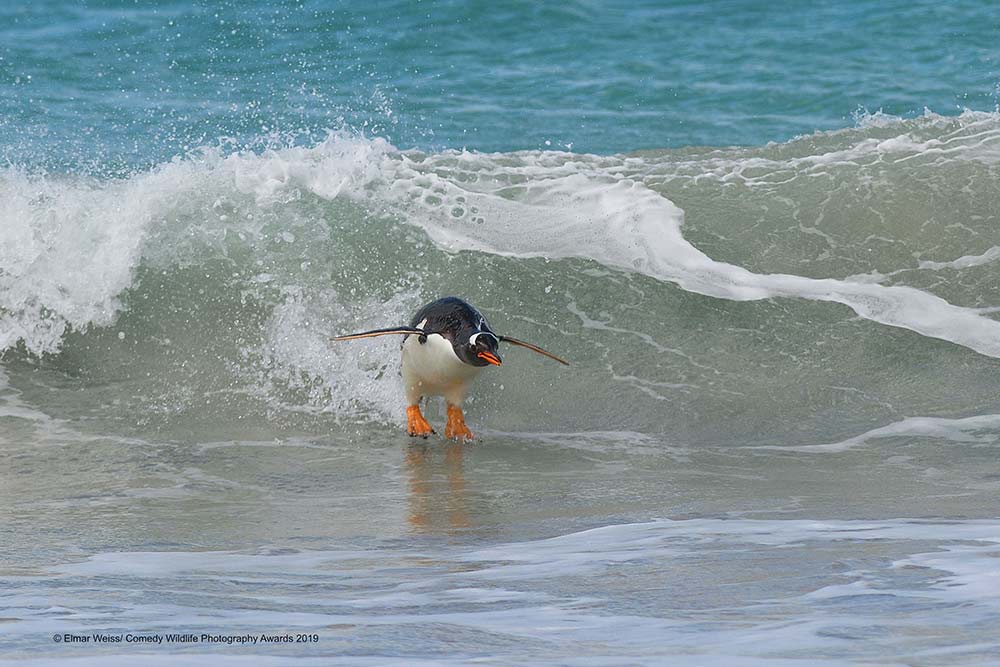 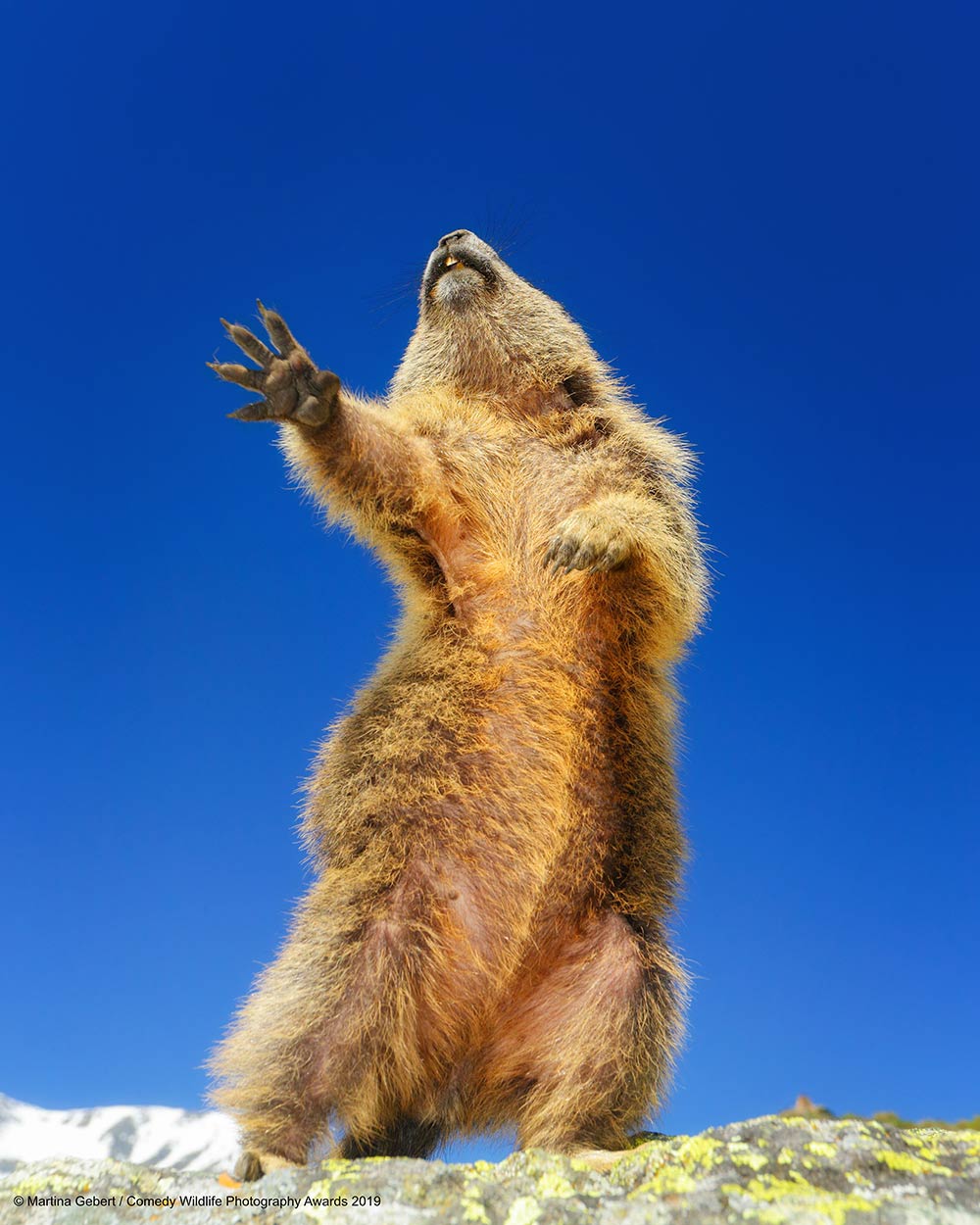 People think us Austrian marmots are shy inhabitants of the alps. Eating herbs, living in caves and hibernating during winter. We do this things but there is a secret life of marmots too ! If no one is watching us we like to PARTY and like ... dancing .... YEAH! Photograph: Martina Gebert/Comedy Wildlife Photo Awards 2019 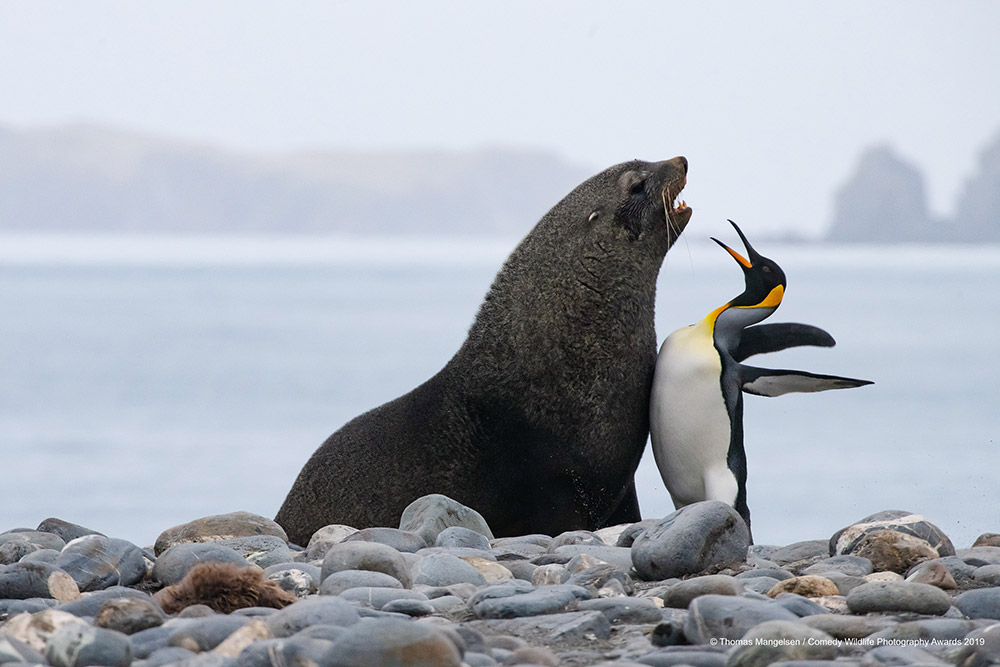 It was impossible to know what the disagreement was about, but this king penguin and Antarctic fur seal argued quite vocally for several minutes. The amazing thing is that the fur seal didn't use its considerable size advantage to put a quick end to the fight. Photograph: Thomas Mangelsen/Comedy Wildlife Photo Awards 2019 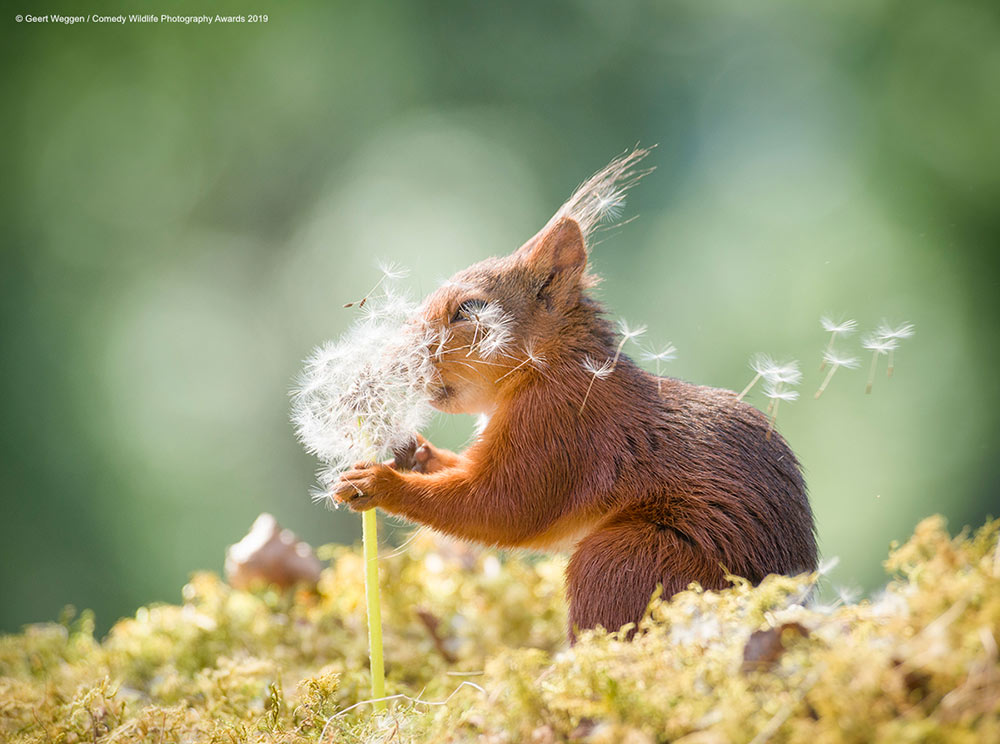 What are you looking for 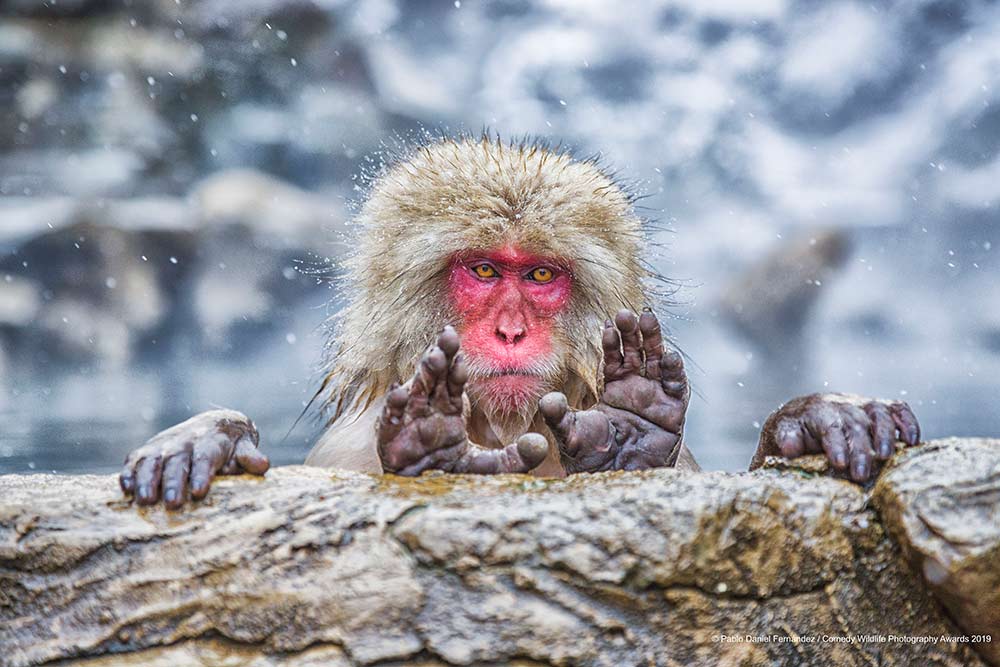 What I am showing in this portfolio is the reaction because of my presence. I found the can react as we do in the same situation. Trying to compare them to us, and finding no differences. Photograph: Pablo Daniel Fernandez/Comedy Wildlife Photo Awards 2019

To be or not to be 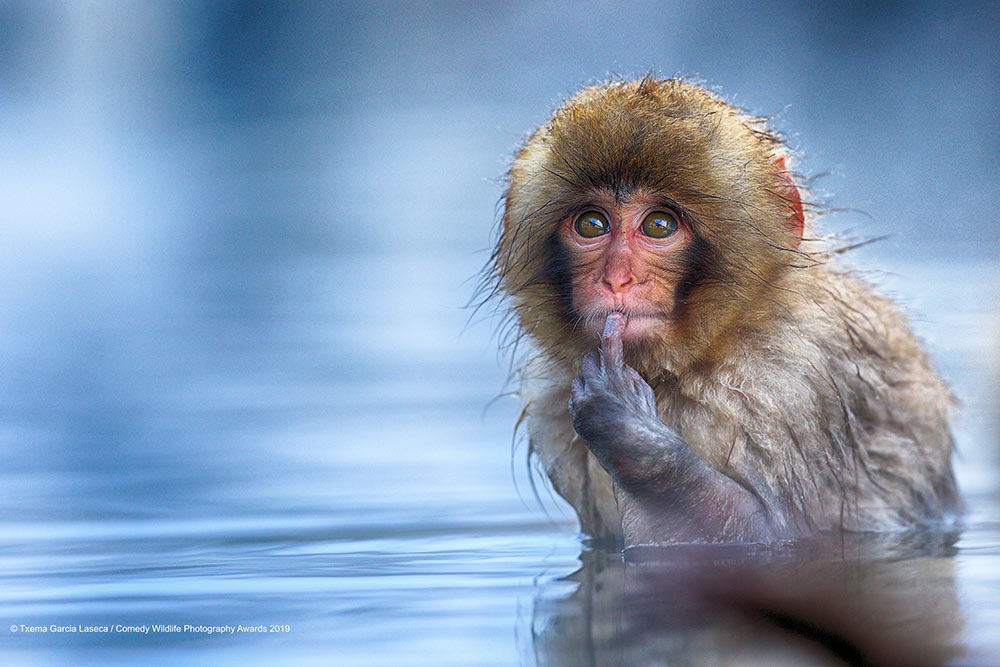 This snow monkey was looking at me when I took this picture and I think that he thought: "what an ugly guy!". He was taking a bath in the hot thermal water while the temperature outside was -15 degrees. Photograph: Txema Garcia Laseca/Comedy Wildlife Photo Awards 2019 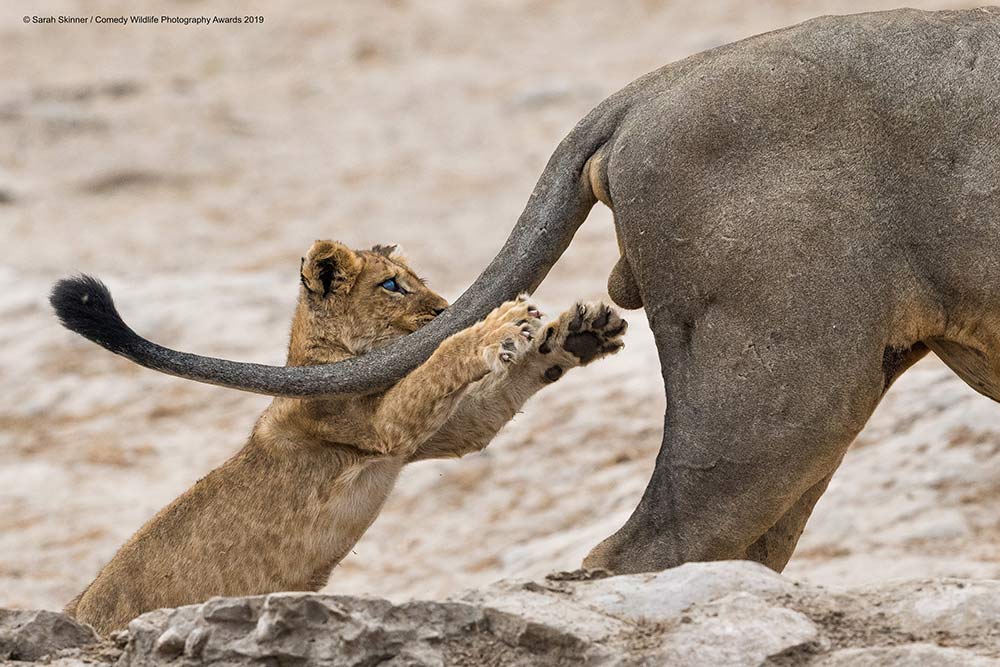 I had been watching the younger members of the Savuti Marsh pride in Botswana frolic around with play for a while at one of the waterholes. As the heat started to rise, one of the two dominant adult males of the pride decided to move from his position to seek shade. As the male stood and started walking off one of the young cubs, who is blind in one eye ran toward the male, leaping up toward him. Rather than leaping onto his back as we expected the cubs focus instead appeared to directed toward be the adult male's nether regions, with claws fully protracted! Who knows if it was intentional or not, or perhaps a slightly misguided aim. Had the cub been successful in his target there would have been a non to pleased male lion and we suspect a scolded lion cub.  Fortunately for the cub and the male he narrowly missed his 'crown jewels' and the male walked on, with all body parts unscathed! Photograph: Sarah Skinner/Comedy Wildlife Photo Awards 2019 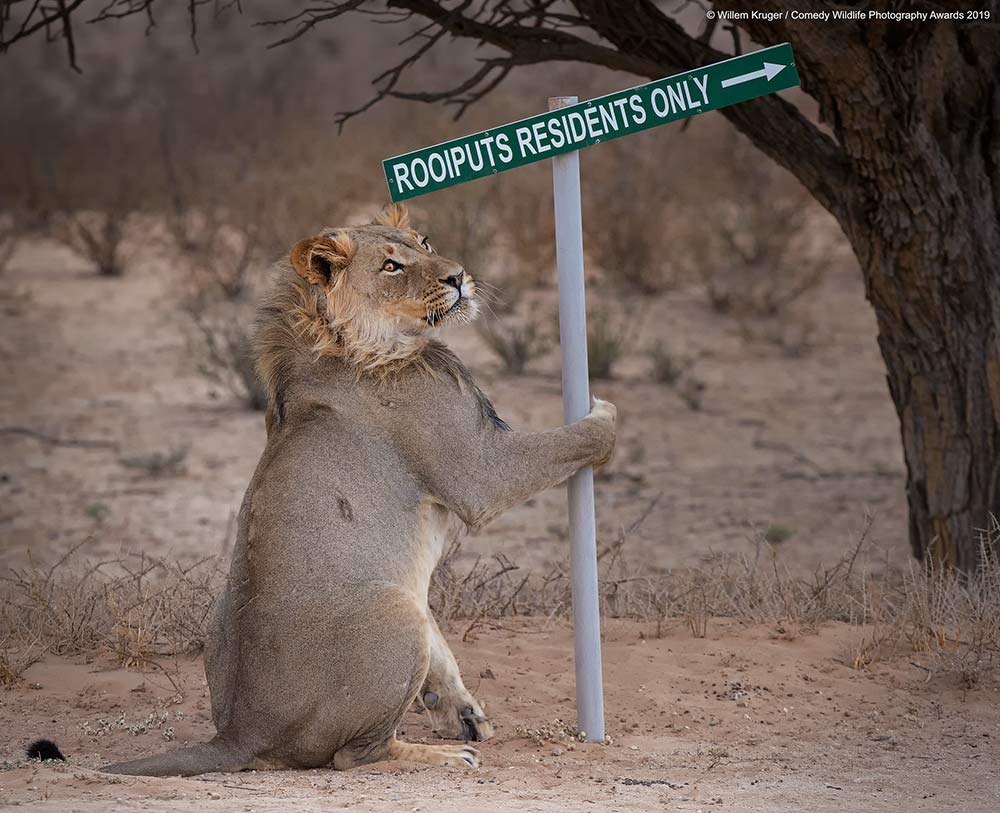 Image portrayed a young male lion hugging the signpost indicated the direction to the camping site in the Kgalagadi Transfrontier Park and it seems like he is thinking of a possible take away for the evening. Photograph: Willem Kruger/Comedy Wildlife Photo Awards 2019 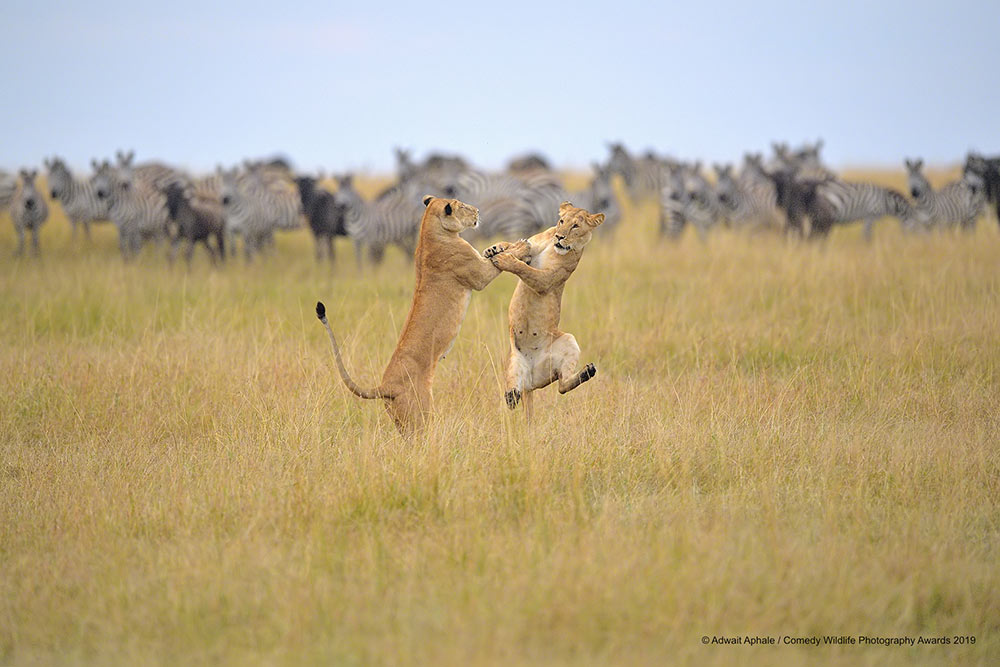 Mrs Lion clapping together and at point one actually hold hand of another in mid air  as if she was saying hang on dear hold me. Photograph: Adwait Aphale/Comedy Wildlife Photo Awards 2019 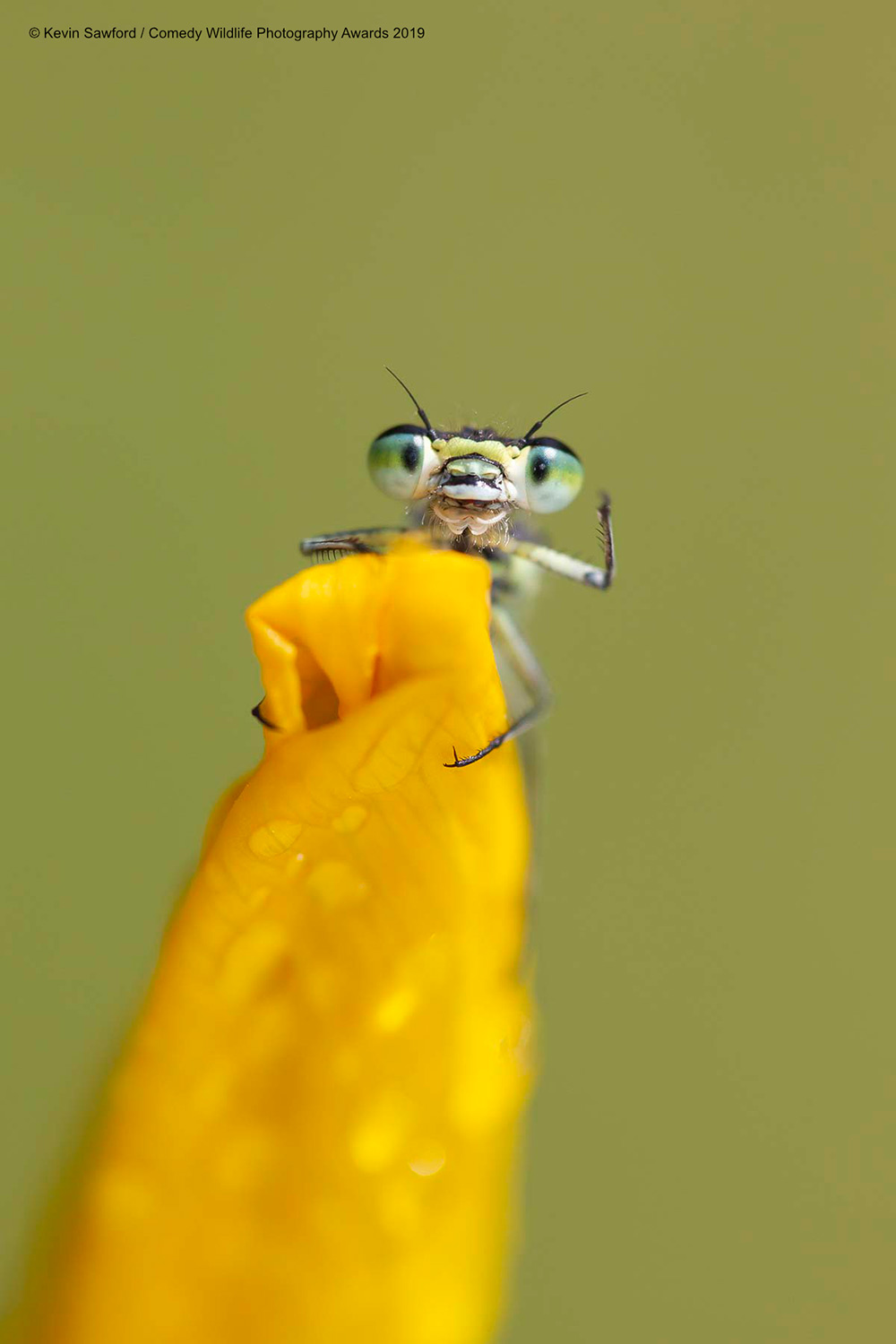 Early mornings are a great time to find damselflies warming up on summer days. I found this individual on the yellow iris flower, as it warmed up it would stretch it's legs giving me the opportunity to capture this image of it seemingly waving at me. Photograph: Kevin Sawford/Comedy Wildlife Photo Awards 2019 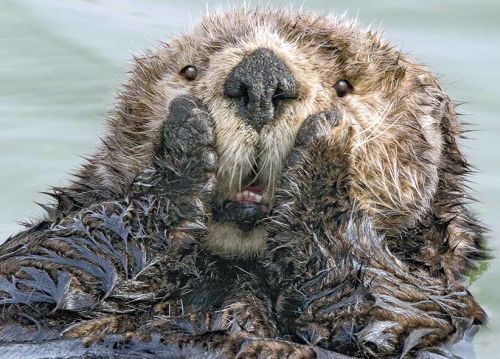