40,000 security personnel guard every nook and corner of New Delhi as US President Barack Obama arrives. 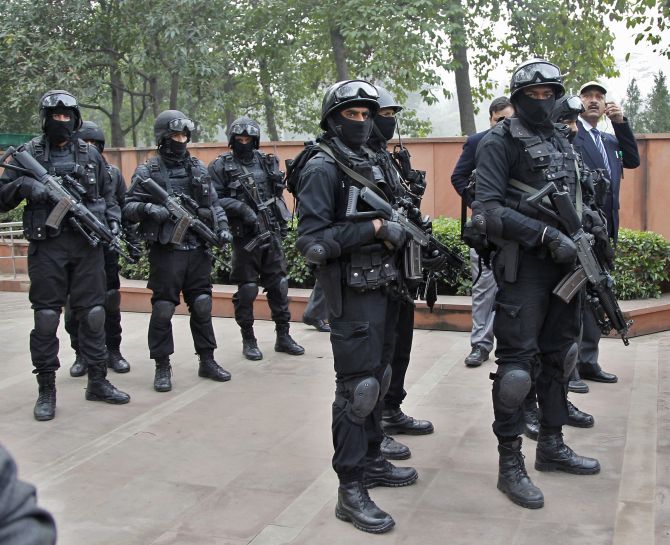 Members of the National Security Guard stand guard outside the Mahatma Gandhi memorial ahead of US President Barack Obama’s visit. Photograph: Reuters

A multi-layered security blanket was thrown around New Delhi as United States President Barack Obama arrived on Sunday on a three-day visit during which he will grace the Republic Day parade and hold extensive talks with Prime Minister Narendra Modi.

Central Delhi turned into a virtual fortress with nearly 40,000 personnel drawn from Delhi police and paramilitary forces guarding every nook and corner and more than 15,000 CCTV cameras relaying every movement live to a central control room where it would be monitored by a joint team of Delhi police, US Secret Services and sleuths of central security agencies. An Indian security personnel with a sniffer dog, patrols near India Gate ahead of the Republic Day parade in New Delhi. Photograph: Anindito Mukherjee/Reuters

Traffic restrictions have been put in place in the national capital for movement of Obama's cavalcade. Both carriageways of Sardar Patel Marg, which is next to ITC Maurya Hotel where Obama will be staying have been completely shut down for normal traffic. Snipers of Delhi police and National Security Guards have been deployed at all nearby high-rise buildings.

The green ridge opposite to the hotel has been thoroughly checked and police personnel have been deployed in the jungles along the ridge till the US president leaves. 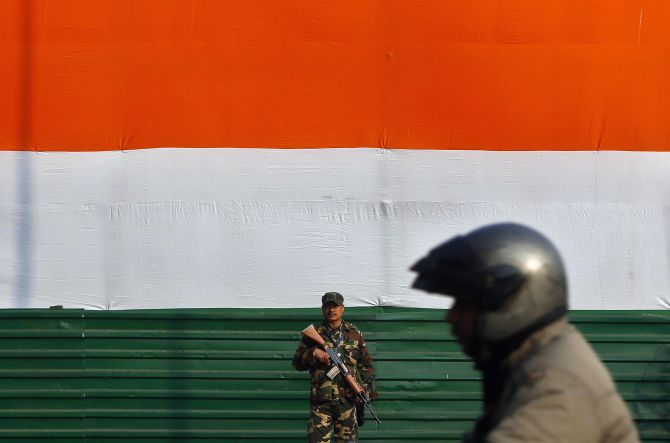 Security agencies have also sealed 71 buildings in close proximity of Rajpath where the Republic Day parade will be held on Monday. Security personnel have been deployed on rooftops.

Even bonafide citizens of Lutyens' zone, including MPs and officers of the armed forces, have been either issued special passes or have to establish their identities to enter the zone.

The three-km stretch of Rajpath, the main venue of the Republic Day parade, will be secured with a seven-layer security and will have over 160 CCTV cameras -- with one camera installed at every 18 metres.

Snipers and spotters will be deployed on all nearby high-rises which overlook Rajpath where the 66th Republic Day celebrations will be held. The Director General of Civil Aviation has issued a 'NOTAM' (Notice to Air Men) for diverting all flights flying over Delhi at the time of the parade. Earlier, planes flying above 32,000 feet did not fall in the category of no-fly zone, but now the height has been raised to 35,000 feet, the sources said.

However, no plane will be flying within a radius of 400 km of Rajpath as against 300 km on earlier occasions, they said. This means airports adjoining Delhi like Jaipur, Agra and as far as Lucknow or Amritsar may not operate flights when the function will be on in the national capital.

Sticking to the past practice, no plane will land or take off at the Indira Gandhi International Airport here during the time of the parade. 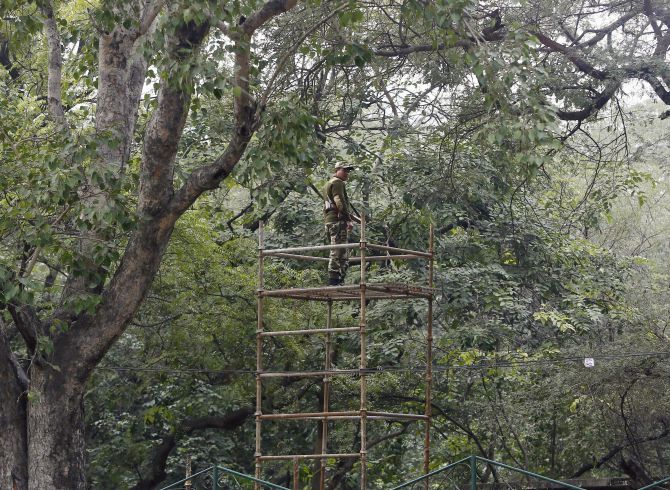 A  security personnel guards on a stand installed near ITC Maurya, the hotel where Obama is staying during his visit. Photograph: Anindito Mukherjee/Reuters

Police have also installed around 80 face-recognition cameras around the venue of Republic Day celebrations and at the city's entry points to identify any anti-national or criminal elements.

No vehicle will be allowed to ply on Rajpath after 6 pm till the closure of function on January 26. No traffic will be allowed on Tilak Marg, B S Z Marg, Netaji Subhash Marg up to Red Fort after 4:00 AM on the Republic Day. 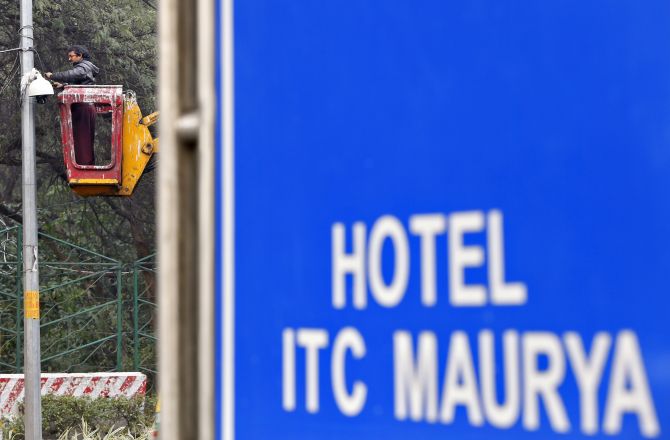 A worker checks a security camera installed outside the hotel. Photograph: Anindito Mukherjee/Reuters

Spectators have to pass through a stringent multi-layered security check to be able to watch the parade and they will not be allowed to carry any electronic gadget to the venue.

The 80,000-strong Delhi police force assisted by another 20,000 drawn from para-military forces and state armed police will be on vigil to prevent any untoward incident.

For the first time, Airborne Warning and Control System may be deployed in New Delhi on Republic Day for maintaining vigil from the skies during the parade. 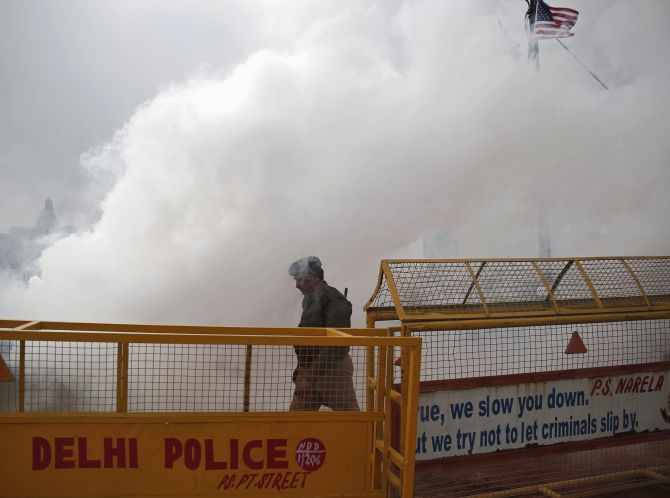 A policeman stands next to barricades blocking the road amid smoke caused by fumigation being done by municipal workers at the venue for the Republic Day parade. Photograph: Ahmad Masood/Reuters

The AWACS will monitor air space above and around Rajpath where the parade will be witnessed by Obama along with President Pranab Mukherjee, Prime Minister Narendra Modi and a host of other dignitaries.

Specialised canine units of Indian paramilitary forces will be in service along with team of seven Belgian 'Malinois' dogs of the US Navy Seals which are accompanying the security personnel of the US.

Known as 'canine officers', their breed shot to limelight following Operation Neptune Spear where they sniffed out and helped in the arrest of most wanted terrorist Osama Bin Laden from his safe house in Abbottabad in Pakistan. These canines have already landed here and deployed to secure ITC Maurya along with a dozen canines of the Indo Tibetan Border Police.