Hugs and handshakes from Modi as Netanyahu begins India visit

Israeli Prime Minister Benjamin Netanyahu is on a six-day visit to India during which the two nations hope to deepen ties in trade and defence.

Netanyahu arrived on Sunday and his engagements began immediately.

Here’s a look at what the Israeli PM did on day 1 of his visit. 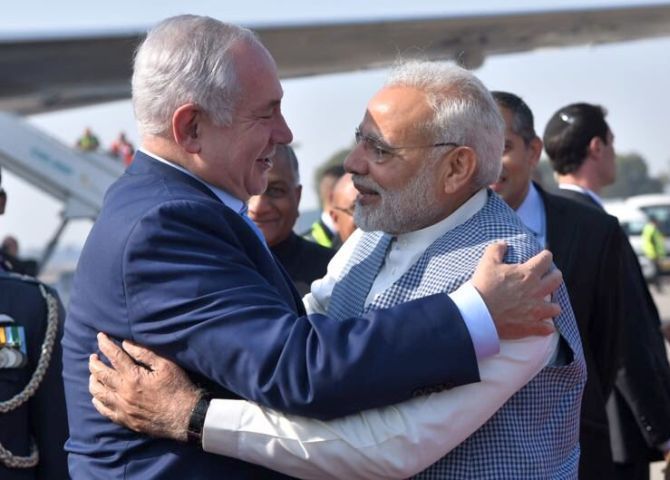 IMAGE: Prime Minister Narendra Modi put protocol aside and received his Israeli counterpart Benjamin Netanyahu at the airport in New Delhi. On Twitter, the PM wrote, ""Welcome to India, my friend PM @netanyahu! Your visit to India is historic and special. It will further cement the close friendship between our nations." Photograph: Adnan Abidi/Reuters

Israeli Prime Minister Benjamin Netanyahu arrived on Sunday on a “historic” six-day visit during which he will hold extensive talks with his Indian counterpart Narendra Modi, who received him at the airport, setting aside protocol.

Modi welcomed Netanyahu with a hug upon his arrival. 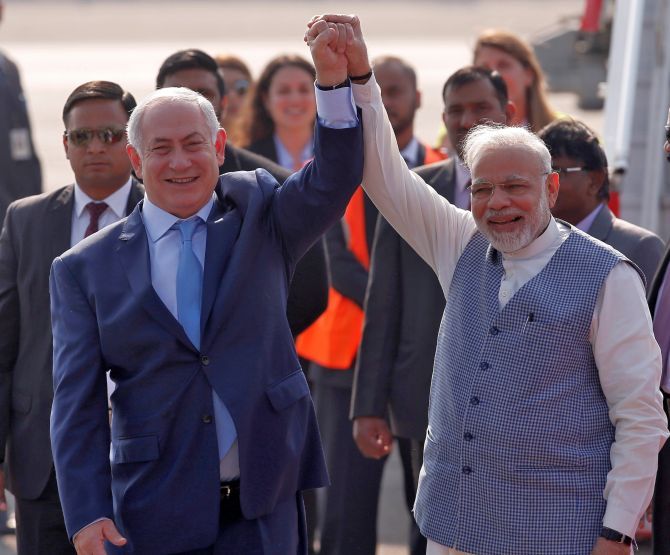 IMAGE: Netanyahu's visit -- the first by an Israeli premier since Ariel Sharon in 2003 -- is seen as an effort to build on the decision taken last July to elevate ties to a "strategic partnership". Photograph: Adnan Abidi/Reuters

“Welcome to India, my friend PM @netanyahu! Your visit to India is historic and special. It will further cement the close friendship between our nations,” Modi tweeted in English and Hebrew.

Netanyahu, who arrived with his wife Sara, and a high-level business delegation, tweeted, “We have landed in India. Thank you to my good friend Narendra Modi for the warm welcome!”

Ahead of his departure from Israel, Netanyahu said, “We are strengthening ties between Israel and this important global power (India).”

“This serves our security, economic, trade and tourism interests, as well as many other areas. This is a great blessing for the state of Israel,” he said. 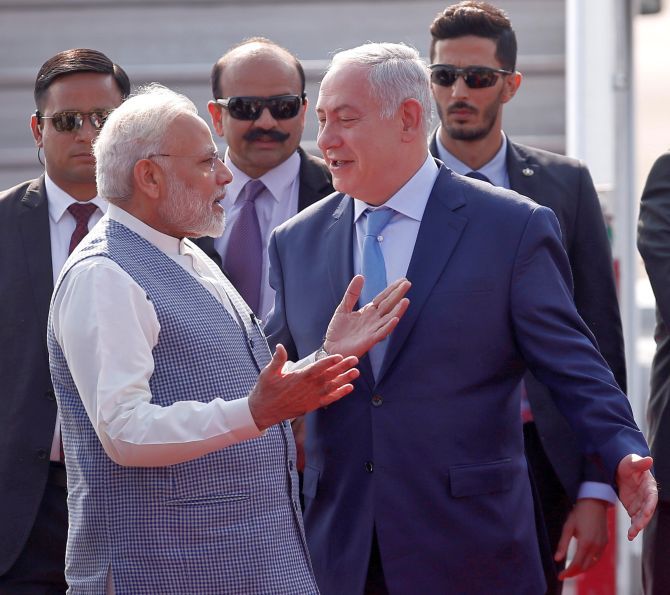 IMAGE: The two leaders share a close rapport, which was very evident during Modi's visit to Israel back in July, last year. Photograph: Press Information Bureau

According to Israeli officials, Netanyahu was pleasantly surprised by Modi welcoming him at the airport.

“I very much appreciate the gesture,” Netanyahu was quoted as saying by officials.

Modi and Netanyahu are known to share a warm personal rapport.

During Modi’s visit to Israel last year, Netanyahu had received the Indian prime minister at the airport.

Netanyahu’s visit to India is only the second by an Israeli prime minister and comes after a gap of 15 years. Former prime minister Ariel Sharon had visited India in 2003. IMAGE: The Israeli PM, along with his wife Sara, and Mod then made their way to Teen Murti Memorial to mark the formal renaming of Teen Murti Chowk as the Teen Murti Haifa Chowk, after the Israeli city of Haifa. Photograph: Press Information Bureau

They also laid a wreath and signed the visitor’s book at the memorial.

The three bronze statues at Teen Murti represent the Hyderabad, Jodhpur and Mysore Lancers who were part of the 15 Imperial Service Cavalry Brigade. The brigade carried out the victorious assault on the fortified city of Haifa on September 23, 1918, during World War I.

The renaming gesture underscores the special link and the common history between Israel and India, Netanyahu said after the event, according to Israeli officials. 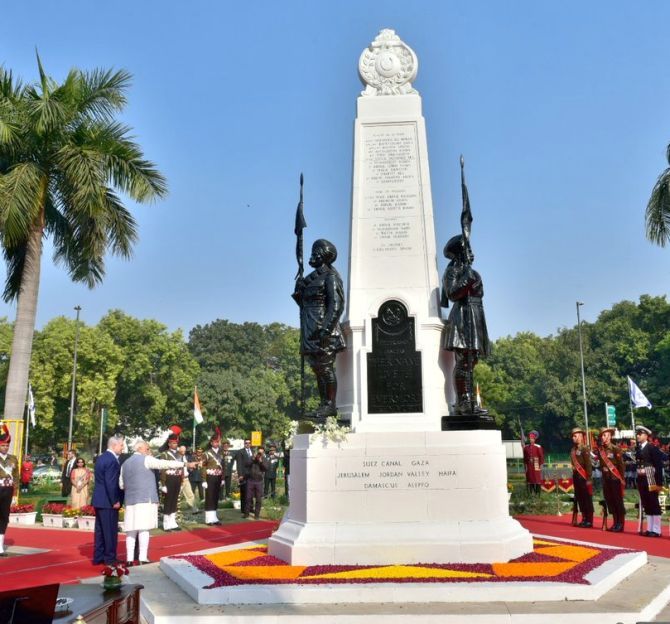 IMAGE: The three bronze statues at Teen Murti represent the Hyderabad, Jodhpur and Mysore Lancers who were part of the 15 Imperial Service Cavalry Brigade. The brigade carried out the victorious assault on the fortified city of Haifa on September 23, 1918, during World War I. Photograph: Press Information Bureau

During the meeting, Netanyahu told Swaraj that he was overwhelmed by the warmth he received upon his arrival here.

He also said that his visit can catapult bilateral ties to the next level. Later, Modi also hosted a private dinner for Netanyahu and his wife.

During Netanyahu’s visit, which comes days after India voted against Israel at the United Nations on the Jerusalem issue, several MoUs, including in the field of defence, oil and gas, renewable energy, amended protocol for airports, cyber security, and co-production of films and documentaries are expected to be signed between the two sides.

India had last month joined 127 other countries to vote in the United Nations General Assembly in favour of a resolution opposing the recent decision of US President Donald Trump to recognise Jerusalem as Israel’s capital. 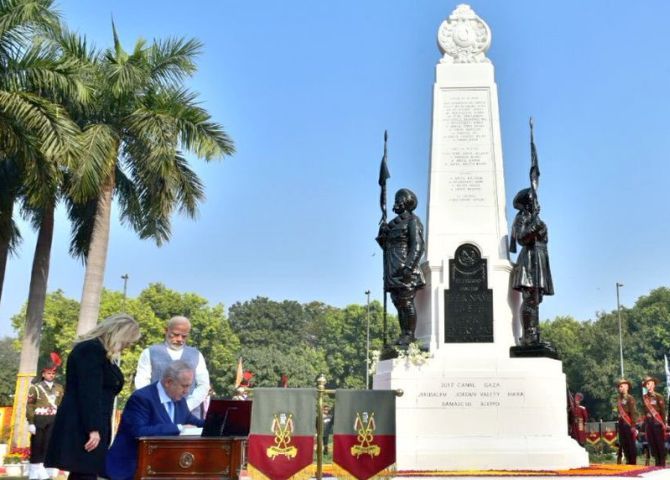 IMAGE: Netanyahu signs the visitor's book at the memorial, followed by PM Modi. Modi's inscription in the visitor's book reads: One of these pages was written 100 years ago, in the sacrifice of Indian soldiers at Haifa. The sacrifice commemorated at Teen Murti observes its centenary. Naming spot as Teen Murti - Haifa Chowk, marks this historic occasion. In presence of the Prime Minister of Israel, we pay homage to the brave soldiers. Salute to the great Indian traditions of selfless sacrifice and penance. Photograph: @MEAIndia/Twitter

During his stay, Netanyahu will also visit Gujarat and Mumbai.

On January 15, Netanyahu will meet the Indo-Israeli CEO forum here and address a separate business event. He will deliver a speech at the Raisina Dialogue on January 16. IMAGE: Netanyahu took to Twitter, writing, "Thank you to my good friend, Indian Prime Minister @narendramodi , who surprised me with a personal welcome at the airport upon my arrival in India. Together we will bring the relations between our countries to new heights." Photograph: Press Information Bureau/PTI Photo

The Israeli prime minister will have a number of engagements in Mumbai on January 18.

The Israeli embassy had said that Netanyahu will meet with Jewish community leaders and select members of the Indian business community in Mumbai.

It had said he will reach out to Bollywood in an exclusive “Shalom Bollywood” event.

In Mumbai, he will also attend a ceremony at the Chabad House, which will be attended by Moshe Holtzberg.

Fondly known as Moshe, the 11-year-old’s parents were killed in the Chabad House during the 26/11 terror strike, which had come under attack. 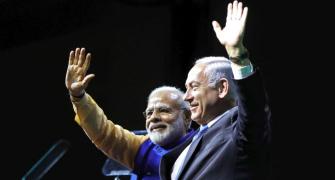 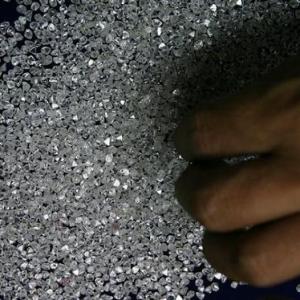 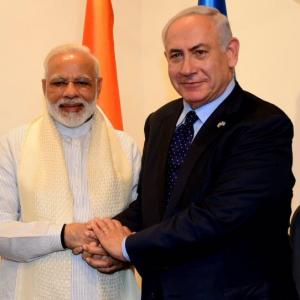