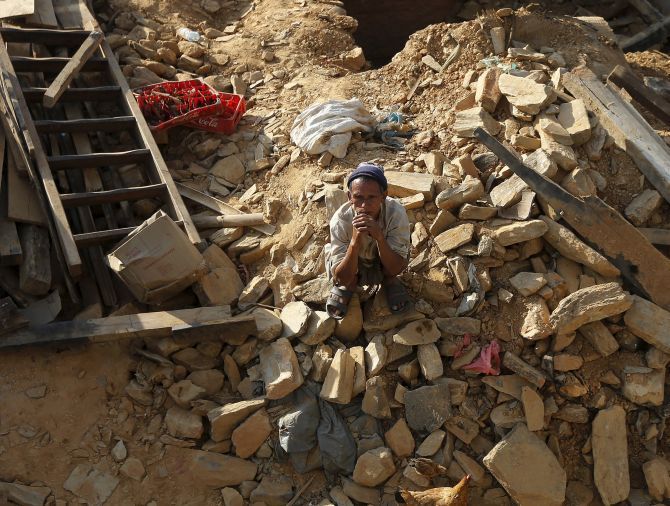 An earthquake victim sits on the rubble of a house as he waits for his turn to receive relief material at a village in Sindhupalchowk. Photograph: Adnan Abidi/Reuters

Durga Shrestha, 54, still trembles at the thought of the April 25 earthquake.

While she and her family escaped in time, the fury did not spare a single brick of her home that fateful day.

The mother of five children, robbed of her home and hearth, now sleeps in a makeshift shelter next to her wrecked house in a hilly area, adjacent to the rows of houses flattened by the quake.

“The ‘bhukamp’ (quake) has taken away all from us. Our neighbourhood has turned into a ghost town,” she said.

And, ghost town indeed the area has turned into, as the sight of pile after pile of old houses made of mud and brick, and the stench of dead livestock nauseates passers-by, telling a harrowing tale of death and destruction.

The 7.9-magnitude temblor, with its epicentre in Gorkha district, has claimed nearly 7,000 lives, nine days since it shook the core of the Himalayan nation, with over 2,000 casualties reported here -- the maximum among all the affected districts.

Sindhupalchowk is about 60 kilometre from the capital city of Kathmandu.

The fury has destroyed up to 90 per cent of the houses in the two districts, according to a situation report released by the United Nation’s humanitarian agency Office for the Coordination of Humanitarian Affairs. 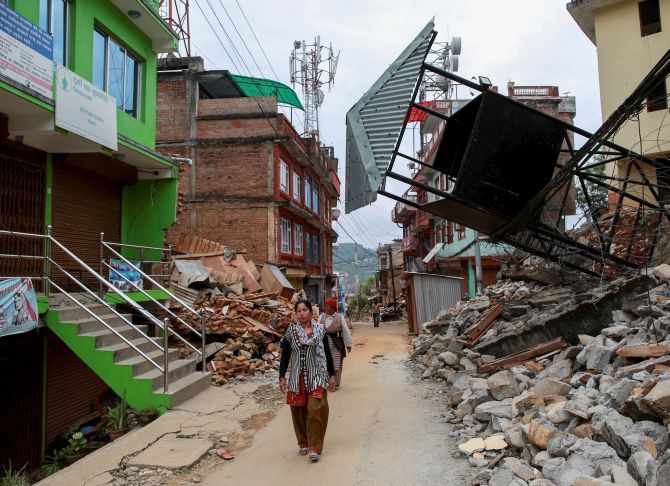 Sindhupalchowk and neighbouring Kavre districts are endowed with immense natural beauty but the destruction brought by the quake have made them stand in stark contrast to each other.

Scenic resorts nestled at the edge of winding streets in the mountainous valley, which earlier bustled with presence of foreign tourists, now wear a deserted look.

Broken, fallen or cracked houses are a grim reminder of the devastation on the otherwise picturesque route lined with pristine water streams and verdant surroundings.

In Andheri village in the district, a restaurant named ‘Hotel Hill View’ situated right before the Son Kosi river used to be filled with the murmur of tourists has now turned into a community shelter for several families rendered homeless in the region.

“Our place used to be filled with visitors and happy foreigners, who loved the location and the natural beauty of the hills and the river. Now, you can only see sad and depressed faces, and most of them scared,” Saroj Shreshta, a 19-year-old business management student said. 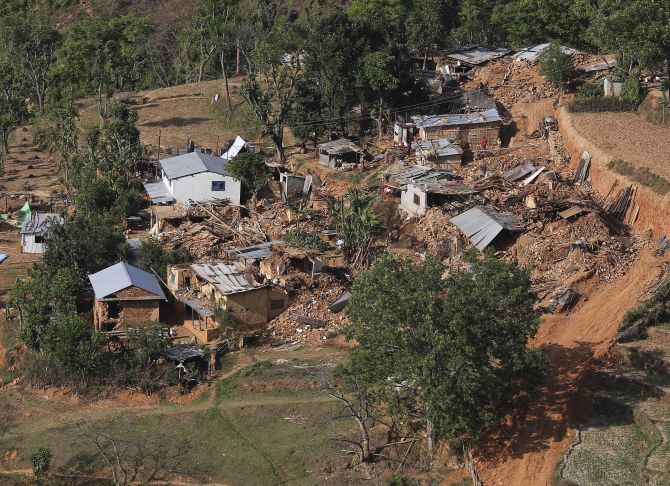 The quake has destroyed most of the home in the Sindhupalchowk area. Photograph: Adnan Abidi/Reuters

Roads have been ruptured by the quake, making it further difficult for rescuers and relief supplies to reach the affected areas.

A fresh landslide occurred on Friday in Dolalghat area, on the border of Sindhupalchowk and Kavre districts, triggering further panic in the already battered region.

But, amid doom and gloom, the spirit of volunteers travelling great distances to deliver supplies to the remotest of villages stands out.

Kathmandu-based restaurateur Chetan Bhandari, who last Saturday took essential supplies to a village in the district sounded critical of the administration’s response to the disaster. 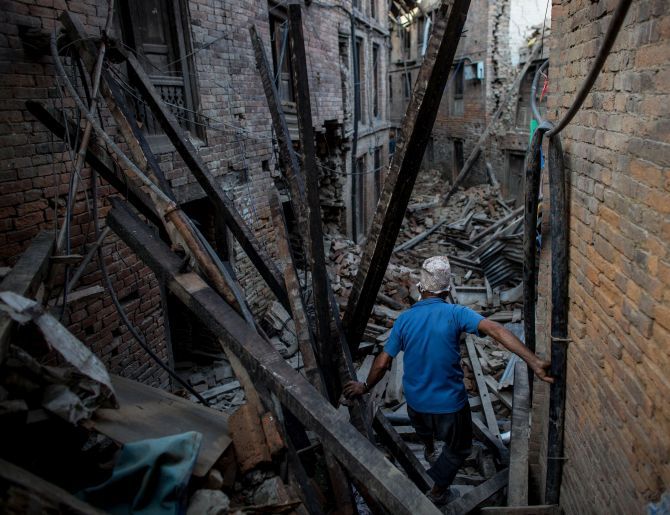 A man climbs over rubble outside his house in Bhaktapur. Many houses, buildings and temples in the capital were destroyed during the earthquake. Photograph: Chris McGrath/Getty Images

“The government has not reached places place like here that are far and difficult to reach. It is only in the comparatively more accessible areas that the government has sent relief,” Bhandari said.

When asked if the government has approached them or supplied essential items, Durga replied in the negative.

“We had stocked 10 bags of grains. We have exhausted five, we hope the other five will help us last through,” she said.

A UN official visiting the district to monitor the situation said: “The local government officials themselves, in the districts are the victims of the quake, so how does one expect timely help. 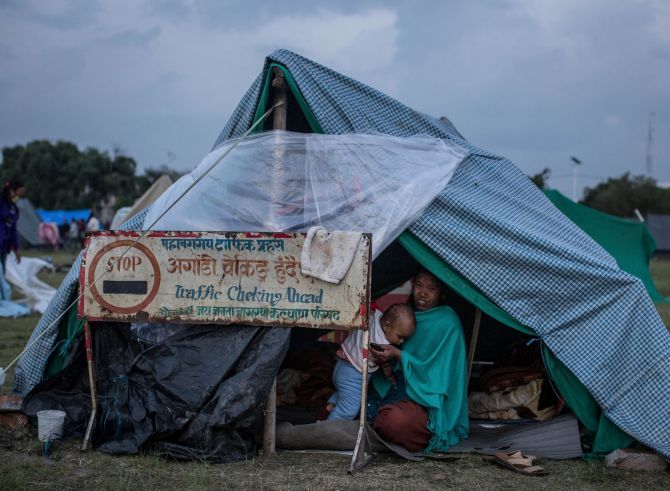 A woman sits with her child in a tent at the temporary camp for earthquake evacuees at Tundikhel Park. Photograph: Chris McGrath/Getty Images

The district has a population of over 2,50,000 and international emergency response teams like the International Federation of Red Cross and Red Crescent Societies and Doctors Without Borders besides other NGOs are providing the vital human link and compassionate touch amid the chaos.

MSF is sending mobile clinics to the remote areas of the district in two helicopters and evacuating the critically injured, if needed.

The IFRC has supplied medical and non-food relied such as blankets, tarpaulins, kitchen-set and hygiene items among others for people in the far-flung area of this worst-affected district.

“It is hard to believe a place of such great beauty has been at the receiving end of a mighty fury of nature,” said Bhandari, who himself has been forced to live in a hotel. 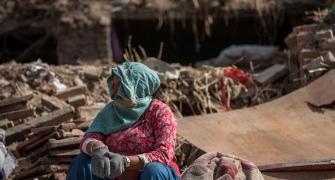 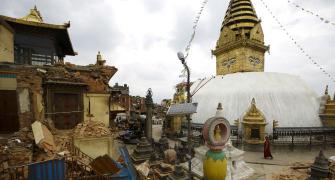 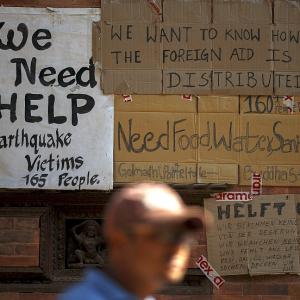 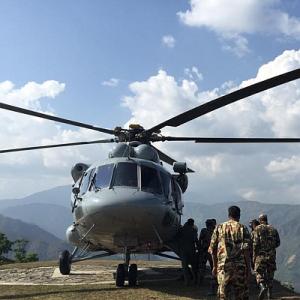