It was the first-ever Indian circumnavigation of the globe by an all-women crew, the Navy said. 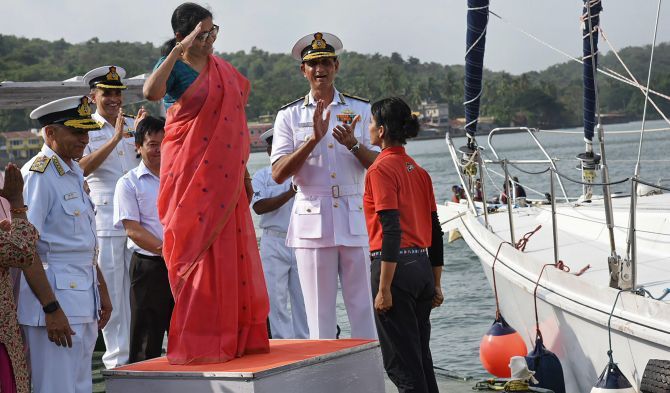 IMAGE: Defence Minister Nirmala Sitharaman salutes one of the officers of the Indian Navy's six-member all-women crew of INSV Tarini, who circumnavigated the globe in over eight months, at Panaji in Goa, on Monday Navy chief Admiral Sunil Lanba also seen on her right. Photograph: PTI Photo

An all-woman crew commanding the INSV Tarini on Monday returned to Goa after successfully circumnavigating the globe in a 55-foot sailboat in more than eight months, the first-ever Indian expedition steered by women sailors.

MUST READ: India's first all-women crew set to sail around the world

The 'Navika Sagar Parikrama' expedition was flagged off on September 10. 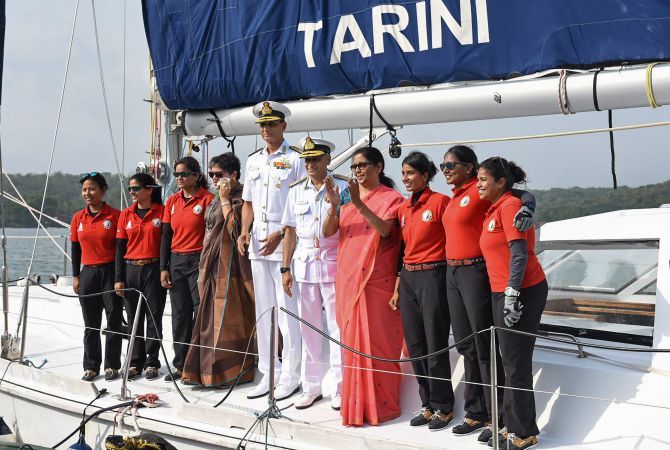 "Prime Minister Narendra Modi kept a tab on what is going on (with Navika Sagar Parikrama). Occasionally, he also directly spoke to them and kept the nation's motivation and interest on," Sitharaman said after receiving the crew.

She said she felt 'honoured' by the achievement of the young women. 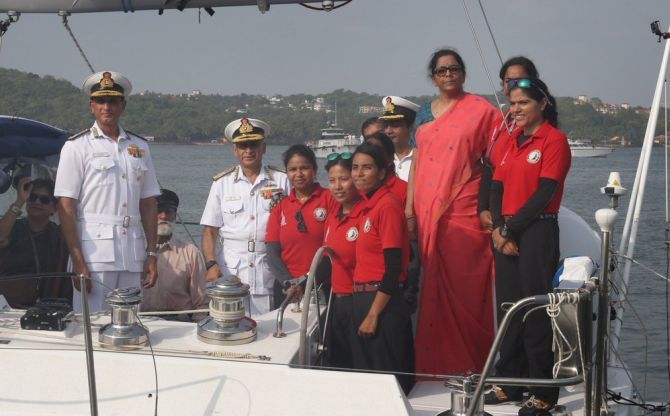 "I just don't want to say that it is a pleasure (to receive the crew), I feel honoured and I feel humbled by the great achievement of these six women," the minister said.

She recalled that flagging off the crew on September 10 last year was her first 'out-of-Delhi appointment', three days after she became the defence minister.

She praised the women for making history.

"And today, by the grace of God and the grit and courage that the girls have shown, they are back home to join all of us, having made history," she said.

The minister said 'the feat is not about girls' achievement, it is (about) youngsters from India achieving and it is a whole motivation for the youth. The women of the country have shown to youngsters that if they want to do something they can do it indeed'.

She said she followed the circumnavigation everyday.

"I have not contributed anything except one retweet of the navy spokesperson in the morning to say where they are and what is their location. In fact, that just one re-tweet in the morning became the first thing...wherever I went in the country, the conversation would start with 'how are the girls'?" she said. 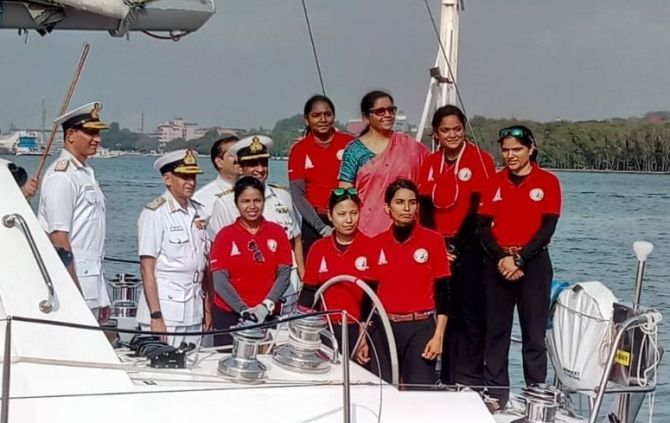 "That became the conversation amongst many people who were closely following ministry of defence," Sitharaman said.

The minister said the girls have made history not only for themselves but also for the Navy.

"In every small way and big way, the Navika Sagar Parikrama is something that we can be proud of for generations to come," she said.

The six women officers were trained for the project under Captain Dilip Donde, the first Indian to solo-circumnavigate the globe between August 19, 2009, and May 19, 2010, on board the Indian-built vessel INSV Mhadei, a Navy official said.

"The crew covered 21,600 nautical miles in the Indian-built sailing vessel INSV Tarini that visited five countries and crossed the Equator twice. It sailed across four continents and three oceans, and passed south of the three Great Capes - Leeuwin, Horn and Good Hope," the spokesperson said.

Congratulating the crew, Prime Minister Narendra Modi tweeted, 'Heartiest congratulations to Indian Navy's all-women crew of INSV Tarini for completing the Navika Sagar Parikrama, their mission to circumnavigate the globe. Welcome home. The entire nation is proud of you.'