Cyclone Nisarga, hovering over the Arabian Sea, is likely to make landfall at the coastal town Alibaug near the megapolis between 1 pm and 4 pm on Wednesday, a senior India Meteorological Department official said. 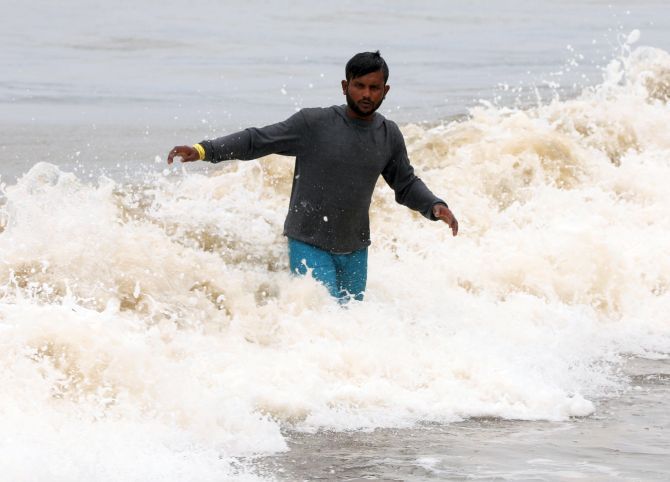 IMAGE: A fisherman makes his way back to the shore after anchoring his boat before cyclone Nisarga makes its landfall, in Mumbai. Photograph: Francis Mascarenhas/Reuters

Already battling a raging pandemic, Mumbai hasn't experienced a serious cyclone landfall since 1891, according to a weather expert.

"Nisarga is 95 km away from Alibaug and 150 km from Mumbai. It is likely to cross with an intensity of a severe cyclonic storm close to south of Alibaug, India Meteorological Department Mumbai's deputy director general of meteorology K S Hosalikar said. 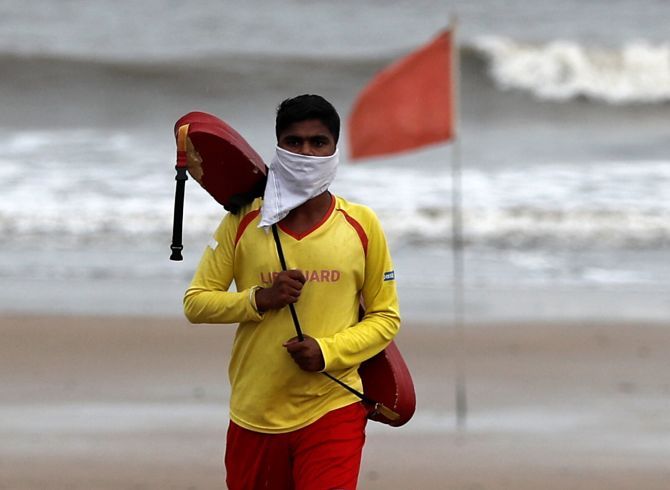 Steeped in colonial history, Alibaug is a quaint little town located about 110 km from Mumbai, and is replete with sandy beaches, clean unpolluted air and plenty of forts and temples. A speedboat from Mumbai to Mandwa jetty near Alibaug takes 20 minutes and is an easy option for those wishing to reduce road travel time.

Cyclone Nisarga, headed towards the coastline of Maharashtra and Gujarat, comes a week after Cyclone Amphan wreaked havoc in West Bengal.

Hosalikar said Mumbai, Thane, Raigad and Palghar will be under the influence of the storm. In Mumbai too, the winds may flow at 100 kmph to 110 kmph, he said.

The IMD said the storm may also gust to 120 kmph and is approaching the coastal belt at a speed of 11 kmph.

It has already predicted heavy to very heavy rainfall in the aforesaid coastal districts of the state. 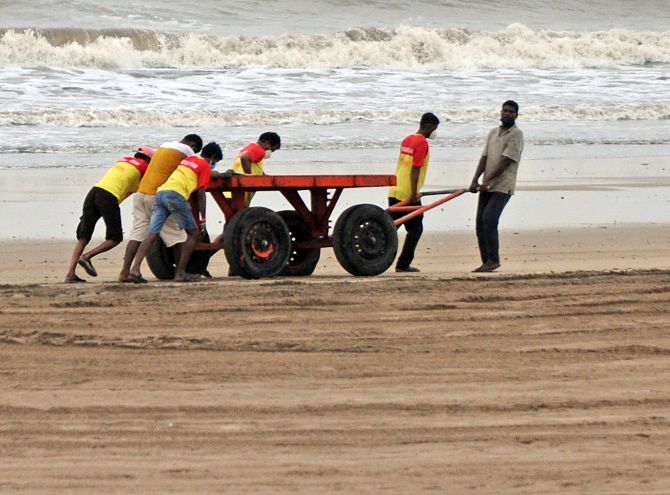 The department has predicted the storm will have an impact on areas in North Maharashtra, Pune, Ahmednagar, where rainfall is expected.

The department has said kuccha houses, trees, electric poles may fall as they may not be able to withstand the speed of the storm.

The state government authorities have already asked people in vulnerable areas to shift to safer places.

Bracing for the impact of what is being billed as the most severe cyclone to hit Mumbai, the Central Railway rescheduled special trains and many airlines also cancelled their Mumbai operations.

With the cyclone set to make landfall on Wednesday, Maharashtra and Gujarat activated their disaster response mechanism, deploying National Disaster Response Force teams and evacuating people from areas likely to be hit.

As a precautionary measure, the NDRF has evacuated around 1,500 people staying in a shelter at Thal near Alibaug, an official said. The teams also evacuated people from Uttan and Mira Bhayandar, he added.

The teams conducted a recce of Palghar and Raigad coast early on Wednesday, the official said.

Maharashtra and Gujarat have opened new fronts to tackle the fallout of the cyclone.

Prime Minister Narendra Modi spoke to their chief ministers on Tuesday and assured them all possible help from the Centre.

Nearly 43,000 people living near the coastline in Gujarat's Valsad and Navsari districts have been shifted to safer places as the state prepares to face the approaching cyclonic storm, officials said. All fishing boats which were out in the sea off Palghar coast have returned, an official said.

As many as 577 fishing boats from Palghar had gone out in the sea and till Monday evening, 564 came back. 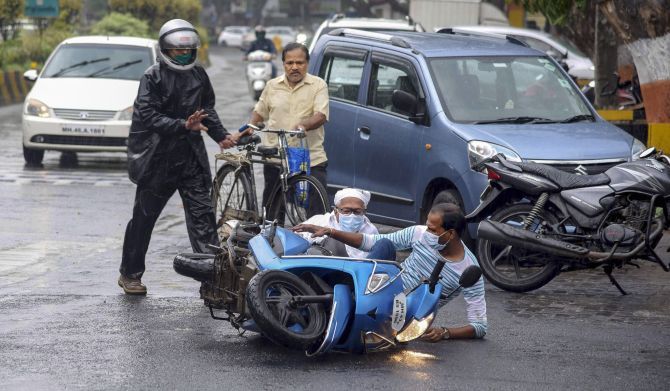 IMAGE: Commuters rush to help bikers who met with an accident after their bike skidded off the road during light rainfall, in Navi Mumbai. Photograph: PTI Photo

Ten teams of the NDRF have been deployed in parts of Maharashtra for rescue operations in view of the cyclonic storm, Chief Minister Uddhav Thackeray said.

An alert has been issued for Mumbai city and suburbs, Thane, Palghar, Raigad, Ratnagiri and Sindhudurg districts.

Town planning authority MMRDA said nearly 150 patients at its COVID facility in Bandra Kurla Complex in Mumbai were shifted as a precaution ahead of the cyclone.

The Navy has has kept five flood teams and three diving teams on stand-by in Mumbai, the official said. These teams, trained and equipped for rescue operations, are stationed at various naval areas across Mumbai and can provide early response over a larger area, he said.

"We have evacuated more than 3,500 people from koliwadas (fishermen colonies) and temporary houses to safer structures like schools, community halls and government buildings," superintendent of police Raigad, Anil Paraskar said. 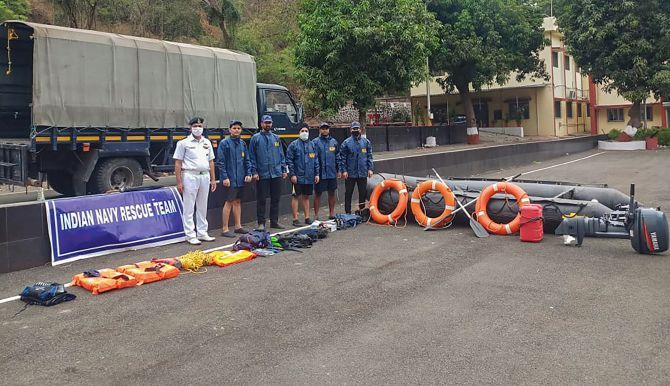 Maharashtra Deputy Chief Minister Ajit Pawar on Wednesday urged people from the states coastal belt to remain in safer places in view of the cyclonic storm Nisarga, which is likely to make landfall in the afternoon.

Pawar said people should not step outside home till the intensity of the storm fades.

People from Mumbai, Thane, Palghar, Raigad, Ratnagiri and Sindhudurg districts should remain in safer places, considering the landfall cyclonic storm Nisarga is set to make near Alibaug from Arabian sea, a statement quoted Pawar as saying.

The administration is taking complete care to ensure there is no loss of life due to the cyclone, said Pawar, who is also the state's finance minister 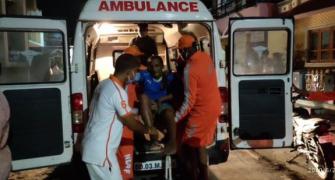 Evacuations on as Maha braces for cyclone Nisarga 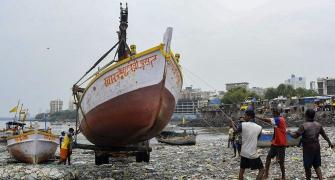 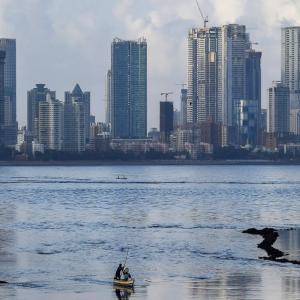 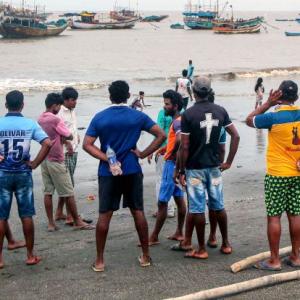