A day after heavy showers pounded Mumbai and neighbouring areas, the rain intensity reduced on Thursday morning and water receded in some flooded areas, leading to gradual resumption of rain and road transport services, officials said. 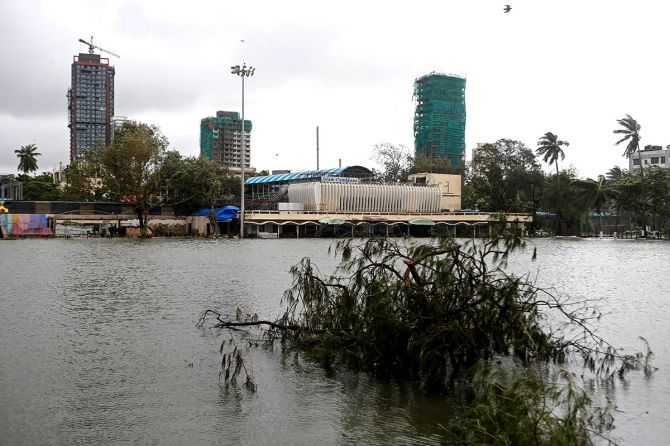 IMAGE: A fallen tree is seen next to a waterlogged gymkhana after heavy rainfall in Mumbai. Photograph: Francis Mascarenhas/Reuters

However, some areas in south Mumbai, which witnessed a record rain on Wednesday, were still water-logged, they said.

The India Meteorological Department (IMD) has predicted moderate to heavy rainfall in the city and suburbs and intense showers in some parts of the Mumbai Metropolitan Region in next 24 hours. IMAGE: A woman drains out water from her house after flooding caused by incessant rains at BIT Chawl area, Parel, in Mumbai. Photograph: PTI Photo

'Rains have reduced since night, but Colaba has been setting up another record for August rainfall,' he tweeted. IMAGE: A child plays on a waterlogged street after heavy rain in Mumbai. Photograph: ANI Photo

While some areas of south Mumbai were still inundated, water receded in most other parts of the city and suburbs, the Brihanmumbai Municipal Corporation (BMC) said.

According to BMC's update till 8 am, areas like BPT Colony at Wadala, Nair Hospital in central Mumbai, Maharshi Karve Road and Sakkar Panchayat area in south Mumbai were still water-logged. 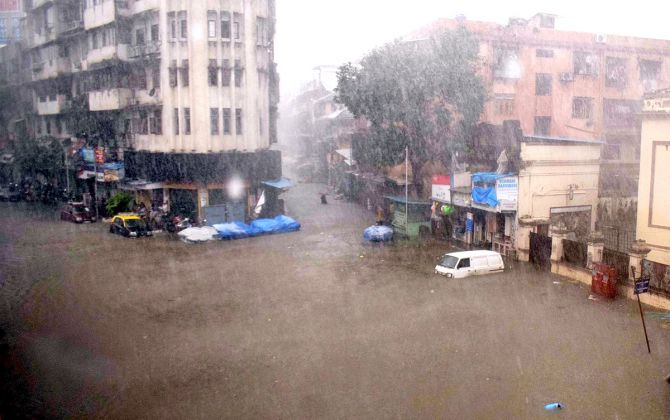 Except for the Dahisar subway, no other subway was inundated and there was also no water-logging in Hindmata, Parel TT and Mumbai Central areas.

A Central Railway Spokesperson said local train services resumed around 7.45 am between the Chhatrapati Shivaji Maharaj Terminus (CSMT) and Thane on the main line and between CMST and Vashi on the harbour line after inspection of tracks, signals and overhead systems. 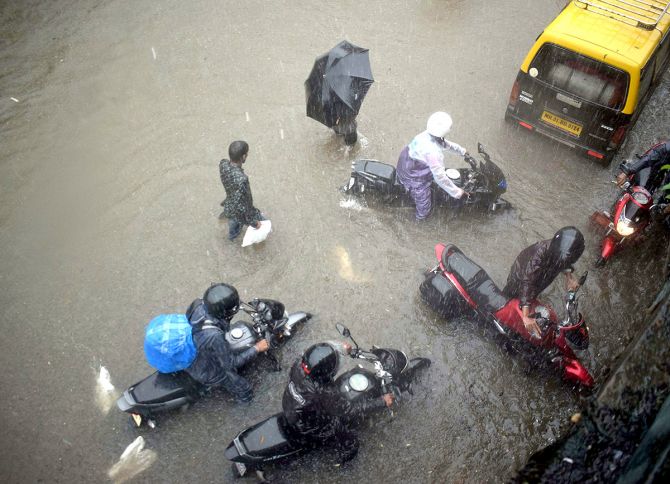 On Wednesday, due to heavy water-logging on tracks between CSMT and Kurla, the suburban services on CSTM-Thane main line and CSMT-Vashi harbour line were suspended from 4 pm. The Western Railway local train services, which were also suspended on Wednesday due to water-logging on tracks between Churchgate and Mumbai Central stations, resumed early Thursday morning, an official said.

Bus services of the Brihanmumbai Electric Supply and Transport (BEST), the city civic body's transport wing, also resumed, the BMC said, adding that services were diverted to alternate routes in a couple of locations. IMAGE: A man pushes his bicycle through a flooded road. Photograph: Hemanshi Kamani/Reuters

South Mumbai was the worst affected due to heavy rain on Wednesday and several streets at the Marine Drive, Mantralaya and Kalbadevi witnessed heavy water-logging for the first time in recent years.

Hosalikar said intense rainfall was likely in north Palghar as a radar image indicated intense clouds over the area.

The cloud cover over Mumbai and Thane was comparatively less, he said.