High drama unfolded on Wednesday morning near the resort where rebel Congress MLAs from Madhya Pradesh are staying, as senior party leader Digvijay Singh staged a protest accusing the police of not allowing him to meet the legislators. Singh, who has been detained by the police, accused the Bharatiya Janata Party of holding the MLAs captive and said that he would go on a "hunger strike".

"BJP MLA Arvind Bhadoriya and an MP are holding them captive. Why can't I meet my MLAs, my voters (for Rajya Sabha election), my own party people. What is the BJP doing in between?" he said.

Singh alleged that Congress MLAs inside the resort want to meet him, but they are not being allowed.

The former Madhya Pradesh chief minister then drove straight to the resort, where they were denied entry by police, sources said adding that Shivakumar and other state leaders have also reached the spot.

In a video released by the Congress, Singh is seen saying, "I'm an ex-chief minister of Madhya Pradesh, who is a Rajya Sabha election candidate. The voting is on March 26. Twenty-two MLAs are staying here and they want to talk to me. But their phones have been taken away and the police are not allowing us to talk to them."

"The police are saying that the MLAs have a security threat. I have told them (police) that I'm a Gandhian and I don't have a bomb or any rifle, allow them to meet us and I will go back." The MLAs have written to the police stating that they don't want to meet anybody as they fear trouble, and the same has been communicated to Singh and others, the police officer said, adding, "We have also shown the letter to him."

Questioning the police's claim, Singh said, "They (police) don't know the MLAs' name or anything, how can we know that he (SP) has spoken to the legislators?"

Claiming that no letter by the MLAs was shown to him, Singh said something on a phone was shown to him which had names of two legislators, "one of whom had been a minister in my government".

"Those very MLAs had sent a word to me asking me to come here," he said, and alleged that the signatures of MLAs were forged.

The 22 rebel Congress MLAs held a press conference on Tuesday and claimed that 20 more party MLAs want to join them and they were thinking of crossing over to the BJP in the days to come.

In a massive setback for the Congress, its prominent youth leader Jyotiradtya Scindia quit the party and in a coordinated rebellion last week 22 MLAs loyal to him resigned in Madhya Pradesh, pushing the 15-month-old Kamal Nath government to the brink of collapse. Scindia joined the BJP on March 11. 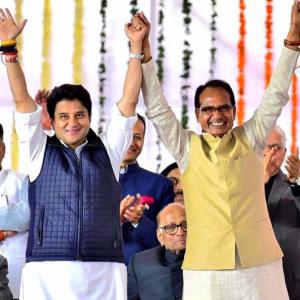 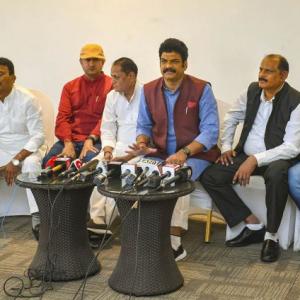