At least 42 people have died in rain-related incidents in Maharashtra, 36 of them in a landslide in coastal Raigad district, while 10 persons were feared trapped after a landslide in Ratnagiri district as heavy rains continued to wreak havoc in Maharashtra, where residents are being evacuated from hilly regions in Konkan, officials said on Friday. 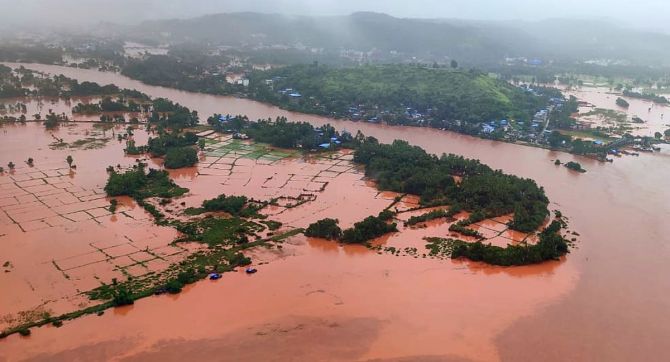 Eleven people on board a bus had a narrow escape as they were rescued just before the vehicle got washed away into a river in Kolhapur district of Maharashtra early on Friday, police said.

No immediate relief appears in sight as the India Meteorological Department issued a red alert for six districts which have been already pounded by downpour, forecasting "extremely heavy" rainfall and recommending preventive actions.

The alert was issued for the next 24 hours for the districts of Raigad, Ratnagiri and Sindhudurg in coastal Konkan and also for Pune, Satara and Kolhapur in Western Maharashtra.

The landslide in Raigad district took place near Talai village in Mahad tehsil on Thursday evening.

The search and rescue operation is on by National Disaster Response Force teams, personnel of the local disaster management cell, police and district administration, he said.

In the 24 hours ended at 8.30 am on Friday, 165 mm average rainfall was recorded in Raigad district. Chief Minister Uddhav Thackeray expressed grief over the loss of lives in the landslide and spoke to the Raigad collector about the flood situation on Mahad, an official release said in Mumbai.

Thackeray directed the district administration to expedite rescue operations and clearing of roads.

The water levels have receded but in hilly areas, roads and bridges have been washed away. Around 2,000 food packets have been distributed to people in Mangaon in Raigad district, the release said.
Thackeray has asked the authorities to ensure well-being of COVID-19 patients undergoing treatment in various hospitals, the release said.

Six persons were killed in rain-related incidents in Satara district on Friday, including landslides, while three persons were missing in floods, said a senior official from the disaster management department.

The incidents followed a major landslide in the coastal Raigad district on Thursday evening.

Some people have been rescued, the SP said.

"At Ambeghar, 13 or 14 people in four houses are feared trapped, while at Mirgaon, three houses were affected with 8 to 10 people inside," said Bansal, adding that rescue work is underway.

Due to incessant rains, the roads leading to the two villages are either blocked or inundated, making it difficult to bring heavy machines for rescue work, the SP said.

At least 10 persons were feared trapped in a landslide in Ratnagiri district, a senior official said.

In a separate incident, the body of a man was recovered in Chiplun city after the flood water receded to some extent, he said. Parts of Ratnagiri district have been reeling under floods caused due to heavy rains over the last few days, with major rivers in the district flowing above the danger mark.

“At least 10 people are feared trapped under the debris after a landslide in the district. The rescue team has reached the spot. The local residents, who rushed to safety, alerted the police about it,” the official said.

However, details about the incident, including its exact location and time, are yet to be known.

The official said establishing contact has become difficult due to the poor mobile network and it is posing hurdles in reaching out to the affected people and responding to their SOS calls.

He said that the process to identify the body that was found in Chiplun was on.

Maharashtra minister Uday Samant, who reached Chiplun late Thursday night said, “Water has receded from several parts of Chiplun city now. But it is true that the water level was very high and it had crossed the 2005 deluge mark.”

Eleven people on board a bus had a narrow escape as they were rescued just before the vehicle got washed away into a river in Kolhapur district, police said.

The incident occurred around 2.30 am at Pangire village in Bhudargad tehsil when the bus driver, despite being asked by the police and the PWD personnel not to go ahead, drove the vehicle over a bridge even as the water of the Chikodi river was flowing above it, they said.

The water was flowing with strong force, due to which the bus fell off the bridge and got stuck in water before being swept away by the strong currents, he said.

Traffic on the Mumbai-Bengaluru national highway got disrupted on Friday after a stretch of road in Belgaum district of Karnataka got inundated, prompting the police in Maharashtra's Kolhapur to stop the vehicles going to the neighbouring state as a safety measure, officials said.

Rains continued to lash parts of Kolhapur, due to which the Panchganga river in the district is flowing above the danger mark, they said.

Talking about the traffic situation on the Mumbai-Bengaluru highway, Kolhapur's district superintendent of police Shailesh Balkawde said, “Ahead of Kagal (in Kolhapur), a stretch of road near a village in Belgaum district of Karnataka has got inundated due to rainwater on Friday. Therefore, we have stopped the flow of traffic going towards the neighbouring state from the Kolhapur side.”

An official from the Kolhapur district disaster management cell said the water level of the Panchganga river continues to rise.

“Till 9 am on Friday, the water level of the river at the Rajaram weir reached 48.1 feet. It is well above the danger mark of 43 feet,” he said.

A total of 114 bunds have gone under water, he added.

Officials of the district administration had said on Thursday said that as many as 47 villages in Kolhapur were cut off after roads leading to them were submerged in water due to heavy rains and 965 families were shifted to safer places. As the state reeled under monsoon fury, Chief Minister Thackeray visited the disaster management authority control room in Mantralaya in south Mumbai and took stock of the situation arising out of downpour and flooding in Konkan and western Maharashtra.

Thackeray said people residing in hilly and landslide-prone areas of the rain-ravaged Konkan region are being evacuated and expressed grief over the loss of lives in a landslide in Raigad district.

He appealed to people to cooperate with the local administration in the evacuation process in vulnerable areas in the coastal region, a statement from the Chief Minister's Office said.

Thackeray asked people to be alert in the backdrop of the IMD forecasting heavy rains in the next two days in several parts of the state.

He said the local administration should work in coordination for smooth relief and rescue operations in the rain-devastated areas.

Due to discharge of water from the Koyna dam in western Maharashtra, an alert has been sounded in Sangli and Kolhapur districts.

The chief minister asked the authorities to ensure distribution of food, water, medicines and clothes to the people displaced by floods and heavy rains, the statement said.

He said the flood-affected districts of western Maharashtra top the list of coronavirus cases and rescue operations there should be done by adhering to COVID-19 protocols, especially use of face masks.

As many as 14 NDRF teams have been deployed in the affected areas, the chief minister said.

He said 500 people have been rescued in Chiplun in Ratnagiri district and four relief centres have become operational in the coastal town, around 250km from Mumbai.

Also, 22 people stranded on the Kolhapur-Panhala road due to incessant rains have been rescued, the CM added. 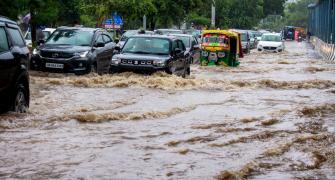 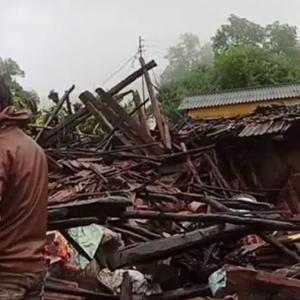 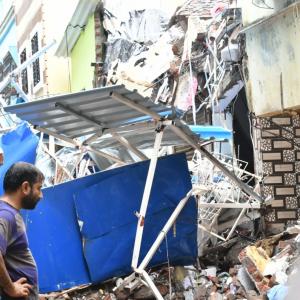