Laying the foundation of a new chapter in relations with Israel, Prime Minister Narendra Modi began his “ground-breaking” visit on Tuesday, receiving an extraordinary welcome by the Jewish nation. 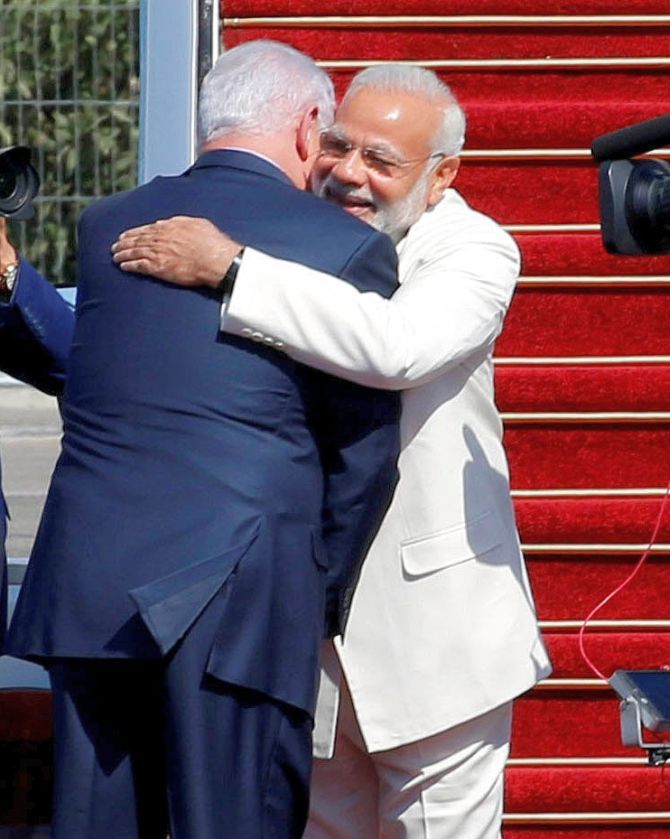 IMAGE: PM Modi and his Israeli counterpart Benjamin Netanyahu are all smiles as they greet each other at the airport. Netanyahu has broken protocol to welcome Modi at the airport. Such a greeting is normally reserved for US presidents and the Pope. Photograph: Ammar Awad/Reuters

The personal chemistry and the warmth between Modi and Prime Minister Benjamin Netanyahu was apparent in their remarks and their hugs.

Reflecting the importance that Israel is according to the first visit by an Indian prime minister since Israel’s establishment 70 years ago, the host nation pulled out all stops to welcome Modi -- Netanyahu broke protocol to come to the Ben Gurion airport, an honour reserved only for the US President and the Pope; Netanyahu’s entire Cabinet was also present as were representatives of various religious orders.

In their prepared speeches, both leaders described each other as, “my friend” and embraced each other three times.

“Aapka swagat hai, mere dost (welcome, my friend),” Netanyahu said in Hindi, adding, “We love India.” Modi responded by speaking a few words in Hebrew, “Shalom (hello), I am happy to be here.” IMAGE: Prime Minister Narendra Modi steps off the aircraft as he arrives for a visit in Israel at Ben Gurion Airport. Photograph: Ammar Awad/Reuters

“It is truly a historic visit,” said Netanyahu while welcoming Modi who was wearing a cream colour ‘band gala’ suit and a dark blue handkerchief in the pocket.

At the start of the three-day visit, Modi was also accorded a Guard of Honour after an Israeli military band played the national anthems of the two countries.

Hailing Modi as “a great leader of India and a great world leader”, Netanyahu said, “we have been waiting for the last 70 years” for a visit by an Indian prime minister.

They vowed to give a push to the bilateral relationship in all aspects and jointly deal with the common threats like terrorism.

“I remember what you told me in our first meeting -- when it comes to India and Israel relations, the sky is the limit. But now, prime minister, let me add even sky is not the limit. We are also cooperating in space,” Netanyahu told Modi.

Talking about the vast possibilities of cooperation between the two countries, he said, “We can do even more, even better together.” 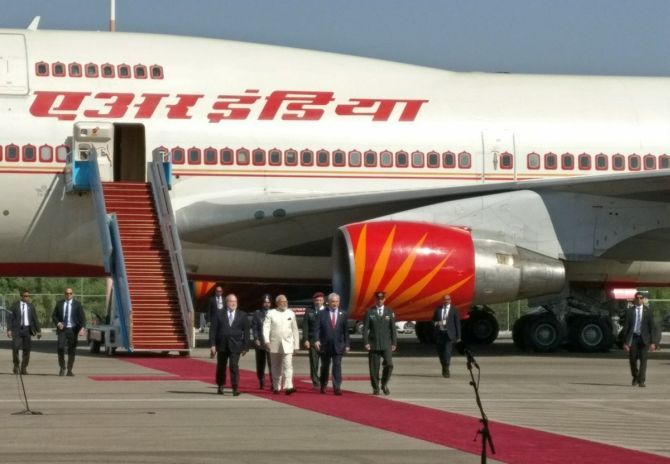 IMAGE: Modi's welcome at the airport was of great pomp. Earlier before his visit, Netanyahu wrote on his Facebook account, "My friend, Indian Prime Minister Narendra Modi, welcome to Israel."
Photograph: @MEAIndia/Twitter

Speaking later, Modi said, “It is my honour to be the first ever Indian prime to undertake this ground-breaking visit to Israel.”

He said his visit was about the strength of the two societies and their strong partnership.

“Building a strong and resilient relationship with Israel will be my intent and focus...We have to secure our societies against the common threat of terrorism,” Modi said.

“Together, we can do even more and even better (for India-Israel ties),” he added.

Noting that India is an old civilisation but a young nation, Modi said, “We have a talented and skilled youth, who are our driving force.”

Describing Israel as an “important development partner”, he said, “This is an exciting journey that we will undertake together, for the good of our people and our society.”

Modi said his visit celebrates the strength of centuries-old links between the two societies and “based on these bonds, our partnership has maintained a strong and sustained upswing since the establishment of full relationship, diplomatic relations, 25 years ago.” 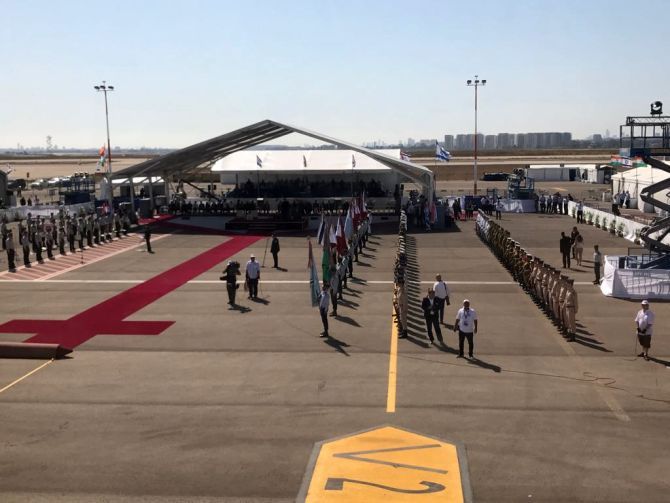 IMAGE: The welcoming of Prime Minister Narendra Modi at the airport.
Photograph: @MEAIndia/Twitter

From the airport, Prime Minister Modi visited the Danziger flower farm in Moshav Mishmar Hashiva along with Netanyahu and Agriculture Minister Uri Ariel to learn about latest innovations and advancements in floriculture.

The farm, about 56 km from Jerusalem, is one of Israel’s leading floriculture companies with approximately 80,000 square metres of state-of-the-art greenhouses specialising in reproduction of plants.

“At the Danziger Flower Farm, advanced agriculture technologies were showcased by the Israeli Government,” Office of the Prime Minister said in a tweet.

The farm named a breed of chrysanthemum after Modi. IMAGE: Prime Minister Narendra Modi honours the memory of the victims of the holocaust at the Yad Vashem Memorial Museum. Photograph: @MEAIndia/Twitter

Modi also visited the Yad Vashem Memorial Museum to honour the memory of the victims of the holocaust that counts among the greatest tragedies in human history.

The museum occupies over 4,200 square metres -- mainly underground -- and emphasises the experiences of the individual victims through original artefacts, survivor testimonies and personal possessions.

The Holocaust was the killing of nearly six million Jews, including some 1.5 million children, by Adolf Hitler’s Nazi Germany. Though the persecution of Jews began in 1933, the mass murder was committed during the more than four years of World War II.

Prime Minister Modi will have wide-ranging discussions on Wednesday with Netanyahu on the full spectrum of bilateral partnership and ways to strengthen it in diverse fields for mutual benefit. They will also have the chance to discuss major common challenges like terrorism.

Modi will meet President Reuven Ruvi Rivlin and address the CEOs of the two countries as well as the Indian diaspora.

He will also meet 26/11 Mumbai terror attack survivor Holtzberg Moshe, who was only two when he was saved by his Indian nanny Sandra Samuel. Moshe’s father Rabbi Gavriel and mother Rivkah were among eight Israelis killed in the attack.

Modi will also pay his respects to the courageous Indian soldiers who laid down their lives during the liberation of Haifa in 1918.

During his visit to Israel, Modi will not travel to Ramallah, the seat of the Palestinian Authority, to meet with Palestinian leaders, as is common for visiting foreign dignitaries

He, however, said on the eve of his visit that India believes in a two-state solution in which both Israel and a future Palestinian state coexist peacefully.

India supports all efforts to find an acceptable solution to all the pending issues, including Jerusalem, he added.

The two-state solution envisions independent Israeli and Palestinian states coexisting side by side peacefully.

This year, India and Israel are marking 25 years of their diplomatic relations. 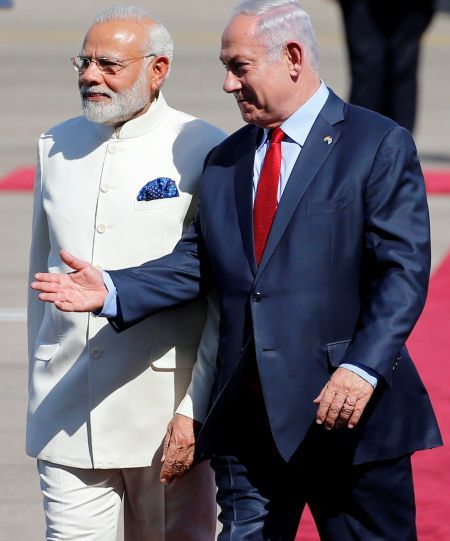 Prime Minister Narendra Modi hailed the sacrifices of his Israeli counterpart Benjamin Netanyahu’s elder brother who was killed exactly 41 years ago while saving the lives of Israeli hostages in Uganda.

“Today is July 4. Exactly 41 years ago, since Operation Entebbe. The day, when your prime minister and my friend Bibi lost his elder brother Yonatan while saving the lives of so many Israeli hostages,” Modi said in his brief address at the Ben Gurion airport.

An Air France flight from Tel Aviv to Paris was hijacked and ended up being diverted to remote Entebbe Airport. An operation was launched under the command of Yoni in which all seven hijackers were killed. Three hostages were also killed.

The mission was successful, with 102 of the 106 hostages rescued, but elder Netanyahu was killed in action -- the only one among the Israeli forces to die.

The Operation Entebbe was later renamed “Operation Yonatan” in his honour.

“Your heroes are an inspiration for the younger generations,” Modi told Netanyahu, who was also a member of Sayeret Matkal.

Harinder Mishra
© Copyright 2021 PTI. All rights reserved. Republication or redistribution of PTI content, including by framing or similar means, is expressly prohibited without the prior written consent.