On the sweeping plains at the foot of Mount Kilimanjaro, a group of female wildlife rangers is making history by defying patriarchal norms. 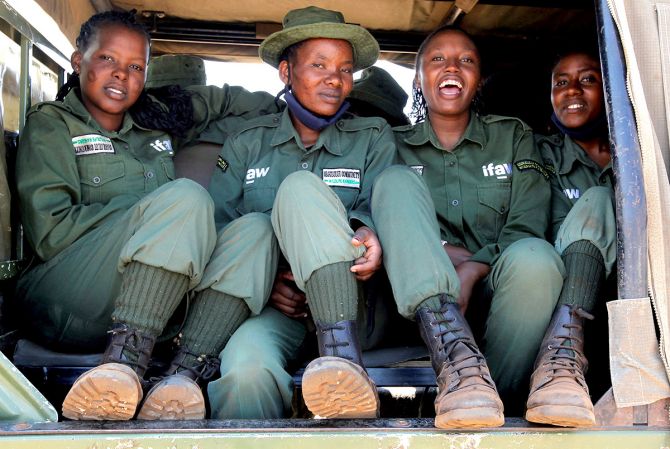 IMAGE: Members of Team Lioness, an all-female Kenyan ranger unit, patrol in their pickup truck as they stay at Risa camp within the Olgulului conservancy in Amboseli, Kenya. Photograph: Njeri Mwangi/Reuters

In Africa's Tanzania a group of female wildlife rangers is making history by defying patriarchal norms that have been passed down for centuries, patrolling against poachers instead of doing household chores.

Their job is to protect wildlife from poaching, trafficking in bushmeat and human-wildlife conflict. 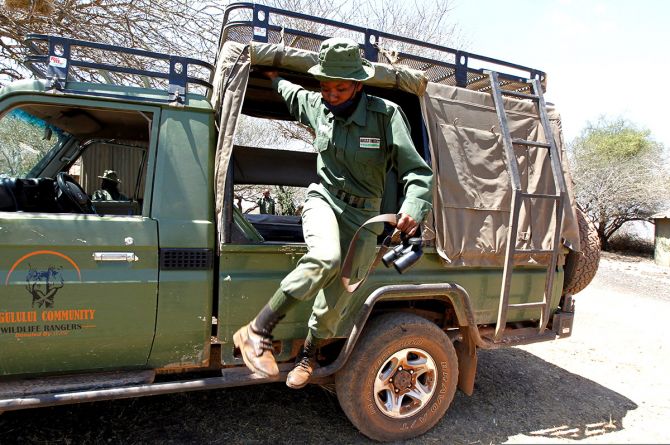 Team Lioness members say they overcame community resistance to women working outside the home and hope their precedent-setting example will help shift mindsets.

“First, the community believed I will not make it because they believe I am weak. Our work in the community was to give birth and do chores,” 24-year-old Purity Amleset was quoted as saying.

“They thought that this is only meant for men so they have been discouraging us ... but we told them, ‘No, we will do it and we will make it,’” Amleset added.

Sharon Nankinyi, another ranger, said the day she was chosen to enter the team was the best day of her life.

“It’s rare for a woman in our community to be a ranger. With us being the first women rangers we are changing the taboo and men and our dads respect us. We have fought for the rights of girls in our community,” the 20-year-old was quoted as saying by Reuters. The female rangers, all aged 17 to 26, have secondary education and are the first to earn formal employment in their families.

Recruitment was done on the basis of their education qualifications, with each of the eight clans within the community getting a slot to ensure equality.

Along with other members of Team Lioness, Purity underwent a three-week paramilitary training before joining the unit.

“A lot of times, we deal with irate members of the community when their livestock is attacked by wildlife.

It requires a lot of wisdom to calm them down, putting in mind that some are armed and could easily harm us,” she says. 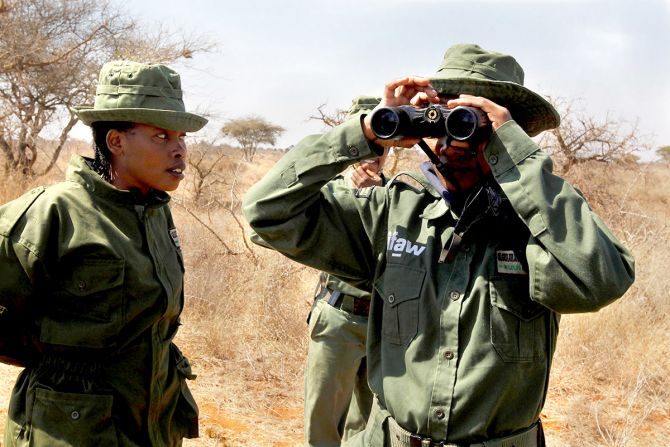 IMAGE: A member of Team Lioness uses binoculars during a patrol. As the women patrol, their bonds are clear -- they chat and joke on the long walks in between visits to residents, who they ask whether predators are bothering cattle or if any strangers are moving through the area. Photograph: Njeri Mwangi/Reuters

Patrick Papatiti, the head of the community rangers for the Olgulului-Ololarashi group ranch surrounding the national park, said the idea for an all-female ranger group gained ground around two years ago when the ranch, owned by the Maasai community, started working with the International Fund for Animal Welfare.

When the idea was floated to the ranch's leadership “they were a little hesitant, not because they didn't like it but because they believed the society will not accept it," Papatiti said.

A significant population in the community felt that women would not be able to do the work, he said. “There was also fear that this project would empower women, and if it's successful then definitely other perceptions in society can be challenged."

Despite the initial reluctance, each of the eight Maasai clans after extensive outreach eventually sent representatives to be interviewed for the jobs.

“A few of us who believed in them knew very well with time ... that women can do as well as men,” Papatiti said. 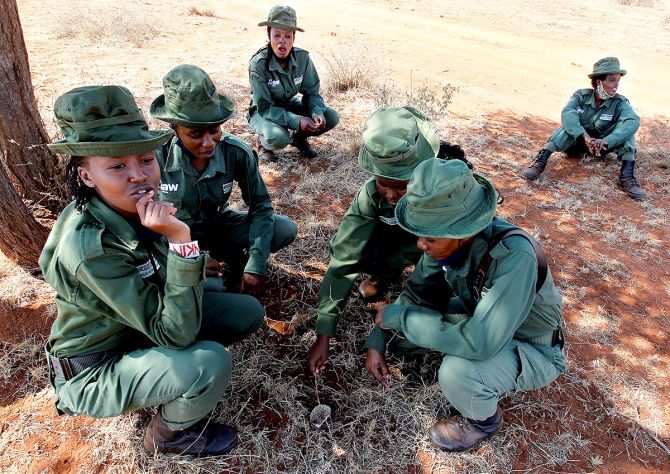 IMAGE: Members of Team Lioness take a break under a tree. The rangers carry out 20 km patrols to visit the local community, track and record GPS coordinates of wildlife sightings, as well as threats like snares or any suspicious activity along the way. Photograph: Njeri Mwangi/Reuters

He said Team Lioness has exceeded expectations. The women have excelled in intelligence-gathering because they are easily trusted with information and are the best data-collection unit because all have high school educations.

Good relationships with the community have contributed to Team Lionesses’s success.

When the unit encounters armed poachers or threats of big magnitude, they get backup from Kenya Wildife Service rangers.

On a day, rangers can walk up to 30 miles scanning for threats to wildlife. The unit has two trucks for rapid response operations.

They also conduct night patrols and ambushes based on the intelligence they receive. IMAGE: Sharon Karaine, member of Team Lioness is welcomed by Maasai women in traditional costumes as she arrives home from the Risa camp, where she stayed due to the coronavirus disease. Photograph: Njeri Mwangi/Reuters

The coronavirus pandemic has shut down the tourism industry in Kenya that provides an income to many Maasai living near the park. Tourism provides nearly 10 per cent of Kenya’s GDP, with 2.5 million tourists visiting last year.

With no source of income, some community members have turned to poaching for bush meat, Papatiti said. Fourteen giraffes have been killed this year.

That poses a new challenge for Team Lioness and their ranger colleagues, who usually go about their work on the vast ranch on foot and unarmed, relying on armed government park rangers as backup. 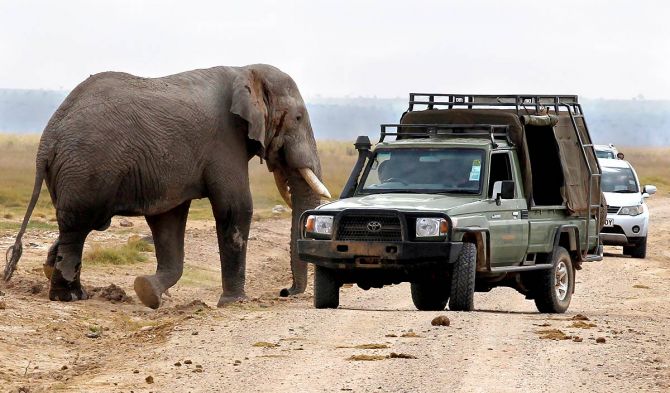 IMAGE: An elephant walks near a patrol vehicle of Team Lioness at the Amboseli National park, Kenya. Photograph: Njeri Mwangi/Reuters

Team Lioness is funded by the International Fund for Animal Welfare, which helped form the unit in 2017 to encourage more women to take part in conservation.

The fund says they managed to stop almost all poaching in the area last year. Sometimes the women are accompanied by male rangers, and sometimes they go by themselves. 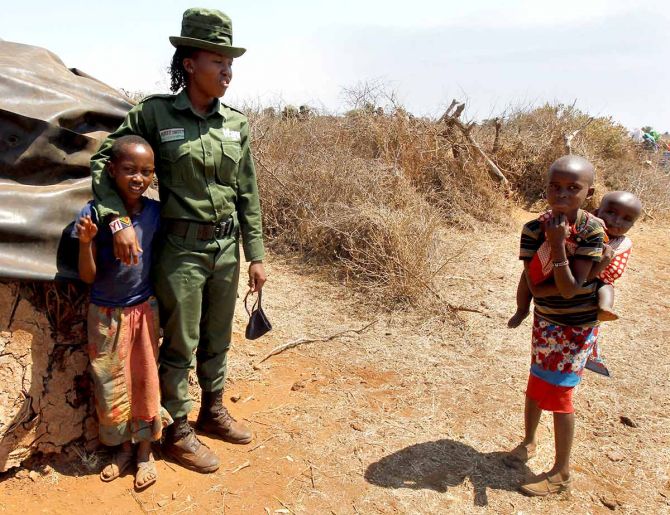 IMAGE: Sharon Karaine, member of Team Lioness meets children to sensitise them against poaching, as they stay at Risa camp. Photograph: Njeri Mwangi/Reuters

This unit has also inspired young girls like Purity’s sisters by giving them role models. 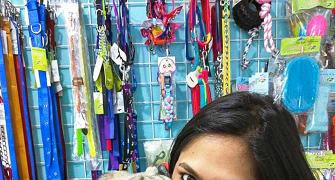 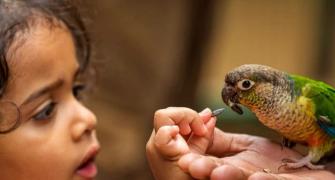 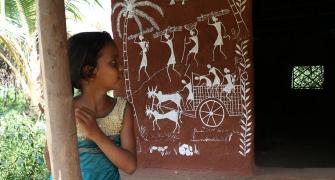 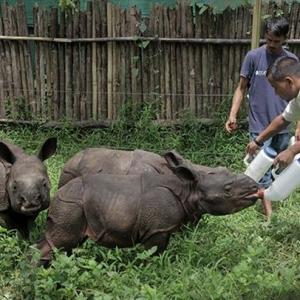