Mamata vs CBI escalates into Opposition against Modi government

A political firestorm raged on Monday as Mamata Banerjee’s sit-in protest against Central Bureau of Investigation’s bid to question Kolkata police chief in chit fund scam cases entered the second day, with the West Bengal Chief Minister declaring her agitation to save the “Constitution and country” will go on and she was ready to face the consequences. 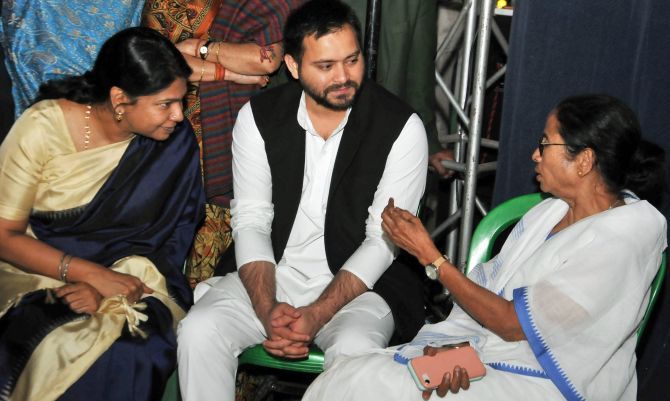 Virtually all opposition parties rallied behind Banerjee’s direct confrontation with the Modi government, even as the Bharatiya Janata Party called it an “alliance of corrupt” and Home Minister Rajnath Singh told Parliament that developments in West Bengal were indicative of a “breakdown of the Constitution”.

Trinamool workers took to streets burning effigies of Prime Minister Narendra Modi and BJP chief Amit Shah and blocked trains, while the BJP lined up its top leaders to step up the counter-offensive against Banerjee and other opposition leaders.

The ripple effect of political tremors in West Bengal were felt in several state capitals, as Banerjee’s combative posturing on the issue drew support from several regional satraps trying to sew up an anti-BJP alliance ahead of Lok Sabha polls, expected in April-May. 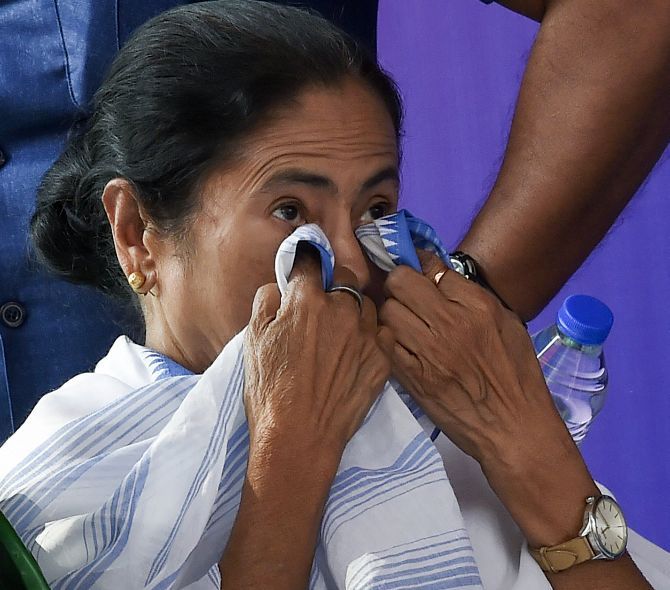 “This is a satyagraha and I’ll continue (it) till the country is saved... Constitution is saved,” the firebrand Trinamool Congress boss said at the protest site.

She added that her dharna against the CBI's attempt to grill the Kolkata Police chief in the chit fund scam cases will continue till Friday in view of the upcoming boards examinations.

Banerjee is sitting on a dharna at the Metro Channel in Esplanade area in the heart of the city, the same spot she had sat on a 26-day fast in 2006 against the acquisition of farmland at Singur for the Tata Motors factory.

“This demonstration will continue till February 8. Because the board examinations will be starting soon and we will not be playing the loudspeakers,” she said. The tense standoff between the CBI and the Kolkata police for the second day echoed in Parliament and led to a washout of the proceedings following opposition protests.

“There may be breakdown of Constitution in West Bengal...under the Constitution, the central government has been vested with the power to maintain normalcy in any part of the country,” Singh told Lok Sabha.

“Whatever happened on Sunday indicates constitutional breakdown,” he said.

“I do not have any grudge against any individual. But I am angry over the way institutions are being destroyed and misused,” Banerjee told the gathering at the protest venue. 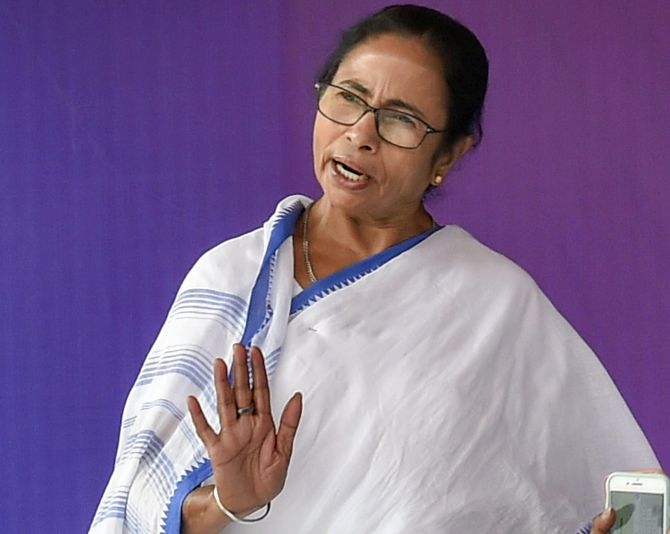 She said it was her government that arrested Saradha chairman Sudipta Sen and claimed Rs 250-300 crore was returned to the duped depositors.

The alleged ponzi scams at Saradha and Rose Valley groups are at the centre of what has become a major political controversy now, as the BJP leaders have alleged that the ruling party leaders in West Bengal have been among major beneficiaries of fraudulent collection of money.

Allegedly, these schemes were being run without necessary regulatory approvals and collected nearly Rs 20,000 crore from lakhs of investors in West Bengal and neighbouring states, through what is commonly known as ‘chit funds’.

Several TMC leaders including parliamentarians like Kunal Ghosh, Srinjay Bose, Sudip Bandyopadhyay and Tapas Pal, and state minister Madan Mitra were arrested for their alleged links with the two groups.

“If you are labelling people who are honest as thieves without any evidence, then I will definitely stand by their side. And for that if I need to give up my life, then I am ready to do that but I will not compromise,” she asserted. 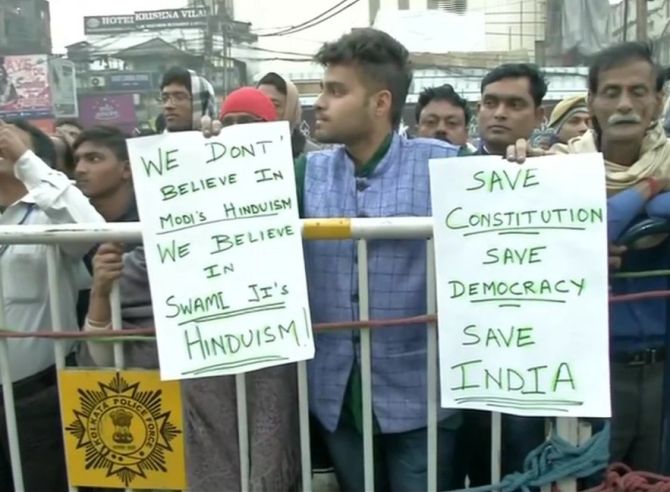 IMAGE: TMC supporters gather outside near Metro Channel where Banerjee is sitting on a dharna. Photograph: PTI Photo

Claiming that the CBI team had knocked on Kumar’s door without a warrant, Banerjee said, “I have fought all through my life but never given up. I am ready to face any consequences.”

The failed attempt by the CBI to question Kumar in connection with the Saradha and Rose Valley chit fund scams on Sunday became the latest flashpoint between the BJP-led Centre and Banerjee, one of its bitter critics. The CBI has accused Kumar of destroying evidence related to the two fraud cases.

A CBI team was bodily prevented from entering Kumar’s residence by police personnel, bundled into vehicles, and detained. Police contingents also descended on CBI premises in Kolkata, as a furious Banerjee rushed to Kumar’s residence before beginning a dharna opposite landmark Metro Cinema. 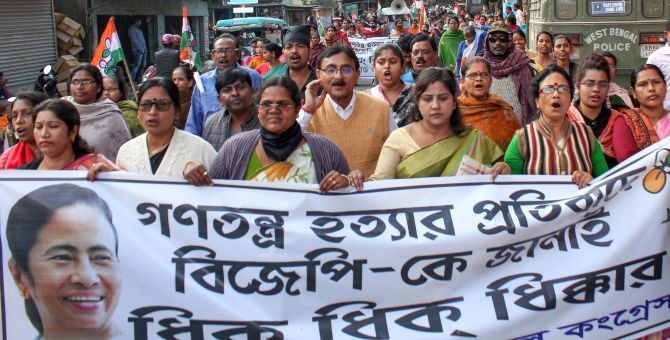 As political temperature soared, Banerjee told her supporters to keep the demonstration peaceful and not to burn any effigies.

“Save the Constitution, save the federal structure, save the police force, save the Indian Administrative Service and all ranks of civil service from disaster,” read the banner that fluttered on the dais Banerjee has made her home since Sunday night.

Rashtriya Janata Dal leader Tejashwi Yadav and DMK MP Kanimozhi arrived at the venue of dharna of West Bengal Chief Minister Mamata Banerjee on Monday night and expressed solidarity and support to her after she began a sit-in protest over the CBI’s attempt to question the Kolkata Police chief.

Tejashwi and Kanimozhi spoke with Banerjee and enquired about the incidents since Sunday evening. Both of them also expressed solidarity with Banerjee. 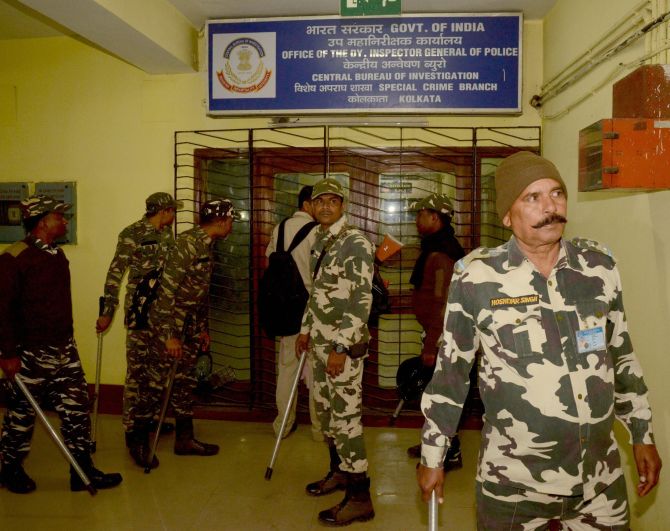 “It is a political conspiracy to use the CBI against political opponents. Narendra Modi is elder to us and he should understand that PM comes and goes but the institutions of this great country remains. Whoever will not compromise with BJP they will be harassed by the CBI and other agencies,” Yadav said.

He said if all political parties don’t unite then the people of this country “will not forgive” them.

DMK leader Kanimozhi while expressing solidarity with Banerjee, said all the opposition parties should work towards staying united and work towards ensuring “that BJP’s dream of returning to power” doesn’t get fulfilled.

“I would say that this episode was Modiji’s pre-election gift to Mamata Banerjee as the BJP has realised after January 19 rally that they won’t return to power after Lok Sabha polls,” she said.

The BJP and the RSS “believe in divisive politics and in order to oust BJP, we should work together”, she said.

Banerjee, while thanking both the leaders, said all the opposition parties are united and will fight “till Modi is ousted from power”.

“If we have to save India we have to oust Modi (Desh ko Bachana hain toh Modi toh Bhagana hain),” she said.

Odisha’s ruling party Biju Janata Dal, which had hitherto kept silent over the development, also threw its weight behind Banerjee.

“We are not a banana republic...,” BJD leader B Mahtab said, adding the CBI was becoming a “political stooge and political weapon” in the Centre’s hand.

Congress leader Mallikarjun Kharge charged that the government was using the CBI as a weapon to finish the Opposition and put in place an autocratic regime.

Nationalist Congress Party leader Sharad Pawar, at whose residence leaders of opposition parties met, said what has happened to Mamata has happened in Delhi to Kejriwal also. 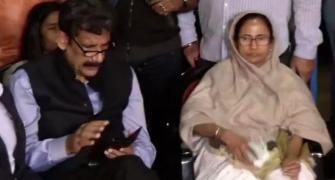 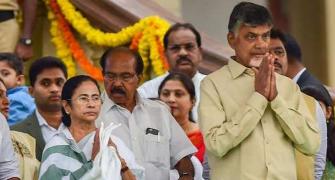 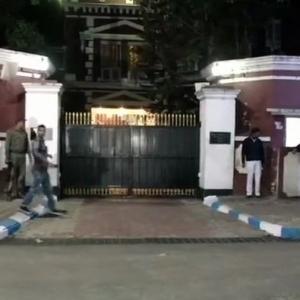