Amid speculation about her being opposition’s prime minister candidate, the firebrand leader said that she was not vying for the top post and that the first priority was to defeat the BJP which is "scared and nervous" to face the 2019 polls because of opposition unity.

Is the BJP taking note of it? 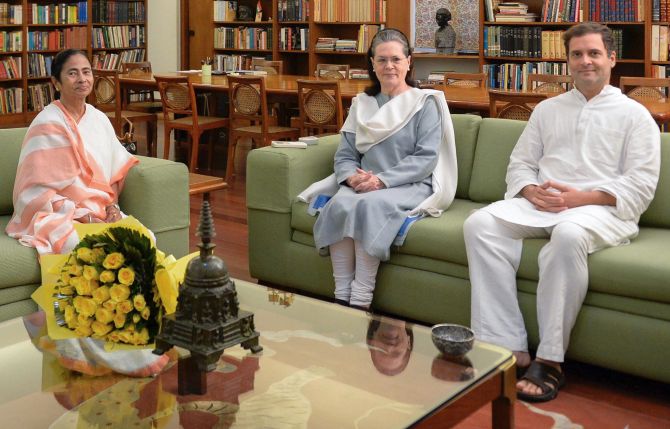 Banerjee met Congress's Sonia Gandhi and Rahul Gandhi at 10 Janpath. After nearly half-an-hour long meeting with the Gandhis, the TMC supremo said, "We discussed the political situation. We discussed how the opposition can together take on the BJP because it knows that it will not come back to power. We also discussed the National Register of Citizens issue." The Congress has indicated its willingness to accept her candidature as opposition's PM face. Photograph: PTI Photo 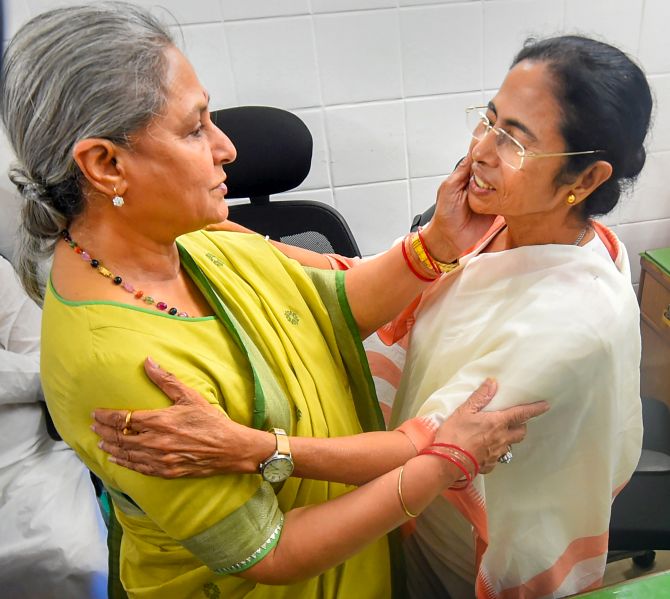 Banerjee met Samajwadi Party MP Jaya Bachchan at TMC's office at Parliament House. Banerjee also invited the leaders of the opposition parties to her January 19 rally in Kolkata. The rally is seen as not just a show of opposition unity but also an attempt to catapult Banerjee to the centrestage. Photograph: Shahbaz Khan/PTI Photo 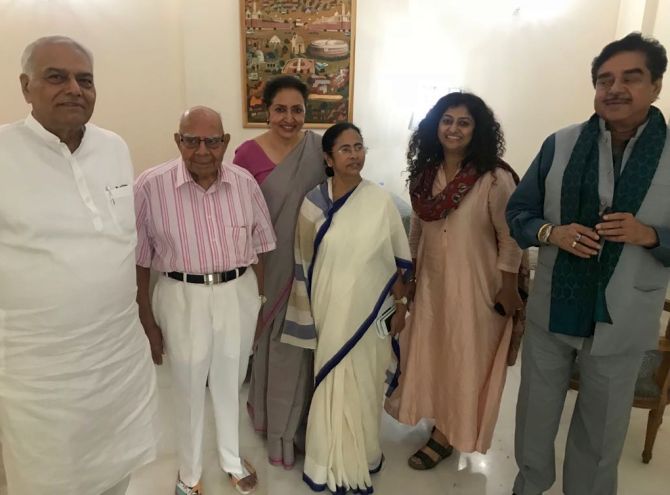 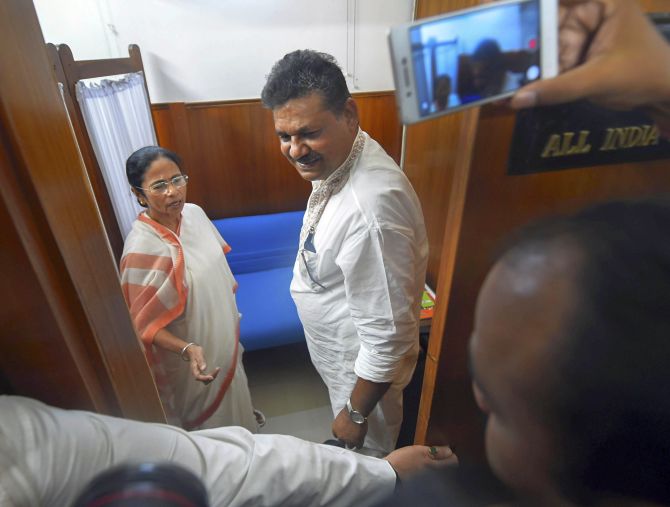 Suspended BJP member of parliament Kirti Azad met Banerjee and hailed her as a great leader, saying that her efforts to consolidate all opposition parties are "commendable". Photograph: Shahbaz Khan/PTI Photo 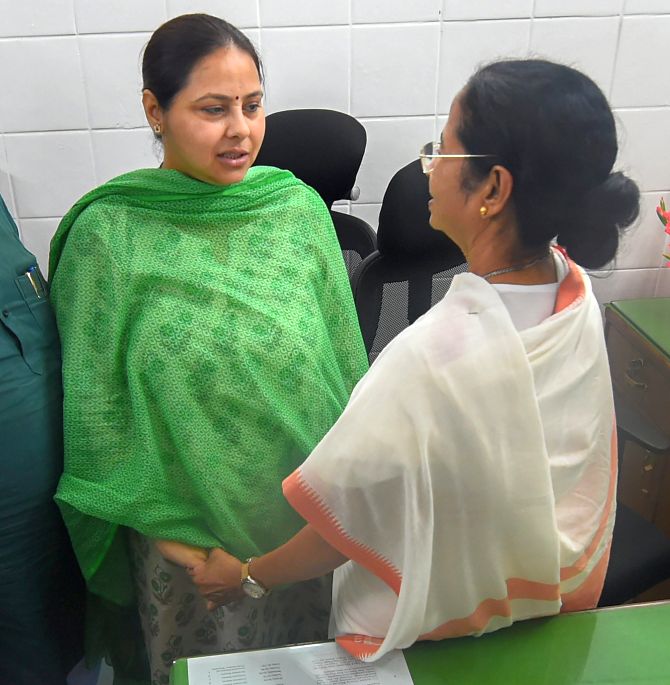 Rashtriya Janata Dal chief Lalu Prasad Yadav's daughter and member of parliament Misa Bharti also met Mamata. On her meeting with leaders of various political parties, the West Bengal CM said, "We know every political leader. I am happy to meet all of them." Photograph: Shahbaz Khan/PTI Photo 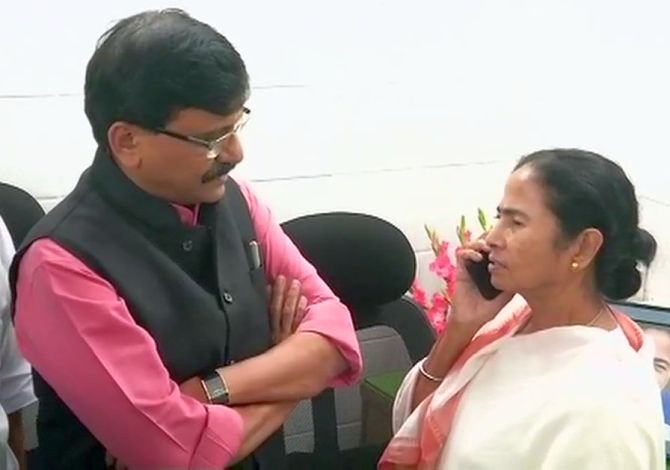 Interestingly, Banerjee extended an invitation for the Kolkata rally to Shiv Sena chief Uddhav Thackeray through Raut who said the party would take a decision on it. Though a constituent of the NDA, the Sena has been openly critical of the Modi government. Photograph: ANI 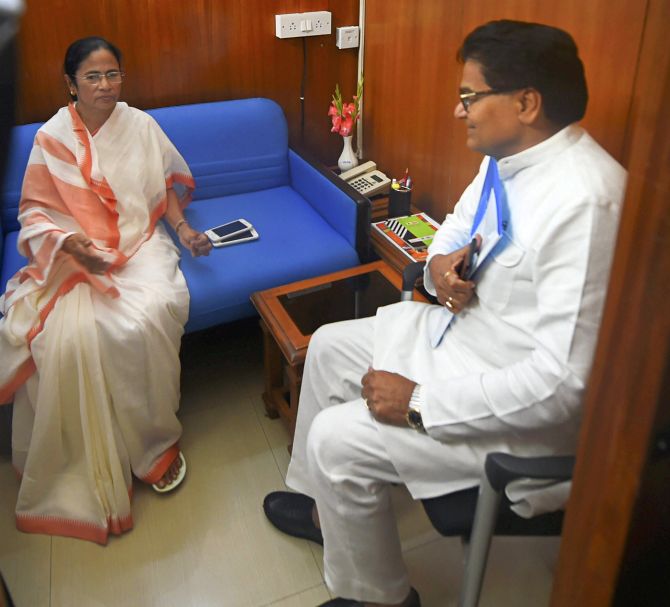 Mamata with Samajwadi Party MP Ram Gopal Yadav. Attacking the Centre on Assam's National Register of Citizens final draft, she said, "People whose names have been kept out are from Bihar, UP, Tamil Nadu, Gujarat, West Bengal. We want them to live peacefully. Some of them are living for 100 ears for five generations in Assam. How can you do this to them?". Photograph: Shahbaz Khan/PTI Photo 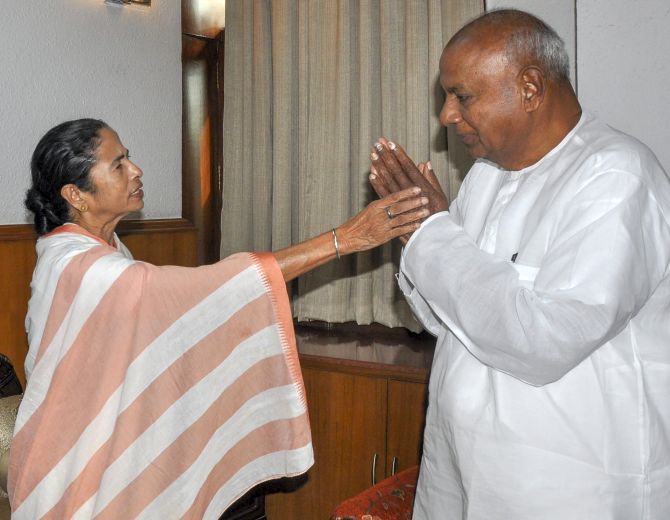 Why Mamata wants no PM nominee for united Opposition