As many as 51 'Govindas' were injured in Mumbai on Saturday during Dahi Handi celebrations, marking the birth of Lord Krishna, which remained subdued in the wake of floods in western Maharashtra. 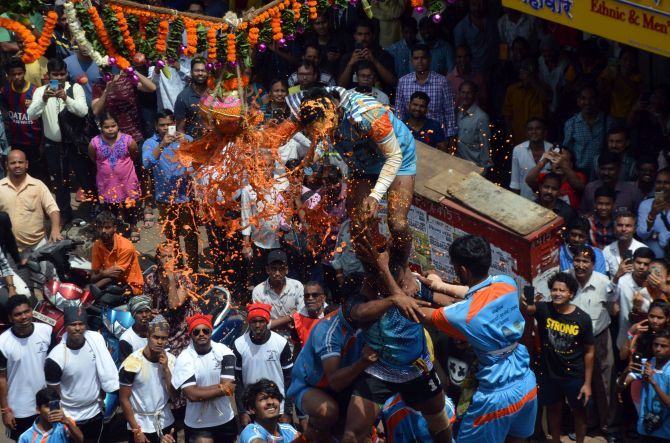 Most of the injuries occurred due to falling while setting up human pyramids to break the 'dahi handi' or curd pitcher, said a Brihanmumbai Municipal Corporation official.

The celebrations remained low-key in other parts of the state as well.

He said 27 of the 51 Govindas or revellers were discharged after primary treatment while rest remained admitted in 12 civic-run hospitals across the city. 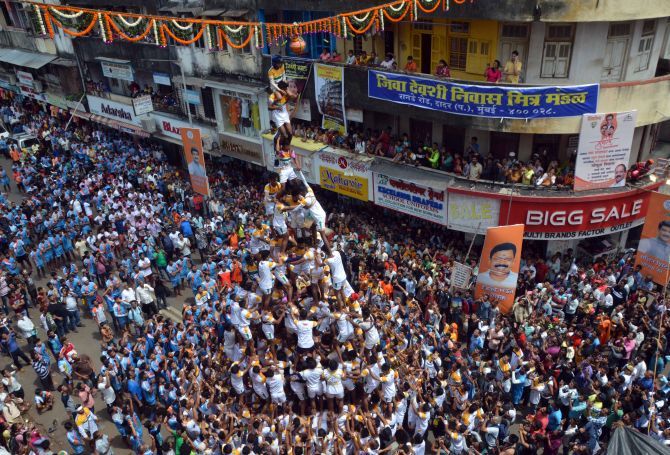 The usual fervour associated with the festival was missing this year as several dahi handi mandals and organisers of events decided to keep the celebrations low-key, to express solidarity with the people affected by the devastating floods.

Some of the mandals are also donating money for the flood relief work. 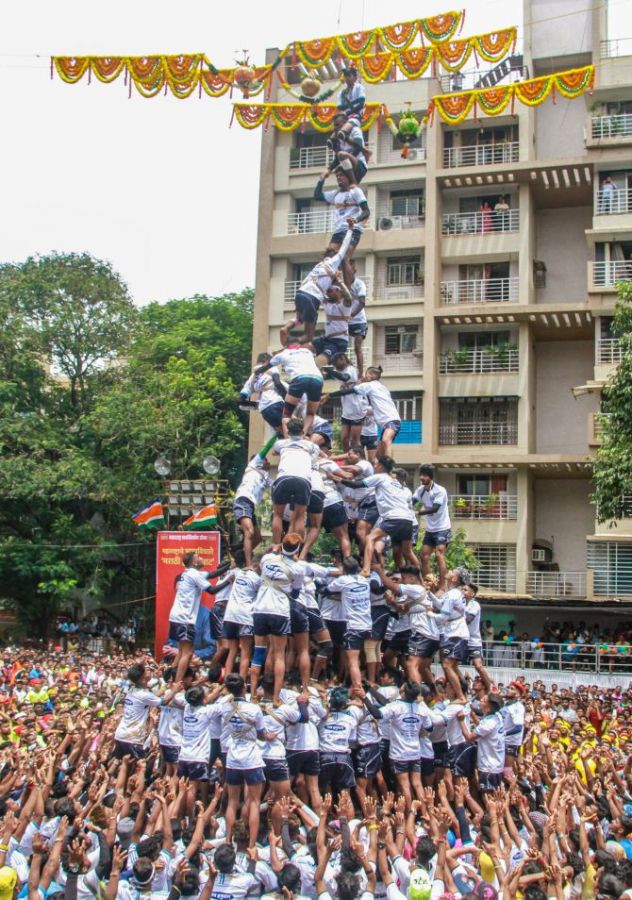 Gorakhnath Mahila Dahi Handi Pathak Mandal, an organisation of women Govindas, has decided to celebrate the festival just to keep the tradition alive. 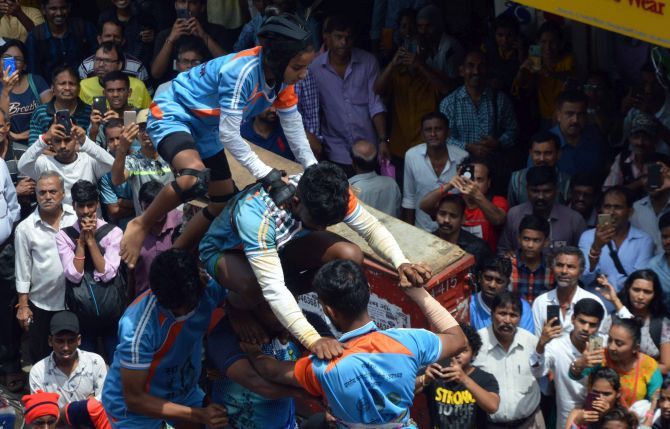 "We are going to celebrate the dahi handi festival, but not with usual fervour. We will celebrate it just to keep our tradition on. We cannot forget the hardships our brothers and sisters are facing in parts of state due to severe floods," founder of the mandal Bhau Koregaonkar said.

"Our women Govindas will reach the place and just break the pot," he added. 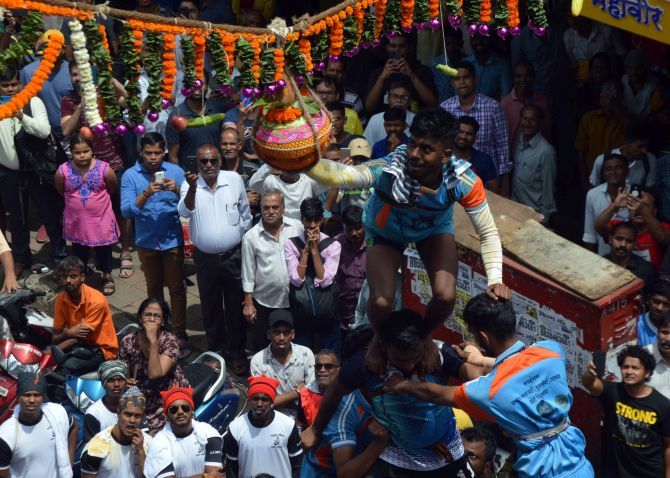 Bharatiya Janata Party leader Ram Kadam, who is known for holding grand dahi handi events, has also decided to celebrate the festival this year without any glitter.

"We will celebrate this festival as part of our culture, but it will be done in a simple manner. There is no need to splurge money and the saved money will be sent to help the flood-hit brothers and sisters of the state," he said. 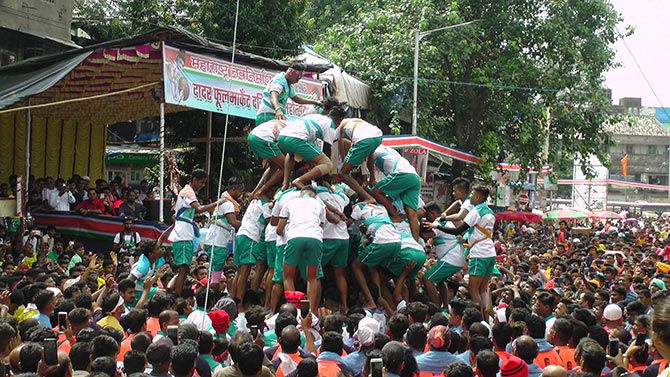 The Radha Gopinath temple of the Indian Society for Krishna Consciousness (ISKCON) at Girgaum celebrated the festival in a traditional style.

On their part, Mumbai Police warned revelers against making noise and tweeted a photo appealing them to not violate norms. 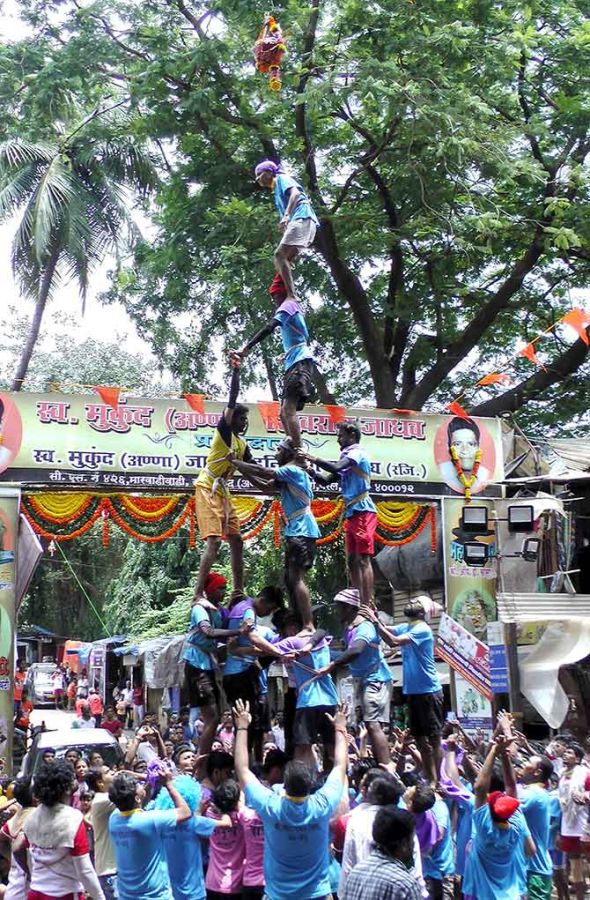 The disaster management cell of the BMC was on alert to deal with any eventuality, while hospitals were asked to keep medical staff on standby.

In the past, several Govindas were injured after falling off human pyramids. 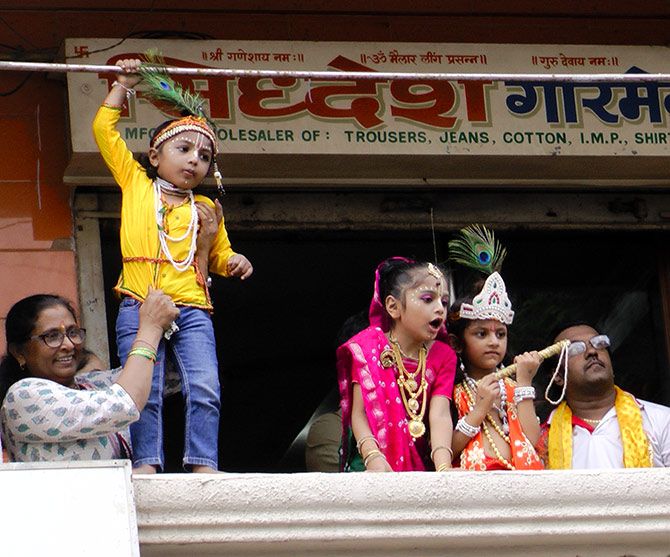 The handi was allegedly being put up by Maharashtra Navnirman Sena members. The Raj Thackeray-led party has been demanding that upcoming assembly elections in the state be held through ballot papers.

Police and the activists clashed when the 'EVM dahi handi' was being seized.

IMAGES: Various Govinda mandals and common people participate in Dahi Handi celebrations at different places in Mumbai. Photographs: Satish Bodas and Sahil Salvi
© Copyright 2020 PTI. All rights reserved. Republication or redistribution of PTI content, including by framing or similar means, is expressly prohibited without the prior written consent.