Social distancing norms, which were mandated by the government, were given a toss by people. 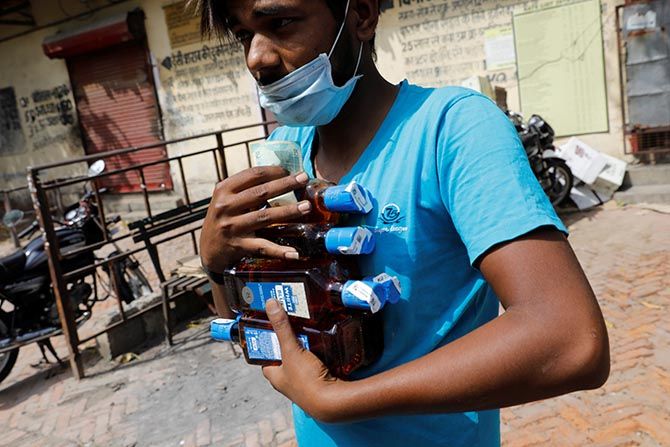 IMAGE: A man carries liquor bottles after buying them at a wine shop during an extended nationwide lockdown to slow the spread of the coronavirus disease in New Delhi. Photograph: Adnan Abidi/Reuters

Liquor shops in large parts of India reopened after almost 40 days on Monday and were shut again in several places as thousands of anxious tipplers broke social distancing protocol -- and some even coconuts -- in their eagerness to end the prolonged dry spell and say cheers again.

Extraordinary scenes of men, and in a few cases women too, standing in snaking queues for hours or joszling restlessly as they waited for the shutters to go up were replayed in Bangalore and Delhi, Mumbai and Lucknow, and in smaller towns and rural centres across the country. 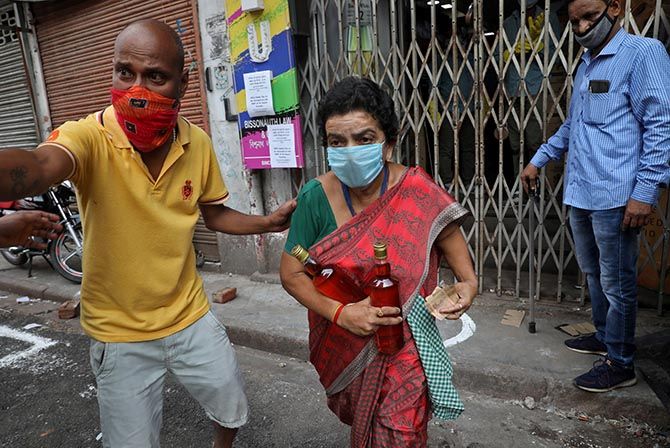 IMAGE: A woman carries liquor bottles after buying them at a wine shop in Kolkata. Photograph: Rupak De Chowdhuri/Reuters

As India entered the third phase of the lockdown and some curbs were eased, the cynosure of attention for those deprived their daily or weekly tipple was clearly the alcohol shops.

Coronavirus being the great equaliser, they stood together, the affluent and the not so, united in their urgency to stock up on their favourite tipple, be it single malt and pricey beers and wine, or humbler IMFL and country liquor.

But it didn't always go according to plan, the move to reopen liquor vends leading to chaos 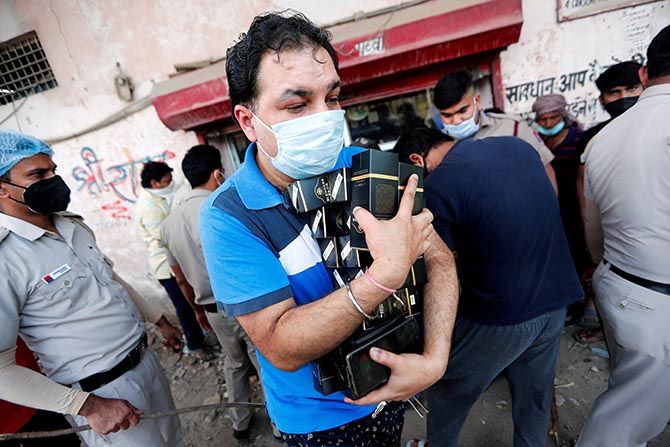 IMAGE: A man carries liquor after buying it at a wine store during an extended nationwide lockdown to slow down the spread of the coronavirus disease in New Delhi. Photograph: Adnan Abidi/Reuters

Like in Delhi, parts of West Bengal, Rajasthan and Andhra Pradesh where many liquor shops had to be shut just minutes after they opened as restless, edgy crowds milled around, forgetting all about social distancing norms necessary to ward off COVID-19.

In Delhi, an official said about 150 government-run liquor shops were allowed to open from 9 am to 6.30 pm in accordance with the latest lockdown relaxations given by the ministry of home affairs. 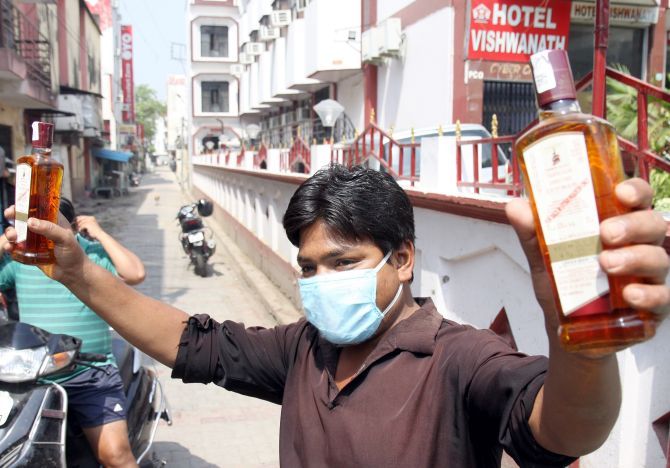 "Shops were asked to shut in places where social distancing norms were violated. At some places, mild force was also used to disperse the crowd," a senior police official said.

"A large number of people gathered even before the shop opened around 10 am and within minutes, we asked the liquor shop to shut," added a senior police official from Shahdara district about a shop near the Apsara border. 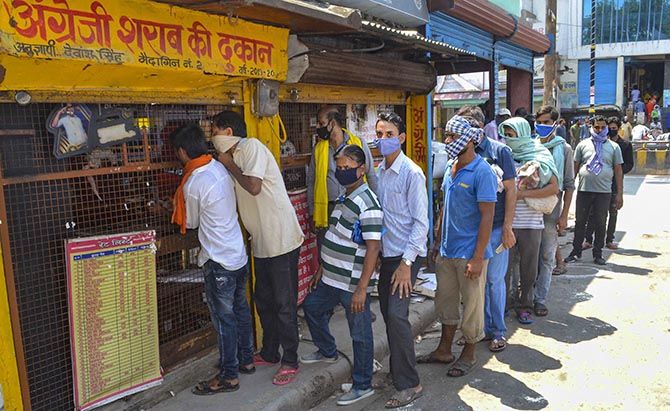 IMAGE: People purchase liquor from a wine shop which was opened in accordance with the newly relaxed guidelines of COVID-19 lockdown, in Varanasi. Photograph: PTI Photo

There were many who waited outside liquor shops but were not lucky enough.

"I will wait for the shops to reopen, " said Amit, who had come from Paharganj to the Gole Market area in central Delhi. The three shops were closed by police because of the rush but Amit, in his mid 40s, said he was determined to wait till he could get his hand on a bottle or bottles.

His doggedness found echo in far away Shivamogga in Karnataka.

"Liquor is good for health," 96-year-old Dakamma was heard saying. 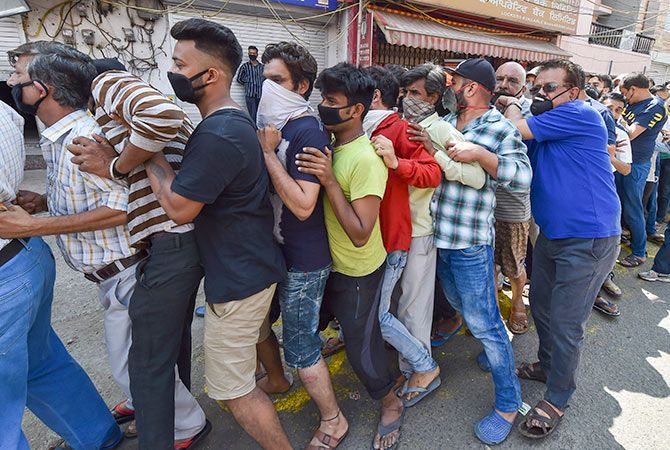 IMAGE: Customers forget social distancing norms as they queue up outside a wine shop in Prayagraj. Photograph: PTI Photo

Booze lovers in the southern state ushered in the resumption of liquor sales with a celebration, thronging stores many hours before the shutters went up.

At some places, they performed prayers with flowers, coconuts, incense sticks, camphor and even burst crackers in front of the stores.

About 4,500 standalone liquor outlets outside containment zones were allowed to be opened from Monday from 9 am to 7 pm with some restrictions.

Some came ready for the long haul -- with umbrellas, raincoats, newspapers and books and queued up as early as 3 am. 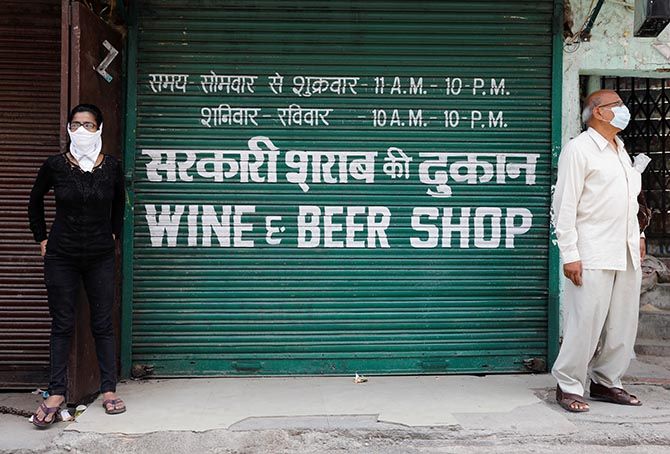 IMAGE: While many celebrated as liquor shops opened, these people had to keep waiting as this store didn't open. Photograph: Adnan Abidi/Reuters

At a liquor shop in Salegame Road in Hassan, they lit a traditional lamp and incense sticks, performed an 'aarti' with camphor and decorated the store with flower garlands.

And in Belagavi, eager buyers marked their spot on Sunday night itself, leaving slippers, bags and stones in "social distancing boxes".

In neighbouring Andhra Pradesh, the confusion was compounded by technical glitches in computers in government-run liquor outlets, causing abnormal delays in sales.

The crowd was so heavy that at a couple of places sales were suspended to maintain order. 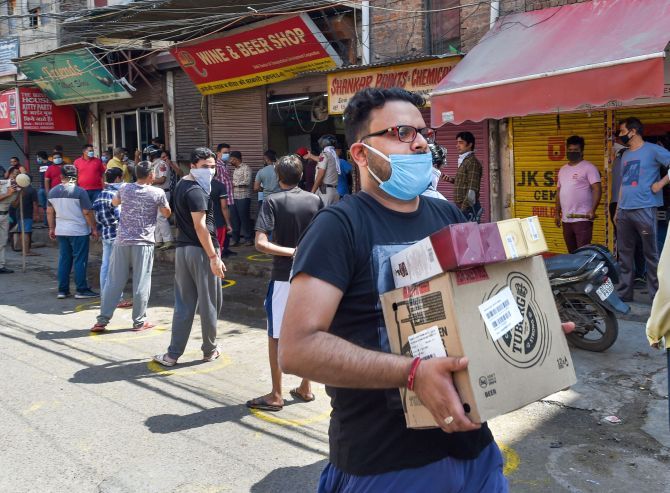 "We want our alcohol at any cost," said Sooraj Pawar from Mumbai's suburb Santacruz where there were long queues of people standing perilously close together, shuffling slowly towards the liquor shop but showing no signs that they were leaving.

There were similar scenes in Juhu where police tried to control the restless crowds. To the dismay of customers, many liquor vends in Maharashtra remained shut.

The confusion was apparently due to a contradictory communication from the excise department, a shop owner said.

A large number of people made a beeline in Uttar Pradesh that reopened 26,000 liquor stores, while Rajasthan had to close most shops where social distancing norms were not followed. 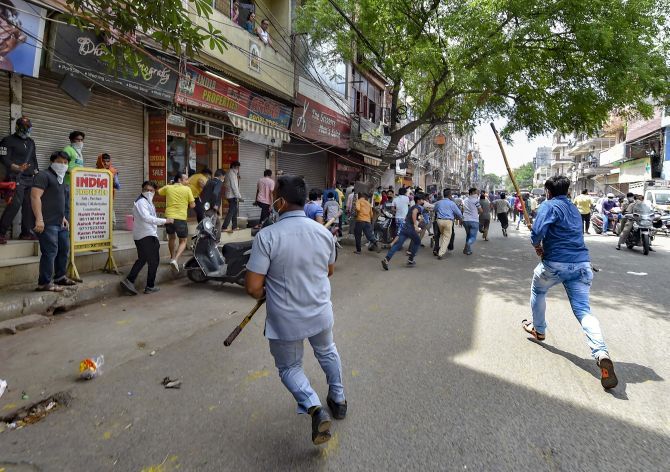 IMAGE: Police personnel raise their batons to disperse the crowd outside a wine shop after authorities allowed sale of liquor with certain restrictions at Chander Nagar in East Delhi. Photograph: Manvender Vashist/PTI Photo

In the Uttar Pradesh capital Lucknow, too, caution was abandoned as people gathered from early morning itself and bedlam reigned.

"There is an estimate that on the first day itself, the government is likely to earn Rs 100 crore as revenue," said Sanjay Bhoosreddy, principal secretary of the Excise Department.

There were similar scenes in many other parts of the state, including in Kanpur, Allahabad and Ballia, despite the administration in some places instituting a 'one bottle, one person' rule. 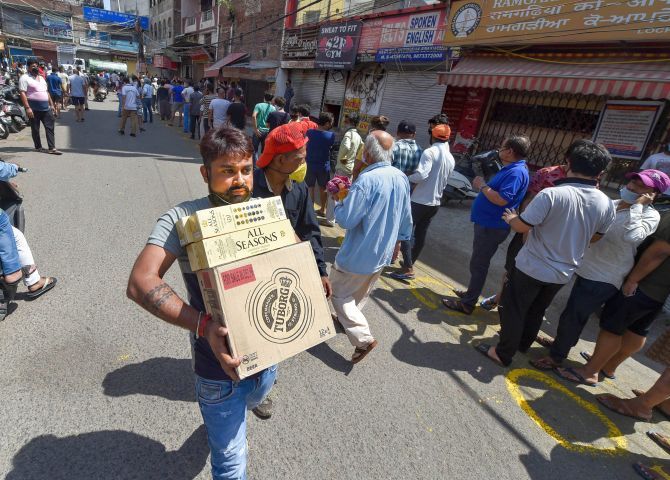 With carry bags in hands, liquor lovers lined up in long queues to purchase liquor after shops reopened in Rajasthan. Some were even seen with plastic sacks to carry the stock of liquor as much as they can.

The state excise department had to order some shops to be shut in laces where social distancing norms were not followed.

"What to do sir, this day has come after a long wait," was the heartfelt response of Shyam Sundar Sharma, a consumer waiting for his turn at a liquor shop in Jaipur.

Policemen were deployed near the shops to ensure that there is no crowd but at most of the places, crowd could be seen. 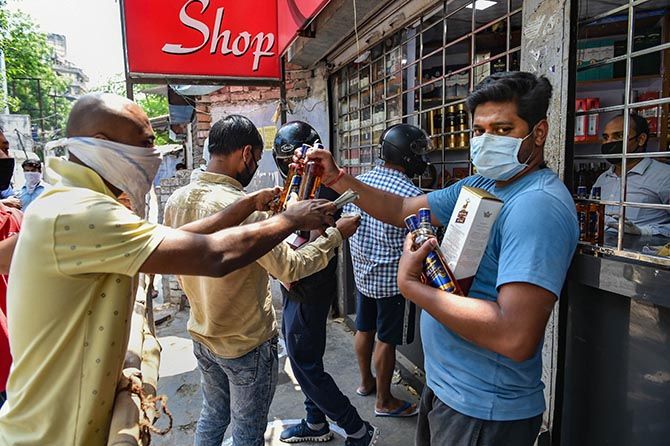 Many states increased the prices of alcohol but that didn't really matter for those who had been deprived of their daily or weekly drink, leading to mild annoyance for some and downright despair for others.

Standalone liquor shops in West Bengal reopened in green, orange and red zones, except in containment areas, but police closed down several within an hour as people started jostling with each other in front of the outlets with social distancing going for a toss.

Some states like Kerala and Madhya Pradesh kept liquor shops closed. They were closed in Puducherry too. The Tamil Nadu government has announced resumption of liquor sales from May 7.

According to All India Brewers' Association Director General Shobhan Roy, the liquor industry contributes around Rs 2.5 lakh crore to the exchequers of the state government.

"It is the revenue of Rs 250 lakh crore which the state government gets from the liquor industry. As liquor is only state subject, Centre does not get any say in that," he said.