Fear and anger were writ large on the faces of Kashmiri Pandit employees and their family members as they continued their protest on Saturday at the Sheikhpora transit camp in Jammu and Kashmir's Budgam district against the killing of Rahul Bhat and demanding their relocation to safer places outside Kashmir Valley. 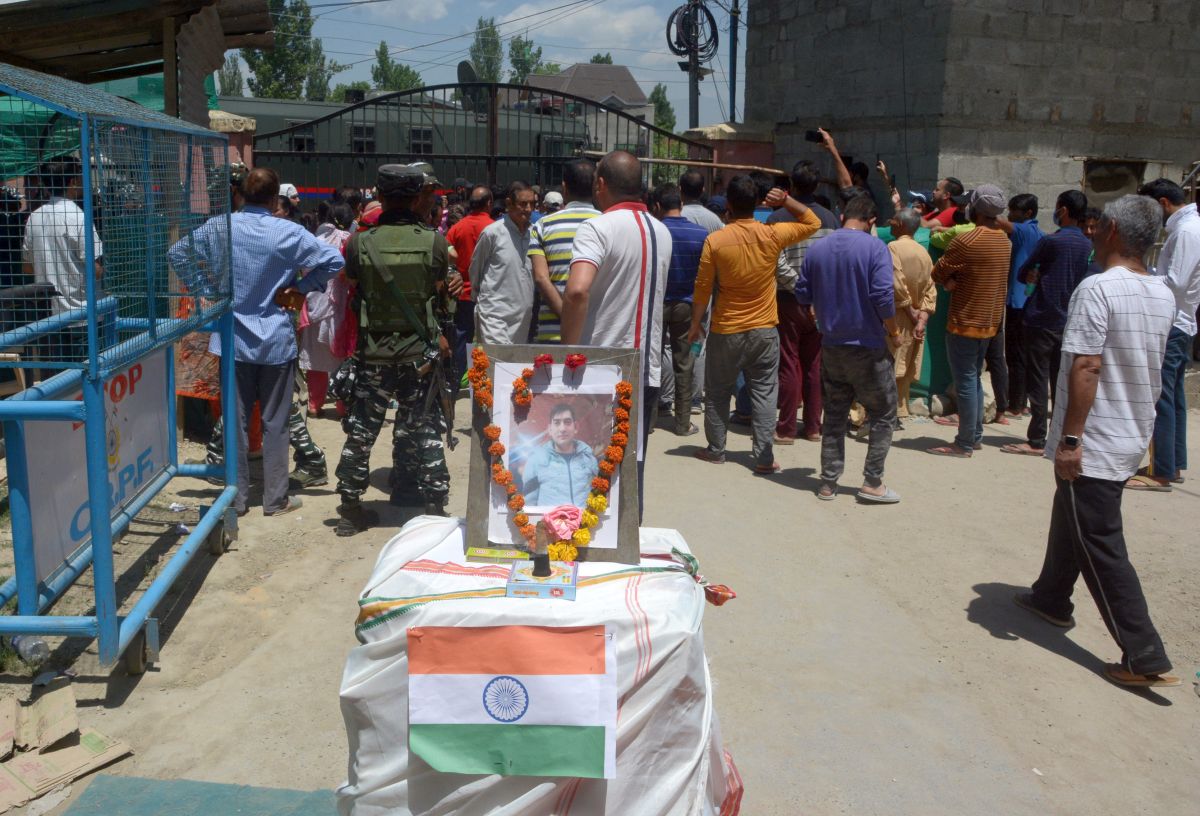 The camp, which houses the families of Bhat and other Kashmir Pandits who were employed under the prime minister's package in 2008, has become an epicentre of protests in the aftermath of the killing Bhat, who was shot dead by terrorists in his office in Chadoora on Thursday.

The protesters have been demanding their relocation to safe environments in the wake of a spurt in the attacks on the minority community members in the valley.

On Saturday, over a hundred employees -- men and women -- sat under a large makeshift tent, in order to protect themselves from the scorching heat prevalent across the valley, as they protested against Bhat's killing as well to press for the acceptance of their demands.

So far, they said, there were no visible signs of any resolution to the problems.

"This is the failure of both the central as well as the union territory governments. This is the ninth killing (of minority community members), we are facing huge problems, but there is no redressal,” Vimal, a Kashmiri pandit employee, told PTI at the camp.

He said for the migrant employees to work freely, a safe and secure environment should be created.

"There has to have fool-proof security arrangements for us to work. We cannot work like this and so, we are planning to submit mass resignations,” Vimal said.

On Friday, there were reports of mass resignations by the employees, especially in the militancy-hit south Kashmir, but the government dismissed those. Instead, it said, their service-related issues were being addressed in a time-bound manner within a week.

Vimal, however, said the government's intentions were not clear.

While many paid tributes to Bhat -- a photograph of his was placed on a table -- several others raised slogans against the government and the Jammu and Kashmir Police. A tri-colour also placed on the table. 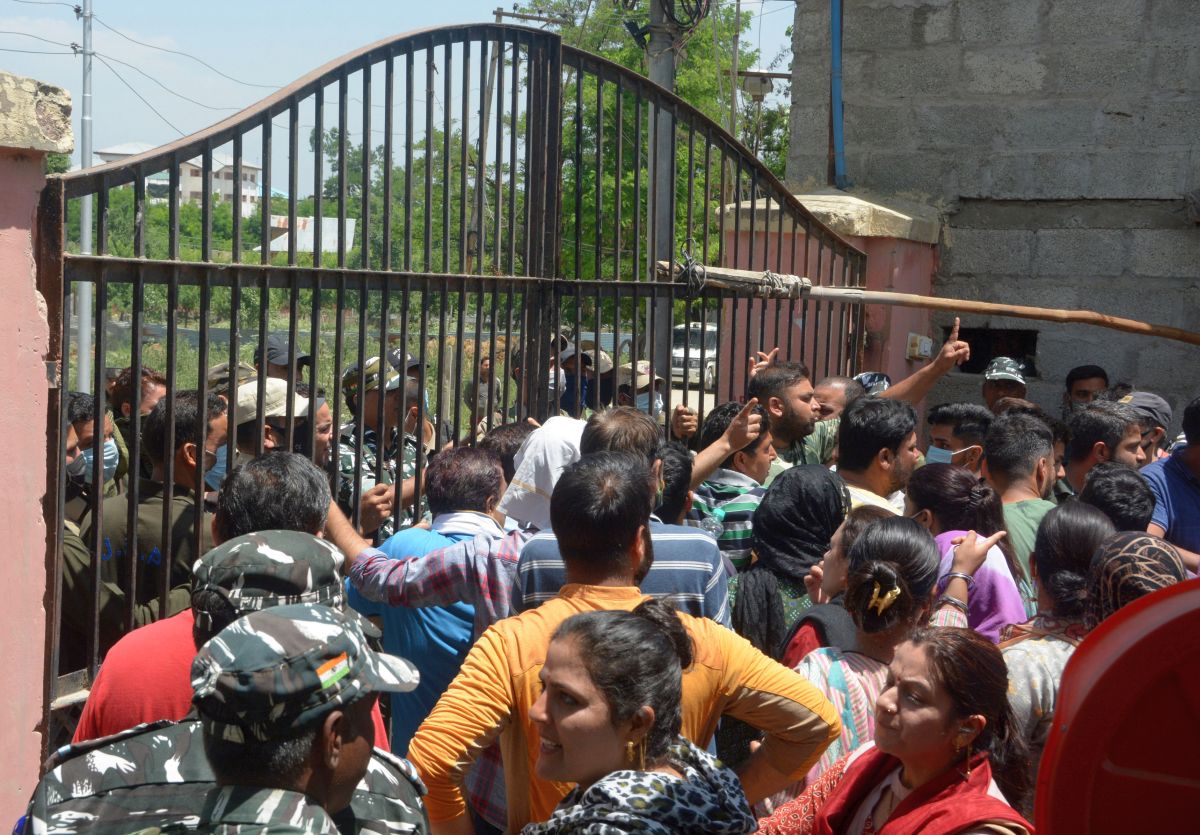 The protesters got up and rushed towards the main gate of the camp which has shut by the police since Friday night. The protesters tried to throw the gate open, but police prevailed. A police vehicle was also brought in front of the gate to stop the march of the protesters.

The employees -- who on Friday had sat on the main road connecting the district with Srinagar city as well as the airport -- said they were fooled by the police into vacating the road and were now “caged” inside the transit camp.

"We were removed from the dharna by the DIG (central Kashmir) on the assurance that the Lieutenant Governor will come to see us. However, the LG did not come. He sent his principal secretary, Nitishwar Kumar, instead around 11 pm,” Vimal said.

“He (Kumar) had no solutions, no redressal to our issues,” one of the employees said.

The community has a solution to their problems -- the government should temporarily relocate them to “safer places” till a secure atmosphere is created in the valley.

"For the time-being, two years, three years, we should be relocated...till the time they control the situation. They are not doing anything except telling us that there is no provision to relocate them,” another employee from the community, Aparna Pandit, said.

The Kashmiri Pandits said they have never come out on roads or raised their voice, but Bhat's killing has “shook us”.

“Do they want us dead? We will submit mass resignations as the government has totally failed because now employees are killed inside their offices. Where is the security?

“Why is there no provision for us to be transferred outside Kashmir? People can come from Bihar and Maharashtra to work here, but we cannot go outside,” she said. 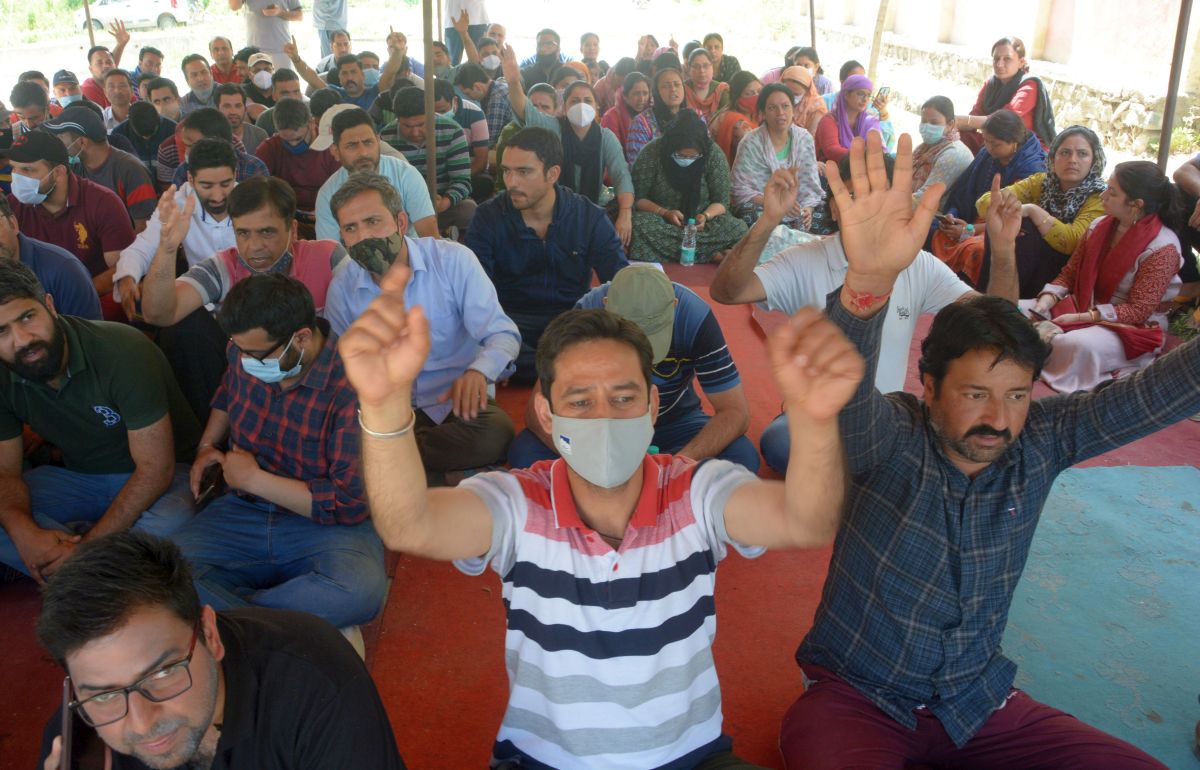 They claimed their problems will continue as the government was “making us sacrificial lamb”.

Another Kashmiri pandit, who did not wish to be named, said the government wants to create an atmosphere of fear.

“They do not want us to live happily here. We left our families, our children were living happily and studying well when they told us they will rehabilitate us. Is this what that rehabilitation is? Has Rahul Bhat been rehabilitated?” he said.

“Why are we not being allowed to go to press colony (in Srinagar) to protest Bhat's killing and to pay homage to him? Why are we being caged here? Are we stone-pelters? Are we anti-national elements, terrorists? We sat peacefully yesterday. The police is deliberately harassing us,” he said.

While the protest continued near the main gate, the whole transit camp -- which houses about 300 families -- presented a grim picture.

Many Kashmiri Pandits, especially the elderly, were busy with their daily chores, but none of them seemed to be at peace. Their faces betrayed their hearts which had, for so long, been longing to return to Kashmir.

Sheikh Suhail
© Copyright 2022 PTI. All rights reserved. Republication or redistribution of PTI content, including by framing or similar means, is expressly prohibited without the prior written consent.