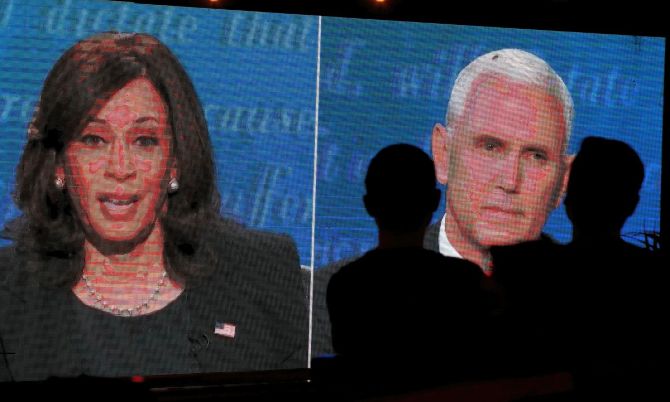 Harris, the Democratic Party's vice president nominee described the Trump's handling of the COVID-19 pandemic as the ‘greatest failure of any presidential administration in the history’ of America as she opened the vice debate with a sharp attack on Vice President Pence, who leads the president's coronavirus task force.

Wednesday night’s live debate at The University of Utah in Salt Lake City was a civil one between the two leaders, separated by plexiglass barriers, compared to last week's showdown between President Trump and his Democratic challenger and former vice president Joe Biden, which degenerated into insults and name-calling.

Pence, did not interrupt as much as Trump last week during the first presidential debate, but when he did Harris interjected: "Mr Vice-President, I'm speaking, I'm speaking."

During the 90-minute one-off debate before the November 3 presidential election, Harris, 55, and Pence, 61, stuck to their known campaign positions on major topics.

Pence, who entered the debate as an underdog, was seen vigorously defending the actions of the Trump Administration during the past nearly four years.

Harris, who scripted yet another history, by becoming the first person of Indian descent to be on the stage of a vice presidential debate, charmed with her smiling face throughout while responding to answers to Pence with facts and figures with the same assertiveness as she started her career as a district attorney in San Francisco.

"This administration has forfeited their right to re-election,” she asserted at the start of the debate moderated by journalist Susan Page from USA Today newspaper. 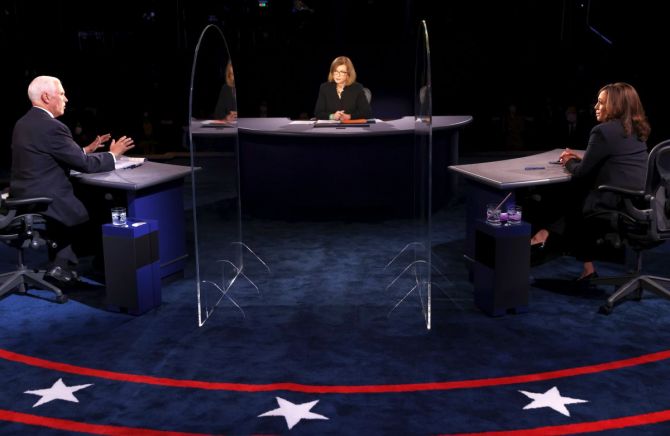 IMAGE: US Vice President Mike Pence speaks during the 2020 vice presidential debate with the Democratic vice presidential nominee and US Senator Kamala Harris on the campus of the University of Utah in Salt Lake City, Utah. Photograph: Justin Sullivan/Pool via Reuters

"Biden wants to go back to the economic surrender to China that when we took office, half of our international trade deficit was with China alone,” Pence fired back during the debate, which moved from one segment to the other every 10 minutes.

Harris slammed the Trump Administration for its handling of the COVID-19 pandemic as the country is now the world's worst-hit nation.

"The American people have witnessed what is the greatest failure of any presidential administration in the history of our country. And here are the facts, 210,000 dead people in our country in just the last several months. Over 7 million people who have contracted this disease. One in five businesses are closed...," she said.

Pence, who is heading the White House coronavirus task force, differed with her statement, asserting that Trump's plan saved hundreds of thousands of American lives, because with that time they were able to reinvent testing.

"The reality is, when you look at the Biden plan, it reads an awful lot like what President Trump and I and our task force have been doing every step of the way.

"And quite frankly, when I look at their plan that talks about advancing testing, creating new PPE, developing a vaccine, it looks a little bit like plagiarism, which is something Joe Biden knows a little bit about," Pence said.

Harris also accused Trump of ‘betraying our friends and embracing dictators’ as she attacked his ‘unilateral approach’ to his foreign policy that led to America pulling out of the landmark Iran nuclear deal and making the country less safer.

Trump administration has ‘stood strong with our allies’, Pence responded.

"We've strengthened our alliances ... and stood strong against those who would do us harm," Pence said, strongly defending his boss.

Pence alleged that Biden and Harris want to raise taxes, they wanted to bury the economy under a $2 trillion Green New Deal. 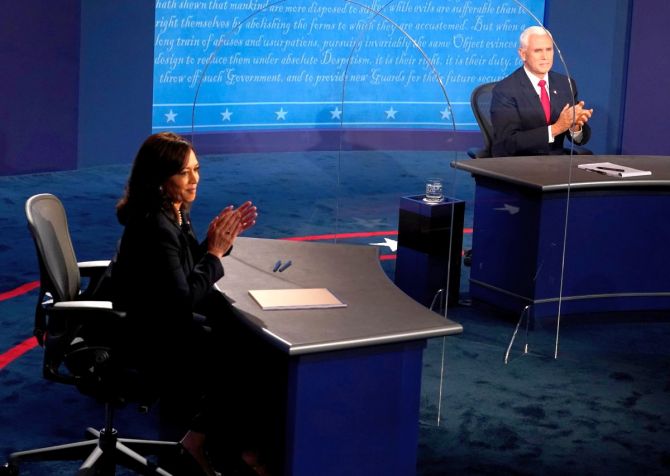 Harris deflected the questions on Green New Deal, to which the moderator said she had sponsored it in the Senate. However, she firmly asserted that former vice president Biden, would neither raise any taxes nor ban fracking if voted to power.

The Green New Deal is a proposed package of US legislation that aims to address climate change and economic inequality.

Harris asserted that the US under Trump has lost its trade with China.

"Lost the trade war with China? Joe Biden never fought it. Joe Biden has been a cheerleader for communist China over the last several decades,” Pence responded.

Harris alleged that the Trump administration's perspective and approach to China has resulted in the loss of American lives, American jobs, and America's standing.

Harris reiterated that a Biden Administration would join the Paris Agreement on climate change.

"The climate is changing. We will follow the science,” Pence said.

Defending her argument that the Supreme Court nominee should be announced by the winner of the elections, Harris referred to the remarks of Abraham Lincoln in which the great American leader had argued the same.

Harris accused the Trump Administration of not appointing a single Black among the 50 people appointed to the Court of Appeals for lifetime appointments.

The US needs reform of the policing and criminal justice system, she said.

On the question of racial justice, Pence expressed shock at the killing of George Floyd in Minnesota. But he added: "There is no excuse for the rioting and looting that followed."

He said Biden and Harris' claim that America is systemically racist and that police have an implicit bias against minorities is ‘a great insult’.

Harris said, "Last week the president of the United States took a debate stage in front of 70 million Americans and refused to condemn white supremacists."

"Not true, not true," said Pence, arguing that when Harris was a prosecutor in San Francisco, African Americans were more likely to be prosecuted for minor drug offences than whites or Latinos.

Trump's challenger, Biden tweeted, 'KamalaHarris, you made us all proud tonight.'

More Americans said Harris did the best job in the vice presidential debate, according to a CNN Instant Poll of registered voters who watched.

About six in 10 (59 per cent) said Harris won, 38 per cent said Vice President Mike Pence had the better night.

The CNN post-debate poll was conducted by telephone and includes interviews with 609 registered voters who watched the vice presidential debate.